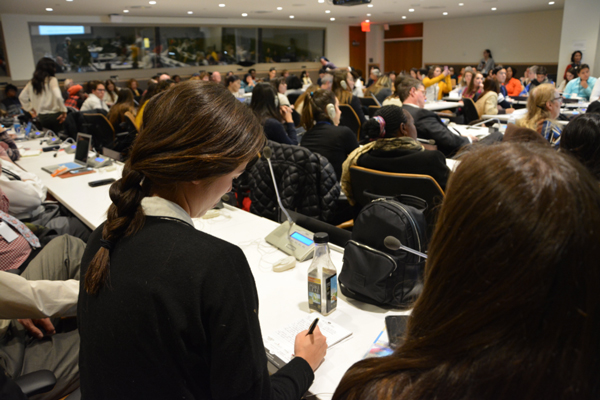 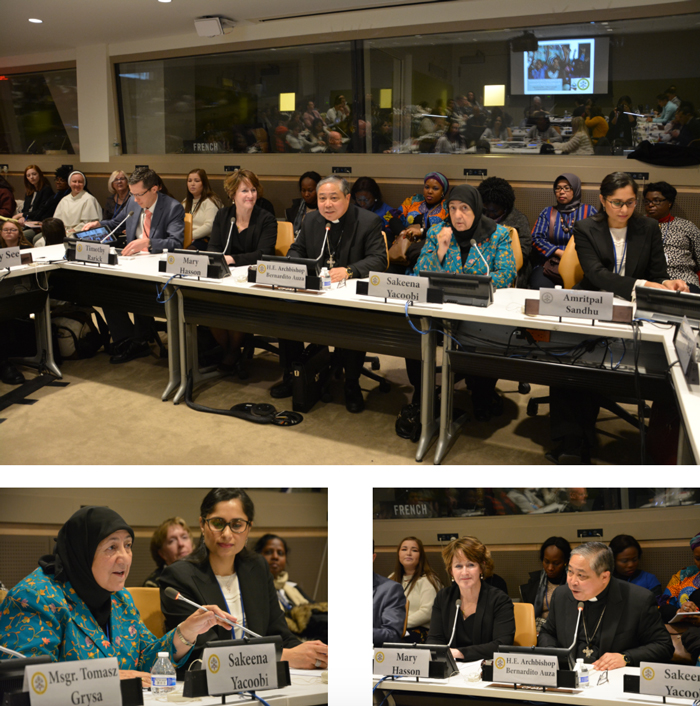 While women and girls are filling classrooms in urban cities, rural women and girls, as well as those situations of conflict and natural disaster, are often left behind, according to experts at a Holy See event.

On March 15, the Permanent Observer Mission of the Holy See to the UN sponsored an event entitled “Integral Education of Rural Girls and Women,” together with the Catholic Women’s Forum of the Ethics and Public Policy Center, the Universal Peace Federation and the initiative Education Cannot Wait to highlight best methods for enabling women and girls to access quality education that doesn’t stop at teaching her valuable skills, but also her inherent value.

The event was held in a standing and floor-sitting-room-only Conference Room 11 at the United Nations.

Archbishop Bernardito Auza, Permanent Observer of the Holy See Mission to the UN, highlighted the impact the Catholic Church has made in educating children, especially girls from from poor families.

“Thousands of Catholic women’s religious orders were founded with the explicit purpose of educating girls at a time when none but the richest girls with private tutors received any formal education at all,” he said. “Many of these women religious left their homes and traveled to far away countries in order to found schools in remote, rural villages where schools had never before existed.”

Archbishop Auza highlighted the vast number of men, women and children the Catholic Church educates, regardless of their faith or socio-economic  background: 68 million students –with more than 30 million girls–  worldwide are currently receiving an education through Catholic institutions.

Quality education for the Church does not end at teaching mathematical and writing skills to the future work force, but is aimed at building students who flourish, out of respect for each students’ inherent dignity. This “integral education” strives to create not only “intelligent adults but genuinely good persons,” he said.

Mary Rice Hasson, from the Ethics and Public Policy Center in Washington, D.C.,  also emphasized that the right to quality education should not reduce the worth of women and girls to her ability to contribute economically, while failing to recognize her worth.

“Equal dignity is what gives a girl the right to an education,” Hasson said. “Not because she is useful or can make money for the family. Those are good things, but that is not why she deserves an education.”

While progress has been made for many women around the world, evident by data from various reports like the Global Education Monitoring Report, which reveals increases in women and girls’ access to education globally, including instances in which they outnumber their male counterparts, there are still many gaps, especially among those in rural areas and living in poverty.

“There are many women many girls who are receiving education who had no hope of one even a decade ago,” she said. She suggested that practices that hinder a woman’s access to education fail to recognize her dignity and are harmful for women and society as a whole.

To keep girls in school there must be trust between families, governments, and non-governmental organizations, she said, citing an example of broken trust when an NGO that was brought into Kenya privately taught girls counter-cultural practices that the girls, their families and the government found offensive. She suggested that families are wary to send their girls to school if they are skeptical that the curriculum will comprise their values.

Amritpal Sandhu, Education and Gender Advisor at Education Cannot Wait, said the one in four children who live in crisis-affected situations, such as conflict or climate disasters, are drastically left behind. This happens especially with girls, who are 2.5 times more likely to be out of school than girls in more stable situations. This gap increases to 90 percent when girls reach adolescence.

“The ideal way to solve the problem of girls and boys who have been deprived of education in emergencies would be to stop conflict and stop the climate issues,” Sandhu said. Noting that not all of these are controllable, she advocated for increasing education funding in humanitarian crises areas. “We must view education as a life-saving intervention.”

Twenty-five years ago, Sakeena Yacoobi, CEO of the Afghan Institute of Learning, had the same thought while conducting research at a refugee camp. Yacoobi encountered devastated women who did not recognize their worth and she realized the only difference between herself and her “sisters” was that she had received a quality education in the United States.

“Education was the key. It gave me self-power,” she said. She began to set up community schools by first training trusted members of the community.

“In the first three months we had 7 kids set up in school,” she said. “But in a year we had 15,000 students.” Since 1995, she has helped educate 10 million Afghans, including during the Taliban’s reign when many of her schools were forced to go underground.

“I’m glad we had those kids in school because right now they are the ones running the country,” she said.

After seeing an alarming trend among her students and their families who thought a sixth-grade education was sufficient, she also set up learning centers for women of all ages to acquire the skills they need for employment through an accelerated curriculum.

“I knew these girls are going to be mothers of the nation, providing stability,” she said. “Is reading and writing enough? They need quality education. It will be moral, it will be family-respective; an education that really gives them a skill so they will really be able to provide for themselves.

Dr. Timothy Rarick, Professor in the Department of Home and Family at BYU Idaho, said that an integral part of a girl's education comes not merely from classroom instruction, but from their family relationships and particularly the one a girl has with her father.

There are external ways to empower women and girls like clearing barriers to education and employment, Dr. Rarick said, but it is equally important to empower them internally by strengthening their confidence to make choices; the role of fathers in this area is key, and often missing from mainstream dialogue on empowering women and girls.

A father of three girls and a son, he anecdotally demonstrated this point through his own experiences with his daughters, even tearfully reading a thank you letter he received from his pre-teen after a father-daughter dance. But he also sought to demonstrate it through data.

His research shows that daughters who have loving, respectful and active relationships with their fathers while growing up have advantages in other areas. Studies found that they are less likely to abuse drugs and alcohol, be imprisoned, develop an eating disorder or be overly dependent on men, and are more likely to find success in work and school.

“We need to broaden our lens of girl’s empowerment to include the family,” he said. “If an idea minimizes fathers it minimizes girls.” 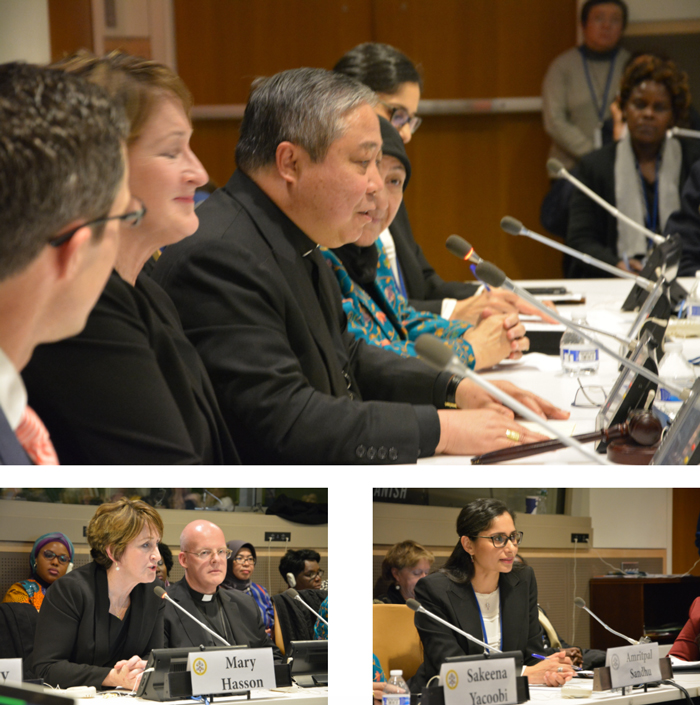 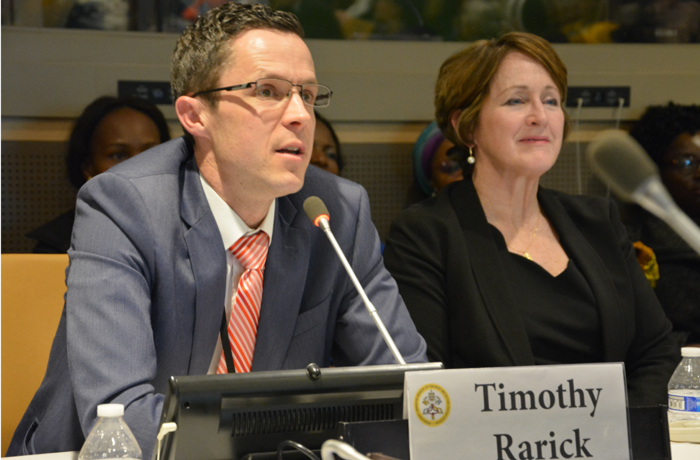