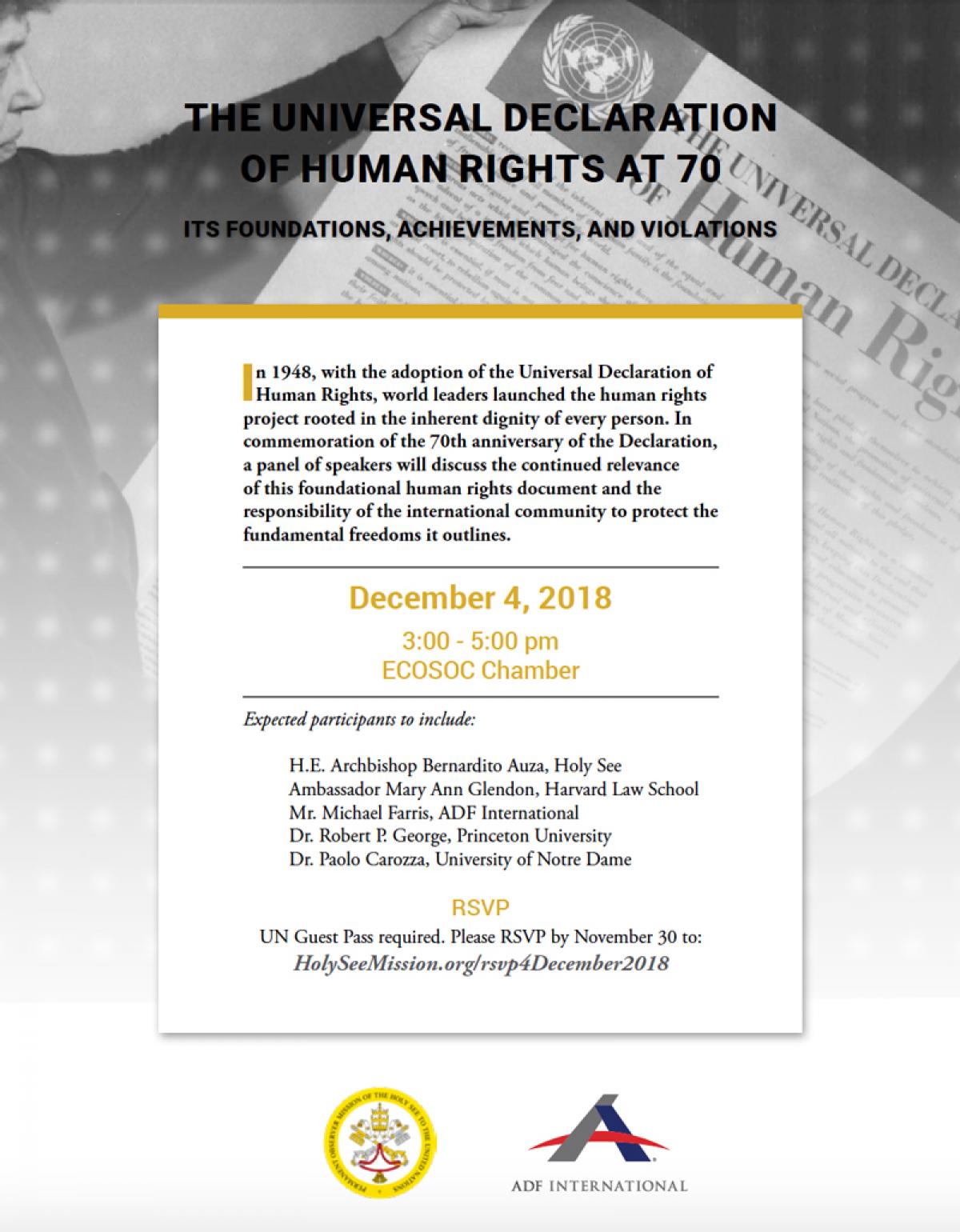 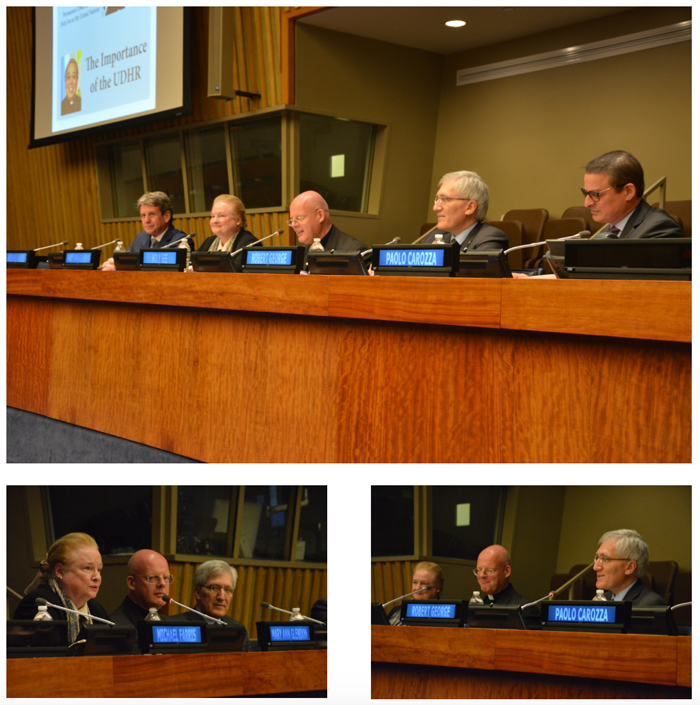 Experts celebrate 70 years of the Universal Declaration of Human Rights, but also note its shortcomings and express concern about violations of the rights it enumerates.

On December 4, Permanent Observer Mission of the Holy See to the United Nations, together with Alliance Defending Freedom International, held an event entitled “The Universal Declaration of Human Rights at 70: Foundations, Achievements and Violations” at the United Nations in New York to celebrate the Universal Declaration of Human Rights (UDHR), which was adopted by the international community on December 10, 1948, as one of the great achievements in the history of the United Nations and to reaffirm its importance and recommit to promoting and defending the rights, fundamental freedoms and responsibilities it articulates.

The opening remarks of Archbishop Bernardito Auza, were read by Msgr. Tomasz Grysa of the Holy See, since Archbishop Auza was in Katowice, Poland, representing the Holy See at the 24th Session of the Conference of Parties to the United Nations Framework Convention on Climate Change.

In his remarks, he noted that Pope John Paul II called the UDHR the “fundamental document” and “basic inspiration and cornerstone of the United Nations Organization” when he spoke to the General Assembly of the United Nations in 1979, but also emphasized that the rights listed in the UDHR are, “practical, made to guide action.”

“Its genius was that it was drafted to be relevant to all peoples in a pluralistic world and permitted diverse cultures, institutions and legal systems to converge around a fundamental nucleus of values, transcending divisions and appealing to our shared humanity,” he said. The focus on anthropology is one of the document’s greatest attributes.

“The framers were able to speak about human rights because they had a rich, objective notion of what it means to be human,” he said.  “There is a contemporary temptation to accentuate the word ‘rights' while neglecting the even more important word ‘human,' but human rights are premised on the existence of a nature objectively shared by all members of the human race by the very fact of their humanity.”

He echoed the concern of Pope Francis that the language of human rights are being used to advance newly claimed rights that are not agreed upon in international treaties and bodies, and in many cases reinterpret the Declaration in ways contrary to the rights initially defended.

Michael Farris, President and CEO of ADF International, said that many operators of the international human rights system can sometimes pose the greatest threat to the upholding of human rights.

For example, while the UDHR states that “every human being has the inherent right to life,” some parties are pushing to define new rights that directly contradict the right to life, such as a “right” to abortion and euthanasia, he said.

“Those who are inventing supposed ‘rights’ that contradict the real rights recognized in the UDHR are taking a jackhammer to the foundations of international human rights law,” Farris said.

Because there are many criticisms to hijacking of meaning of true human rights, some people are skeptical of the term “human rights” and no longer find it useful, he added.

“We must be alert to that the possible hijiacking of that word to agendas that are quite contrary to human rights,” Dr. George said.

He said that protecting basic human rights “is an intrinsic aspect of the good of human persons—an integral dimension of our overall flourishing.” Among these foundational human rights is the right to religious liberty and belief.

“Religious liberty that religion is yet another irreducible aspect of human well-being and fulfillment—a basic human good,” he said, and called for the protection of all humans to be free to raise existential religious question and  fulfill “what one sincerely believes to be one’s duties in the light of those answers are all parts of the human good of religion—a good whose pursuit is an indispensable feature of the comprehensive flourishing of a human being.”

Religious liberty, he said, should be respected by all governments and societies, regardless of the creed, so long as the practice that flows from that liberty respects fundamental human rights. This includes protecting the minority faiths such as Judaism or Islam in a predominantly Christian country, or Christianity in a predominantly Islamic country.

“To respect people, to respect their dignity, is to, among other things, honor their rights, including, to be sure, the right that we are gathered today to lift up to our fellow citizens and defend, the right to religious freedom,” he said. 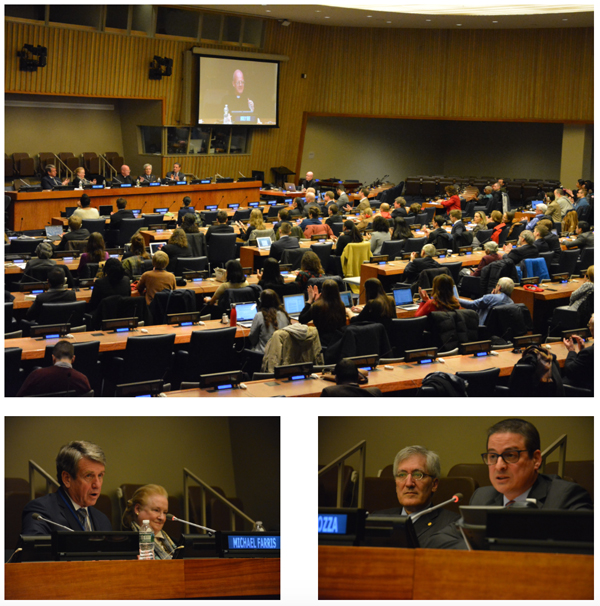 On the “dark side” of the institutionalization of human rights is the fact that they are not always interpreted and applied in the context of local traditions and beliefs, which can sometimes lead to a small number of ideologically oriented groups pushing their views on countries as a package deal with development aid and other humanitarian efforts. This is what Pope Francis has called  “ideological colonization,” when as a precondition to accepting international aid countries are pushed to accept ideological conditions  that oppose the values and traditions of the local communities.

But even with the imperfections of its implementation mechanisms, Carozza is still a hearty defender of the UDHR, and called for its implementation to be strengthened through four principles: modesty, subsidiarity, pluralism and accountability. Essential core rights should be respected first and foremost and carried out at a grassroots level, respecting local customs and culture, while also being subject to scrutiny of the international community when human rights are breached.

“We should be less interested in constantly expanding and creating new rights than in securing the essential core that we can all agree constitute unambiguous attacks on human dignity,” he said. “Let institutions be a catalyst to our own political dialogue and growth in understanding, not a distant elite to whom we delegate, by default, the most fundamental questions of public ethics in our societies.”

“It is important that states are critical of the perpetual concerns around human rights, while also committing, not to undoing the rights, but to improving them,” he said.

While there are some criticisms to the UDHR and the way it is interpreted and implemented, Ambassador Mary Ann Glendon, former U.S. Ambassador to the Holy See and Harvard Law School Professor, said that the Declaration came to be because of a determined group of diplomats who were horrified at the injustice of the recently ended Second World War and who decided the U.N. Charter would reflect a serious commitment to the protection of human rights. The UDHR flowed from that commitment in the U.N. Charter.

“The men and women who built those principles into the Declaration were not starry-eyed idealists,” Ambassador Glendon said. “Nearly all of them had lived through two world wars and severe economic crises.”

The document, she implied, did not consist of empty words, but of commitments that fueled some of the greatest accomplishments in human rights.

“It became the rallying cry of movements that helped to hasten the demise of colonialism, bring an end to apartheid in South Africa, and topple the seemingly indestructible totalitarian regimes of Eastern Europe,” Ambassador Glendon said.

While the document has led to major advances in upholding human dignity  and rights around the world, the international community has a long way to go to realizing all of the human rights listed in the Declaration. The current generation has a particular responsibility to uphold the principles listed in the UDHR.

“Seventy years from now, people not yet born will form opinions about our stewardship of that legacy,” she said. “How, I wonder, will we measure up?”

To watch the event in its entirety, click here.
To read Archbishop Auza's full remarks, click here.
Additional coverage by Crux can be found here.