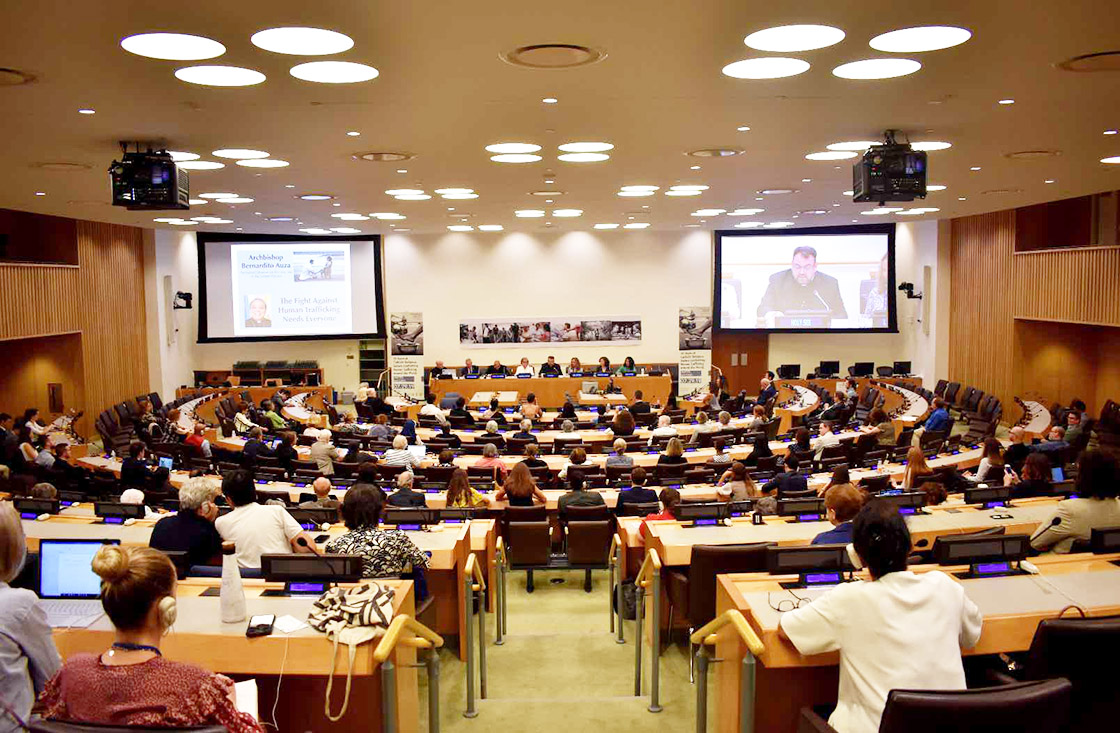 Faces in the Fight Against Human Trafficking 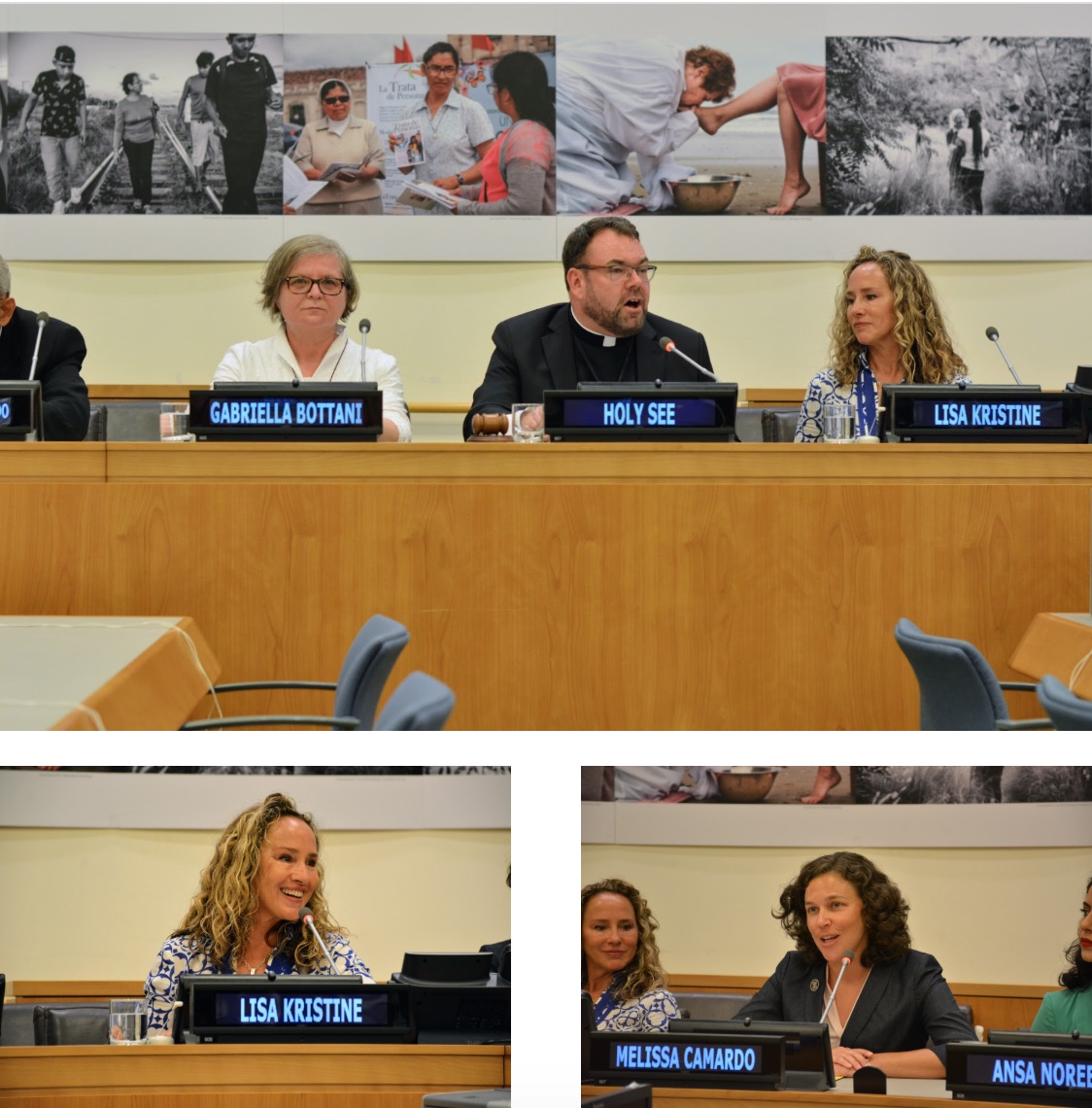 On July 29, the Permanent Observer Mission of the Holy See to the UN hosted an event entitled "Faces in the Fight Against Human Trafficking” at UN Headquarters in New York. It took place alongside a photography exhibition marking the tenth anniversary of the Talitha Kum Network and in commemoration of the World Day Against Trafficking in Persons.

Monsignor David Charters delivered the opening remarks on behalf of the Apostolic Nuncio Archbishop Bernadito Auza and moderated the discussion panel. Human trafficking is "one of the darkest and most revolting realities in the world today" he said, and an industry that "ensnares 41 million men and women, boys and girls," citing the words of Pope Francis, who has repeatedly described human trafficking as “open wound on the body of contemporary society” that “exceeds the competence of any one community or country” in the fight against it.

The panelists for the evening were Lisa Kristine, the photographer of the ‘Nuns Healing Hearts’ exhibit, Sr. Gabriella Bottani SMC, coordinator of the Talitha Kum Network International,  Sr. Melissa Camardo SCL from LifeWay Network’s Safe Housing Program, Ansa Noreen an alumna of LifeWay Network, and Bishop Marcelo Sánchez Sorondo, Chancellor of the Pontifical Academy of Sciences and the Pontifical Academy of Social Sciences.
Msgr. Charters stressed the need to “liberate, rehabilitate, and reintegrate those ensnared by modern forms of slavery.” In this regard, he said that “the work of Catholic religious sisters across the globe” could not receive enough attention as they tirelessly work to restore the dignity of those trafficked.

The photographer of the exhibition, Lisa Kristine, provided background to how she came to “document the plight of victims of human trafficking” by “bearing witness to modern slavery” through the medium of photography. Through her exhibition “Nuns Healing Hearts,” which was displayed at the Vatican in May, she shared the stories and images of those she encountered, documenting the lives of people enslaved in sex trafficking and in forced labor situations in brick kilns, brothels, the fishing industry, and gold mines.

She deplored those who only value “the profit of the slave” and was grateful to have been able to document “the sheer courage of the Talitha Kum nuns around the world” in responding to the scourge.

Alsa Noreen described Lisa Kristine's stories as “amazing and at the same time heartbreaking,” whilst highlighting how forced marriages can also be a form of trafficking. Noreen grew up in Pakistan where she was educated and employed in fashion design. After coming to the United States, she herself escaped from trafficking and received training in tech and web development. She hopes that the UN can increase efforts to combat this form of modern slavery.

Sr. Gariela Bottani, international coordinator of the Talitha Kum network, offered insights into the life-changing work of Talitha Kum and spoke of the need to “overcome borders and whatever is dividing us.” She explained how the network “promotes initiatives against trafficking in persons in their particular contexts and cultures” in order to “bring women together and give them the possibility to share, speak, and find out how to get involved against human trafficking.”

Bottani explained how she has been “walking together towards long term freedom” with many survivors of human trafficking. The implementation of anti-trafficking laws, the eradication of the root causes of trafficking, and the need for cooperation and collaboration all pose challenges in the fight against trafficking, she said.

In human trafficking we can see, he said, “the wounds of humanity today,” describing human trafficking “a new crime against humanity as it’s a new form of slavery” that prevents people from developing authentic relationships and enjoying civil rights. He described how climatic changes that force people to migrate makes them far more vulnerable to trafficking.

Sr. Melissa Camardo spoke of the deep relationships that have formed between Catholic religious and trafficking survivors. She used the story of Jesus and Zacchaeus as an analogy for how the sisters and survivors “walk the road together, passing through the grumbling crowds, and embracing a new freedom.” Encounter and accompaniment, she said, are the "cornerstones of the anti-trafficking movement.”

She spoke of Noreen’s transformative journey since she escaped human trafficking. She also recounted how, together, they were able to “smooth the rough edges and cracks into channels for love and joy to flow more freely than ever before.” 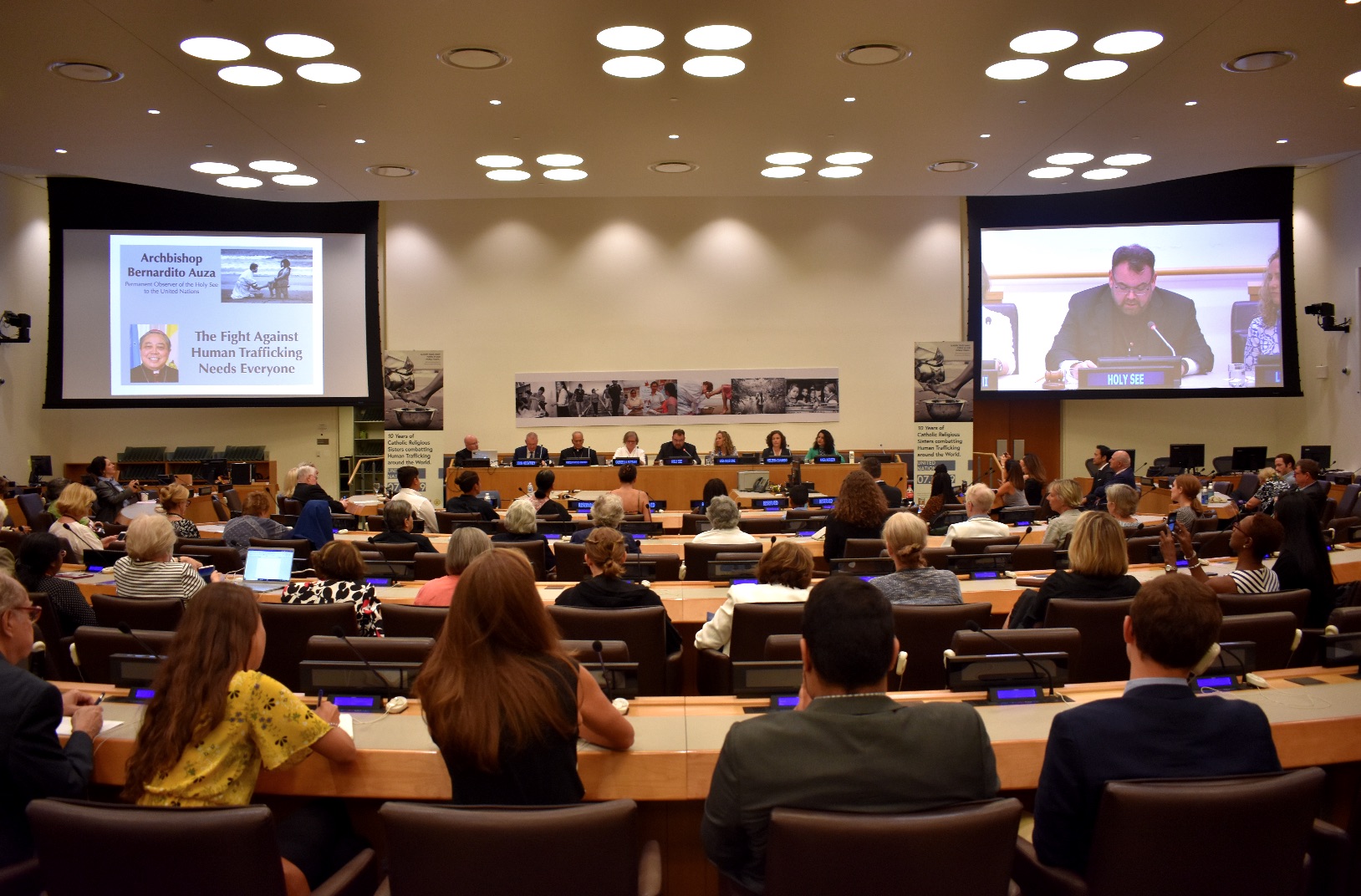