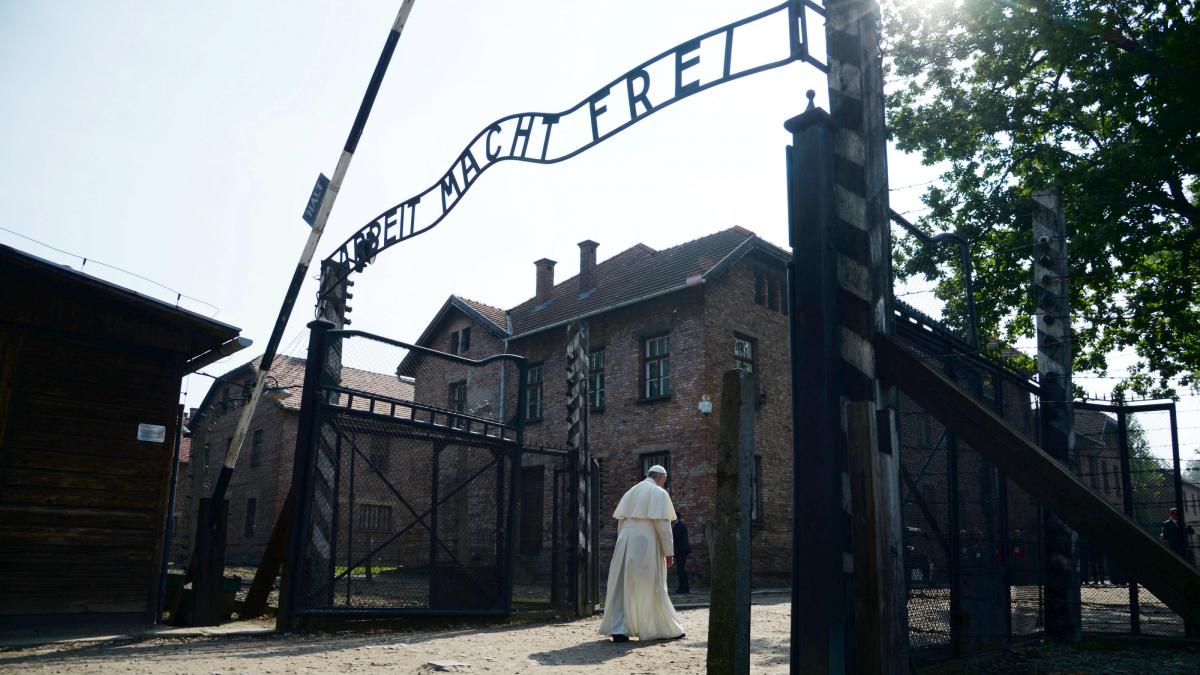 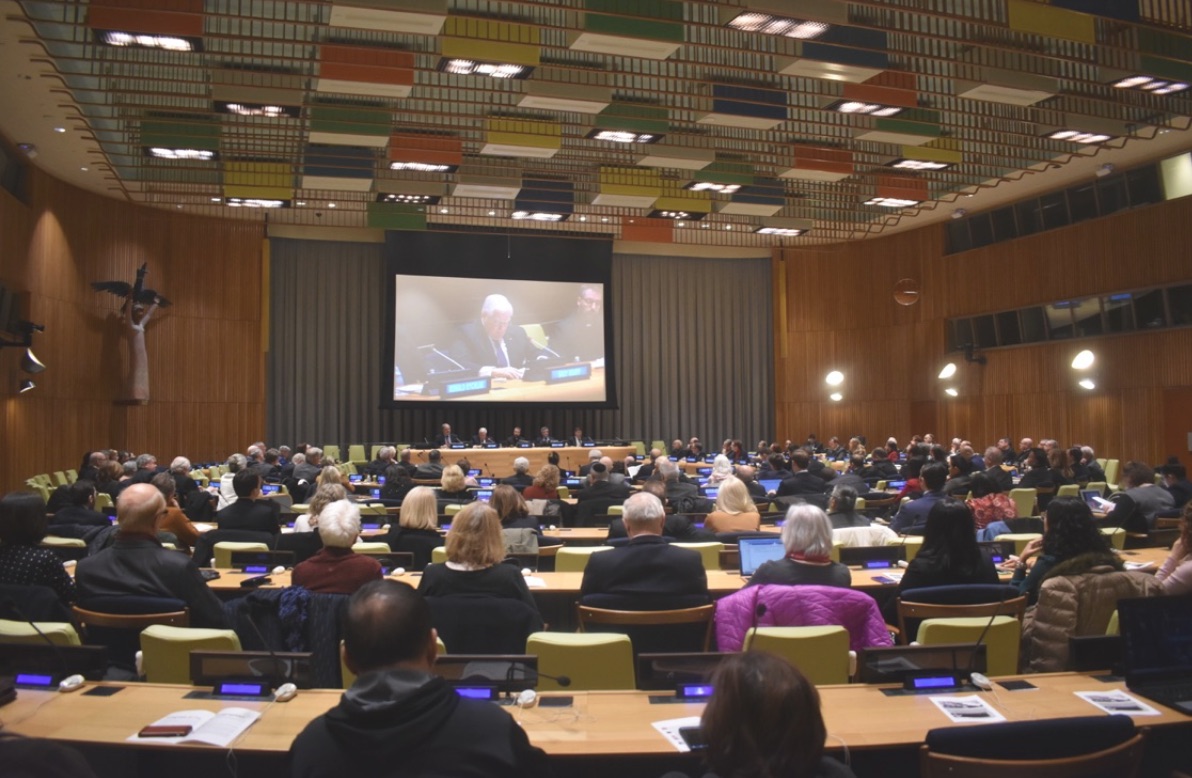 On January 27, the Permanent Observer Mission of the Holy See to the United Nations, together with the Pave the Way Foundation, sponsored a conference entitled “Remembering the Holocaust: The Documented Truth about the Holy See and the Catholic Church to Save Lives.” It was held in the Trusteeship Council Chamber at United Nations Headquarters to commemorate Holocaust Remembrance Day and the 75th anniversary of the liberation of the Auschwitz-Birkenau concentration camp.

In his opening remarks to a packed chamber of over 350 guests, including international scholars and distinguished members of the Jewish faith, Archbishop Gabriele Caccia condemned the evil that took place against millions of Jewish people murdered during the Holocaust. “Words do not exist strong enough to condemn this horrible tragedy,” he said. "Today we come together to pay homage to the millions of Jewish people were murdered during the Holocaust. After being stripped of everything, these men and women, boys and girls, were divested of their dignity and their life. We remember them, to ensure that such an atrocity will never disgrace mankind again."

The panel discussion was chaired by Monsignor Fredrik Hansen of Holy See Mission, who framed the event with words Pope Francis said on January 26 in St. Peter’s Square: “We mark the 75th anniversary of the liberation of the Auschwitz extermination camp. Before this atrocity, it is not possible to remain indifferent, and the duty to remember it is grave. We are all invited, to take time to pray and reflect with each one saying in his or her heart 'Never Again, Never Again.'"

Mr. Gary Krupp, Founder and President of Pave the Way Foundation, described how he, his wife Meredith and the Pave the Way Foundation got involved in documenting the work of Catholics in opposition to the Holocaust and how out of the Jewish virtue of gratitude he and his organization has tried to correct the historical record.

“The Vatican was concerned about the well-being of Jews, instead of the legend that the Vatican only cared for their own assets,” he said. He revealed that an investigation into the false narrative of the Church during the war years was created by a Soviet disinformation plan, called “Operation Seat 12.” Mr Krupp and his team felt the need to shine a bright light of truth on years of disinformation and to remember with gratitude those who liberated Auschwitz and the other camps. They focused in particular on the help provided by Pius XII and so many faithful Catholic bishops, priests, nuns and laypeople who risked so much to save Jews from the fate of the camps.

Professor Edouard Husson, a scholar and author on the Holocaust from the Cy Cergy Paris University, spoke about the ideas and actions behind “Nazi Totalitarianism: From Antisemitism to Genocide.” He described the ideology and events that to the Shoah, how extensive it was, how much of the world ignored it as it was happening, and how the liberation of Auschwitz and the other camps led the international community to say “never again” and commit itself to the prevention of genocide and take more seriously the thoughts and actions that lead to them.

Professor Ronald Rychlak, Professor of Law at the University of Mississippi and author of three major works on the Holocaust, the Catholic Church and Nazism, spoke about “Soviet Disinformation and the Campaign against Pius XII.” Rychlak, a legal advisor to the Permanent Observer Mission of the Holy See for two decades, described how the Soviet disinformation campaign that led to the calumny that Pope Pius XII, the Holy See and the Catholic Church were complicit with Nazism and the Holocaust. He mentioned his work with Mihai Pacepa, former head of Romanian intelligence under Soviet rule,  who defected to the West, who helped him to see the extent of that campaign via theater and popular literature changing the praise the Church was given until 1962 to vilification.

Mr. Mark Reibling, author and researcher, has written extensively on Pope Pius XIII's efforts against National Socialism and spoke on the topic of “Pius XII and the German Resistance,” highlighting the mediating role of Pius XII, demolishing the idea that Eugenio Pacelli was “Hitler’s Pope.” The comparison between the verbal silence of the Church and its plotting against the Nazi regime behind the scenes showed, he said, a Pope who preferred actions over words. Reibling documented the opposition of Pope Pius XII to the National Socialism advanced by Hitler and his efforts, together with many others, inside and outside the Church, to bring that destructive and dehumanizing regime to its end.

Doctor Michael Hesemann, Professor of History at Gustav-Siewerth Akademie in Germany and the author of “The Pope and the Holocaust” and scores of other works, spoke on what the Vatican archives reveal about Pope Pius XII and the Holocaust. He detailed Pius’  thoughts on the "dangerous heresy" of national Socialism as well as the wickedness of Hitler. He described the background of Eugenio Pacelli, later Pope Pius XII, whose childhood Jewish friends in Rome shaped his approach to Jewish culture, and how he spent his adult life trying to protect Jews from those who would do them harm. Dr Hesemann contextualized the significance of the Pope's silence.

Matteo Luigi Napolitano, Professor of the History of International Relations at the Universita del Molise in Italy, is the author of many essays on the diplomatic work of the Church during the Holocaust and in particular of Pius XII and John XXIII. He spoke on how diplomacy was used to try to save mankind in a speech entitled “Diplomacy for Mankind: Historical Notes about Pius XII and World War II”, which highlighted the role played by many people connected with ecclesiastic circles in counterfeiting documents. Napolitano shared with the audience the networks set up to rescue Jews in Europe, with a particular concentration on what happened in Hungary and in Rome and described how the plan to save as many Jews as possible was set into action in Europe, in Hungary and in Rome.

Professor Limore Yagil, a French Jewish Professor at the University of Sorbonne and special advisor to Yad Vashem Jerusalem, Israel and to the Holocaust Memorial Washington, DC, spoke about “The Role of the Catholic Church in France, the Saving of the Jews and the Ties with the Vatican.” She highlighted the relationship between Christians and Jews and the role of the Catholic Church in France leading up to and during World War II. She focused on the efforts of bishops in the Church in France to save Jews and the direct ties they had with the Vatican, showing in detail how Catholic leaders and networks in France tried to prevent the Holocaust and how their efforts led to saving at least 200,000 French Jews from extermination in the concentration camps.

Professor Johan Ickx, Director of the Historical Archives in the Holy See Secretary of State's Section for Relations with States contributed spoke on the topic of “The Roman Jews, Pius XII and The Archives of the Holy See.” A former Professor and Chair of Archival Sciences at the European University in Rome and the author of several works on World War II and the Vatican, the secrets of Holy See diplomacy, Pope Pius XII and the Resistance movements in Rome, he detailed what happened when the Nazis tried to deport the Jews of Rome and what was the impact of the interventions of Pope Pius XII and the Catholic Church.He also provided an introduction to the significance of the opening of all of the Vatican archives from 1939-1958 on March 2.

To watch the event in it's entirety click here: