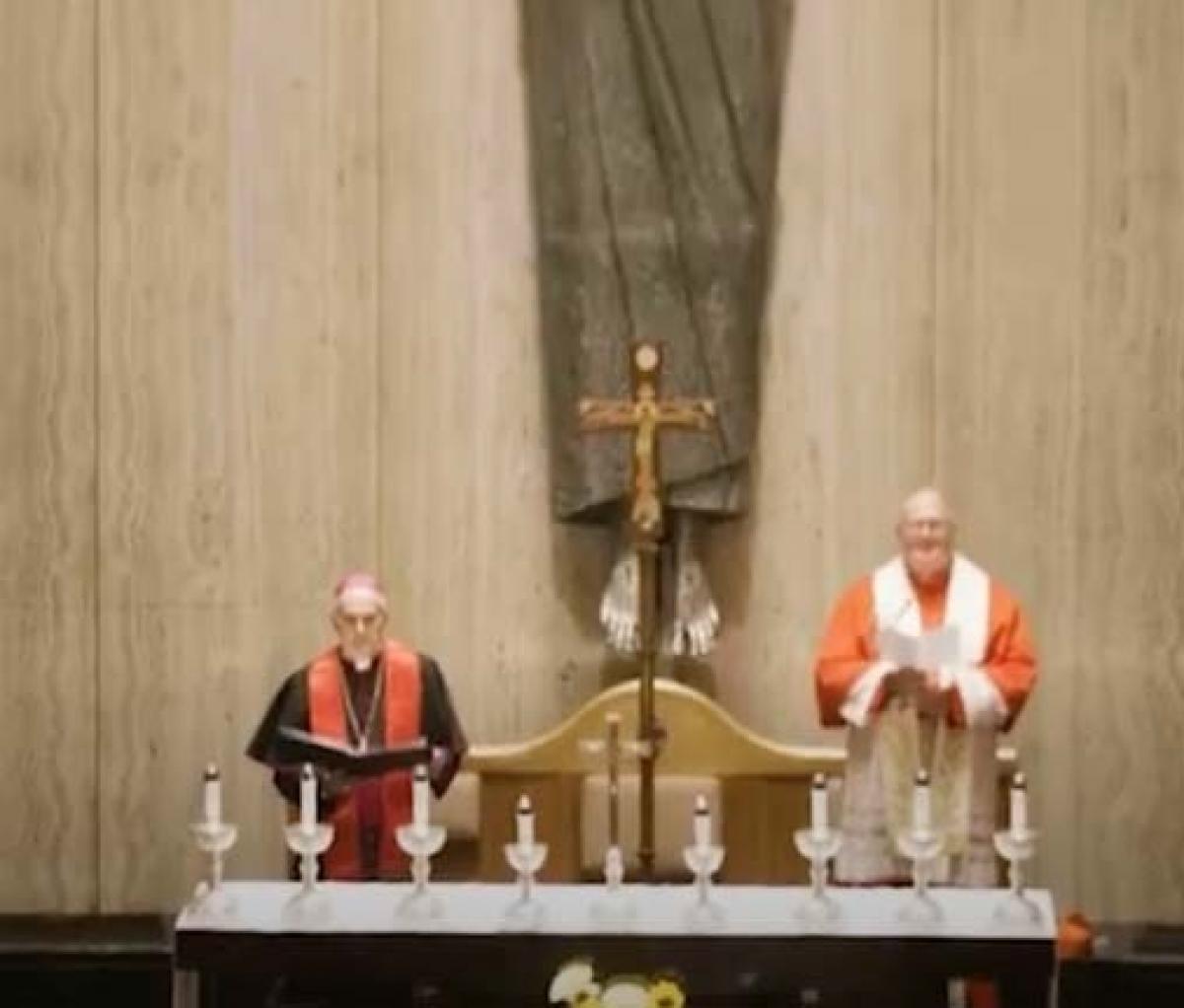 NEW YORK — Since 1987, on the vigil of the beginning of a new session of the General Assembly, the Permanent Observer Mission of the Holy See to the United Nations has been hosting a Prayer Service at the Church of the Holy Family, nearby the UN, to invoke God’s assistance upon all those involved in the work of the United Nations as they seek to respond to the needs of the world.

It is normally attended by 70 ambassadors, the Secretary-General, President of the General Assembly, senior UN staff, religious leaders, NGO delegates and others, packing the pews of the 320-seat Church and leaving dozens to pray standing.

This year, as the COVID-19 pandemic has led the United Nations to choose to carry out most of its work in a virtual format online, the Holy See Mission faced a choice as to whether to cancel the prayer service, create something online, or hold it in person, according to the well-determined and highly successful COVID-19 protocols followed by the Churches in the Archdiocese of New York.

The Mission chose to hold it in person and livestream it for those unable to be invited to attend in person this year.

As Archbishop Gabriele Caccia, Permanent Observer, wrote in a letter to Ambassadors, senior UN personnel, and other guests, “In this time of the COVID-19 pandemic, prayers are needed more than ever.”

The Prayer Service was held with a limited 50 people in attendance, with seated apart every other pew. The President of the 74th Session of the General Assembly came and spoke on the last day of his term. 25 Permanent Representatives were in attendance. The rest of the 50 available seats were filled by religious leaders, UN Staff, NGO delegates and members of the Holy See team that staff the event.

He framed his remarks on how this year’s Prayer Service was “especially significant” because it was occurring during the pandemic, because it gave every a chance to focus prayerfully on the lessons we can learn.

“Believers are convinced that the Lord of the universe can indeed bring good out of evil, light from darkness, life from death,” he said, before describing four lessons: that the pandemic has displayed how interconnected we are; it has heightened everyone’s solicitude for elders and the vulnerable; it has “unleashed heroic acts of sacrificial service” by medical professionals, public service police and rescue workers, teachers and clergy; it has “slowed us down, coaxing us to savor some quiet, to cherish again our families and friends, to cultivate faith in prayer, concern for others, and outreach to the wider community”; and it has shown us the vulnerability of health care networks and made us mindful of how many had no access at all.

“While we mourn and continue to battle the virus, we do rejoicing in these good promptings that have come from the evil,” he stated.

“The Covid-19 pandemic has upended lives, livelihoods, and has caused terrible sufferings,” he said. “It has exacerbated inequalities within and among countries, and it is reversing hard-won progress on poverty eradication, food security and other Sustainable Development Goals. It has also caused the closing of places of worship and upset what is deeply ingrained in our human nature: our shared impulse to gather and face hard times together. No region or country has been spared and the socioeconomic impacts will be felt for many years to come. The crisis also highlights both the interdependency and the fragility of our world. It shows that no one can do it alone.”

He emphasized that the crisis has exposed the “interdependency and the fragility” of the world and why international cooperation is essential.

“We will only succeed through unity, leadership and solidarity,” he said, and called upon all present to “pray to build on our collective strength and not only defeat the COVID-19 pandemic, but build a more equal, more just, peaceful and sustainable world.”

The President of the 74th Session of the General Assembly, Ambassador Tijjani Muhummad-Bande of Nigeria, spoke to those assembled on the last day of his term. He mentioned that since the time he addressed the Prayer Service a year ago, the world has undergone a great deal.

“We start by thanking God for sparing our lives so that once again we can be here for this occasion, very mindful as well, that many have perished, either due to the pandemic or other causes. We are still navigating its meaning. It will take some time for us to discern its meaning. Whatever the meaning,” he said, “it must include our need for compassion, our need for truthfulness.”

He added, “All I can do is join all of you in saying ‘Amen’ to all the prayers entrusted and unanswered and to beseech the Creator that we have the knowledge, the courage, the compassion, and the wisdom to do what is right for our fellow human beings … and to seek strength from the one God who creates and is not created.”

During the Service, prayers from Pope Francis were recited for an end to the pandemic, for peace in the world, and for care of our common home. There were also intercessions given for all who work at or for the United Nations, for lasting peace, for an end to terrorism, for a globalization of solidarity toward those who are suffering, for a spirit of hospitality toward refugees and migrants, for the dignity of each person to be respected and protected, and for the common good of all peoples.

Father Gerald Murray, Pastor of the Church of the Holy Family, gave the invocation. Archbishop Caccia presided over the Prayer Service and gave the final prayer.

Music was provided by the Schola Cantorum of St. Vincent Ferrer and St. Catherine of Siena Parishes in New York, led by James Wetzel. They sang selections from William Byrd, John Amner, Jacob Regnant, Andrea Rota and some original compositions by Wetzel himself.

Cardinal Dolan finished his remarks by quoting what Pope Paul VI said in his address to the General Assembly in 1965, which he said was particularly appropriate not only for the Prayer Service but for the United Nations as it marks its 75th Anniversary.

“The hour has come,” Paul VI said, “for a halt, a moment of contemplation, of reflection, almost of prayer; a moment to think anew of our common origin, our history, our common destiny. Today, as never before, in an era marked by such human progress, there is need for an appeal to the moral conscience of man. … The edifice of modern civilization must be built upon spiritual principles; the only principles capable not only of supporting it but also of enlightening and animating it. And these indispensable principles of superior wisdom must be founded … upon faith in God.”

For the first time in his history, the Prayer Service was livestreamed. The video can be found on the Mission’s YouTube Channel:

There was also press coverage. For a video from the Currents news program of NET.TV, click here.