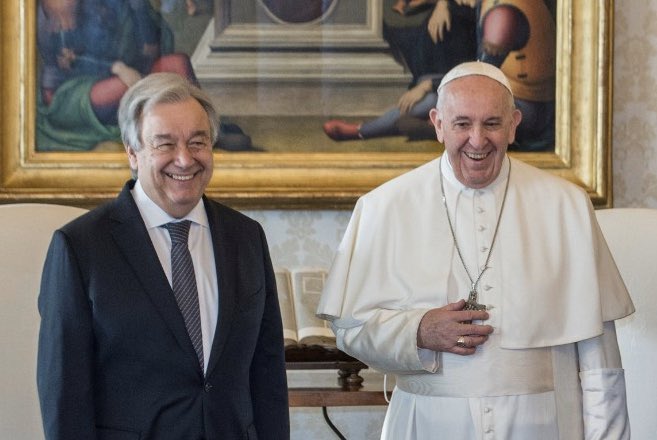 Pope Francis and Secretary-General Guterres Meet in the Vatican 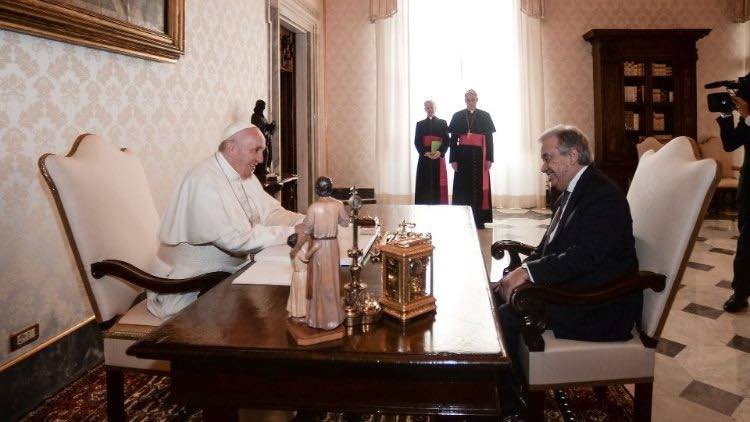 On Friday December 20, Pope Francis received UN Secretary-General Antonio Guterres in the Vatican. After a 40 minute meeting, the two recorded a joint video message to the world, stressing the urgent need for the world to address various problems facing the world.

“It is good that this meeting of ours takes place in the days leading up to Christmas,” the Pope said as Guterres stood beside him. “These are days when our eyes are turned to heaven to entrust to God the people and situations we hold most dear. In this gaze we recognize ourselves as children of one Father, brothers and sisters.”

Pope Francis called on the people of the world not to close their eyes in the face of the many wounds afflicting mankind but to unite and work to build a peaceful world. “We cannot and we must not look the other way in the face of injustice, inequality, the scandal of hunger in the world, of poverty, of children who die because they lack water, food and necessary healthcare,” he said.

He spoke of the plight of refugees, forced to leave their countries because of conflicts, violence, poverty or climate change, and who often face grim prospects and suspect welcomes. He urged the world not be indifferent to the wars that continue to be fought and that kill so many innocent people.

The world must unite, he added, to fight against every kind of abuse of children and to overcome indifference in the face of attacks against human dignity and human life, including the unborn.

Pope Francis also summoned the international community not to look the other way when believers of various faiths are persecuted. “The use of religion to incite hatred, violence, oppression, extremism and blind fanaticism, as well as to force people into exile and marginalization, cries out for vengeance before God,” he stated.

He condemned the arms race and nuclear rearmament, calling the possession and use of nuclear arms “immoral” and a “grim threat to humanity.” Dialogue, diplomacy, multilateralism and international organizations are mechanisms through which the world must build peace and strengthen understanding between people and between nations.

Pope Francis also spoke of care for our common home. The world must, he said “take care of our land which, generation after generation, has been entrusted to our custody by God so that we may cultivate it and hand it over to our children.” He stressed the urgent need for commitment to foster an integral ecology and reduce carbon emissions, underlining, “Let us do something before it is too late!”

As he concluded the joint video message, he reminded the world that “Christmas reminds us that what really counts in life is love."

In his remarks, UN Secretary-General Guterres, highlighted the “clear moral voice” of the Pope on issues that are at the very heart of the United Nations mandate. “You are a messenger for hope and humanity – for reducing human suffering and promoting human dignity,” he said.

He thanked Holy See for its “exceptional global engagement and strong support for the work of the United Nations” and mentioned in particular the pontiff’s visit to UN headquarters in 2015, the year the 2030 Sustainable Development Goals were adopted.

The teachings of the Catholic Church coincide, Guterres said, with core values of the United Nations Charter,namely, to reaffirm the dignity and worth of the human person, to uphold our common humanity and protect our common home.

He remarked on the timeliness of the meeting right before the celebration of Christmas. “This is a time of peace and goodwill and I am sad to witness Christian communities — including some of the world’s oldest — unable to celebrate Christmas in safety,” he emphasized.

Echoing Pope Francis’ concern, Guterres expressed dismay about the tragic attacks on believers of all faiths, such as Jews murdered in their synagogues, Muslims gunned down in their mosques and Christians killed at prayer. “We need to do more to promote mutual understanding and tackle rising hatred,” he urged.

He expressed deep appreciation for Pope Francis’s efforts to promote interfaith dialogue, mentioning the landmark declaration signed with the Grand Imam of Al-Azhar Ahmed Al-Tayyeb, entitled, “Human Fraternity for World Peace and Living Together.” This declaration, he stated, is particularly important “in a world that sees dramatic attacks on religious freedom and the lives of believers.” The United Nations has launched a Plan of Action to Safeguard Religious Sites and a strategy to combat hate speech. “We must stand together for peace and harmony,” he said.

Guterres concluded the video message saying that the peaceful spirit of the Christmas season was reflected in the Pope’s “vision, guidance and example,” and he wished the Pope and all Christian a joyous Christmas and blessed new year.

To view the video message in its entirety click here: 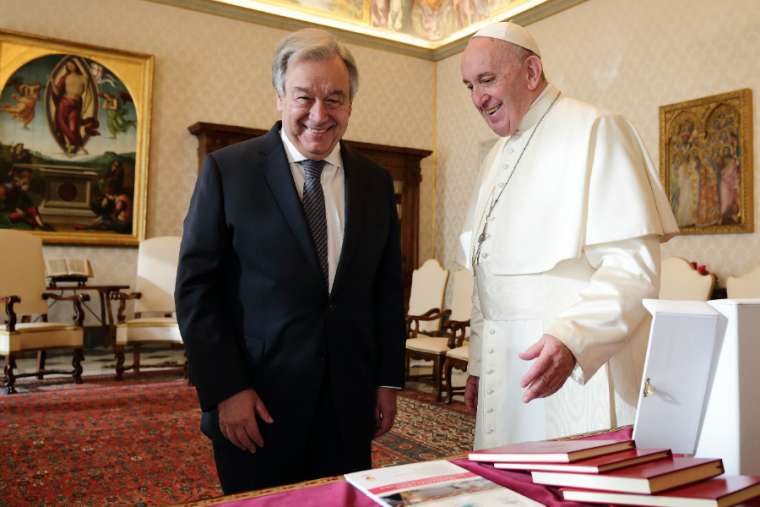