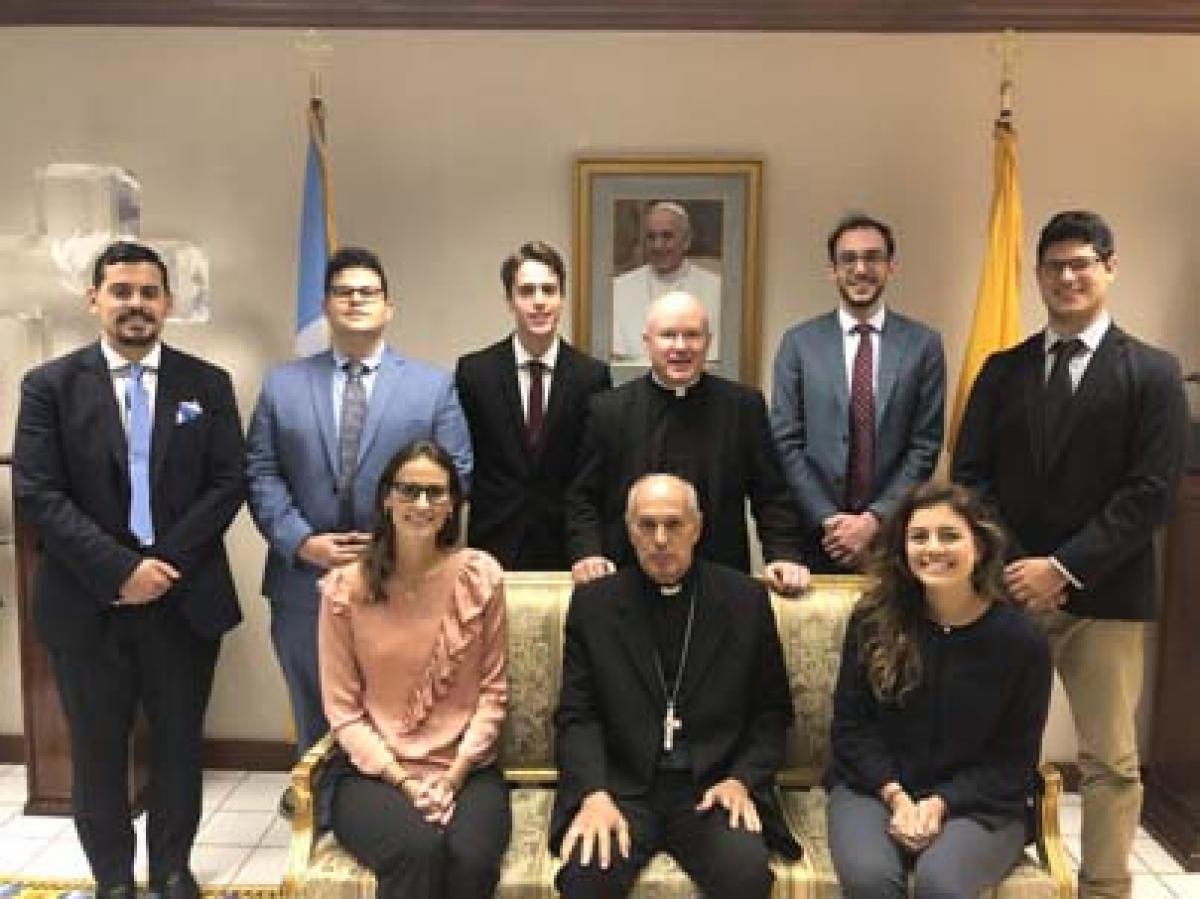 On August 31, the Holy See Mission welcomed seven interns for the September through December 2020 Session of the United Nations.

They hail originally from Argentina, Canada, Cuba, Italy and the United States.

They are a sign that things are slowly returning to the normal workload at the United Nations and at the Mission after the reduction in meetings and the shifting of them online.

David Lewandowski comes from Minnesota, where he graduated from the University of St. Thomas with degrees in Philosophy, History and Catholic Studies, with a concentration in Catholic social teaching, 20th Century Eastern European History and international human rights law. He has served internships at the Charlesmagne Institute and the Habiger Institute and recently completed a year of teaching in three high schools in Hungary. He is enthusiastic about the internship because “international relations, diplomacy and history have always been my passions and this position ideally intersects the talents God has given me, my background and what I beliee is my mission.”

Jean Maloney is from Maryland, and has degrees in Israeli Studies and English. She served for two years as a FOCUS missionary at the University of Pittsburgh after graduating from the University of Maryland. She has also done service work in Colombia and Ecuador among the homeless, addicted and indigent. She also served a five-month internship at the National Consortium for the Study of Terrorism and Responses to Terrorism. She is excited about the internship because it will give her “firsthand experience of the Catholic Church’s role in advocating for truth and justice in international affairs.”

Marisa Martinez is a native of Alabama where she graduated from Auburn University with a degree in business administration. Her passion for Catholic social teaching in action did not crystallize for her until she served for three years as a program coordinator for Catholic Charities Immigration Services in Denver. Previously she served for two years for the Spanish Ministry of Education teaching English at an elementary school in the province of Galicia, Spain. She found out about the internship because a friend of hers, Rebecca Rethwisch, served an internship in 2018 and was eager to apply because she believes the Holy See Mission helps “bring the values of peace, justice and human dignity to the forefront” and that it would be an “invaluable opportunity to learn and to translate my experiences on the ground in a more impactful way.”

Thomas Murphy, from Calgary, majored in political science at the University of Calgary, where he concentrated on world politics and international relations. He grew up in a non-practicing household and in his teens discovered an appreciation for a life of faith, such that he is passionate about living out a vocation as a Catholic layman, using whatever gifts God has given him in support of the Church’s Mission. He was drawn toward applying for an internship at the Holy See Mission because he views Catholic social teaching “as an answer for current and pressing issues that plague us today.”

Juan Padin, a native of Buenos Aires, is an Argentine lawyer, having graduated from the National University of Buenos Aires. He is presently a candidate for a Masters in International Humanitarian Law and Human Rights (LLM) at the University of Geneva, Switzerland. For three years he worked as a legal advisor at the Office of Foreign Affairs in the Argentine Ministry of Justice and Human Rights. He has also done full-term internships as at the UN International Law Commission and at the United Nations Food and Agriculture Organization’s office in Argentina. He was excited to serve at the Holy See Mission because, he said, it “will allow me to link my passion for international law with the practical experience of the work of the Holy See in the international arena and the implementation of the social doctrine of the Catholic Church worldwide.”

Pedro Perez was born in Cuba. At nine, he moved with his family to the United States in pursuit of democracy. His experiences as a Cuban immigrant inspired him to pursue degrees in History, Political Science, Latin American Studies and Art History at the University of Florida, during which he studied abroad in Paris at Sciences Po. After graduating from university, he served in the Peace Corps in Ukraine. He will begin law school in the Fall of 2021. He speaks Spanish, French, Russian and Ukranian and said he was eager to serve as an intern in order to “aid the Holy See in its crucial mission.”

Francesco Teruggi began his internship at the Mission in January, as the third annual fellow from the Toniolo Institute from the Catholic University of the Sacred Heart in Milan. He has been covering the issues at the Security Council over the past eight months and looks forward to continuing that service to the Mission through Christmas. He has a Bachelor’s Degree in Clinical Psychology, a Master’s in Organizational Psychology and a Master’s degree in Middle Eastern Studies, where he focused on the conflict in Yemen. After graduation he worked for Oasis International Foundation, a Milan-based research center founded by Cardinal Angelo Scola and focused on the Middle East. He came to the Mission hoping that to put what he called his “varied and cross-disciplinary education in social psychology, organizational psychology and political science” to service for the Mission.

Father Roger Landry, who supervises the internship program, said that the Mission was very happy to welcome back a full crew of interns after a summer when, because of the pandemic, no new interns were able to be received.

“The work of the United Nations is rather vast and our staff is small. Even if we were all given the gift of bilocation, we could never cover everything important happening at the UN on a given day on our own. That’s why the interns we have are so important to our work.”

The interns receive four days of intense training at the beginning of their term, which covers Holy See Diplomacy, the work of the Holy See Mission at the UN, the workings at the UN, various writing exercises to help them learn the literary form necessary for diplomatic reports, briefings from the staff members on their areas of expertise and more. They also have a chance to develop a sense of teamwork, receive a tour of the United Nations, and get introduced to New York City.

During the months of March through May, Holy See staff and interns worked remotely, covering the virtual meetings from home. During the summer, two interns from the Spring Session, Francesco Teruggi and Elia Berlingerio, remained in New York to help the staff of the Mission attend and report on the meetings taking place on line. The interns who had been accepted for the Summer program had their terms deferred to subsequent sessions, including this Fall.

Those interested in finding out more about internships of the Holy See, or applying for future sessions, are encouraged to visit the internship page on the Holy See Mission’s website. 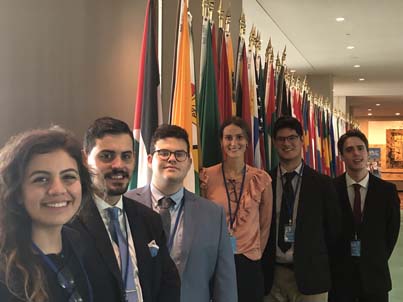 (The six interns have a photo during their training before the Holy See's flag within the United Nations. From left to right: Marisa Martinez, Juan Francisco Padin, Pedro Perez, Jean Maloney, David Lewandowski, Thomas Murphy. Francesco Terruggi is pictured in the photo at the top, standing, second from the right).