On March 18, Archbishop Bernardito Auza, Permanent Observer of the Holy See to the UN, gave an intervention during the deliberations of the 60th Session of the Commission on the Status of Women of the United Nations dedicated to “Women’s Empowerment and the Link to Sustainable Development.”

In his statement, Archbishop Auza cited the commitment of Member States in the 2030 Agenda for Sustainable Development that “no one will be left behind” to ensure that women in vulnerable situations, “whose potential is often the least appreciated and realized,” are not forgotten. He mentioned the situation of women and girls who face violence in situations of war, who are trafficked for sexual exploitation or forced to convert, marry, or abort their children. He also called on the international community not to leave elderly women, mothers, or girls at the very start of life behind and to ensure women have adequate access to education and adequate health care.

On March 21, Archbishop Bernardito Auza, Permanent Observer of the Holy See to the UN, gave an intervention during the United Nations Security Council Open Debate on “The Prevention and Resolution of Conflicts in the Great Lakes Region” of Africa.

In his statement, Archbishop Auza reflected on Pope Francis’ commentary on the motto of the Central African Republic during his visit to the Great Lakes Region last November and how the values of unity, dignity and work not only express the aspirations of each inhabitant of the Great Lakes Region but chart the way forward to establish an enduring prosperity and peace.

Archbishop Auza urged the international community to support the countries of the Region in stopping the abundant natural resources of the region from being exploited by a few to the detriment of the common good, in fighting corruption, in fostering free, credible, inclusive and transparent elections, in promoting disarmament and in fighting the arms trade. He also said greater investment must be made in preventive diplomacy and in educating and providing job opportunities for the young, lest they be vulnerable to recruitment from armed and terrorist organizations.

Women and Girls: Victims of Sexual Violence in Conflict 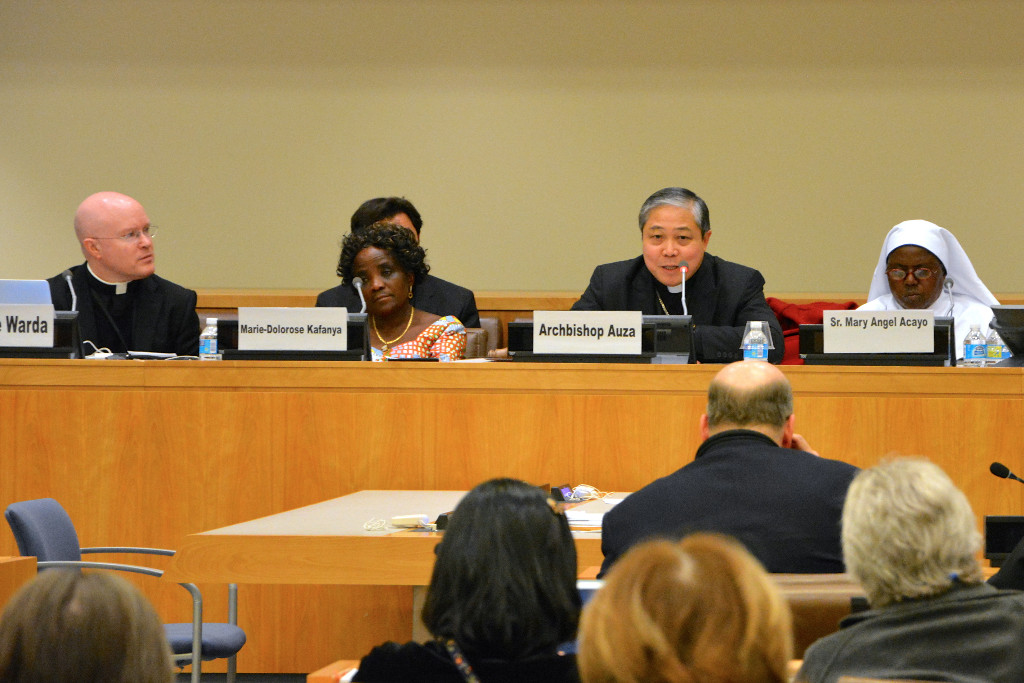 On March 22, those who care for victims of rape and sexual violence in the Democratic Republic of the Congo, Uganda and Iraq shared the horrors of sexual violence women endure in regions of conflict and urged the international community for assistance at a side event  hosted by the Permanent Observer Mission of the Holy See to the United Nations in New York during the Commission on the Status of Women. 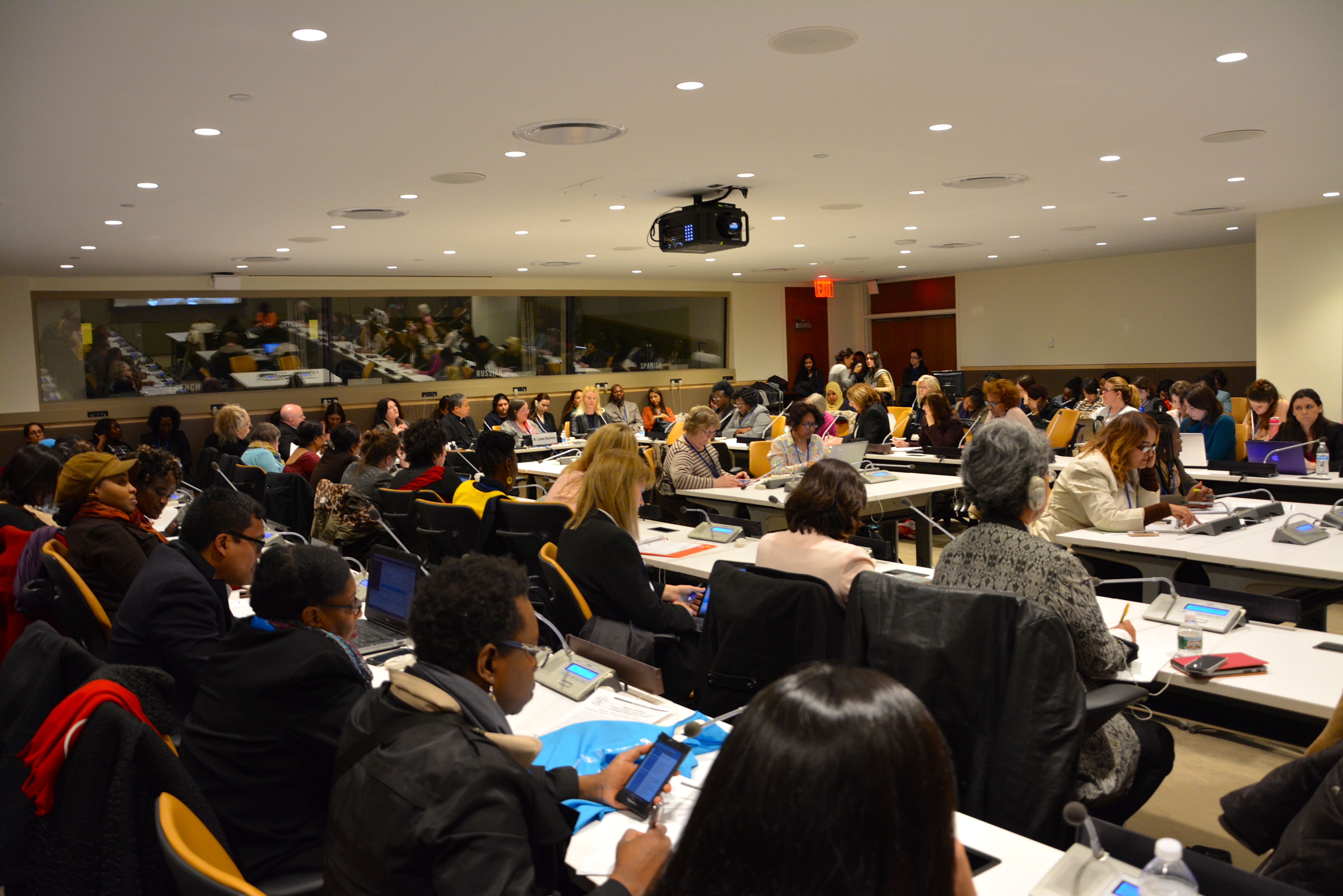 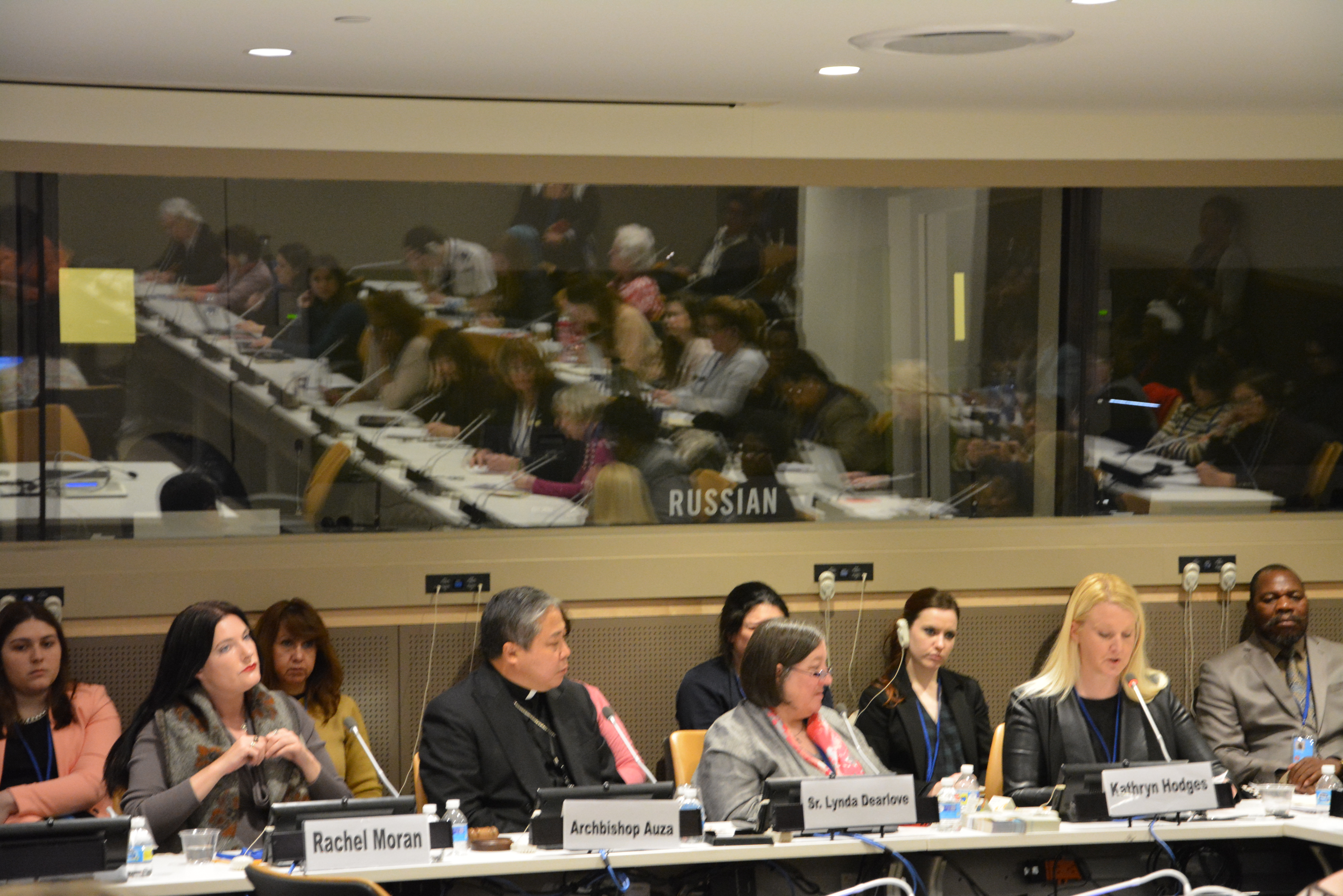 On March 21, the Permanent Mission of the Holy See to the United Nations in New York hosted a panel discussion entitled The Pastoral Care of Women and Girls Working or Living on the Streets in which panelists advocated for policies that criminalize the demand of prostitution and human trafficking while assisting the victims. 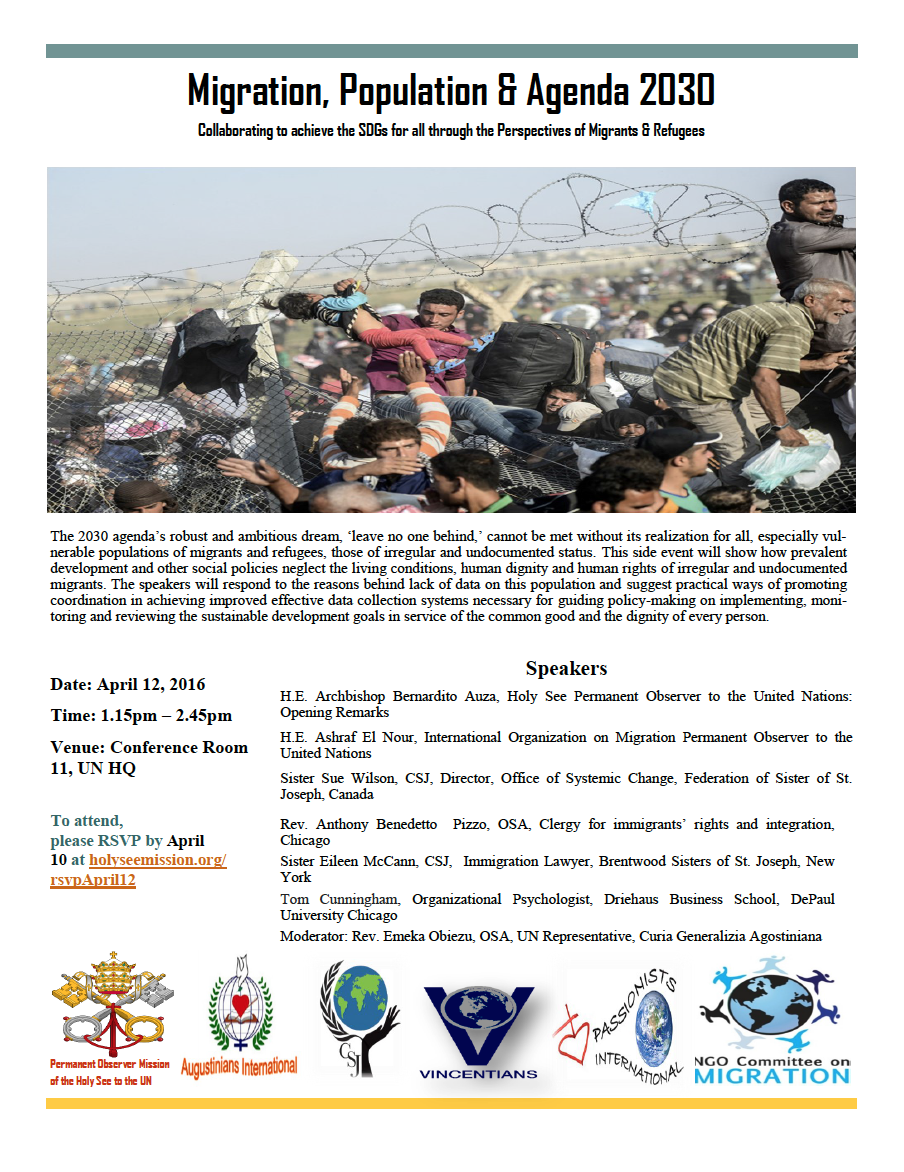 Migratation, Population and Agenda 2030: Collaboriting to achieve the SDGs for all through the perspectives of migrants and refugees
Conference Room 11
holyseemission.org/rsvpApril12

Sheen Center for Thought and Culture, 18 Bleecker St., New York, NY, 10012.
RSVP: Tickets are free and this event are open to the public. Please register by calling 212-515-0153 or by emailing events@americamedia.org
For more information visit the website.

Following America's special issue on international religious freedom, a group of experts will discuss the current hopes and challenges facing the world today in the exercise of religious freedom. Presenters include Archbishop Bernardito Auza, Permanent Observer of the Holy See to the United Nations; Dr. Maryann Cusimano Love, Associate Professor of International Relations, The Catholic University of America, Washington, D.C.; and Drew Christiansen, S.J., Distinguished Professor of of Ethics and Development at Georgetown University, Washington, D.C. The discussion will be moderated by Matt Malone, S.J., president and editor in chief of America Media, and is made possible through a partnership with the Catholic Communications Campaign.