Our website is being upgraded and may show errors while we work. Please check back in a few hours.
Week of May 20, 2016

Cardinal Parolin on the Diplomatic Work of the Holy See 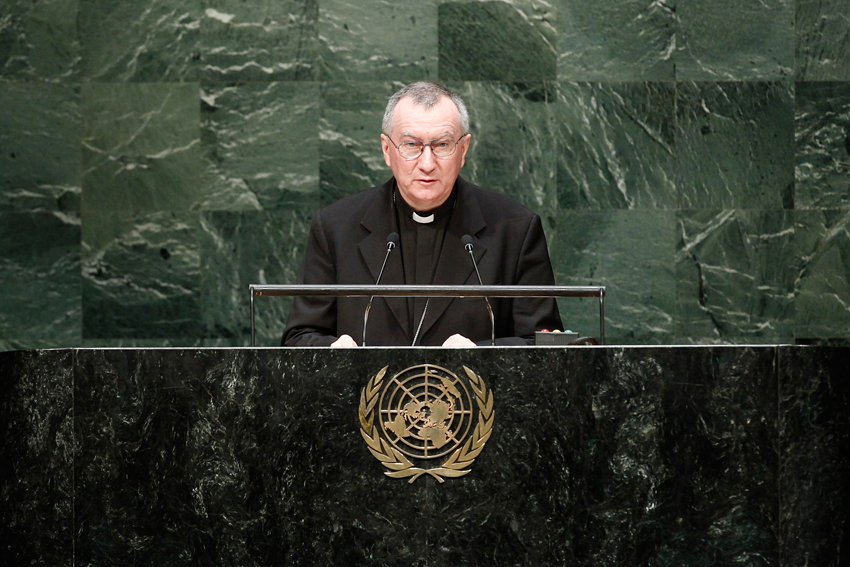 On May 11, at the University of Tartu in Estonia, His Eminence Pietro Cardinal Parolin, Secretary of State of the Holy See, gave an address on the Holy See and international relations. Insofar as his words answer many questions that people often ask about the diplomatic work of the Holy See’s Permanent Observer Mission to the UN, we thought it would be fitting to share excerpts of his address in this newsletter.

I have been invited to address you on the theme of the Holy See and international relations. In order to clarify matters, I propose to begin in a traditional way with adefinitio terminorum. The term “Holy See” has a precise meaning in the Church’s canon law. In the strict sense, the Holy See or “Apostolic See” refers to the See of Peter and thus to the Pope, who is the Successor of Peter in that See. However, the term is more often used in a broader sense to refer not only to the Pope but also to the Secretariat of State and the other departments of the Roman Curia, which assist the Pope in the government of the Catholic Church (cf. Code of Canon Law, can. 361). The Holy See is considered a sovereign entity in international law. That said, its sovereignty is related not to a territory but to a person, namely the person of the Roman Pontiff, the Pope.

As a subject of international law, the Holy See engages in diplomatic activity. We often use the expression “Vatican diplomacy” or “Papal diplomacy” as useful short-hand expressions. It should, however, be noted that Vatican City State, which is a small independent territory around the Vatican hill in Rome, does not itself send and receive ambassadors and does not directly engage in diplomatic activity. Such activity is conducted by the Holy See, not Vatican City State, even though the latter is sovereign in its own right. Even when the Holy See was completely deprived of its own territory in the years between 1870 and 1929, it continued to send and receive ambassadors, sign international treaties and engage in international mediation, all of which are activities pertaining to sovereign entities. Thus, Vatican City State was set up by the Lateran treaty of 1929 not to establish the sovereignty of the Holy See but simply in order better to manifest and guarantee it.

Of course, it is true to say that the Holy See’s international activity, whether diplomatic or non-diplomatic, is ultimately the activity of the Pope himself. The Pope is the principal diplomatic actor of the Holy See. This is evident, for example, in the personal action of Pope John Paul II, particularly in Central and Eastern Europe, and in the various initiatives of Pope Francis, which have heightened awareness about issues of concern to all humanity, such as care for the environment, the plight of refugees and migrants, and the overcoming of civil strife and warfare.

The Pope is assisted in his diplomatic activity by various structures of the Holy See, in particular, the Secretariat of State, Apostolic Nunciatures and Delegations in various countries and Permanent or Observer Missions to various international organizations. Naturally, he also relies on the cooperation and assistance of local episcopates, the Catholic faithful and people of good will of different faiths and none.

The Apostolic Nuncio has a dual role. On the one hand, he is the Pope’s representative to the local Church in a given country or in a number of countries simultaneously. As such, he has the duty of strengthening the bonds of unity and communion between the See of Peter and the local Catholic Church (cf. Code of Canon Law, can. 364). On the other hand, he represents the Pope to States and public authorities in accord with the norms of international law. In accordance with the Vienna Convention of 1961, the Apostolic Nuncio is considered to be the equivalent of an Ambassador. In various countries, he is also automatically the Dean of the Diplomatic Corps. He has the task of promoting and fostering relations between the Holy See and the authorities of the State or States to which he is accredited. In collaboration with the local Church, he also deals with questions concerning the relations between the Church and the State, including the drafting and implementation of concordats and other agreements of this type. . …

States which have established diplomatic relations with the Holy See are represented by an Ambassador, who may be resident in Rome, or in another country, where he may also be accredited as an Ambassador. …

There are a number of States with which the Holy See does not yet have diplomatic relations; in these cases, the Holy See is represented, where possible, by an Apostolic Delegate, who, while having an essentially ecclesial mission, also maintains contacts with the civil authorities, although he is not an Ambassador in the strict sense.

While conducted in accordance with international law and practice, the Holy See’s diplomacy is atypical and sui generis. Bilateral relations between the Holy See and a given State differ from those between two States in a number of important respects. Unlike States, the Holy See does not pursue any political, commercial or military aims, and it is neutral in disputes between States. Unlike two States or countries, one of which is always foreign with respect to the other, the Catholic Church is never really foreign anywhere. Practically everywhere there are citizens of a given country who are also members of the Church. This is why the department of the Holy See which deals with relations with States is not referred to as a Ministry of Foreign or External Affairs. Furthermore, since both Church and State, in their respective spheres, work for the common good of the same people and the same community, they are not opposed to each other, at least in principle. This very fact naturally implies that in order to foster mutual understanding and cooperation there should be dialogue between the two sides, not only at local or national level, but also at the diplomatic level of institutional contacts between the Holy See, which includes the central organs of government of the Church, and individual States.

The Holy See has always taken to heart the great questions affecting humanity as a whole. For this reason, from the outset, it has been involved in the various international and regional multilateral organizations which came into being in the wake of the devastating impact of the Second World War. This involvement takes on various forms. In some cases, such as the Organization for Security and Cooperation in Europe (OSCE) and the International Atomic Energy Agency, the Holy See is a full member and has a Permanent Representative, while in others, such as the United Nations Organization and the Council of Europe, it has observer status and is represented by a Permanent Observer. It also takes part regularly in the summits, conferences and other meetings of these organizations.

Every year, the Secretariat of State issues a publication entitled Le Saint-Siège et les Organisations internationales, which contains a list of all the international meetings and conferences in which the Holy See has taken part during the previous year. A perusal of this publication shows that the Holy See interests itself in a wide variety of questions, such as the promotion of peace, respect for humanitarian law in the case of conflict, disarmament, the peaceful use of nuclear energy, human rights, including the right to life and religious freedom, the care of migrants and refugees, integral human development, environmental protection, the protection of the cultural and artistic heritage of humanity, the provision of sufficient food resources, adequate health-care, education, and so on.

Regarding these questions, the Holy See does not offer a purely political, commercial or technical contribution. Instead, it approaches them from a moral and spiritual point of view, offering perspectives and insights which would otherwise not always be heard or taken into account, in the hope of overcoming inadequate or partial positions so as to promote the genuine good of all. In its contributions, the Holy See is guided, among other things, by the social teaching of the Church, which is based on four fundamental principles: the dignity of the human person, the common good, solidarity and subsidiarity. In his programmatic Apostolic Exhortation Evangelii Gaudium, Pope Francis synthesizes this approach: “In her dialogue with the State and with society, the Church does not have solutions for every particular issue. Together with the various sectors of society, she supports those programmes which best respond to the dignity of each person and the common good. In doing this, she proposes in a clear way the fundamental values of human life and convictions which can then find expression in political activity” (No. 241). …

The Holy See’s diplomatic activity has at its centre the human person, whose inalienable and transcendent dignity is ultimately based on the fact that, being created in the image and likeness of God (cf. Genesis 1:26-27), he or she is open to the transcendent. With this awareness, the Holy See is deeply interested in the good of humankind as a whole. To quote the memorable words used by Pope Paul VI to describe the mission of the Roman Pontiff at the United Nations General Assembly on 4 October 1965, the Holy See and the whole Catholic Church, inspired by the message of the Gospel, aim to serve humanity “with disinterestedness, humility and love”.

I thank you for your attention.