Our website is being upgraded and may show errors while we work. Please check back in a few hours.
Week of May 27, 2016

You are Cordially Invited

Conference on the Importance of Motherhood and Fatherhood

On Wednesday, June 1, from 3-5 pm at the United Nations, the Permanent Observer Mission of the Holy See will be hosting a special conference on the importance of fatherhood and motherhood for the integral development of men, women, children and society. Co-sponsored by the Universal Peace Federation, it is being held on the day that the United Nations has designed as Global Day of Parents.

The Conference will feature several experts on motherhood, fatherhood, the raising of children and the family, including Brad Wilcox, Meg Meeker, Brian Caulfield, Deborah McNamara and Cheryl Wetzstein. The event, to be held in UN Conference Building Room 1, will be chaired by Archbishop Bernardito Auza, Permanent Observer of the Holy See to the UN, and will also feature remarks by Dr. Thomas Walsh, President of the Universal Peace Federation.

Those interested in attending the free conference must have a UN pass, which can be obtained by registering for the event by May 30 at holyseemission.org/rsvpJune1 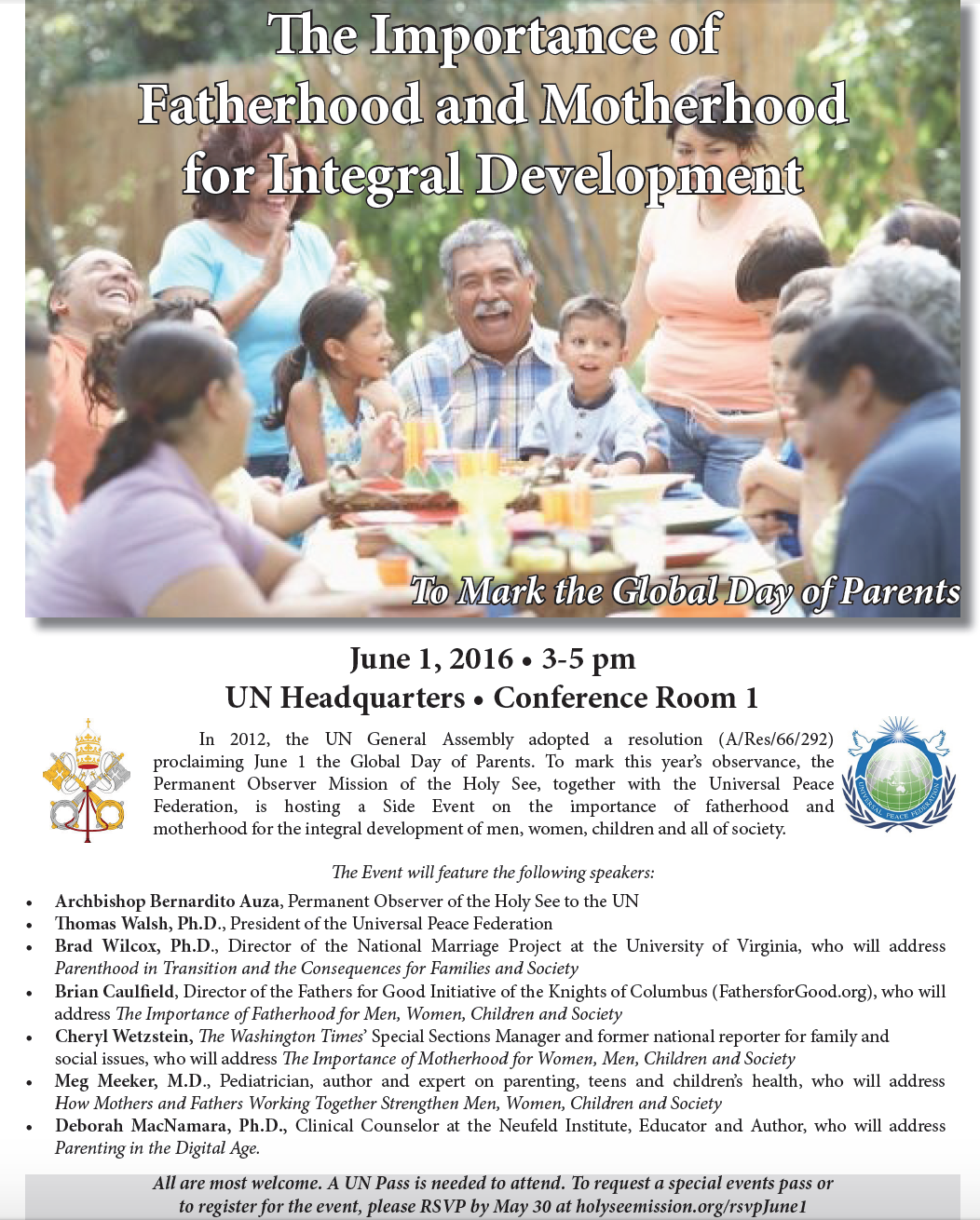 Statements at the World Humanitarian Summit
Istanbul, Turkey
May 23-24, 2016

Holy See Secretary of State Cardinal Pietro Parolin joined world leaders gathered in Instanbul for the World Humanitarian Summit on May 23-24. Cardinal Parolin delivered five statements, including a message from Pope Francis to UN Secretary-General Ban Ki-Moon,  in which he stressed the need for upholding the dignity of the human persons at all stages of life and in vulnerable situations.

His statements can be found below:

Message of Pope Francis to His Excellency Ban-Ki Moon, Secretary General of the United Nations

On May 23, 2016, Cardinal Pietro Parolin, Secretary of State to His Holiness, read a Message from Pope Francis to the Secretary General of the United Nations, His Excellency Ban Ki-moon.

In his statement, Pope Francis expressed his hope that the World Humanitarian Summit would to be a turning point in alleviating the sufferings of millions who are vulnerable due to poverty, persecution, conflicts, natural disasters, commercial or ideological strategies. He called for renewed commitment to protect each person, his dignity, human rights, security, comprehensive needs, and social and cultural identity. He stressed that “leaving no one behind” means that we take responsibility for decisions and actions so that every family has a home, every refugee a welcome, every person recognition for his dignity, every wounded person care, every child a childhood, every young person a future and every elderly person the dignity of old age. He challenged the Summit to hear the cry of the victims and the suffering, to learn from them and to change our ways of life, politics, economics, behaviors and attitudes to build a more humane world.

The Pope’s Message can be found here.

On May 23, 2016, Cardinal Pietro Parolin, Secretary of State to His Holiness, Pope Francis, gave the following statement of the Holy See at the Leaders’ Segment of the World Humanitarian Summit.

In his statement, Cardinal Parolin said that the human person should be the aim of any and every humanitarian action. In response to a “culture of waste and disregard for human life,” there is a need for a “culture of dialogue and cooperation.” He mentioned the abuses against human dignity that take place in genocide, deliberate attacks against civilians, violence and rape against women and children, destruction of cultural patrimony, selfish economic policies and heavy reliance on military intervention. There is a need for education and formation toward respect for the human person, especially the weakest and most fragile, and he said the Holy See is doing its part to build a genuine fraternity among peoples and nations.

On May 23, 2016, Cardinal Pietro Parolin, Secretary of State to His Holiness, Pope Francis, gave the following statement of the Holy See at the High-Level Leaders’ Roundtable entitled “Political Leadership to Prevent and End Conflicts” dedicated to Core Responsibility 1 of the Agenda for Humanity.

In his statement, Cardinal Parolin noted that, with regard to violent conflicts throughout the world, “an ounce of prevention is worth a pound of cure” and that the international community must unite to prevent and end violence and armed conflicts in accordance with the common ethical principles that constitute the foundation for all humanitarian interaction. That involves relying primarily not on military solutions but on an integral human development that addresses the root causes of conflict. He stressed the commitment to the Holy See to promote disarmament, conflict prevention and long-term peace-building efforts; to foster a culture of peace, active solidarity and respect for human dignity through interreligious dialogue; to educate for peaceful and inclusive societies; to work toward nuclear disarmament and non-proliferation.

On May 23, 2016, Cardinal Pietro Parolin, Secretary of State to His Holiness, Pope Francis, gave the following statement of the Holy See at the Roundtable entitled “Leave No One Behind: A Commitment to Address Forced Displacement” dedicated to Core Responsibility 3 of the Agenda for Humanity.

In his statement, Cardinal Parolin said that the true measure of every society is gauged by how it responds to the life and dignity of every person, no matter how small or legally defined. The Holy See seeks to be a sign and instrument promoting the human dignity of migrants, asylum seekers, refugees and displaced persons, and all those suffering from exclusion, hunger, exploitation and the unjust distribution of the planet’s resources. He noted the Holy See’s shared commitment with regard to understanding better the current situation and causes of forced displacements and refugee flows, advocating for their protection, forming public opinion to recognize the displaced fraternally, and demonstrating solidarity, cooperation and international interdependence.

On May 24, 2016, Cardinal Pietro Parolin, Secretary of State to His Holiness, Pope Francis, gave the statement of the Holy See at the Roundtable entitled “Uphold the norms that safeguard humanity” during the World Humanitarian Summit (WHS).

In his statement, Cardinal Parolin said that the WHS provides the opportunity to reaffirm, reinforce, respect and implement the principles of the UN Charter and the fundamental agreements of the humanitarian system. He stressed that humanitarian assistance should never be used for political, economic or ideological blackmail and called for effective juridical means to apply international law to protect Christians and other religious minorities from acts of genocide, crimes against humanity, and war crimes, the use of rape and violence against women as a tactic of war or terror. He stated forthrightly that there is no right to abortion under international human rights law or international humanitarian law and encouraged religious institutions and Catholic organizations to accompany victims of rape in crisis situations and to care for them and their children, conceived and born of rape.

He pronounced the commitment of the Holy See to promote in humanitarian situations the centrality of the human person, the provision of material and spiritual assistance, support for the family and access to education; to enhance respect and protection of civilians, hospitals, schools, houses of worship, and cultural patrimony; and to prevent humanitarian assistance from being manipulated as a instrument of pressure.