Our website is being upgraded and may show errors while we work. Please check back in a few hours.
Week of June 10, 2016 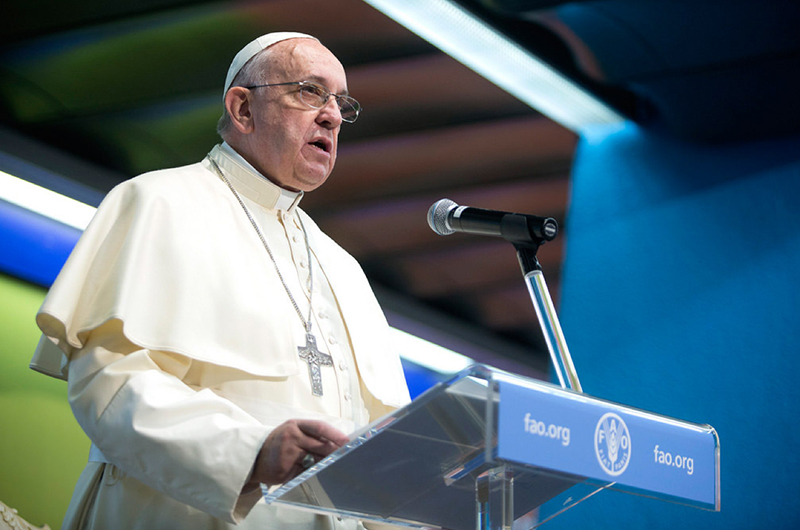 On June 13, Pope Francis addressed the international community at the Food and Agriculture Organization of the United Nations (FAO). In his remarks, he emphasized that ending world hunger is a big priority for the Catholic Church and urged leaders to view poverty and hunger not as a statistic or concept but as a reality affecting human beings with faces and stories.

The Holy Father noted the paradox that many people suffer from hunger while others excessively consume and even waste food. He challenged bureaucratic structures that allow weapons to enter conflict zones more easily than food and other humanitarian aid for civilians. He also honored those who have died in their efforts to combat hunger and encouraged those who work in the field to continue fighting for "zero hunger." 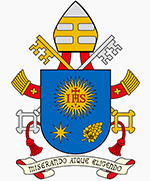 Address of His Holiness Pope Francis
To the Executive Board of the World Food Programme
Rome, 13 June 2016

I thank Executive Director Ertharin Cousin for her invitation to inaugurate the 2016 annual meeting of the Executive Board of the World Food Programme, and for her kind words of welcome.  I greet Ambassador Stephanie Hochstetter Skinner-Klée, President of this important gathering of representatives of different governments called to promote concrete initiatives in the fight against hunger.  In offering a warm greeting to all of you, I express my gratitude for your many efforts and commitments in service of a cause that challenges us all: combatting the hunger from which so many of our brothers and sisters are suffering.

A few moments ago, I prayed before the Memorial Wall, a testimony to the sacrifice made by members of this organization who gave their lives so that, in complex and difficult situations, others would not go hungry.  We remember them best by continuing to fight for the great goal of “zero hunger”.  Those names, enshrined at the entrance of this building, are an eloquent sign that the WFP, far from a cold and anonymous institution, is an effective means for the international community to carry out ever more robust and productive activities. The credibility of an institution is not based on its declarations, but on the work accomplished by its members.

We live in an interconnected world marked by instant communications.  Geographical distances seem to be shrinking.  We can immediately know what is happening on the other side of the planet.  Communications technologies, by bringing us face to face with so many tragic situations, can help, and have helped, to mobilize responses of compassion and solidarity.  Paradoxically though, this apparent closeness created by the information highway seems daily to be breaking down.  An information overload is gradually leading to the “naturalization” of extreme poverty.  In other words, little by little we are growing immune to other people’s tragedies, seeing them as something “natural”.  We are bombarded by so many images that we see pain, but do not touch it; we hear weeping, but do not comfort it; we see thirst but do not satisfy it.  All those human lives turn into one more news story.  While the headlines may change, the pain, the hunger and the thirst remain; they do not go away.

This tendency – or temptation – demands something more of us.  It also makes us realize the fundamental role that institutions like your own play on the global scene.  Today we cannot be satisfied simply with being aware of the problems faced by many of our brothers and sisters.  It is not enough to offer broad reflections or engage in endless discussion, constantly repeating things everyone knows.  We need to “de-naturalize” extreme poverty, to stop seeing it as a statistic rather than a reality.  Why?  Because poverty has a face!  It has the face of a child; it has the face of a family; it has the face of people, young and old.  It has the face of widespread unemployment and lack of opportunity.  It has the face of forced migrations, and of empty or destroyed homes.

We cannot “naturalize” the fact that so many people are starving.  We cannot simply say that their situation is the result of blind fate and that nothing can be done about it.  Once poverty no longer has a face, we can yield to the temptation of discussing “hunger”, “food” and “violence” as concepts, without reference to the real people knocking on our doors today.  Without faces and stories, human lives become statistics and we run the risk of bureaucratizing the sufferings of others.  Bureaucracies shuffle papers; compassion deals with people.

Here I believe that we have much to do.  In addition to everything already being done, we need to work at “denaturalizing” and “debureaucratizing” the poverty and hunger of our brothers and sisters.  This requires us to intervene on different scales and levels, focusing on real people who are suffering and starving, while drawing upon an abundance of enthusiasm and potential that we need to help exploit.

During my visit to the FAO for the Second International Conference on Nutrition, I spoke of the paradox that, while there is enough food for everyone, yet “not everyone can eat”, even as we witness “waste, excessive consumption and the use of food for other purposes” (Address to the Plenary of the Conference [20 November 2014], 3).

Let us be clear.  Food shortage is not something natural, it is not a given, something obvious or self-evident.  The fact that today, well into the twenty-first century, so many people suffer from this scourge is due to a selfish and wrong distribution of resources, to the “merchandizing” of food.  The earth, abused and exploited, continues in many parts of the world to yield its fruits, offering us the best of itself.  The faces of the starving remind us that we have foiled its purposes.  We have turned a gift with a universal destination into a privilege enjoyed by a select few.  We have made the fruits of the earth – a gift to humanity – commodities for a few, thus engendering exclusion.  The consumerism in which our societies are immersed has made us grow accustomed to excess and to the daily waste of food.  At times we are no longer able even to see the just value of food, which goes far beyond mere economic parameters.  We need to be reminded that food discarded is, in a certain sense stolen, from the table of poor and the starving.  This reality invites us to reflect on the problem of unused and wasted food, and to identify ways and means which, by taking this problem seriously, can serve as a vehicle of solidarity and sharing with those most in need (cf. Catechesis, 5 June 2013).

We need to be frank: some issues have been bureaucratized.  Some activities have been “shelved”.  Everyone is aware of the present instability of the world situation.  Lately war and the threat of war have been uppermost in our minds and our discussions.  Thus, given the wide gamut of present conflicts, arms seem to have gained unprecedented importance, completely sidelining other ways of resolving the issues at hand.  This approach is so deeply engrained and taken for granted that it prevents food supplies from being distributed in war zones, in violation of the most fundamental and age-old principles and rules of international law.

We thus find ourselves faced with a strange paradox.  Whereas forms of aid and development projects are obstructed by involved and incomprehensible political decisions, skewed ideological visions and impenetrable customs barriers, weaponry is not.  It makes no difference where arms come from; they circulate with brazen and virtually absolute freedom in many parts of the world.  As a result, wars are fed, not persons.  In some cases, hunger itself is used as a weapon of war.  The death count multiplies because the number of people dying of hunger and thirst is added to that of battlefield casualties and the civilian victims of conflicts and attacks.

We are fully aware of this, yet we allow our conscience to be anesthetized.  We become desensitized.  Force then becomes our one way of acting, and power becomes our only goal.  Those who are most vulnerable not only suffer the effects of war but also see obstacles placed in the way of help.  Hence it is urgent to debureaucratize everything that keeps humanitarian assistance projects from being realized.  In this regard, you play a fundamental role, for we need true heroes capable of blazing trails, building bridges, opening channels concerned primarily with the faces of those who suffer.  Initiatives of the international community must similarly be directed to this end.

It is not a question of harmonizing interests that remain linked to narrow national interests or shameful forms of selfishness.  Rather, it is a matter of the member states decisively increasing their commitment to cooperate with the World Food Program.  In this way the WFP will not only be able to respond to urgent needs, but also to carry out sound projects and promote long-term development programmes, as requested by each of the governments and consonant with the needs of peoples.

Through its mission and its activities, the World Food Programme has shown that it is possible to coordinate scientific knowledge, technical decisions and practical actions with efforts aimed at obtaining resources and distributing them impartially, that is to say, with respect for the needs of those who receive them and the will of the donors.  This method, in those areas that are most depressed and poor, can and must ensure an appropriate development of local capacities and gradually eliminate external dependence, while at the same time making it possible to reduce food loss and to ensure that nothing goes to waste.  In a word, the WFP is an excellent example of how one can work throughout the world to eradicate hunger through a better allotment of human and material resources, strengthening the local community.  In this sense, I encourage you to move forward.  Do not grow weary or let problems dissuade you.  Believe in what you are doing and pursue it enthusiastically.  That is how the seed of generosity grows and bears abundant fruit.

The Catholic Church, in fidelity to her mission, wishes to cooperate with every initiative that defends and protects the dignity of persons, especially of those whose rights are violated.  In implementing this urgent priority of “zero hunger”, I assure you of our complete support and encouragement for the efforts in course.

“I was hungry and you gave me food; I was thirsty and you gave me something to drink”.  These words embody one of the axioms of Christianity.  Independent of creeds and convictions, they can serve as a golden rule for our peoples.  A people plays out its future by its ability to respond to the hunger and thirst of its brothers and sisters.  In that ability to come to the aid of the hungry and thirsty, we can measure the pulse of our humanity.  For this reason, I desire that the fight to eradicate the hunger and thirst of our brothers and sisters, and with our brothers and sisters, will continue to challenge us to seek creative solutions of change and transformation.  May Almighty God sustain with his blessing the work of your hands.