Our website is being upgraded and may show errors while we work. Please check back in a few hours.
Week of June 20, 2016

Pope Francis and the Crisis of People on the Move

On June 23, the Holy See, with the International Peace Institute and the Permanent Mission of Italy, co-sponsored at the IPI’s headquarters a day-long study on how to address large movements of refugees and migrants in anticipation of the High-Level Plenary Meeting on Addressing Large Movements of Refugees and Migrants to take place on September 19, 2016 at the United Nations. At the beginning of the meeting, Msgr. Joseph Grech gave introductory comments on behalf of the Holy See, which synthesized many of the words of Pope Francis on the subject. Here are his remarks.

Msgr. Joseph Grech
Permanent Observer Mission of the Holy See to the UN
People on the Move: How to Address Large Movements of Refugees and Migrants
International Peace Institute, New York
June 23, 2016

The Permanent Observer Mission of the Holy See to the UN is honored to be able to co-sponsor today’s discussion of how to address adequately the desperate plight of the enormous movements of refugees and migrants.

This is a situation for which Pope Francis has been crisscrossing our planet and raising his voice as loudly, persistently, and persuasively as he can to mobilize international political leaders, non-governmental organizations, the private sector, individual families and persons — in short, everyone — to take effective action.

When Pope Francis speaks, he comes back repeatedly to seven central themes that I believe are highly relevant to our conversation today.

The first is about the humanity of those who urgently need our help. Even though we are dealing with numbers of refugees and migrants unseen since World War II, Pope Francis has said that we cannot be overwhelmed by the shocking statistics, but must never forget that each is a person, with a face, with a name, with a story and family, trying to respond as best they can to their anguishing situation, to save their life and to improve it. The response to this massive humanitarian crisis, therefore, cannot happen only at the political, legislative, and economic levels. Our response must be humane, fraternal and just.

The second thing Pope Francis mentions concerns the state of danger many find themselves in even as they’ve moved. It’s dreadful enough that they have to flee their homes because of conflict, violence, poverty, and social exclusion, but then, along the journey, many face the dangers of trafficking, abuse, and starvation; and, upon arriving at their destination, rather than finding safe haven, solidarity, compassion and generosity, men, women, children, and even infants face discrimination, racism, extreme nationalism, suspicion, mistrust, legal vacuums and a lack of clear policies regulating their acceptance.

Third, he has focused on the need for an international network of collaboration to respond to the international scope of the problem, because, as he noted during his visit to the island of Lesbos in April, a solution can be achieved “only if we work together.” No country, he commented in his Message for the World Day for Migrants and Refugees in 2015, can “singlehandedly face the difficulties associated with this phenomenon, which is now so widespread that it affects every continent in the twofold movement of immigration and emigration.” Notwithstanding the generous and laudable efforts of certain governments, non-governmental agencies and religious organizations to meet the need, Pope Francis stressed that “a more decisive and constructive action is required, one that relies on a universal network of cooperation, based on safeguarding the dignity and centrality of every human person.”

Fourth, he has concentrated on the need to address the root causes of the migration and refugee crisis, especially the ongoing atrocities in the Middle East and the endemic poverty, corruption, violence and environmental problems in other parts of the world. It’s not enough to respond to emergencies as they arise. There must be, he said, a patient and persevering push to build peace through dialogue and reconciliation, so that people may be able to remain in and return to their homelands and abide in peace and security. This involves ensuring the rule of law, the defense of fundamental human rights, the protection of minorities, the prevention of human trafficking and smuggling.

Fifth, Pope Francis has stressed that public opinion must be “correctly formed” in order to prevent, among other things, “unwarranted fears and speculations detrimental to migrants” (2016 Message for the World Day of Migrants and Refugees). He would no doubt be pleased that today’s program has panels on framing the discussion and changing the narrative, because so often the frame and narrative of the present crisis are inimical to those most dramatically impacted by it.

Sixth, he has called on religious communities to increase their efforts to receive, assist and protect refugees of all faiths and to work together more concertedly so that the result can far exceed the sum of their laudable individual commitments and efforts. The contribution of Churches and religious communities, he has said, is “indispensable” to the eventual solution.

Finally, and most poignantly, he has underlined that to some extent all of us need to overcome our desensitization to the magnitude of the problem or even our practical indifference and weep over the present situation: weep that so many of our seas have become tombs for moms, for dads, for children; weep that so many mountainous and desert paths have become burial grounds even for orphans and the elderly; weep that because of the silence and complicity of so many, countless numbers of people with faces and families are dying of starvation, suffocation, unspeakable violence and shipwreck each day.

When Pope Francis traveled in July 2013 to the small island of Lampedusa, where over 25,000 people have died over the last 20 years trying to achieve safe haven, he said, in one of the most unforgettable homilies of his pontificate: “These brothers and sisters of ours were trying to escape difficult situations to find some serenity and peace; they were looking for a better place for themselves and their families, but instead they found death. How often do such people fail to find understanding, fail to find acceptance, fail to find solidarity. … I would like to ask… ‘Has any one of us wept because of this situation and others like it?’ Has any one of us grieved for the death of these brothers and sisters? Has any one of us wept for these persons who were on the boat? For the young mothers carrying their babies? For these men who were looking for a means of supporting their families? We are a society,” he concluded, “that has forgotten how to weep, how to experience compassion: … the globalization of indifference has taken from us the ability to weep!”

When he visited Ciudad Juarez at the border of Mexico and the United States onFebruary 17, he said that these tears cannot remain merely those of compassion or immense sadness. He said that they must become, for all of us and the world, tears of repentance. Speaking not only to Catholics but also to representatives of other religious groups, he said, “Let us together ask our God for the gift of conversion, the gift of tears, … [and] open hearts [before] the suffering faces of countless men and women,” a conversion that would lead us to work to confront effectively the crisis that becomes more dramatic and urgent by the day.

I’d like to finish with something that Pope Francis said at the refugee camp in Lesbos. Speaking to the migrants who were fortunate enough to survive the treacherous passage by land and sea to get to the island, he said, “We Christians love to tell the story of the Good Samaritan, a foreigner who saw a man in need and immediately stopped to help. For us, it is a story about God’s mercy that is meant for everyone. … It is also a summons to show that same mercy to those in need.”

In that Gospel story, two people who would have been expected to help a Jewish man who had been brutally assaulted and left in a ditch to die, rather than stopping, kept their distance and kept on walking, deeming whatever else they had on their agendas that day far more important than helping someone in a desperate plight who would perish without assistance. Instead it was an unlikely Samaritan, whose people had many fierce theological and political disagreements with the Jews, who crossed the road, sacrificed his time, his money and his very self in order to try to save the man’s life. He became, Jesus said, the answer to the question, “Who is my neighbor?”

Pope Francis has been trying to awaken all of us to recognize that, because of the desperate migration and refugee crisis, the whole world has become our neighborhood, and that it’s time for all of us urgently to cross the road — and to bring others with us.

Thank you for your kind attention.

The trafficking of persons is a crime that shames us all. Pope Francis has called it "a crime against humanity" and "an open wound on the body of contemporary society." It thrives on the silence and complicity of many sectors of society as well as on the desperation that many who live in poverty experience throughout their life. With false promises of a better life and financial security, traffickers lure innocent victims into a web of pain and suffering.

Of the 21 million people trafficked each year thoughout the world it is estimated that 5.5 million are children. They often experience intense suffering due to violence, exploitation and abuse at the hands of unscrupulous traffickers and employers. Trafficked children and youth can be found in prostitution, pornography, sex tourism, forced marriage, sweatshop work, begging, child soldiers and many sectors of agriculture. This needs to stop.

A panel of experts will address some of the key dimensions of this crime against children and youth that has led to trafficking and other forms of modern day slavery. Included in the discussion will be the following topics: 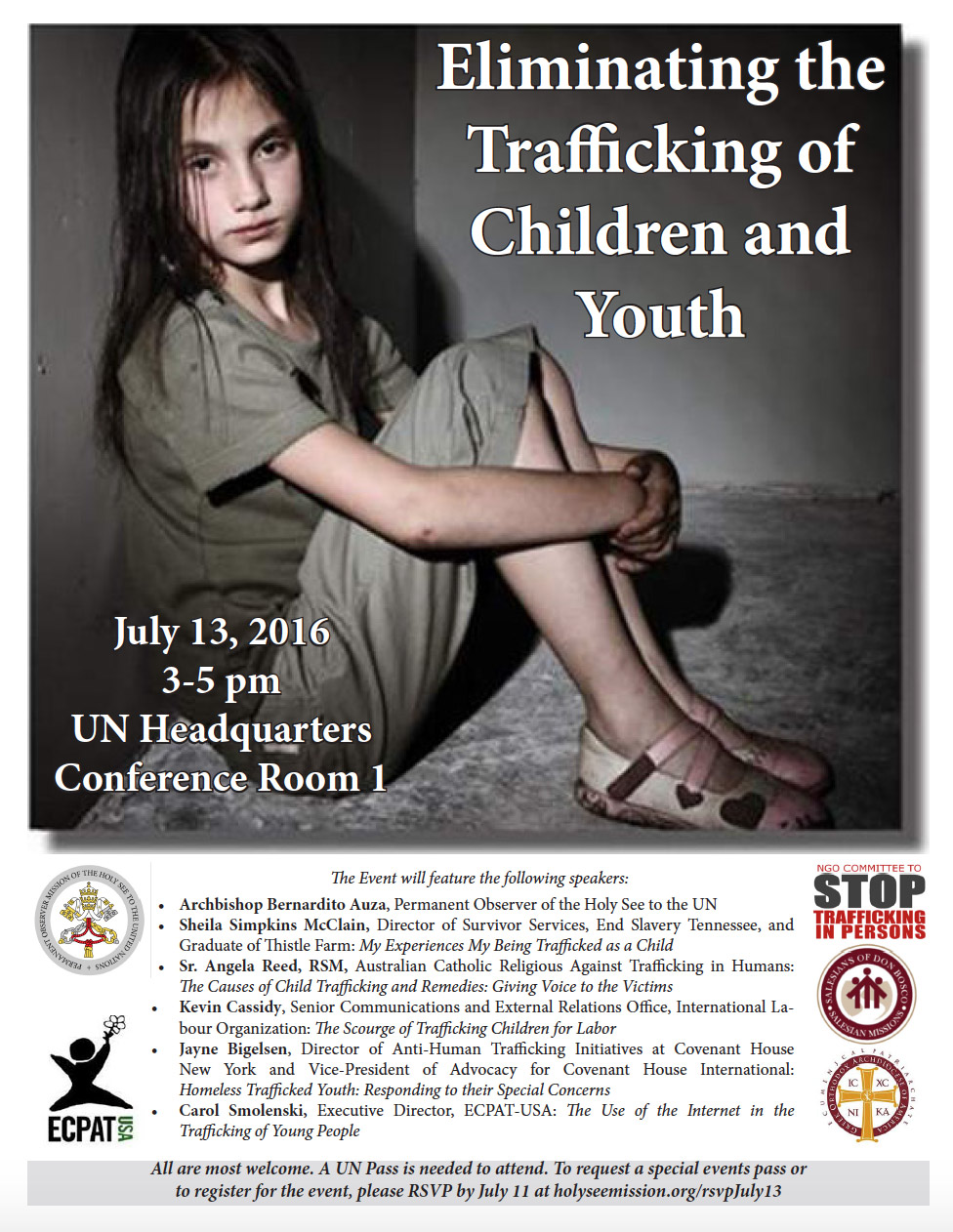 Prayer Service for Peace in the Middle East

Sponsored by the Permanent Observer Mission of the Holy See to the UN
Together with the Archdiocese of New York and the Eparchy of St. Maron of Brooklyn

You are most cordially invited to a Prayer Service for Peace in the Middle East on Monday, June 27, 2016 at 6 pm at the Church of the Holy Family in Manhattan (315 E. 47th Street, between 1st and 2nd Avenues).

It will take place in the presence of His Eminence and Beatitude Bechara Peter Cardinal Rai, Maronite Patriarch of Lebanon and All the East, as well as Cardinal Timothy Dolan of New York, Bishop Gregory Mansour of the Eparchy of St. Maron in Brooklyn, and members of the Permanent Observer Mission of the Holy See to the United Nations.

All are welcome. Those planning to attend are asked to RSVP ahttp://archnyprayforpeace.eventbrite.com. UN dignitaries are asked to inform the Permanent Observer Mission (212.370.7885;office@holyseemission.org) so that proper seating may be reserved. 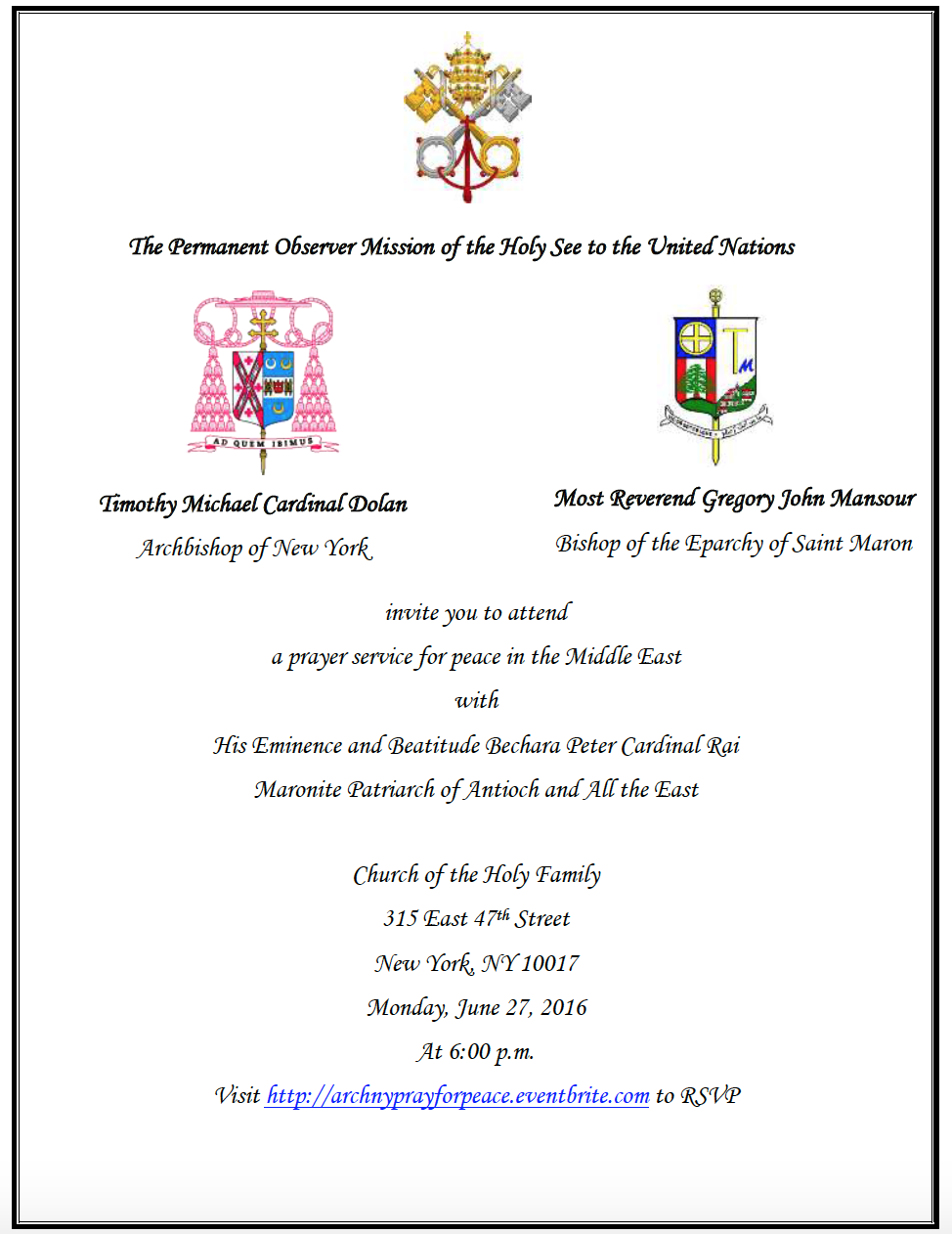