Our website is being upgraded and may show errors while we work. Please check back in a few hours.
Week of May 8, 2017 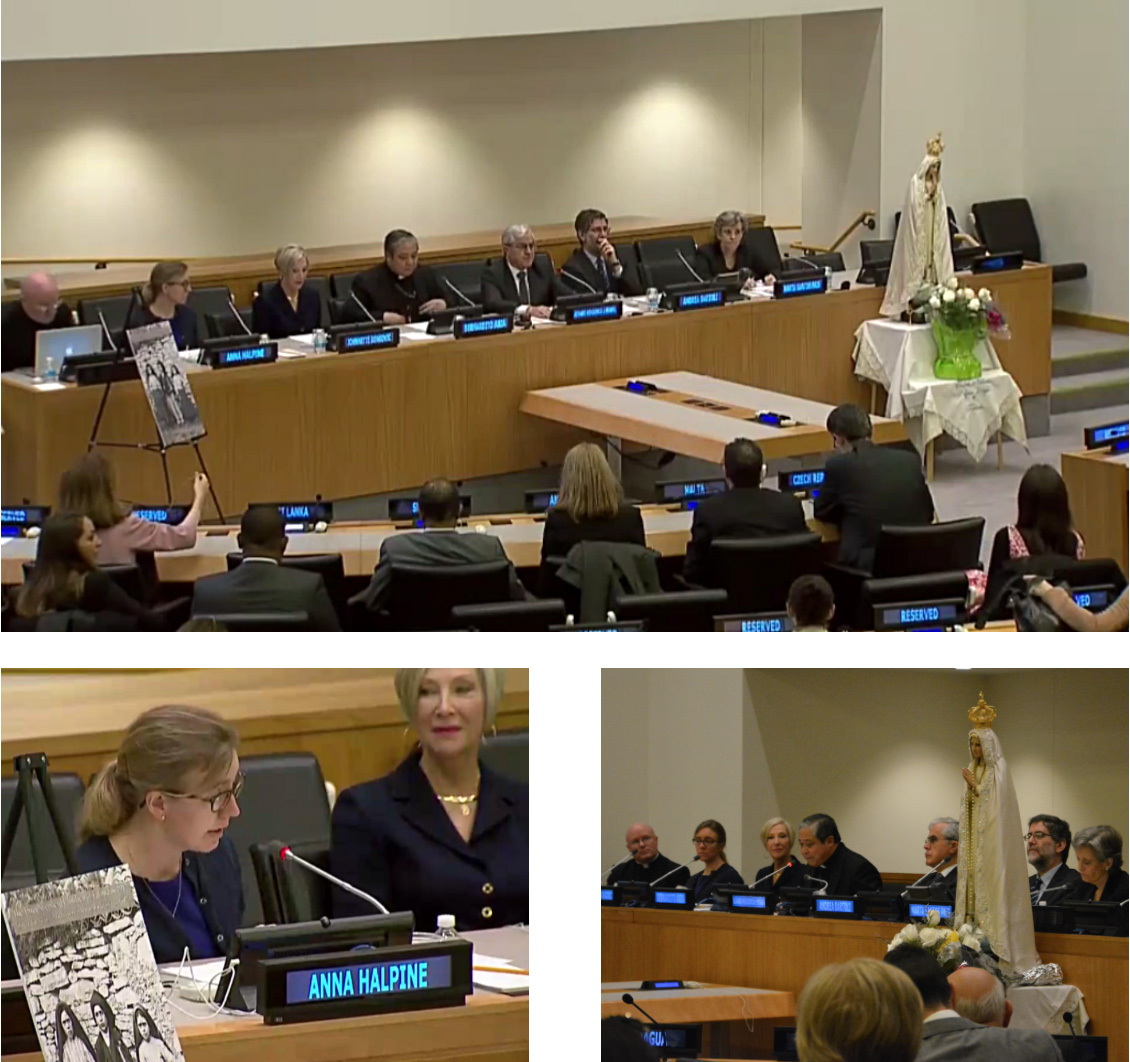 On May 12, the eve of the 100th Anniversary of the apparitions of Our Lady of Fatima, 600 people joined the Permanent Observer Mission of the Holy See to the UN and the Permanent Mission of Portugal at the UN for a commemorative event entitled “The Centenary of Fatima and the Enduring Relevance of its Message for Peace.”

Archbishop Auza, Permanent Observer of the Holy See, noted that Pope Francis was concurrently arriving in Portugal to take part in celebrations to commemorate the day that the three small shepherd children testified to seeing a “woman in white” who brought a message of peace. In the UN conference room, a special replica of the statue of Our Lady in Fatima, blessed by Pope Pius XII seventy years ago, made its second visit to the UN, where it had been brought once before in 1952. Two of these children, Jacinta and Francisco, were to be canonized saints by Pope Francis on May 13.

“We hope that the prayers for peace that have been made before this statue in the intervening seven decades might be heard in a particular way for peace in the world today where violence is raging,” he said, calling for prayer to for an end to the war in Syria, for violence to cease in Africa, the Middle East, Ukraine, and the Korean Peninsula, as well as an end to terrorism, religious, ethnic and racial persecution, organized crime and human trafficking and modern slavery.

“It’s astonishing that Mary would preferentially come, not to heads of state or diplomats or religious leaders directly to enlist them in the cause of peace, but to three simple children without much education and entrust them with a message, secrets and a special task for the cause of peace and the good of souls and the world,” he said. “Everyone has a role, even those whom the world considers insignificant, or incapable or too young. If the shepherd children could be chosen, and they could respond as wholeheartedly as they did, it’s a sign of what is possible for everyone.”

Ambassador Alvaro Mendonca e Moura, Permanent Representative of Portugal to the UN, said Fatima is a significant element of Portuguese culture and religious identity, and noted the shrine has become an international gathering place for people of diverse faith backgrounds.

“Fatima and the image of Our Lady of Fatima are a forceful message that put us and our own personal history in question and asks us to walk the path to peace,” he said.

Andrea Bartoli, Dean of Seton Hall School of Diplomacy and International Relations, said Mary’s message of peace to the children of Fatima is especially relevant for the most marginalized, who experience the most significant impact of war and violence. He highlighted in particular the plight of the millions of refugees and displaced persons in the world today.

Peace, he said, comes by taking on a life of humility and simplicity, and by listening to the voice of the suffering and most marginalized in society.

Johnnette Benvokic, EWTN Television host and Founder of Women of Grace, emphasized the overlapping goals that both the UN Charter and Catholic Church strive to achieve, such as ending the scourge of war and upholding human dignity.

“I think as a Catholic that these same sentiments surely must have been in the heart of the Blessed Virgin Mary, and in the heart of God in sending her, when she appeared in Fatima a century ago,” Benvokic said, noting the important natural gifts women as peacemakers, and encouraging women of all faiths to let Mary’s message in Fatima influence their identity as peacebuilders and peacekeepers.

“Not just for Christian believers, Mary is the quintessential icon for woman,” she said. “All people can be grateful for the example of Mary’s maternal mediation to restore peace to the human family.”

Marta Santos Pais, Special Representative of the Secretary General on Violence Against Children, said statistics show children are highly affected by violence, noting every five minutes a child dies as a result of violence. She said the global community has a responsibility for eradicating violence, and that the three little shepherd children in Fatima illustrate the special role that even children can have as peacebuilders.

“By investing in children we can end violence for everyone,” she said. “Just like the three young shepherds, children around the world create hope and the sense that change starts with each one of us; youth want to build a world where each and every child where everyone can live lives of peace, hope and resilience.”

Anna Halpine, Founder of the World Youth Alliance, an organization dedicated to training and motivating young people from around the world to contribute to the promotion and protection of human dignity, said the children, made a historical contribution to peace, noting Portugal never entered the Second World War.

“One of the treasures of the Shrine at Fatima is the great crown of jewels created in 1941, out of an offering of the jewels of the women of Portugal in thanksgiving for being spared WWII,” Halpine said. “The world was not spared, but the homeland of the little shepherds was, and the women of Portugal remembered the Woman from Fatima and the three small children who had been promised peace in return for prayer and sacrifice.”

She said that Pope John Paul II, whose assassination attempt is thought to have been predicted to the children of Fatima, attributed his miraculous recovery to Our Lady of Fatima, and added the bullet that pierced five of his vital organs among the crown of jewels.

“Today,” Halpine said, "the great and the powerful bow before three shepherd children, and their mission of peace. Kings, Queens, Presidents and Popes have gone to them as an example, and in thanksgiving. They have been humbled. In front of children, not much more than infants, in homespun clothes, without wit or wisdom or power, these children have instructed us in the ways of peace. And they have achieved them. Their approach is radically different from the approaches normally taken in the halls of the UN, but few, if any, here, can boast the successes in building peace that these three children have had. Today, for this hour, the powerful study at the feet of the shepherd children. Maybe new lessons will be learned." 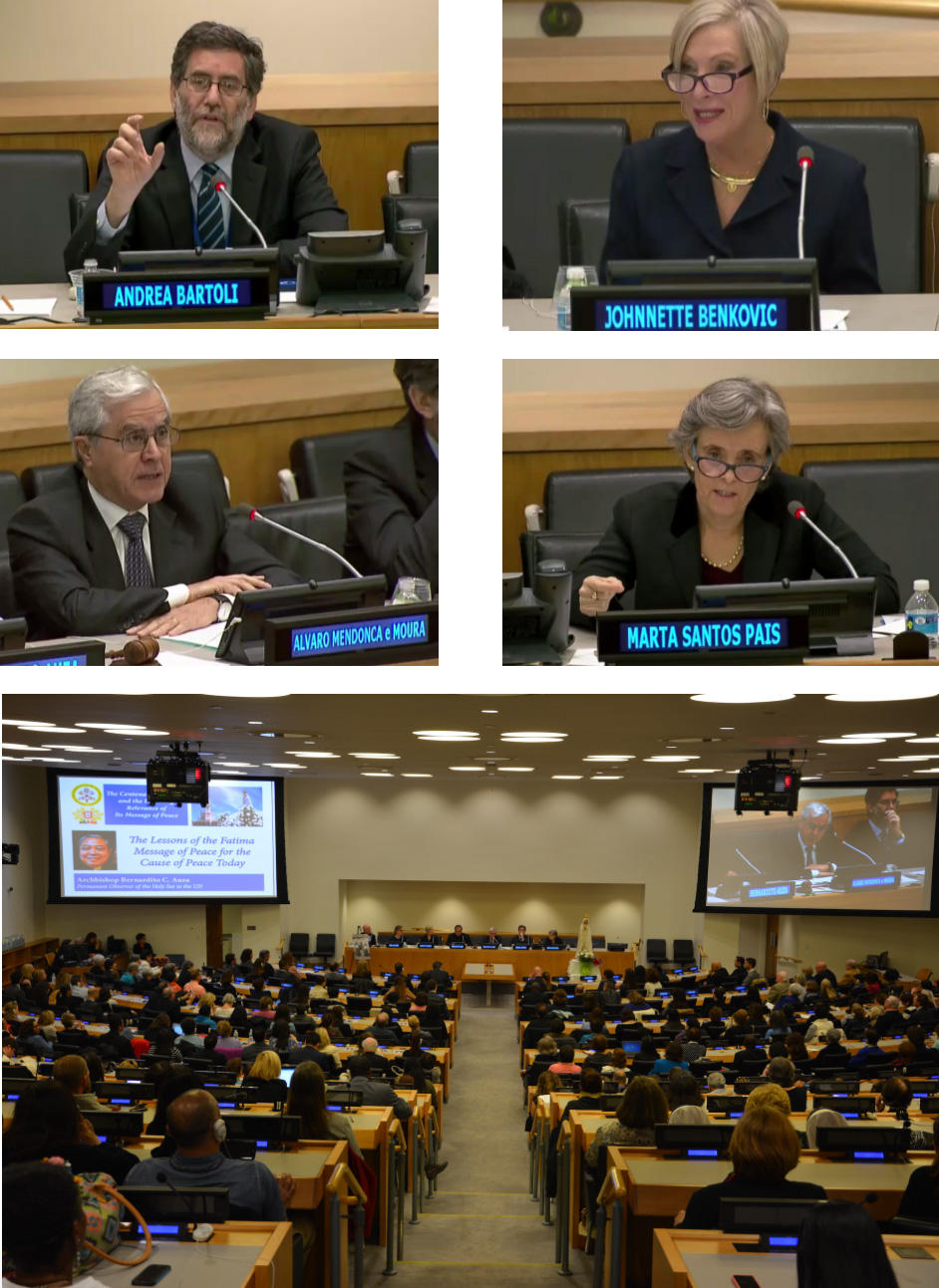 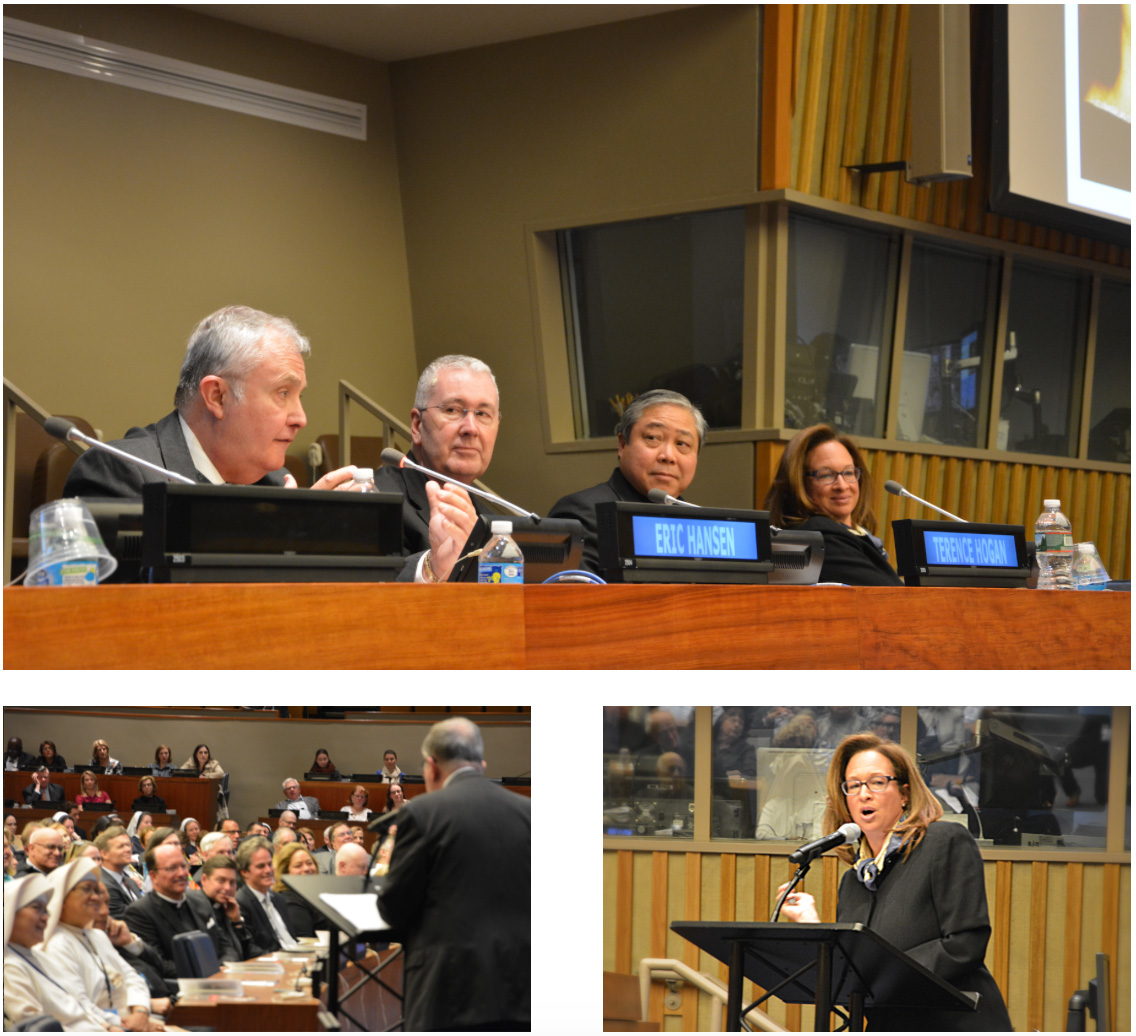 On May 10, diplomats, art enthusiasts and world-renowned art experts gathered at the UN to pay tribute to the work of Italian Renaissance artist Raffaello Sanzio da Urbino, known more commonly as Raphael, who is responsible for much of the most celebrated works in the Vatican Museums, at an event entitled “An Evening with Raphael,” organized by the Permanent Observer Mission of the Holy See to the UN, together with the New York Chapter of the Patrons of the Arts in the Vatican Museums.

Archbishop Bernardito Auza, Permanent Observer of the Holy See to the United Nations, highlighted the important role the art and beauty have in contributing to the culture "without which the lofty goals to advance peace, foster sustainable development, and protect and advance human rights and dignity cannot be achieved. "

“We talk a lot about peace and security, human rights and development. But we hardly, if ever, talk about art and beauty as crucial in the achievement of the vision and mission of the UN,” he said. “Beauty also has the capacity to unite people across generations and continents in shared admiration, establishing a transcendent common good that can be the foundation for future conversation, cooperation and even contemplation. That is why the promotion of beauty must always remain a crucial part of the work of the nations of the world.”

Drawing from Pope John Paul II’s Letter to Artists, Archbishop Auza said, “People of today and tomorrow need this enthusiasm of wonder if they are to meet and master the crucial challenges that stand before us,” noting John Paul II praised the genius of Raphael, and called his work “a remarkably powerful expression of sacred art, rising to heights of imperishable aesthetic and religious excellence.”

“The restoration and preservation of these wonderful treasures that are present in the Vatican Museums is because of the kindness of the patrons,” he said.

Professor Elizabeth Lev, Art Historian and Consultant for Art and Faith for the Vatican Museums, continuously connected Raphael’s art to the theme of dialogue as she gave a detailed history and analysis of his life and work.

“Everything in the museum is intended to create a conversation between past and present,” she said. “The purpose of this evening too is to bring the idea of beauty and art as a space and theme for dialogue.”

She said Raphael is well-known among art historians for his attitude as a team player and mentor, noting many of his students became renowned artists in their own right.

“Raphael would never travel south of Rome or north of Florence, yet he brings all of us together today of different backgrounds different countries to admire beauty,” Professor Lev said. “His love for creativity, competition and collaboration makes him one of history’s most powerful communicators.”

Eric Hansen, expert in Christian art, shed light on Raphael’s masterpieces in the Vatican that are often unseen because their location is not accessible for public viewing. These works include the ornate outdoor corridors, known as Raphael’s Loggias, that bridge private spaces in the Apostolic Palaces. While describing Raphael’s “hidden art,” he also shed light into his “hidden life,” highlighting the artist’s aptitude for collaboration and joy.

Hansen said although much of Raphael’s art is solemn, he also touched the human person by using humor in his work.

“We never give him the credit he deserves for being playful,” Hansen said, while describing some of the artist’s more jovial work, such as his images of animals, which he said ignite both bewilderment and laughter among observers.

“He was proud of his workshop, and he loved them as friends,” Hansen said, noting the “master of masters and Father of the Renaissance” once said, “You work with others to create a masterpiece.”

Thank you for your interest in our conferences and events. These are the events for which we are presently taking sign-ups. Please contact event@holyseemission.org for more information. 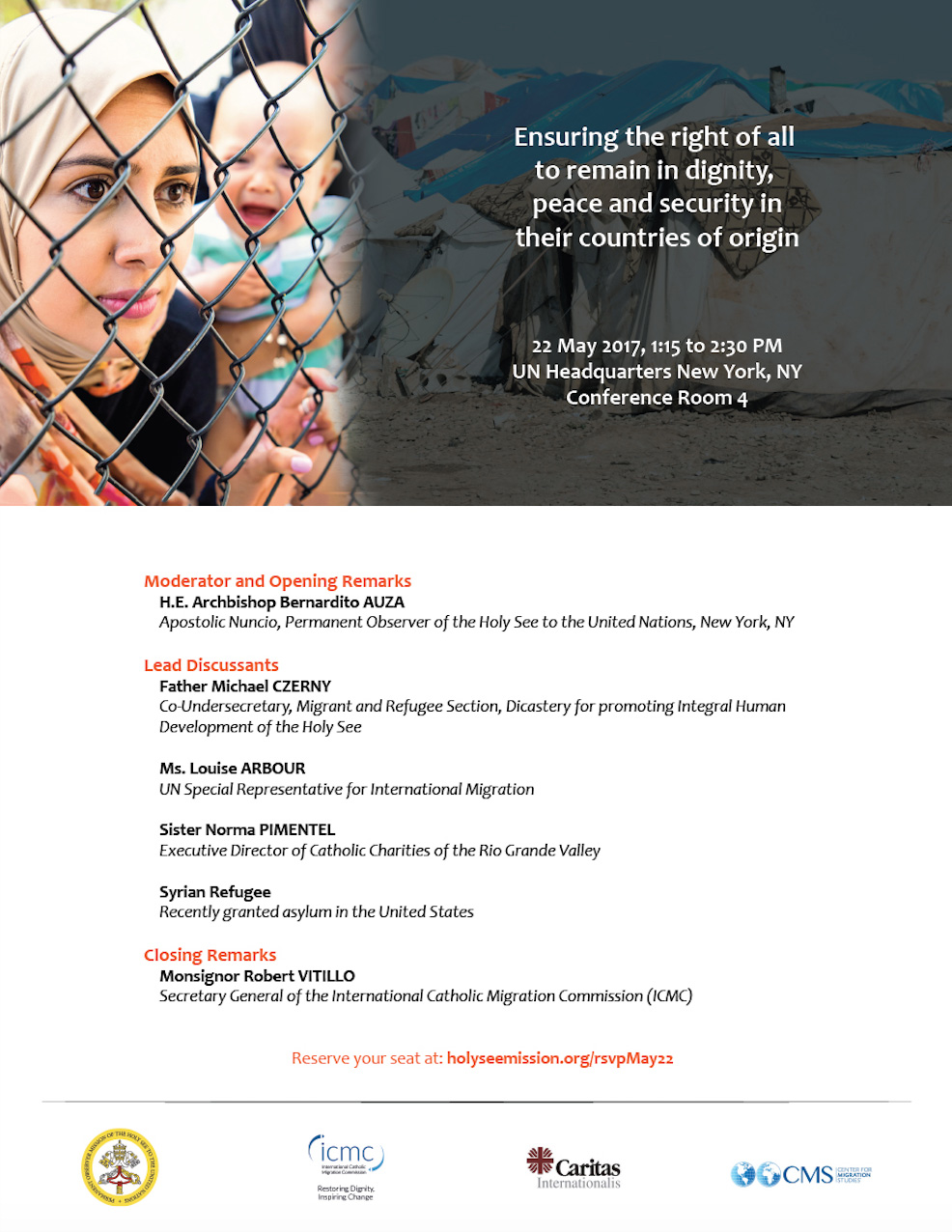 May 22: Ensuring the Right of all to Remain in Dignity, Peace and Security in their Country of Origin

RSVP by May 18 at holyseemission.org/rsvpMay22