Our website is being upgraded and may show errors while we work. Please check back in a few hours.
Week of June 19, 2017

This week the Holy See Mission delivered one statement at the UN, and three statements at the Organization of American States.

On June 23, the Permanent Observer Mission of the Holy See to the UN prepared a statement for an informal multi-stakeholder hearing to prepare for the High-level Plenary Meeting to Review the Global Plan of Action to Combat Trafficking in Persons, which will take place in September. The statement was to be delivered during Panel 1, dedicated to a human-rights-based, survivor-centered approach to trafficking in persons, but the panel ran out of time before it was delivered.

In its statement, the Holy See said that while many factors contribute to the various forms of trafficking, such as poverty, lack of adequate employment, the migration and refugee crisis, and other economic and political components, the root cause of trafficking of persons is the dehumanization of people as objects or commodities. The Holy See also said that while defending the human rights of victims and survivors is key, it is not enough. The international community must go beyond  to address the legal, economic, educational, medical and physiological needs of victims for their full rehabilitation and reintegration into society.

On June 21, Archbishop Bernardito Auza, Permanent Observer of the Holy See to the Organization of American States (OAS), gave an intervention during the 47th Session of the General Assembly of the OAS in an open discussion on the theme of Migration.

In his statement, Archbishop Auza said that the welfare of migrants and refugees is a key priority for Pope Francis, and stressed the importance of addressing the drivers of migration such as conflict, violence, economic and political instability, drug trafficking, and natural disasters, in order to find sustainable solutions for the migration crisis. He also noted the profound concern Pope Francis has for unaccompanied child migrants and children separated from their parents, and called on governments and citizens to provide for their safety and overall well being.

Human Rights, Democracy
and the Rule of Law
Organization of American States

On June 21, Archbishop Bernardito Auza, Permanent Observer of the Holy See to the Organization of American States, gave an intervention during the 47th Session of the General Assembly of the OAS during a debate on Human Rights, Democracy and the Rule of Law.

In his statement, Archbishop Auza said that at the heart of human rights is the recognition that all people have inherent equal dignity and worth, flowing from their fundamental right to life. The pillars of integral human development, he stated, all have their common foundation in the right to life. Concern for the neediest, he said, is the yardstick to measure the success or failure of the 2030 Agenda for Sustainable Development. Archbishop Auza also focused on the role of those in the judicial process, the independence and integrity of the judiciary, the rights of those subject to legal action, and the right to freedom of opinion and expression.

The Situation in Venezuela
Organization of American States

In his statement, Archbishop Auza called for a peaceful, lasting, and viable solution to the crisis in Venezuela, including urgent measures to alleviate the food and medicine shortage the people of Venezuela are suffering, to ensure Catholic institutions are able to assist and provide aid, for parties to agree upon an election date, and to accelerate the process of releasing detainees.

His statement, delivered in Spanish, can be found here.

In this edition of the Newsletter, we will continue the series of brief profiles and interviews with members of the staff of the Permanent Observer Mission of the Holy See to the UN, who can provide a perspective of the work of the Mission “from the inside.” Today we will highlight Holy See negotiator, Timothy Herrmann, who recently participated in a seminar on Migration at the Vatican, to prepare for the Global Compact on Safe, Orderly Migration Flows. 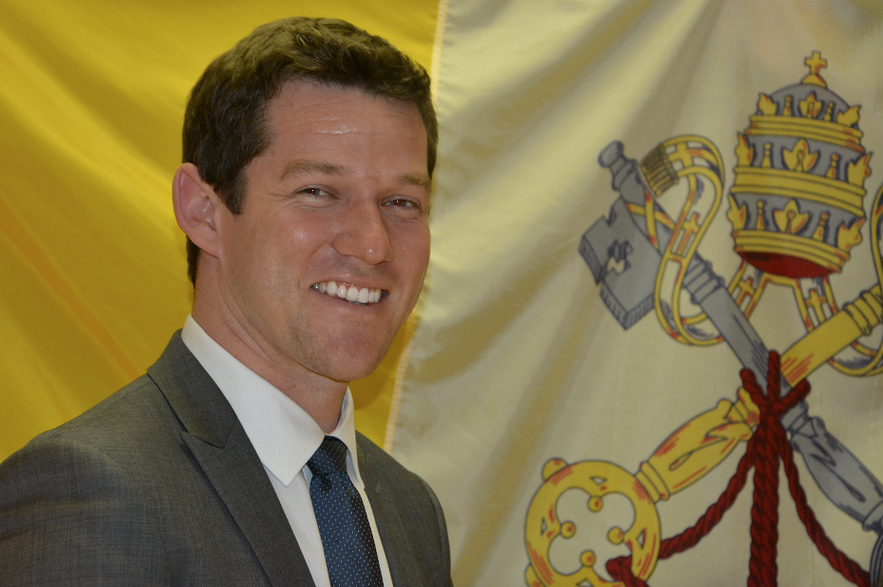 Q: What is your background?

I was born and raised in Modesto, California.  I had a very strong experience of the faith growing up. I was baptized in the Serbian Orthodox Church, but we often went to Catholic Church, and I officially became a Catholic when I was 15. I have only one sibling, my sister Leslie, but I have a lot of cousins. I was valedictorian in high school, and did mock trial, speech and acting. I think my favorite speech competition was impromptu. I enjoy thinking on my feet.

I went to UC Berkeley and was initially studying Russian History and taking Russian. The idea was eventually to learn Serbian, but I never actually managed to get through Russian in the end. I think my professor was merciful and passed me! Even without Russian, I still wanted to study abroad so I picked up Spanish classes again. Eventually I studied abroad in Chile, and when I came back to Berkeley, I changed my major to Latin American politics. I also realized I was much better at Spanish than Russian, so I decided to try my luck with other Latin languages like Portuguese and Italian. After graduation, I followed a girl to Italy and did my master's at the Catholic University in Milan. During that period I received a Fulbright Scholarship to finish my thesis in Colombia on The Supply and Demand of Regional Integration in Latin America.

Q: What is your role at mission?

I follow development and human rights issues, mostly on the Second and Third Committees.

I have always felt that my job is to represent the Holy Father faithfully at the UN, and to communicate what he has to say, what the Church has to say, and to make it accessible to others. What the Holy Father has to say is extremely relevant, but communicating that relevance is an art. It’s like being a translator. The challenge is how to communicate the truth of the Church in a way that is accessible to others, without losing its meaning. That is always the challenge with translation: how to communicate in a way that is faithful to the original text or discourse.  The language of the Church is the language of man, but it often seems like man has forgotten himself. The Church has a unique ability to understand man in his fullness, and doesn’t reduce man to what’s “politically” or even diplomatically possible. To me, the most important part of the work is communicating our message by establishing personal relationships — friendships really —  so that people can can not only see but experience that the Church is reasonable. My success as a negotiator is 90 percent the relationships I build, and 10 percent my ability to “say the right thing” in the negotiation room.

Q: What was the purpose of the seminar on Migration at the Vatican?

The Holy Father recently created a new Dicastery for Promoting Integral Human Development, and he placed himself as the head of the subsection on migration. So, for the Holy Father, migrants and refugees are among the top priorities for the Church.  So far, there is no international framework governing international cooperation on migration. Next February, however, the international community will attempt to put one together when it begins negotiations on the Global Compact for safe, orderly and regular migration. The meeting in Rome brought together diplomats and the point people on migration and refugees for the Bishops' conferences all over the world to help the Vatican solidify its strategy to address the migration crisis and engage in conversation on this new migration framework.

Everyone is dealing with the migration crisis — or may even have experience as a migrant. Everyday Syrian refugees, migrants from Latin America, and others are forced to leave their homes because of violence, persecution, natural disasters and for economic reasons. Countless children are making the journey without their parents, afraid. It touches us all in some way. The Church is one of the loudest voices for the world’s vulnerable. That’s why the Vaticanhad the bishops comes together to talk about these very real issues.

Q: What was the takeaway?

What was the most striking about the meeting is how the Church is of one mind in its approach to the crisis. It is very clear that even though the bishops are starting from their local experience, and I am starting, for example, from a more international perspective, we all agree with each other. The hard part is how to translate what we discussed so that it will make sense at the international level. All the same, I can say that I was impressed at how impressively coherent the approach of the Church to the migration crisis really is.

The recurring theme and basis for the strategy we will ultimately propose come from the Holy Father’s own words: namely that our response to all migrants, regardless of their migratory status, should be “to welcome, to protect, to promote and to integrate."  We are really concerned with protecting the human rights of migrants and treating them with dignity through their entire journey.