Our website is being upgraded and may show errors while we work. Please check back in a few hours.
Week of July 10, 2017

This week the Holy See Mission delivered one statement at the UN.

On July 14, Archbishop Auza, Permanent Observer of the Holy See Mission to the UN, delivered a statement at a panel discussion dedicated to the launch of the Plan of Action for Religious Leaders and Actors to Prevent Incitement to Violence that Could Lead to Atrocity Crimes.

In his statement, Archbishop Auza said religious leaders play a major role in preventing atrocity crimes by promoting peace and interreligious dialogue. They influence the behaviors and mentalities of those in their communities, he added, but do not have the resources necessary to stop atrocity crimes. Nation states have the primary responsibility to protect populations from atrocity crimes, with the assistance of the international community. Religious leaders not only prevent incitement to violence through interreligious dialogue, but can foster the virtue necessary to build “peaceful and inclusive societies in which atrocity crimes are ethically unimaginable.” 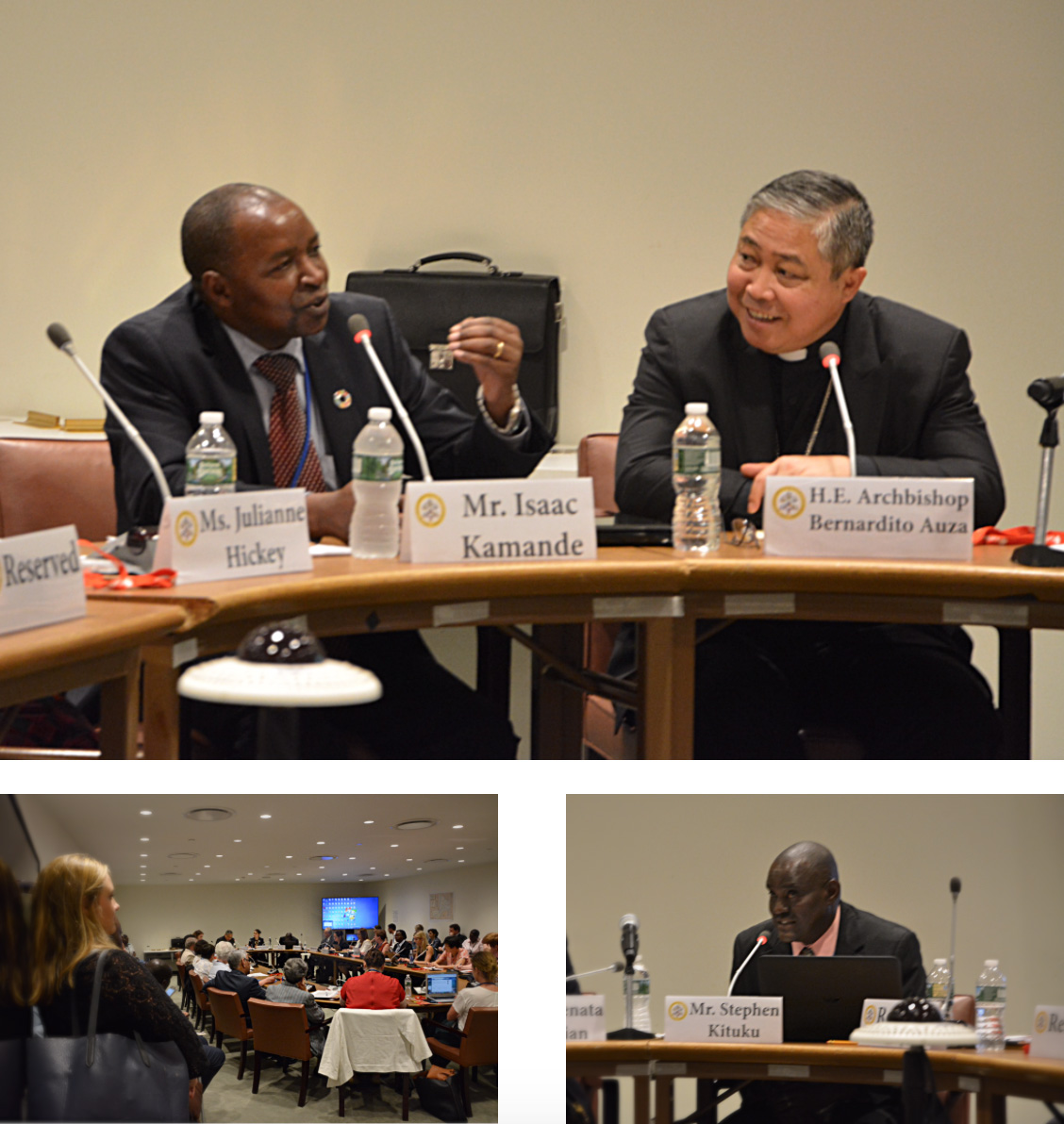 Caring for the most vulnerable is essential to achieving the Sustainable Development Goals, according to experts at a Holy See event.

On July 12, the Holy See Mission sponsored an event entitled “Caritas Agencies and Governments Cooperating to Achieve Goal 2 and Goal 14: Implementing the Agenda 2030 in Kenya and Oceania” together with Caritas Internationalis during the 2017 High Level Political Forum at UN Headquarters.

The event focused on the work of Caritas in Kenya and Oceania, in achieving Sustainable Development Goal (SDG) Goal 2, on accomplishing zero hunger, and SDG 14, on the conservation and sustainable use of the world’s oceans.

Archbishop Auza said the work of Caritas in Kenya and Oceania are two examples of the work Catholic agencies do on the ground to carry out the Christian imperative of love and to realize the guiding principle of the sustainable development goals, leaving no one behind. Archbishop Auza praised Caritas for contributing to the achievement of the SDGs with an understanding of humanity that fosters integral human development, which takes into account the human, social, cultural, environmental and spiritual aspects of development, alongside economic progress.

Drawing on the words of Pope Francis in his 2015 Address to the General Assembly, Archbishop Auza said the SDGs are “an important sign of hope” that can only be realized if they are fairly and effectively put into action with the hard work necessary to achieve them.

“Technical solutions are not enough. An integral approach is needed,” he said. “It’s not enough to provide people with their daily bread through increased agricultural production and more effective distribution of food supplies. We also have to recognize that people have a right to be free of poverty and hunger and the whole human family has a duty to care for their brothers and sisters when they are starving and malnourished. That is the ethical approach Caritas is taking.”

Renata Rubian, from the United Nations Development Programme, moderated the panel. She said that solidarity is key for achieving food security and protecting life under water, emphasizing the importance of partnerships.

Isaac Kamande, Director of Projects and Programmes for Kenya’s Ministry of Devolution and Planning, said that in addition to investing in large scale irrigation projects and other agricultural advancements to move towards zero hunger, Kenya has focused on building partnerships among different key players like businesses and other non-governmental organizations.

“We are trying to domesticate and localize the tools we are using for the national planning,” he said. “We don’t forget the household,” he added, emphasizing the importance of family and education in achieving the country’s goals.

Stephen Kituku, Director of Caritas Kenya, said because 80 percent of Kenya’s land mass is characterized as arid due to low rainfall and prolonged drought, Caritas Kenya looks for ways to use water efficiently to increase agriculture production. Kituku said they also work to empower farmers and women through faith-based partnerships, decreasing the risk for agricultural investment, and educating the public on the link between agriculture and nutrition.

“Empowering women sets a foundation for a lifetime in development,” he said, noting the particular importance they place on helping women access good nutrition, especially during pregnancy. 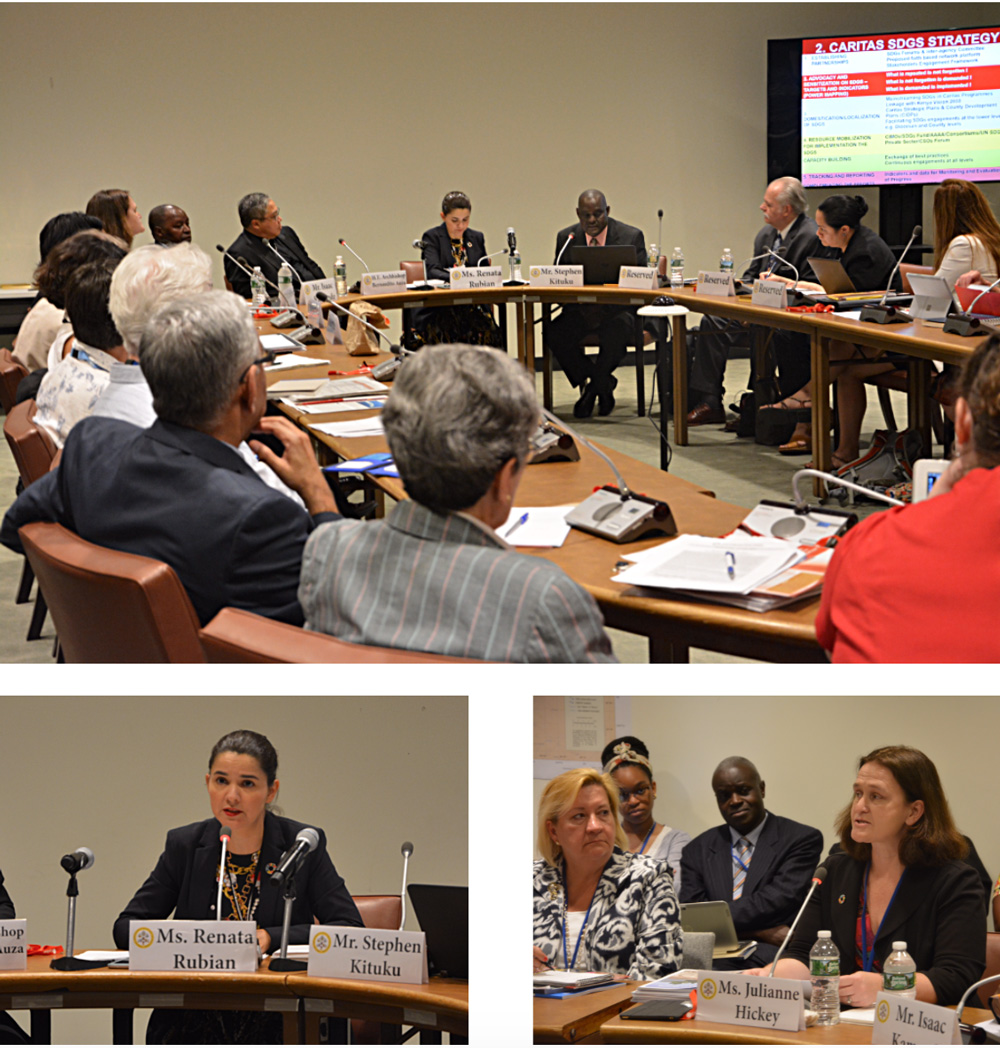 Julianne Hickey, director of Caritas Aotearoa New Zealand said the livelihood of the local people of Oceania depends on the Pacific Ocean, but much of the time, the financing the international community sets aside for climate-related projects often does not reach those most vulnerable to changes in the environment.  She said she works to give a voice to the voiceless by listening to the locals and sharing the issues most important to the those at coastal grassroots — issues that include appropriate funding, illegal fishing, and the threat of deep sea mining to the livelihoods of fishermen and populations that depend on fish for survival.

“The SDGs must uphold the dignity of all Pacific peoples,” she said. “We need to ensure the most vulnerable benefit from these commitments.”

Miriama Herenui Betham-Malielegaoi, the Deputy Permanent Representative of the Samoan Mission to the UN, said the country has undertaken 12 voluntary commitments to achieve SDG 14 to protect the Pacific Ocean, and is working to inform governments and people in the Pacific on ways to exercise stewardship over the oceans. 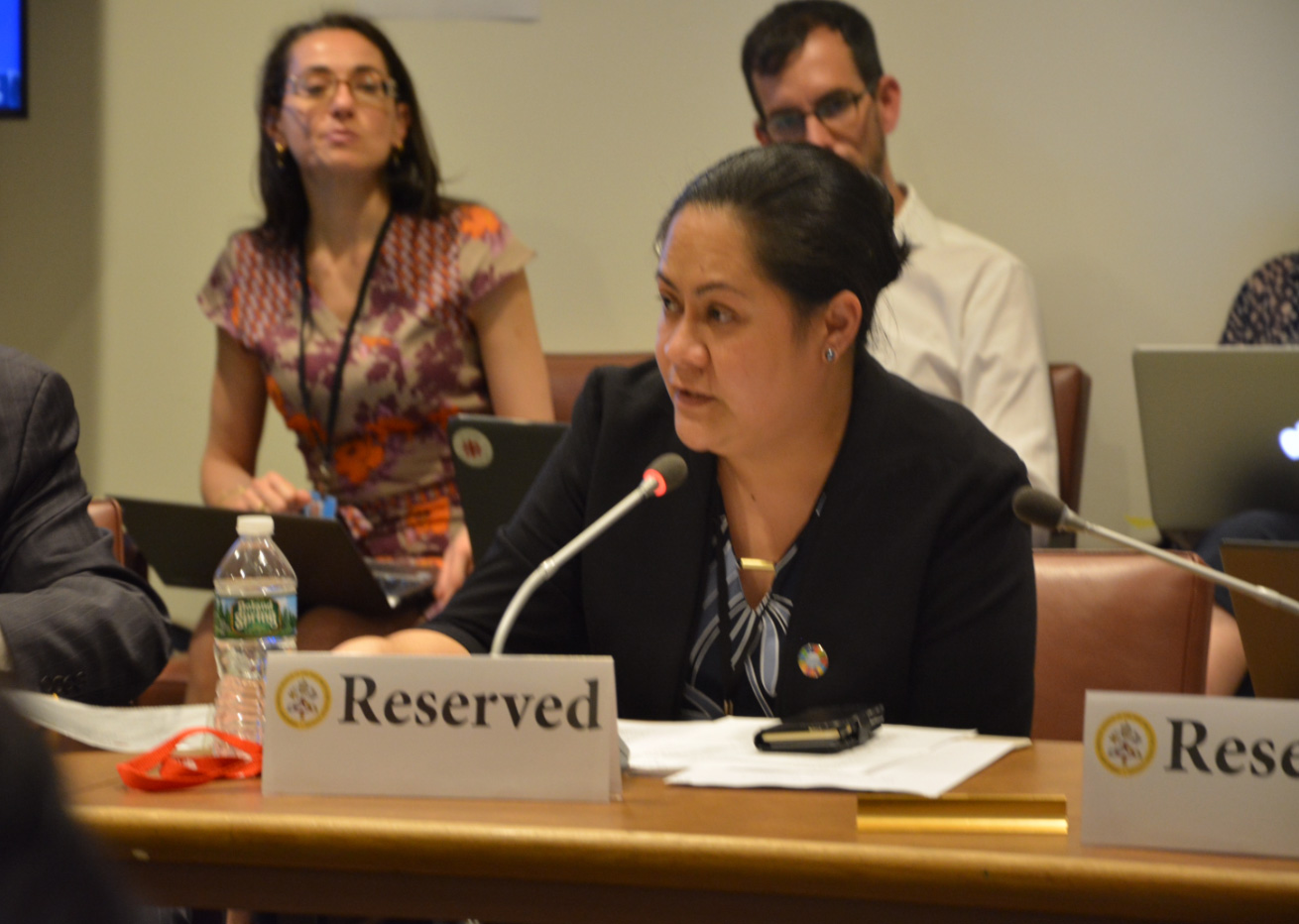