Our website is being upgraded and may show errors while we work. Please check back in a few hours.
Week of August 14, 2017 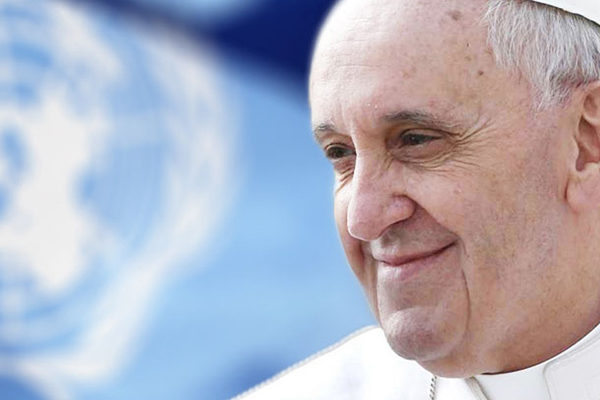 One of the summer projects at the Holy See Mission Office has been to set up the possibility for people to support the Mission financially through giving online. Several supporters have approached the Mission in recent months saying they would like to give by credit card, but there was no set-up to do so. Similarly for events like the annual Path to Peace Gala Dinner, credit card payments would need to be accepted over the phone, rather than giving attendees to pay on-line at their convenience.

Now that’s changed. The Path to Peace Foundation, which supports the Mission, has arranged with Our Sunday Visitor, which has one of the largest online giving programs for Catholic parishes in the United States, to allow similar, secure giving for the Mission through the Path to Peace Foundation. Donors are able to give one-time gifts, to set up recurrent donations, or even to pledge a gift over time. Donations can be given with all major credit cards as well as through bank transfers. The portal can be accessed here.

“Several benefactors for the Mission have asked for something like this to be set up so that they can support the Mission more conveniently than by remembering to send in checks or by other means,” said Fr. Roger Landry, director of special events for the Mission. “We were very happy to try to oblige, but just needed until things quieted down a little during the summer in order to prioritize it.”

Fr. Landry said that he chose Our Sunday Visitor both because of its track record in great customer service to Catholic parishes but also in gratitude for OSV’s support of technological improvements at the Mission since 2015, like website overhall, the weekly newsletter, and much more.

The online giving portal allows for giving to various causes through the Mission, like for the Christians in Syria as described by Cardinal Mario Zenari in his 2017 Path to Peace Gala Dinner Address or for the victims of violence against women and girls in Uganda, as Sr. Mary Angel Acayo described at the same dinner.

“This new possibility will make it much easier for donors as well as for the Staff of the Mission when it comes time for big events like the 2018 Path to Peace Gala Dinner,” Fr. Landry said. “Now people will be able to pay directly online and get all the rewards and miles that the credit card companies for spending.”

The mission of the Foundation is to disseminate information and documentation on statements and initiatives of the Holy Father, the Holy See and Catholic organizations directed toward building a world of justice, charity and peace; to initiate programs, such as conferences, seminars and lectures, to study the social teachings of the Church; to promote cultural initiatives touching on the Christian heritage in art, music and the humanities; and to foster religious and humanitarian projects with a view to promoting fundamental human rights by calling attention to specific emergency needs that arise in different parts of the world.

Funds raised by the Path to Peace Foundation over the last few years have allowed the Holy See Mission to sponsor 30 different conferences at the United Nations in the last year and a half, including on stopping mass atrocities and violations of human rights and religious freedom against Christians and other minorities in the Middle East; ending human trafficking and other forms of modern slavery by 2030; the centenary of Fatima and the enduring relevance of its message of peace; Raphael’s art and Christian humanism; and more. Everything from paying for rooms, live and on-demand webcasts, UN security fees, to speaker travel and accommodations, is picked up by the generosity of people to the Path to Peace Foundation, and these conferences allow the Mission to shine the light of Catholic Social teaching on current issues far more than very short official interventions permit.

Funds raised have also allowed us to underwrite the United Nations Prayer Service the Mission holds for the United Nations Community each September at the Church of the Holy Family, replace the 25 year old phone system in the Mission office with one more apt for communication needs today, underwrite many aspects of our vibrant internship program, increase the permanent staff of the Mission, make repairs to the Residence of the Holy See prior to Pope Francis’ arrival, and give grants to humanitarian projects in Haiti, Uganda and the Democratic Republic of the Congo. The generosity to the Path to Peace Foundation, at the Gala and directly, allows all of this work to continue and grow.

Those who would like to contribute to the work of the Mission may do so here.

Annual Prayer Service on the Occasion of the Opening of the 72nd Session of the United Nations General Assembly
September 11, 2017 | 6 p.m.
Church of the Holy Family | 315 East 47th Street, New York