Our website is being upgraded and may show errors while we work. Please check back in a few hours.
Week of September 4, 2017

Archbishop Bernardito Auza will lead the Prayer Service. Bishop John O. Barres of Rockville Centre will give the Meditation. His Excellency Antonio Guterres, Secretary General of the United Nations, and His Excellency Miroslav Lajcak, President of the 72nd Session of the General Assembly, will give short reflections.

There will be prayers, hymns and intercessions for peace in the world, for victims of war and terrorism, for care of our common home, for the care of the poor, for a solution to the ongoing refugee and migration crisis and other needs.

The annual prayer service began in 1987 and is attended by senior UN personnel, ambassadors from many of the Member States, interreligious and ecumenical leaders, delegates and NGOs and more.

Please find below a Poster of the Event. Those interested in attending are asked to inscribe at: holyseemission.org/rsvp2017prayerservice 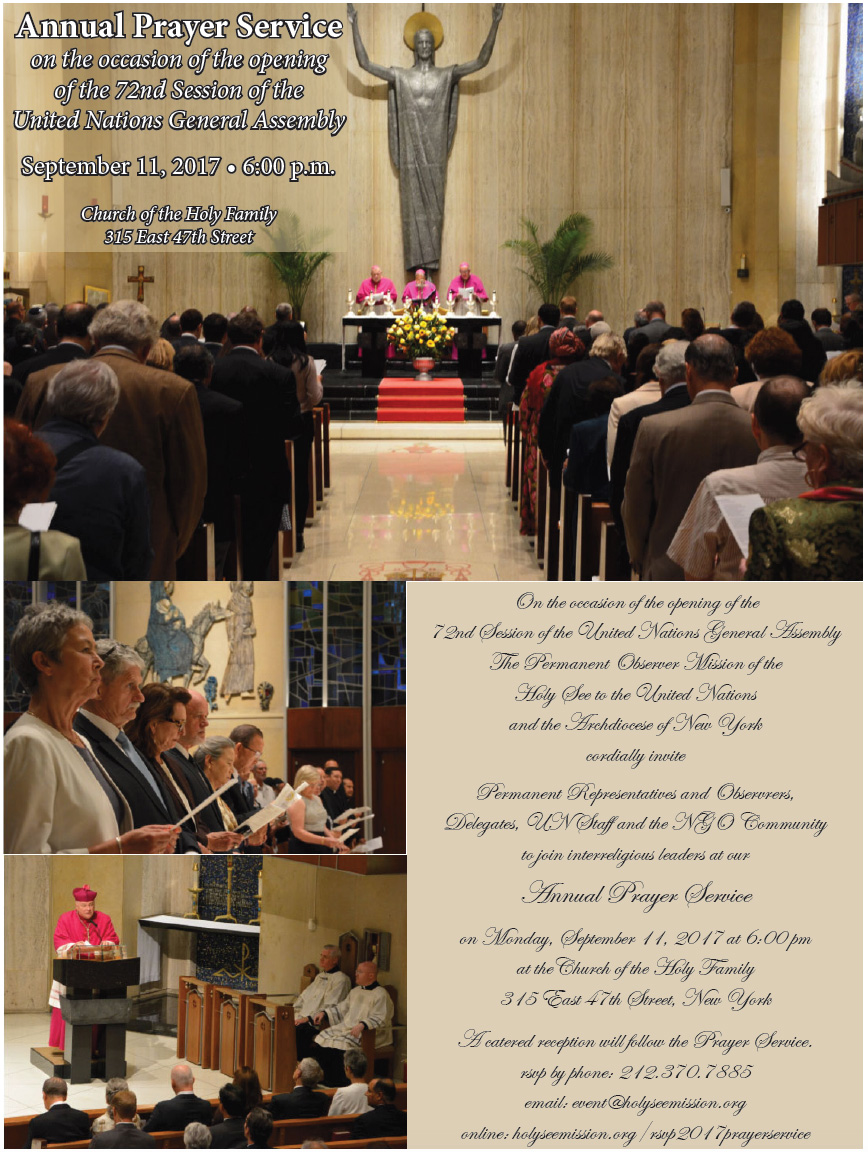 This week the Holy See Mission delivered four statements at the UN.

High-Level Forum on a Culture of Peace

On September 7, the Permanent Observer Mission of the Holy See to the United Nations delivered a statement at the High-Level Forum on a Culture of Peace during a panel discussion dedicated to the theme of early childhood development.

In its statement, the Holy See said building a culture of peace requires fighting injustice and tackling the root causes that lead to war and violence. It is crucial to build a culture of peace among children through educating them in a "culture of encounter," so that, through dialogue, they can learn authentic respect, esteem, listening and solidarity, and become enabled to respond to the many forms of violence, poverty, exploitation and discrimination. The Holy See also called for greater efforts toward disarmament and toward the non-proliferation of weapons, which it said aggravate situations of conflict and undermine development and lasting peace.

The Responsibility to Protect and
Accountability for Prevention

On September 6, Archbishop Bernardito Auza, the Permanent Observer of the Holy See to the United Nations delivered an intervention at the Informal Interactive Dialogue on the Report of the Secretary-General on the Responsibility to Protect and on accountability for prevention.

In his statement, Archbishop Auza said that while the Responsibility to Protect was only defined by the international community at the 2005 World Summit, the United Nations was basically born with and from the idea: while it is the primary responsibility of States is to protect their populations, when they fail or are incapable, it is the international community's responsibility to protect populations exposed to genocide, war crimes, ethnic cleansing and crimes against humanity. He noted that the United Nations Member States have the collective responsibility to protect populations from these atrocities through "timely and decisive action" through the Security Council and in accordance with the UN charter when diplomatic and other peaceful measures fail to do so. He also highlighted the importance of implementing the Right to Protect in the context of refugees and migrants, who are often displaced from their homes and countries due to violence, threats and actual atrocity crimes in their countries of origin.

On September 6, Archbishop Bernardito Auza, Permanent Observer of the Holy See to the United Nations, delivered an intervention at the Plenary Debate of the High-Level Meeting of the General Assembly on the Effective Implementation of the New Urban Agenda and the positioning of UN-Habitat, addressing the recommendations contained in the report of the Independent Panel to Assess and Enhance Effectiveness of UN-Habitat.

In his statement, Archbishop Auza emphasized the importance of building and nurturing sustainable, inclusive, safe and peaceful cities that are centered on the human person and provide a healthy environment for all inhabitants. Archbishop Auza highlighted Recommendation 10 of the Independent Panel's report, which warns against positioning cities in opposition to rural areas and making them compete for scarce development resources, something that often leaves those in rural areas at a disadvantage. He also emphasized the challenges urbanization poses for families, especially those of modest means, and called for their rights to be respected, noting the family is primary cell of all social development, including urban development.

On September 8, the Holy See delivered a statement upon the adoption of a resolution entitled "Strengthening and Promoting Effective Measures and International Cooperation on Organ Donation and Transplantation to Prevent and Combat Trafficking in Persons for the Purpose of Organ Removal and Trafficking in Human Organs."

Statement of the Permanent Observer Mission
of the Holy See to the United Nations
after the adoption of A/Zt/L.8o
"Strengthening and Promoting Effective Measures and International Cooperation on Organ Donation and Transplantation to Prevent and Combat Trafficking in Persons for the Purpose of Organ Removal and Trafficking in Human Organs"
New York, September 8, 2017

I would like to express my Delegation’s sincere gratitude to the Permanent Missions of Spain and Guatemala, as well as to the entire membership, for the successful negotiation and adoption of this resolution.

My Delegation hopes that this resolution would make Member States consider consolidating further effective and invaluable national, regional, and international initiatives and instruments to provide medical and ethical guidelines for the donation and transplantation of organs, as well as combatting their being trafficked.

Organ donation and transplantation are a testament to human progress and good will, and to the amazing progress of medical science. We must ensure that the practice remain safe, transparent and voluntary. In this regard, my Delegation welcomes all commitments to address the many economic and social inequalities that lead people to provide or sell their organs involuntarily. The Holy See condemns, in the strongest terms, the criminal networks that prey on the vulnerable and profit from their exploitation, in particular in the trafficking in persons and in involuntary removal and trafficking of organs.

On Monday, September 25, the Holy See Mission will co-sponsor an event entitled "Implementing The Plan of Action for Religious Leaders and Actors to Prevent Incitement to Violence that Could Lead to Atrocity Crime, together with the UN Office on Genocide Prevention and the Responsibility to Protect, the UN Inter-Agency Task Force on Religion and Development and the Global Centre for the Responsibility to Protect.

Please note that UN staff and those without UN passes will require special event tickets, which will be distributed before the event (details will be sent at a later date). In order to obtain a ticket you must RSVP by Wednesday, 20 September. UN Member States with valid UN passes will not require special tickets but are required to register for the event.

Implementing "The Plan of Action for Religious Leaders and Actors to Prevent Incitement to Violence that Could Lead to Atrocity Crimes"
Monday, September 25, 2017 | 3-5 p.m.
Conference Room 11, United Nations Headquarters