Our website is being upgraded and may show errors while we work. Please check back in a few hours.
Week of September 11, 2017 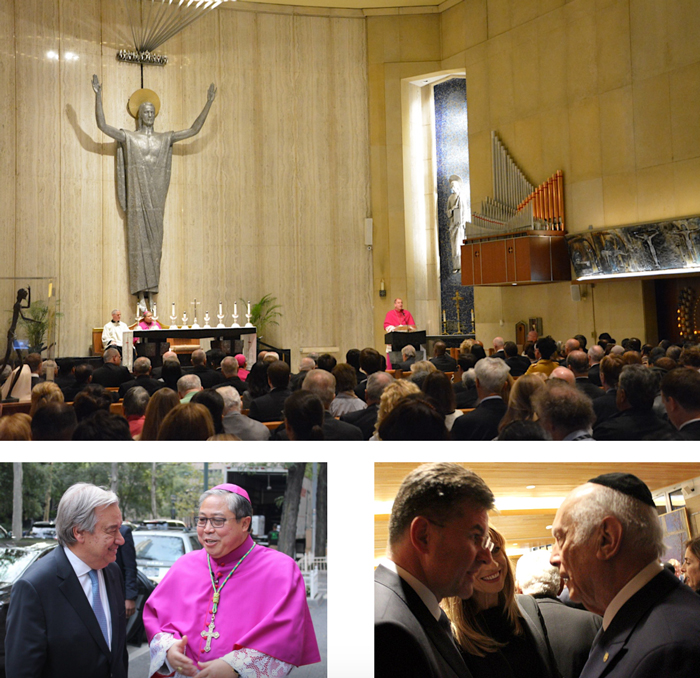 On the eve of the start of a new General Assembly Session and 16th anniversary of 9/11, top UN Leaders joined Religious leaders to pray for peace for people around the world.

For the past 31 years, the UN diplomatic community has joined religious and ecumenical leaders for an annual Prayer Service on the eve of the opening of the General Assembly, hosted by the Permanent Observer Mission of the Holy See to the United Nations and the Archdiocese of New York. This year, the prayer service fell on September 11th, so special prayers were offered to commemorate the 16th anniversary of the attacks on the World Trade Center, in addition to prayers for peace in the world and a fruitful 72nd session of the General Assembly.

In his meditation, Bishop John Barres of Rockville Centre, expressed sorrow for the lives lost in the attack on the World Trade Center, noting the New York Times series that put faces to the names of those who died in the tragedy.

“Those who died on 9/11 still matter, still inspire us and are, mysteriously, still with us,” Bishop Barres said. “Each one of us here, the tens of thousands associated in the mission of peace of the United Nations, find in the 9/11 heroes’ ongoing witness a calling to expand our souls and our global vision of peace and justice in the world, and to commit ourselves anew to the sacrifices necessary to make that vision a reality.”

To fulfill this vision, he said, all who work for peace and justice must, likewise, see the human face of those who suffer around the world.

“The inherent ethical law inscribed in our humanity bears witness to human dignity and is the foundation for all human rights,” Bishop Barres said, drawing from the words of Pope Francis in his 2015 address to the General Assembly.

He asked the religious and international community leaders to take human dignity into account in all aspects their work, especially when seeking solutions for safe and regular migration and combating human trafficking.

“When human life is not recognized as inviolable, all barriers fall,” Bishop Barres said. “The tragic deaths of migrants fleeing war and conflict sadly become mere statistics that are easily forgotten and eventually consigned to the back rows of dusty archives.”

Secretary General António Guterres attended the Prayer Service for the first time as Secretary General of the United Nations. Guterres also expressed sorrow and solidarity in light of the tragic attacks of 9/11, which he said was not only an assault on New York and the United States, but impacted the entire world.

Guterres called attendees to emulate the example of those who, through compassion, are moved to serve others.

“Every day, in every country, innumerable acts of kindness and compassion are easing the lives of migrants, refugees, the victims of disasters, the poor and the powerless,” Guterres said. “These are the stories we must honor and draw inspiration from.”

He also emphasized the importance of linking solidarity and diversity.

“We may follow many faiths, but we all share a common ethical foundation – to treat humanity with humanity,” he said. “This is the message loudly conveyed by so many inspiring religious leaders.”

His Excellency Miroslav Lajčák dedicated his year as President of the 72nd Session of the General Assembly to the theme of “Focusing on People: Striving for Peace and a Decent Life for All,” and, in his remarks, noted the important role faith-based communities play in embodying this theme.

“The UN is about people. Faith communities work for people every day.” Lajčák said. “They of course lend spiritual support and counsel. In many places of the world, however, they also provide essential, and even life-saving, services to people in need.”

Lajčák also said religious organizations play a key role in helping the UN fulfill its work of service to those most in need.

“Faith communities are - and must continue to be - a valuable partner to the UN,” Lajčák said. “I’ve heard stories of missionaries and religious leaders giving invaluable advice and help to UN colleagues in the field.”

Father Gerald Murray, the Pastor of the Church of the Holy Family where the prayer service took place, in his invocation drew upon the words of Pope Francis’ recent visit to Colombia in which he called for reconciliation and healing.

“Now is the time to heal wounds, to build bridges, to overcome differences,” Fr. Murray said. “It is time to defuse hatred, to renounce vengeance, and to open yourselves to a coexistence founded on justice, truth, and the creation of a genuine culture of fraternal encounter.”

To read the full remarks of each speaker, click here. 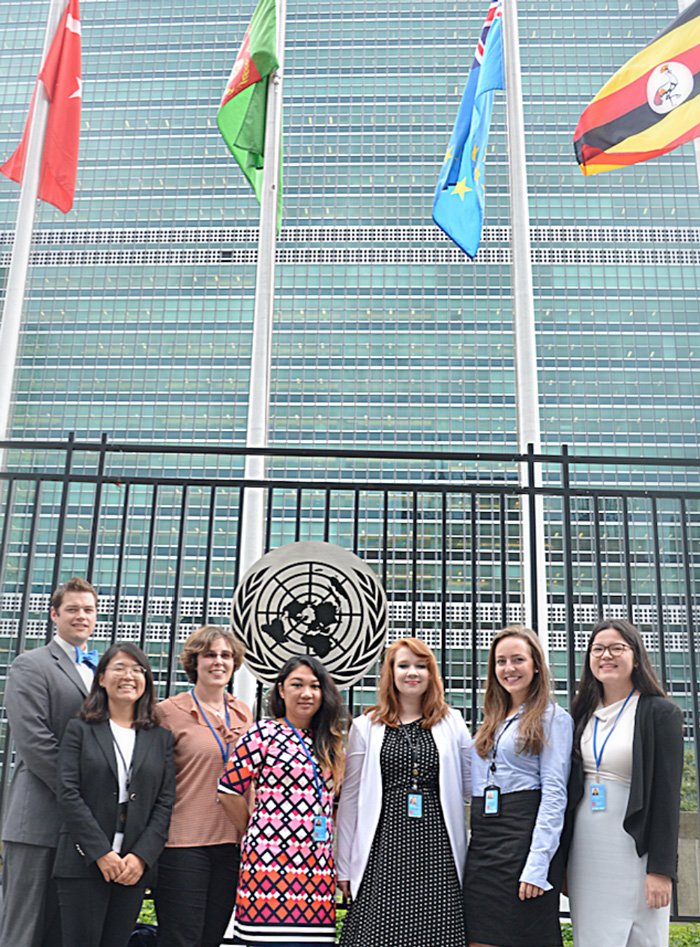 Fall 2017 Holy See Interns from left to right: Christopher Jay, Nalisha Mena, Michelle Rioux, Camille Mascarinas, Catherine Doolan, Rebecca Rethwisch , and Kirsten Rischert-Garcia.
The internship program at the Permanent Observer Mission of the Holy See to the United Nations in New York provides the opportunity for bright young Catholic college graduates or graduate students to gain invaluable experience assisting the work of the Holy See in its multilateral work at the UN, seeking to bring the light of Catholic Social Teaching to the debates of the international community. Interns receive a special orientation on the history of the diplomatic work of the Holy See at the United Nations, attend the wide variety of UN meetings, conferences and debates, file reports to be sent to the Secretariat of State in the Vatican, assist in running the Mission’s many conferences, regularly attend receptions and cultural events held by the Holy See and other Missions, and many other activities.

A new session for interns began on September 5. The seven new interns will play a vital role for the Mission during the the 72nd Session of the GA, especially during the upcoming General Debate. They come from New Hampshire, Kansas, Minnesota, New Jersey, New York, the Philippines and China.

The Mission has also strengthened the application and interview process and begun to advertise the opportunity more widely. The result has been a “deluge of excellent applications, which makes our work of selecting seven much harder,” but the results are paying off. “The young people are very impressive and are proving themselves to real contributors to our work at the United Nations,” Fr. Landry added.

The Mission is currently accepting applications for the Spring 2018 term, which will extend from January through June 2018. The deadline for applications is October 1. Fr. Landry encourages those who know Catholic university students and graduate students whom they think would profit from the experience to let them know about the possibility. Information about the program and details about applying are found by clicking here.

Insights from Present and Past Interns

“Working as an intern for the Holy See Mission, I was exposed to the enormity of the problem of human trafficking in countries all over the world. What I learned about the victims and their stories touched my heart.  As a Catholic attorney, I would like to work on changing and passing laws that will protect and defend these victims of human trafficking. I truly believe what Pope Francis said: ‘Human trafficking is an open wound on the body of contemporary society, a scourge upon the body of Christ.  It is a crime against humanity.’”
Lauren Holcombe, Spring 2017

"My most memorable experience was having the honor of being present at the United Nations during the UNGA's 70th year anniversary. Pope Francis' opening remarks -- calling for the international community to come together for the sustainable development goals -- was an example of how the Roman Catholic Church, how our faith, is an inspiration and a force for good in the international public sphere!"
AR Lopez, Fall 2015

"I was drawn to this internship because it incorporates my interests in international diplomacy and peace-building in light of Catholic Social Teaching. Having the opportunity to be surrounded by experts in so many fields and important topics at the United Nations is also a unique learning opportunity."
Kirsten Rischert-Garcia, Fall 2017

“I decided to apply for the Saint John Paul II Fellowship of the Seton Hall School of Diplomacy because I wanted to experience diplomacy first-hand as opposed to simply learning about it in a classroom setting.  Pope Francis’ diplomacy truly builds peace and serves the less fortunate and the Catholic Church has practiced diplomatic relations for almost two thousand years.”
Catherine Doolan, Summer and Fall 2017

"After interning at the Mission and reporting on the meetings of the Second Committee (Economic and Financial Committee), I realized how passionate I was about economic development. After finishing my term at the Mission I moved to South Carolina to do grassroots work in the wake of Hurricane Joaquin."
Miranda Baldwin, Fall 2015

“Being able to work in the UN building and witness first-hand the site where so many important decisions take place is a memorable and exciting experience every day.”
Camille Mascarinas, Fall 2017 - Spring 2018

"As a Catholic law student, I considered it crucial to educate myself on the needs and experiences of the whole human family, in the interest of developing an authentic sense of solidarity and learn from those who are handling the broadest possible range of human needs, despite religious, cultural, or political differences."
Michelle Rioux, Fall 2017

“My most memorable experience at the UN has been sitting in on the commencement of the General Assembly, and watching the UN enter a new annual cycle."
Christopher Jay, Fall 2017

“Among the great experiences I’ve had so far has definitely been meeting a hero of mine, Jane Goodall, and having a conversation with her about Pope Francis and the Church's care for the environment."
Rebecca Rethwisch, Fall 2017

“The working day is a community-- the simple lunch is a chance to eat together, to know each other and to have a conversation. It is a chance to look into myself by encountering my colleagues.”
Nalisha Men, Fall 2017 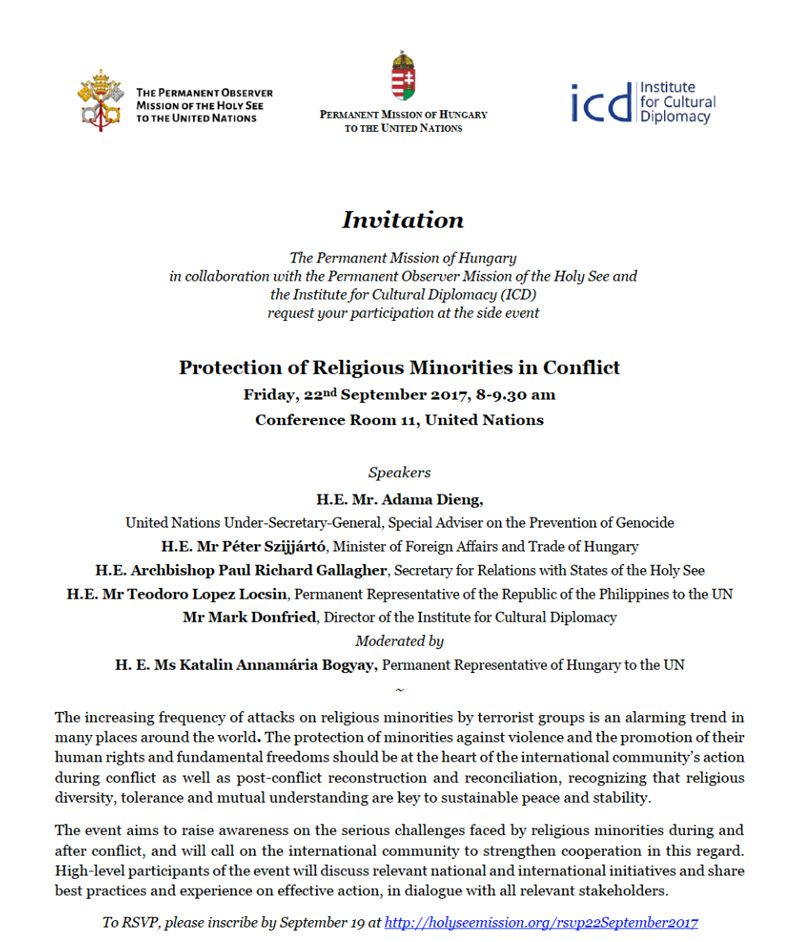 Implementing "The Plan of Action for Religious Leaders and Actors to Prevent Incitement to Violence that Could Lead to Atrocity Crimes"
Friday, September 22, 2017 | 8-9:30 a.m.
Conference Room 11, United Nations Headquarters
RSVP by September 19 at holyseemission.org/rsvp22September2017 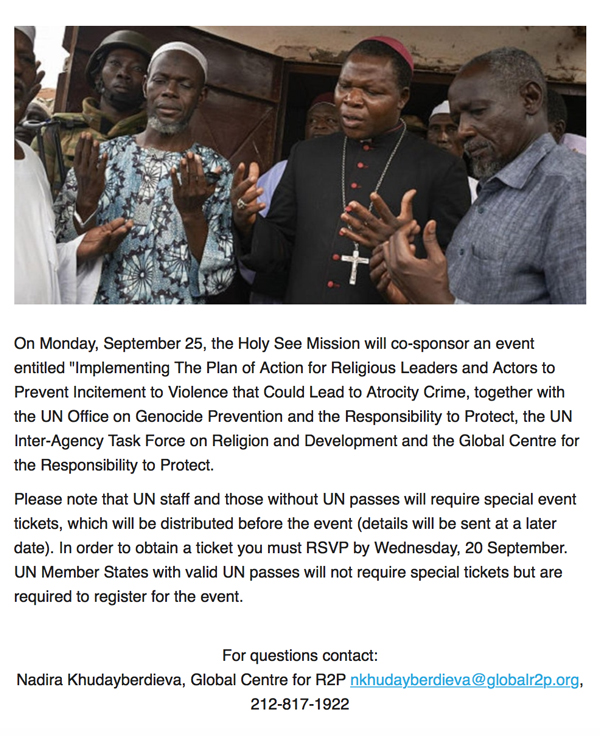 Implementing "The Plan of Action for Religious Leaders and Actors to Prevent Incitement to Violence that Could Lead to Atrocity Crimes"
Monday, September 25, 2017 | 3-5 p.m.
Conference Room 11, United Nations Headquarters