Our website is being upgraded and may show errors while we work. Please check back in a few hours.
Week of September 25, 2017 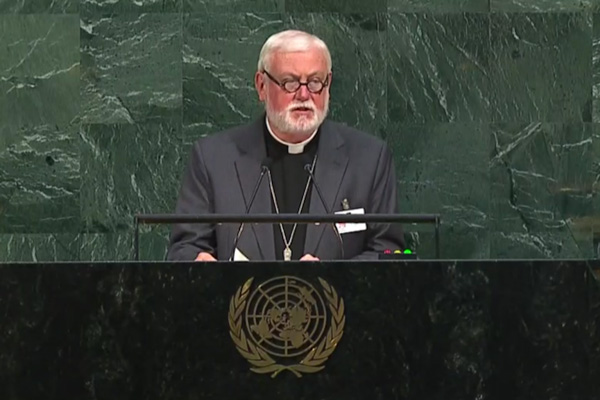 On September 25, Archbishop Paul Richard Gallagher, the Holy See’s Secretary for Relations with States and Head of Delegation to the General Debate of the 72nd Session of the General Assembly of the United Nations, gave the intervention of the Holy See to the United Nations General Assembly on the theme of the 72nd Session, “Focusing on People: Striving for Peace and a Decent Life on a Sustainable Planet."

In his address, Archbishop Gallagher applauded the focus on people, especially those on the margins, something that means not just guarding them from heinous crimes but placing their good ahead of national and geopolitical interests; it also means protecting their human dignity, their right to life, freedom of religion, food, water, housing, work and to a safe environment. Our commitments must go beyond words, he said, as he focused on the commitments necessary in the protection of our common home, in the fight against poverty and to promote sustainable development, in the prevention of war and violent conflicts according to the Responsibility to Protect, in fostering the care of refugees and the safe, orderly and regular treatment of migrants, in eradicating human trafficking and all forms of human slavery, and in battling against the legal and illegal arms trade. He commented on the situation in Yemen, Syria, Venezuela, the Middle East, Democratic Republic of the Congo, Ukraine, South Sudan and the Central African Republic. He also spoke about the significance of the Holy See’s signing of the Treaty on the Prohibition of Nuclear Weapons last week.

In his statement, Archbishop Gallagher said that since the adoption of the Global Plan of Action in 2010, the problem of human trafficking has worsened, but the resources to combat the problem have also grown. He appraised the Global Plan of Action by means of its “four Ps”: preventing trafficking, protecting victims, prosecuting traffickers, and promoting partnerships to fight trafficking. On prevention, he praised greater educational campaigns and the focus on eliminating the demand for the exploitation of others, but called for a frank and courageous examination of practices like pornography and prostitution that drive such demand. On the protection and assistance of victims, he praised the recognition that victims are not perpetrators of crime but called for greater awareness of the long-term investment needed to rehabilitate survivors. On prosecution, he lauded advances in adequate legal instruments, but said that traffickers still work with too much impunity. On partnerships, he praised the Santa Marta Group and Talitha Kum as models and mentioned Pope Francis’ call for a mobilization and solidarity commensurate to the dimensions of the trafficking scourge.

Protection of and Assistance to Trafficking Victims, especially Women and Children
Trusteeship Chamber

On September 27, Archbishop Paul Richard Gallagher, the Holy See’s Secretary for Relations with States and Head of Delegation to the General Debate of the 72nd Session of the General Assembly of the United Nations, gave a statement during Interactive Panel Discussion 2 of the High-level Meeting of the General Assembly on the appraisal of the United Nations Global Plan of Action to Combat Trafficking in Persons. The Panel Discussion was dedicated to addressing the theme of “The Global Plan of Action and effective partnerships for the protection of and assistance to victims, including through the United Nations Voluntary Trust Fund for Victims of Trafficking in Persons, Especially Women and Children, also taking into consideration the implementation of the Sustainable Development Goals”

On September 26, Archbishop Bernardito Auza, Permanent Observer of the Holy See to the UN, gave an intervention during the High-level plenary meeting to commemorate and promote The International Day for the Total Elimination of Nuclear Weapons.

In his statement, Archbishop Auza said that the Holy See signed and ratified the Treaty of the Prohibition of Nuclear Weapons last week (Sept 20) because the Treaty is a sign of hope that one day the world will be free from nuclear weapons and therefore more peaceful and stable. It is a significant step toward complete nuclear non-proliferation and disarmament. He mentioned Pope Francis’ tweet this morning to “commit ourselves to a world without nuclear weapons” and said that nuclear disarmament can be more effectively realized if it is accompanied by equally determined efforts toward general and complete disarmament. He lamented the slow pace of the progress of the entry into force of the Comprehensive Nuclear Test Ban Treaty and encouraged States to ratify it. Finally, he urged governments to consider reallocating a sizable portion of their savings from disarmament to development.

On September 25, Archbishop Paul Richard Gallagher, the Holy See’s Secretary for Relations with States and Head of Delegation to the General Debate of the 72nd Session of the General Assembly of the United Nations, gave a speech at Fordham University on the perspective of the Holy See on contemporary international issues.

In his address, Archbishop Gallagher said that the Holy See’s approach to international affairs is different from other States and international organizations, because the Holy See views international life through the lens of its spiritual mission to prioritize the equal dignity of all human beings, the transcendent dimension of the person, and the common good of humanity, including peace, religious freedom and integral development. He focused at length on the Holy See’s priority and work for peace and on the courage it takes to be peacemakers. The four principles of prudent action, given by Pope Francis in his 2013 exhortation Evangelii Gaudium, he said, are helpful for the building of a fraternal, just and peaceful society. He added a fifth: the human person is greater than the nation and the person flourishes only through love and community. Respect for the person, he said, is the criterion and goal of law and political action. He underlined that respect for human life and dignity must be the starting point for political, juridical and economic discussions and that a nationalism that places national security over all else leads to disorder. A true nationalism, he stated, must charitable toward the whole family of men. He raised the issue of a global authority — not a world super-state — that could have the ability to regulate and resolve global problems. He said that this idea has not fully been acted upon because systems for enforcing common rules and guidelines have not proven successful, although some international organizations and treaties have  partially achieved this system of accountability. The Holy See continues to encourage this.

Role of Religious Leaders and the Responsibility to Protect 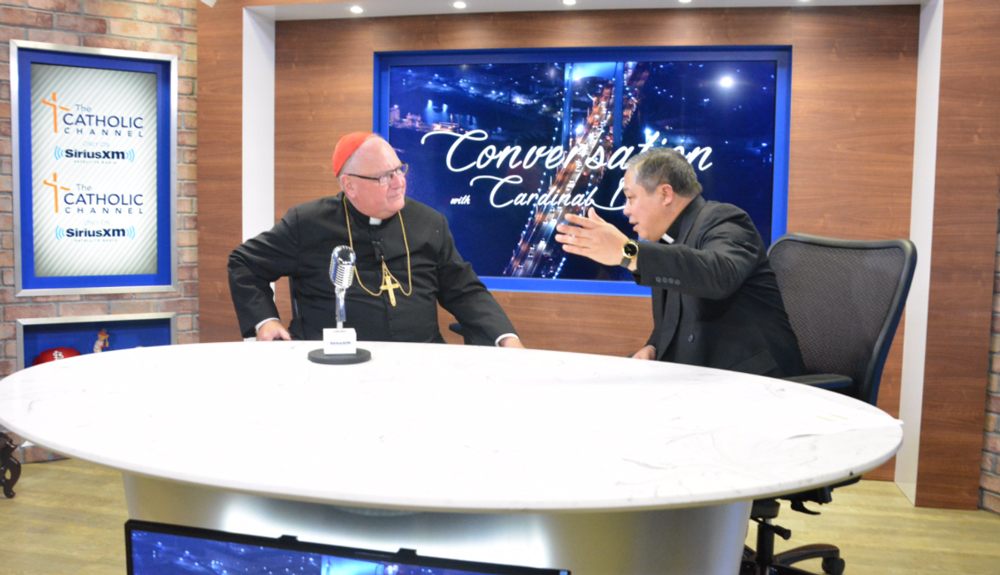 On September 26, Archbishop Auza spoke was a guest on Cardinal Dolan's radio show entitled "Conversations with Dolan." On the show, the two discussed the Holy See Mission's history and present role at the UN, as well as the mission the Diplomatic Corps of the Holy See fulfills around the world. 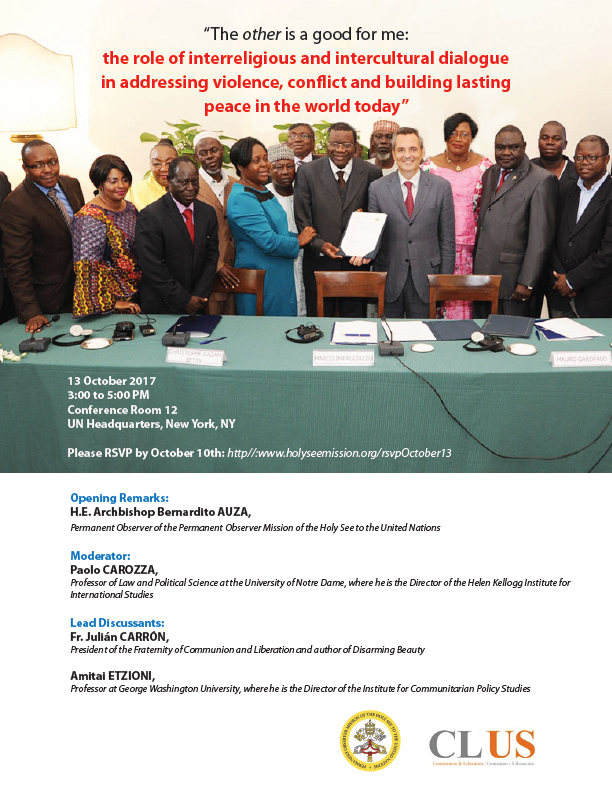 The Other is a Good for Me: The Role of Interreligious and Intercultural Dialogue in Addressing Violence, Conflict and Building Lasting Peace in the World Today
Friday, October 13 | 3-5 p.m.
Conference Room 12, United Nations Headquarters