Our website is being upgraded and may show errors while we work. Please check back in a few hours.
Week of October 16, 2017

Pope Francis and the Pursuit of Peace in Colombia 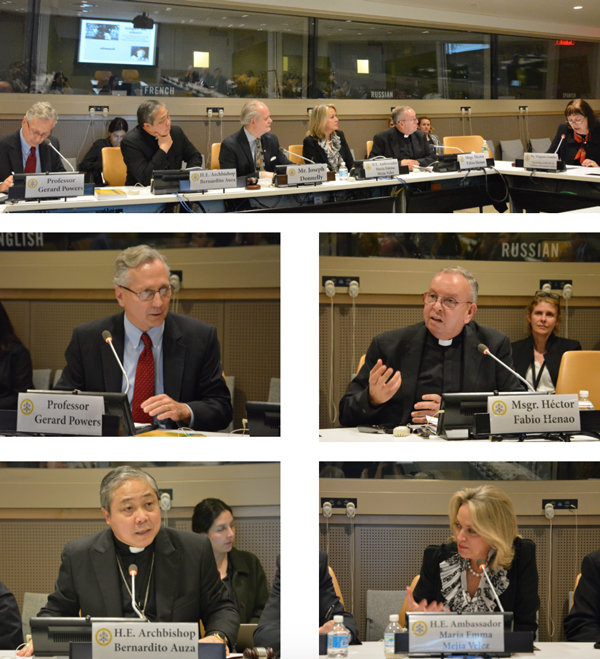 On October 20, the Permanent Observer Mission of the Holy See to the UN sponsored a side-event entitled “Reconciliation and Peace in Colombia: The Impact of the Visit of Pope Francis,” together with the Permanent Mission of Colombia to the UN, Caritas Internationalis, the Catholic Peacebuilding Network, the Krok Institute for International Peace Studies and Grace Initiative.

The event highlighted the message Pope Francis brought to the country when he visited in early September: that all parties must take the first step in reconciliation to heal the wounds of the country’s 52-year conflict, which ended with the signing of the Final Peace Accord between the Colombia Government and Fuerzas Armadas Revolucionarias de Colombia (FARC) in November 2016. The event also featured the role of both the international community and Catholic organizations in working towards peace in Colombia.

Archbishop Bernardito Auza, Permanent Observer of the Holy See to the UN, said the Pope’s motto for his pastoral visit —  “Demos el primer paso,” Spanish for “Let’s take the first step” — was chosen to inspire all Colombians to take responsibility for making the first move towards forgiving each another, in hopes of mending the society, which has been fragmented by generations of violence and distrust.

“To take the first step, with determination, involves these five elements: courage, forgiveness, reconciliation, truth and justice, and encounter,” Archbishop Auza said, summarizing the message of the Pope’s six-day visit to the country. “Rather than waiting for others to make the first move, he called everyone to ‘go out to meet; others, bringing them an embrace of peace, free of all violence.”

The Holy Father was seeking to accompany Colombians on not just the first step but the entire journey towards peace, since the Church has a particular duty and desire to build peace and reconciliation in the war-torn country, he said.

Ambassador María Emma Mejía Velez, Permanent Representative of Colombia to the UN, said Pope Francis touched her nation by taking many opportunities to meet with victims who have suffered great loss during the conflict.

“Conflict not only damages people, but damages the culture and society,” she said. “This was the most important achievement of his visit. He understands that society was divided” and he was urging Colombians to replace that division with "forgiveness, humility and love.”

Joseph Cornelius Donnelly, who serves as Head of Delegation of Caritas Internationalis and moderated the event, said that the pursuit of peace in Colombia is an urgent and ongoing matter and encouraged attendees to remain engaged in Colombia’s peace process, which he said can serve as a model for peacebuilding throughout the world, most especially in Latin America. He elaborated on the notion of “accompaniment,” defining it as “attaching to the process” which, heeding the spirit of Pope Francis, Caritas and other Catholic organizations strive to do.

“We want to attach ourselves to the peace process and the people it is for,” he said.

Msgr. Héctor Fabio Henao, Director of Caritas Colombiana and of the National Secretariat of Pastoral and Social Outreach for the Episcopal Conference of Colombia, said that to fully implement the peace accord, Colombians must be engaged in reconciliation at local levels.

“The Holy Father said, 'I have come to cry with you.' I think that is the position of the church,” he said. “It is to walk with the victims; not just to say nice words and give money, but to walk with them towards peace and reconciliation.”

Msgr. Henao also stressed the importance of combatting the coca crop industry to enable peace in the country. He said this must be done by giving local communities opportunities for dignified work.

Professor Gerard Powers, Coordinator of the Catholic Peacebuilding Network and Director of Catholic Peacebuilding Studies for the Kroc Institute for International Peace Studies at the University of Notre Dame, spoke of the Peace Accords Matrix, the world’s largest data base on peace agreements, which tracks implementation of 34 comprehensive agreements since 1989.  According to the Matrix's metric system, Colombia is ahead on implementation at the 9-month mark, compared to other peace processes.

“For too long, Colombia has been a poster child for intractable conflicts. But it is also a School of Peace,” Professor Powers said. “Colombia is perhaps the world’s best example of Catholic peacebuilding.”

He said the Colombia Peace Accord will be a difficult and complex process that will require long-term commitment by many actors, both in Colombia and around the world.

“The role the Pope is playing in supporting the peace processes and in imploring Colombians to reconcile is only possible because of the fertile peacebuilding ground prepared by decades of work by the Catholic community, with multiple actors addressing the complex of issues at all levels,” he said.

Virginia Gamba, Special representative of the UN Secretary General for Children and Armed Conflict, said that primacy of childrens’ rights was a guiding principle in negotiations toward the Peace Accord, and hopes it will serve as an example for similar peacebuilding situations.

“Peace is both a need and aspiration,” she said, highlighting the need for peace for children’s welfare. “Peace sets the stage to provide a safe and secure place for other common agendas.”

Archbishop Auza's full remarks can be found here.
To watch the event in its entirety, click here. 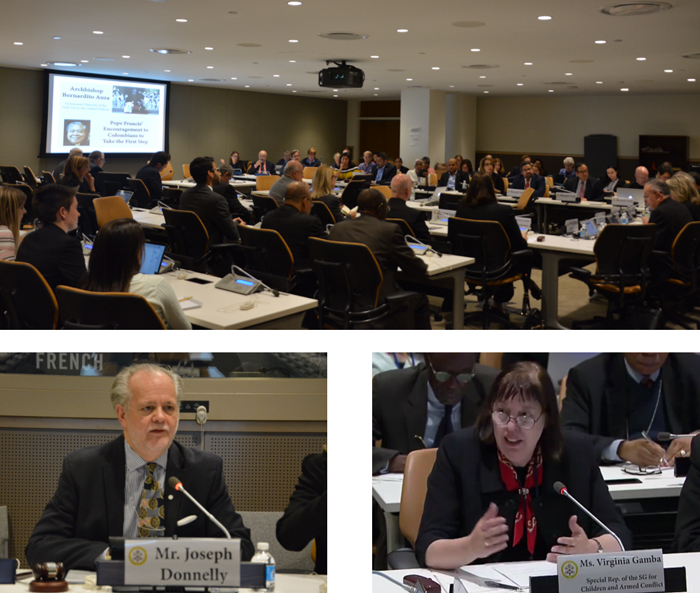 This week the Holy See Mission delivered 5 statements at the UN.

On October 16, Archbishop Bernardito Auza, Permanent Observer of the Holy See to the United Nations, gave an intervention during the Second Committee debate on Agenda Item 25, dedicated to “Agricultural Development, Food Security and Nutrition.”

In his statement, Archbishop Auza said that recent news revealing the number of hungry people has increased sharply in the last year to 108 million and that the world is not on track to eradicate hunger and nutrition by 2030, as the international community committed itself to achieve in Sustainable Development Goal 2, is severely disappointing. What is needed, he said, quoting Pope Francis, is practical solidarity to ensure the right of every person to be free of poverty and hunger. Hunger and malnutrition flow not only from local, natural and structural problems, but also widespread indifference and selfishness. Therefore, there is a need not only for technological expertise to increase agricultural productivity and better food security, but for the increased human expertise of solidarity and compassion.

The Situation in the Middle East, including the Palestinian Question
Security Council

On October 18, Archbishop Bernardito Auza, Permanent Observer of the Holy See to the United Nations, gave an intervention during the Security Council Open Debate dedicated to “The Situation in the Middle East, including the Palestinian Question.”

In his intervention, Archbishop Auza said that the Palestinian Question remains prominent among the problems facing the Middle East, and that the Holy See firmly believes that the only option for peaceful coexistence is to have two independent States. He urged both the Israeli and Palestinian authorities to refrain from any and all provocative actions and show a determined will to engage in sincere negotiations. He reaffirmed that free and unhindered access to the Holy Places in Jerusalem should be guaranteed. He also spoke of the situation in Yemen and Syria, appealed for greater funding to help refugees in Jordan, Lebanon, Iraq, Turkey and Egypt, and said equality before the law based on the principle of citizenship regardless of one’s race, ethnic origin or religion is fundamental to keeping peace in the region and beyond.

Prevention of an Arms Race in Outer Space
First Committee

On October 17, Archbishop Bernardito Auza, Permanent Observer of the Holy See to the United Nations, gave an intervention during the First Committee debate on Agenda Item 97, dedicated to the "Prevention of an Arms Race in Outer Space."

In his statement, Archbishop Auza called the international community to safeguard the peaceful nature of outer space, preventing it from becoming an area for militarization and weaponization, noting that this year marks the fiftieth anniversary of the Outer Space Treaty, which aims to prevent conflicts on Earth from extending to outer space.  He highlighted the important role that the peaceful development of space technologies has had for humanity, noting that satellites are important not only for the daily life of people throughout the world, but are also used to monitor the environment and humanitarian operations, and gather evidence of possible genocide and other mass atrocities. Because the world is increasingly dependent on space technologies, it is left increasingly vulnerable to attacks against space technology; a war in space could potentially be more devastating to civilizations than armed conflict on the ground.

On October 17, Archbishop Bernardito Auza, Permanent Observer of the Holy See to the United Nations, gave an intervention during the Fourth Committee debate on Agenda Item 52, dedicated to “International Cooperation in the Peaceful Uses of Outer Space."
In his statement, Archbishop Auza emphasized that outer space is a common heritage of humanity and is destined for the common good. He noted that as space activities increase, outer space pollution has also escalated.  A crisis of the environment on earth or in space means a crisis for humanity, he said, highlighting the symbiotic relationship between the environment and its inhabitants. He called for urgent action to be taken by the international community to combat the increasing problem of space pollution, encouraging the establishment of treaties, guidelines, and agencies that adequately enable and safeguard sustainable and peaceful uses of outer space.

On October 16, Archbishop Bernardito Auza, Permanent Observer of the Holy See to the United Nations, gave an intervention during the First Committee debate on Agenda Item 99, dedicated to “General and Complete Disarmament.”

In his intervention, Archbishop Auza said that, despite progress on international treaties and conventions, the hopeful signs of progress during the last half century toward nuclear disarmament and general and complete disarmament have been dimmed. Old nuclear powers are racing to modernize their nuclear arsenals and others are seeking to become nuclear powers. There has been an utter disregard for international humanitarian law in various conflicts as weapons proscribed by international treaties are being used against innocent civilians. Weapons of mass destruction are being sold or gifted to other States involved in conflicts. There is, in short, a chasm between commitments and actions. He applauded the work of the First Committee, which focuses on disarmament, and the UN Office of Disarmament Affairs for the progress they have achieved and recommended that future deliberations on general and complete disarmament include institutions that specialize in peacekeeping, peacebuilding and peacemaking.

On Tuesday, Nov. 21, at 11 am, at the Garden City Hotel on Long Island, Archbishop Auza will receive the Telecare Award of Excellence. Tickets for the reception and lunch are $250 each.  Those interested in attending may contact Angelica Ayrosos at aayroso@TelecareTV.org. 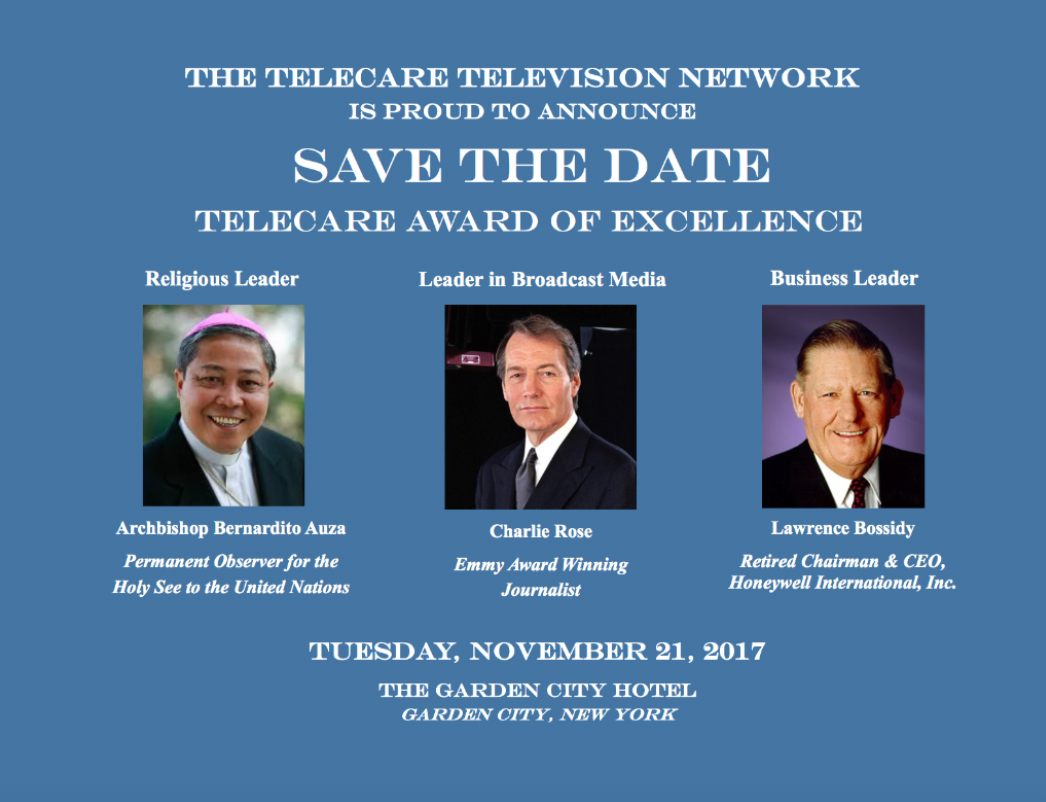