Our website is being upgraded and may show errors while we work. Please check back in a few hours.
Week of November 13, 2017

This week the Permanent Observer Mission of the Holy See to the United Nations gave no statements, but participated in multiple negotiations for resolutions at the General Assembly and for the Second and Third Committees of the UN. 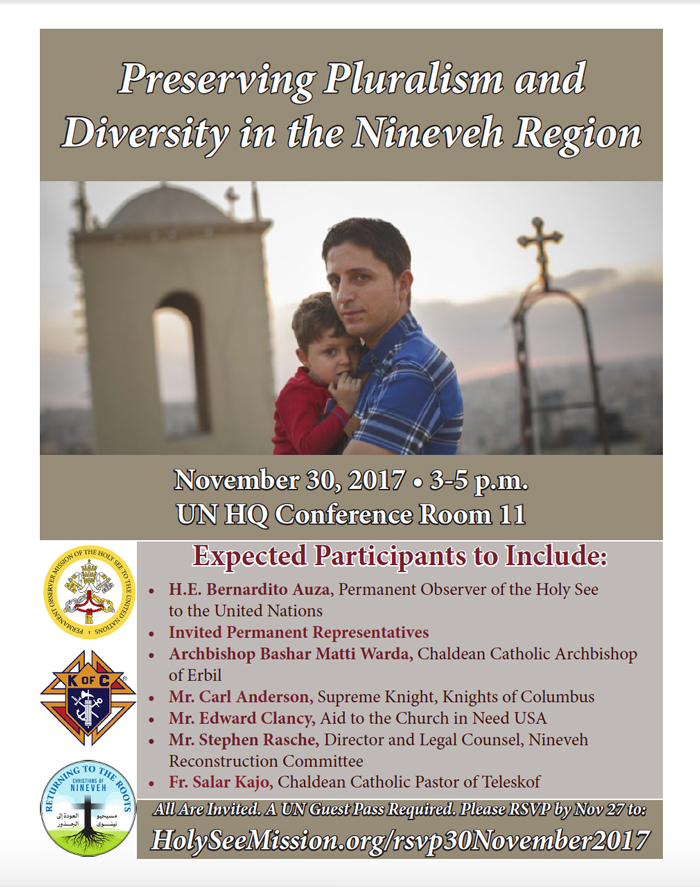 Preserving Pluralism and Diversity
in the Nineveh Region

The Permanent Observer Mission of the Holy See to the United Nations, the Knights of Columbus and the Nineveh Reconstruction Committee (NRC) are organizing an event focusing on preserving pluralism and diversity in the Nineveh Region of Iraq. Crucial to pluralism and diversity is the capacity for religious and ethnic minorities to return to their ancestral communities after having been driven from the area by Da’esh. The Iraqi Parliament is presently working on a draft resolution to protect diversity in Iraq and secure the rights of all groups of Iraqi society (called components in the 2005 Iraqi Constitution), enabling all violated components to come home by creating the conditions for their return such as rehabilitation, reintegration and recovery programs for survivors, as well as rebuilding and capacity building of devastated areas. Several national governments have taken responsibility for helping to rebuild destroyed cities and towns. Civil Society organizations, like Aid to the Church in Need and the Knights of Columbus, have done likewise. The NRC is an association of the Christian Churches of the Nineveh Plain — the Syriac Orthodox Church, the Syriac Catholic Church and the Chaldean Catholic Church — to coordinate efforts to facilitate the return of their respective peoples home, to coordinate with relevant authorities at the local, gubernatorial, regional and national levels, and to allow aid organizations, foreign governments, intergovernmental and other international entities throughout the world to deal with one organization rather than several.

All those interested in attending are asked to register at holyseemission.org/rsvp30November2017.

Those without UN passes can indicate their need for a special events pass to be picked up 45 minutes before the event. Those with UN badges are asked to register so that the Permanent Observer Mission of the Holy See can ensure that all participants have seats in the room.

For questions and further information:

If you have any questions or seek further information about the event, please contact
Fr. Roger Landry (rlandry@holyseemission.org; 212.370.7885 x127).

Due to heightened UN security, please be sure to register by the November 27 deadline, providing the name that exactly corresponds to your state-issued ID. More information regarding each event will be provided shortly.