Our website is being upgraded and may show errors while we work. Please check back in a few hours.
September 14, 2018

Holy See Makes Waves in
Law of the Sea Conference 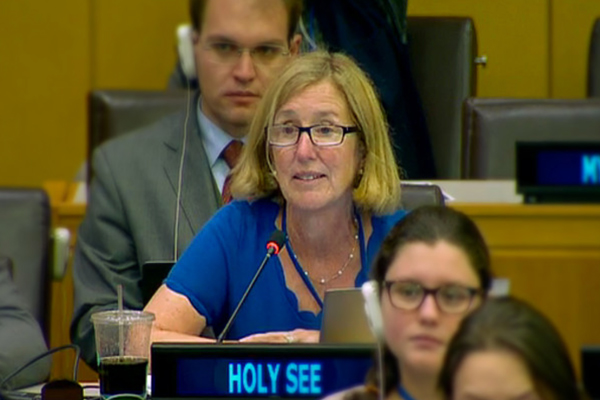 Since September 4, the Holy See has contributed to the dialogue on the care for  our common home at the UN during the negotiations for an international legally binding instrument under the UN Convention on the Law of the Sea on the conservation and sustainable use of marine biological diversity in areas beyond national jurisdiction, also known as BBNJ.

In the two week duration of the intergovernmental conference, the Holy See has delivered 10 statements to help come to an international agreement that protects world's oceans while also allowing for prudent use of the ocean for its rich resources, particularly the research leading to discoveries that promote human flourishing in a way that benefits people from all around the globe.

Susan Whelan, pictured above, has served the Holy See Mission as a legal expert following the UN Convention on the Law of the Sea and her expertise has contributed to the active role the Holy See has been able to play in recent the intergovernmental conference.

Holy See Mission in the News
Interns bring 'zeal' for faith, policy to
job of serving Holy See at U.N. 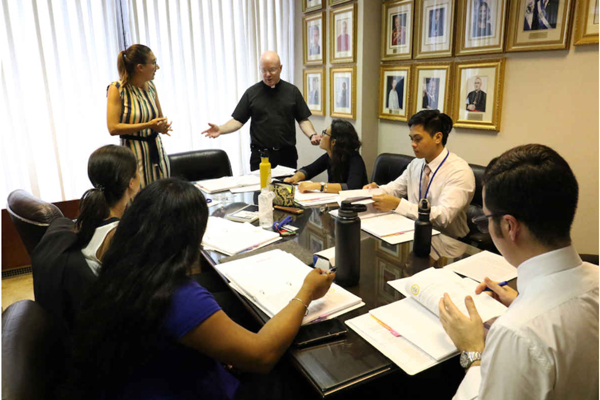 The daily schedule at the United Nations is jammed with substantial debates and conferences about issues of interest to the universal church.

Amazingly, the Vatican's leanly staffed Permanent Observer Mission to the United Nations is represented at most of them, thanks to a "force-multiplier" cadre of interns and fellows.

Each year, 18 to 20 young Catholics from around the world are selected to participate in an intensive program that immerses them in the Holy See's multilateral work at the U.N. During their three-to-six-month service, participants attend U.N. meetings, file comprehensive reports for the Holy See, staff conferences run by the mission, and go to receptions and cultural events sponsored by various U.N. missions.

The Vatican has been a neutral, nonvoting member of the world body since 1964. It participates in the debate of the General Assembly, makes interventions, co-sponsors draft resolutions that make reference to the Holy See and is a party to international agreements.

Father Roger Landry, an attache at the mission and director of the intern program, said interns and fellows are valuable adjuncts to the permanent staff that includes Archbishop Bernardito Auza, who is the Holy See's permanent observer, as well as two diplomats and four attaches.

"Their zeal and youth keep all the staff members enthusiastic for the work, even on challenging days," Father Landry told Catholic News Service. Their presence at meetings and research on issues "have impacted in a very powerful way the work we've done at the U.N.," he said.

The universal church also benefits from training bright, committed young Catholics who will use their new learning to help strengthen both church and society in their home countries, he said.

Interns have served at the mission for many years, but since the program was formalized and re-established in 2016, the number of applicants and their qualifications has increased significantly, Father Landry said.

Most of the people who apply for one of three annual sessions are graduate students and one-third already hold an advanced degree. Interns are unpaid, but fellows receive a stipend from their universities.

"They want to integrate their academic life with their life of faith. Their zeal for the types of things we are doing precedes them here," he said of the applicants.

Father Landry described the successful candidates as faithful Catholics who know Catholic social teaching and see it as part of what the Vatican has to offer the international community. They are self-starting, high-level thinkers who can understand complex, nuanced issues and write clearly, he said.

"We also want them to be able to work efficiently and cheerfully and not be overwhelmed by the amount of work, but integrate into it the joy of the Gospel," he told Catholic News Service.

"They bring some sunshine to the work we do. We call them teammates and members of the family and they become some of our greatest advertisers and recruiters," Father Landry said.

Since 2016, there have been more than 50 interns and fellows from 14 countries on six continents. During the first week of September, seven new participants completed a three-day training program at the mission and "hit the ground running," according to Father Landry. 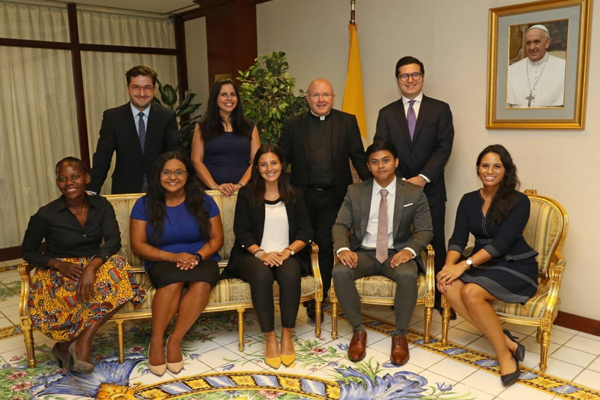 Giulia Iop, 23, an intern from Udine, Italy, has an undergraduate degree from Sciences Po in Paris, and a master's degree in comparative politics from the London School of Economics.

She said she applied for the program because "I wanted to see if spirituality, my own and others', can fit into politics and political strategies. I think it's something that's missing today and could be a great help in solving current issues."

Iop, who wrote her master's dissertation on extremist Buddhist organizations in Myanmar and Sri Lanka, said she hopes to see if spirituality is something that can become "entrenched in the political system."

Mary Goretti Byamugisha, 32, a doctoral candidate from Uganda, holds a master's degree in international law and human rights and another in political science and international politics. She has studied in Uganda, Costa Rica and the Sophia University Institute in Italy.

"The internship is a way to realize my dream to work in the U.N. setting," she said. She said the Holy See presence at the U.N. is "a platform to help the church hear the voice of the voiceless and an opportunity to sit in a position to raise issues."

Byamugisha plans to take her experiences back to Uganda to start an organization to educate about human rights and advocate for the return of Africans to Africa.

Maroon Malouf, 24, came to the program in June after completing a master's degree in international law as a Fulbright scholar at Fordham University. The Melkite Catholic from Nazareth, Israel, has a law degree from Haifa University. He said he grew up "hanging out in churches in Bethlehem" because his father has driven tour buses for pilgrims for 30 years.

During his fellowship, Malouf has covered Security Council meetings and those of the U.N. General Assembly Fourth Committee, the group responsible for decolonization issues. On his first day, he attended a session on the Israel-Palestine conflict.

"All the big players were there, and it was mind-blowing to see the ambassadors from both sides at the same table," he told CNS. "The U.N. provides a platform for everyone to discuss things in a civilized way, even if they don't agree."

Malouf said people look for the opinion of the Vatican, which he described as "a mediator and key player. Every delegation respects us. There is no resentfulness."

Malouf hopes to practice international law and diplomacy. "The field is fascinating because it has an impact on the world."

Giuseppe Beretta, 27, has a law degree from the Catholic University of the Sacred Heart in Milan, Italy. He has been drawn to the Vatican and St. Peter's Basilica in Rome since he was a child. "I felt the beauty of the universal church," he said.

He was baptized by Cardinal Loris Francesco Capovilla, longtime secretary to Pope John XXIII, and said the late prelate was "a father, guide and mentor to me since age 6. His death (in 2016 at age 100) was the first difficult important loss of someone close to me who helped me mature. I think often of his love for the church and his testimony."

Beretta began his fellowship in June and hopes to work in bilateral or multilateral diplomacy for Italy. He has focused on the Security Council and discussions on counterterrorism strategy and the protection of the human rights of the elderly. Watching the U.N. proceedings, Beretta said he is learning to think, listen, balance interests and help all parties reach a substantive consensus.

He said he wakes with enthusiasm every morning with the focus of serving Pope Francis and the Catholic Church to benefit humanity. He is trying to cultivate and use all of his talents.

Beretta said the interns and fellows are an engaged community of diverse people from different backgrounds.

"It's like living in a hierarchical family. It's an amazing group and you have to learn to work together," he said. 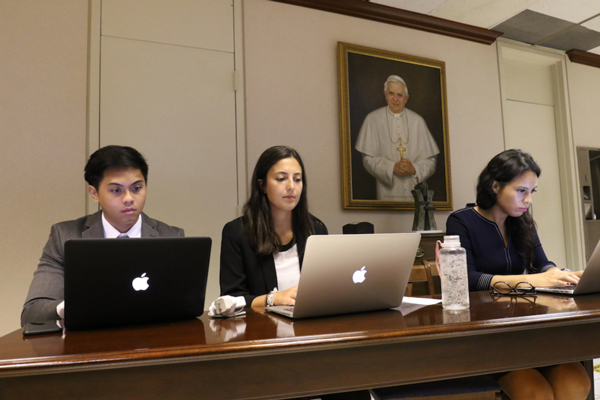 Juan Daray, Giulia Iop and Reyna Anderson, interns at the Vatican's Permanent Observer Mission to the United Nations, work on their laptops at the mission's headquarters in New York City Sept. 6. (CNS photo/Gregory A. Shemitz)