Our website is being upgraded and may show errors while we work. Please check back in a few hours.
November 16, 2018

On November 12, Archbishop Bernardito Auza, Permanent Observer of the Holy See to the UN, gave an intervention during the Fourth Committee deliberations of the Seventy-third Session of the United Nations General Assembly on Agenda Item 54, dedicated to the "United Nations Relief and Works Agency for Palestine Refugees in the Near East" (UNRWA).

In his remarks, Archbishop Auza commended the organization for providing essential support for approximately 5.6 million registered Palestine refugees in the Middle East, including housing, education, healthcare and employment. He said that a fully functional UNRWA is the best means to prevent the situation in the region from worsening, but he noted that UNRWA faces its largest budgetary deficit ever due to a shortage of funds. He  reiterated the Holy See's support for a two-State solution in the region and called for political and humanitarian support to defend and advance the rights of Palestine refugees

Pope Francis and the
Global Challenge of Migration 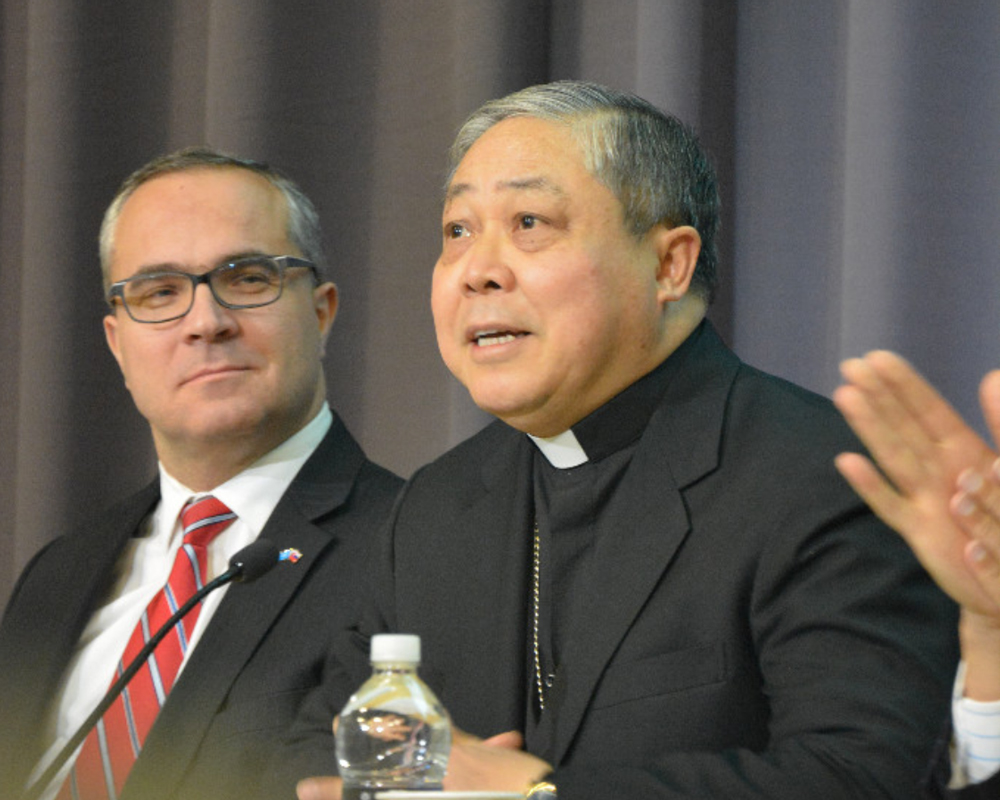 On November 14, Archbishop Bernardito Auza, Permanent Observer of the Holy See to the UN, gave a speech on “Pope Francis and the Global Challenge of Migration” at Yale University’s McMillan Center for International and Area Studies.

In his remarks, Archbishop Auza considered the global challenge of migration from the perspective of Pope Francis and the Holy See. He sketched the Biblical history of migration and then looked at 2017 UN statistics on the number of migrants and refugees across the world, considering the push and pull factors that drive people to leave their homelands. He emphasized that migration is a natural and human phenomenon, spoke to the importance of the right to remain as well as the right to migrate, and how the rights of migrants must be respected regardless of their migration status. He said that because migration is a global challenge it demands a global response of shared responsibility. He finished by focusing on Pope Francis’ “four verbs” that summarize the Church’s holistic approach: to welcome, protect, promote and integrate.

On November 16, Archbishop Bernardito Auza, Permanent Observer of the Holy See to the UN, gave an address at Manhattan College on “The Moral and Ethical Responsibilities of Universities in Response to the Global Realities of Migrants and Refugees.” It was the keynote address for the Conference on Global Initiatives in Refugee and Migrant Education sponsored by the Refugee and Migrant Education Network, Manhattan College, the Pontifical University of John Paul II in Krakow, the Center for Interreligious Understanding and the organization Being the Blessing.

In his address, Archbishop Auza developed the thoughts of Pope Francis in a 4 November 2017 speech to the International Federation of Catholic Universities in which the Holy Father emphasized that Catholic Universities have a particular responsibility to educate in order to serve and called on them to help alleviate the situation of migrants and refugees through research, education and social promotion.

On November 12, UN Ambassadors, Delegates and Staff joined poppy-clad musicians to commemorate the centenary of the end of World War I with concert at UN Headquarters in New York.

The UN Staff Recreation Council Symphony Orchestra and Choir, along with the chamber choir “Inspire" came together to perform Mozart’s Requiem in D Minor, as well as Samuel Barber’s Adagio for Strings and Mozart’s Ave Verum Corpus. The concert was sponsored by the Permanent Observer Mission of the Holy See to the UN, the Mountbatten Institute, the Permanent Observer Mission of the Sovereign Order of Malta to the UN, and the Priory in the USA of the Order of St. John.

In his opening remarks, Archbishop Auza, Permanent Observer of the Holy See to the UN, said that the solemn and moving musical selections for the concert were fitting to honor those who gave their life in the First World War.

“The works to be performed tonight are among the most moving ever written to help people pray with hope as they mourn,” Archbishop Auza said, noting that the texts of the Roman Catholic Requiem Mass would have been used at the funerals for millions of Catholic soldiers and civilians during and after the War.

Mozart’s Ave Verum Corpus, he said, has helped "countless people to find meaning in the tragic death of loved ones within the death of Jesus of Nazareth on the Cross.” and Barber’s Adagio is “perhaps the most famous funereal orchestral work of the twentieth century,” one that Barber himself used as a setting for the Agnus Dei, in which Christians pray for God to forgive their sins and grant us piece.

“The centenary of the Armistice signed on 11 November 1918 is an opportunity for us to work, hope and pray together that armistices may come to all regions where war and conflict now rage and that the blood shed by so many may inspire our commitment to build a culture of enduring peace,” he noted.

Archbishop Auza drew on the words of Pope Francis from Nov. 11, the actual 100th anniversary of the Armistice, when he urged those in attendance at his Angelus greeting in St. Peter’s Square, to pray for victims of World War I and to "invest in peace, not in war."

“Tonight’s concert marking the centenary of the end of World War I is a small investment in that culture of peace,” Archbishop Auza said. “Our work at the United Nations to prevent the scourge of war and promote and build peace is a fruit from the tree that grew out of the ashes of both World Wars.”

Paul Beresford-Hill, Director General of the Mountbattan Institute, said that not only were the musical selections appropriate for the solemn commemoration, but that the United Nations building itself was fitting, as the organization was begun to prevent the scourge of war.

“This place is not just a place for the business of discussion and argument," he said. “It is also a hallowed shrine to the greatest aspirations of humanity.”

Unfortunately, he said, the tragedies of the First World War recurred less than two decades later in World War II.

“It was not the 'war to end all war,' it was the war to end an era,” he said. “It was an unfinished requiem that did not herald resurrection until a new Europe was born from its ashes in 1945. The armistice we commemorate this weekend merely postponed yet again the blood-letting of political uncertainties and broken promises.”

Beresford-Hill implied that the lives lost as a result of World War I should fuel the modern world’s duty to prevent the loss of more lives due to the many violent conflicts the world currently faces.

The concert closed in a solemn sounding of a lone bugle playing the Last Post and a moment of silence for those who have given their lives.

Archbishop Auza's full remarks can be found here.
To watch the concert in its entirety, click here. 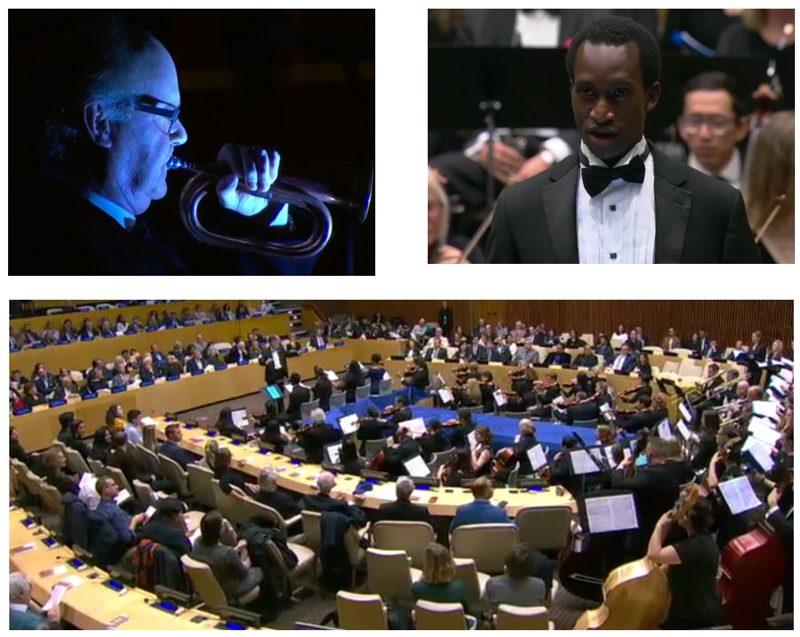 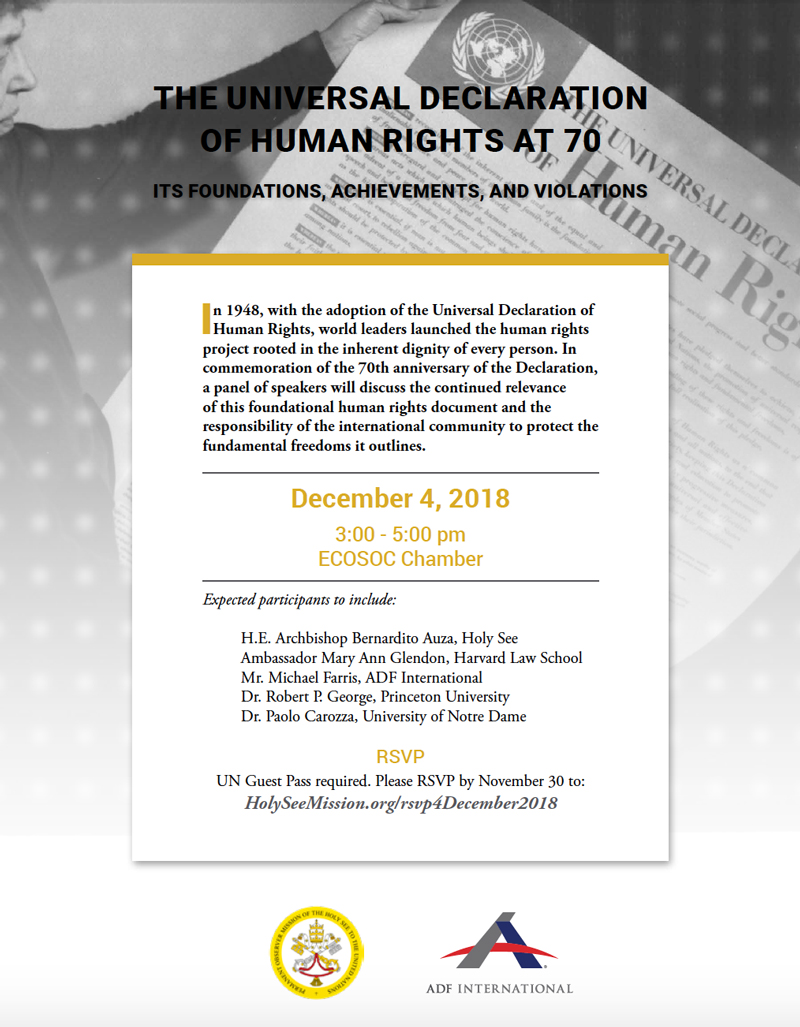 We will continue to bring you weekly updates from the Permanent Observer Mission of the Holy See to the United Nations. For more, we encourage you to follow us on Facebook, Twitter, and our website holyseemission.org, where you can find features like these infographics, made by our former intern, Aaron Salvan, who is now a seminarian. 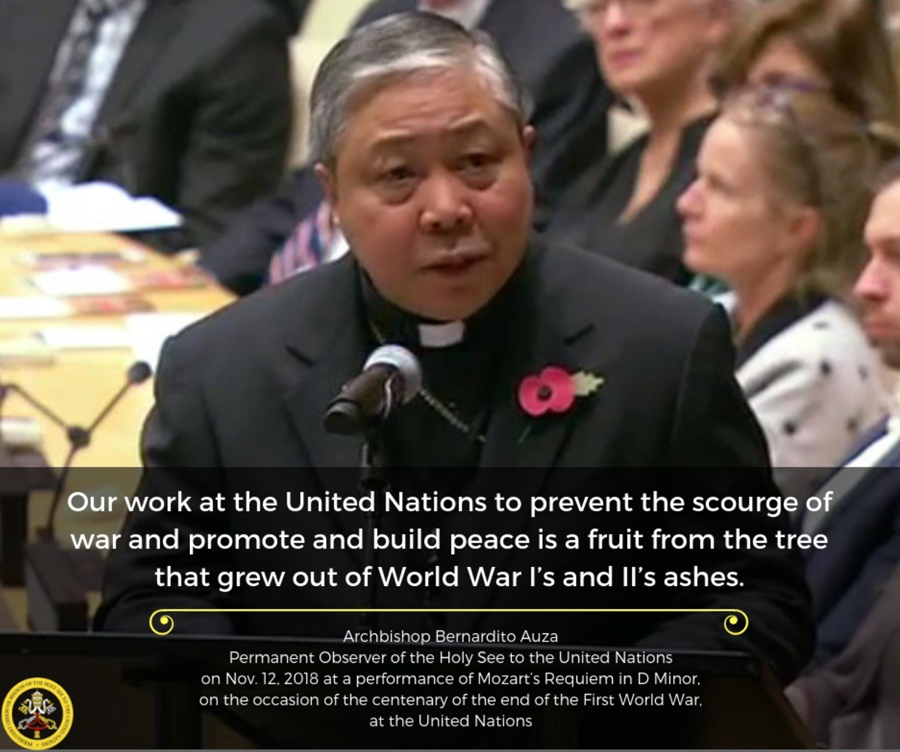 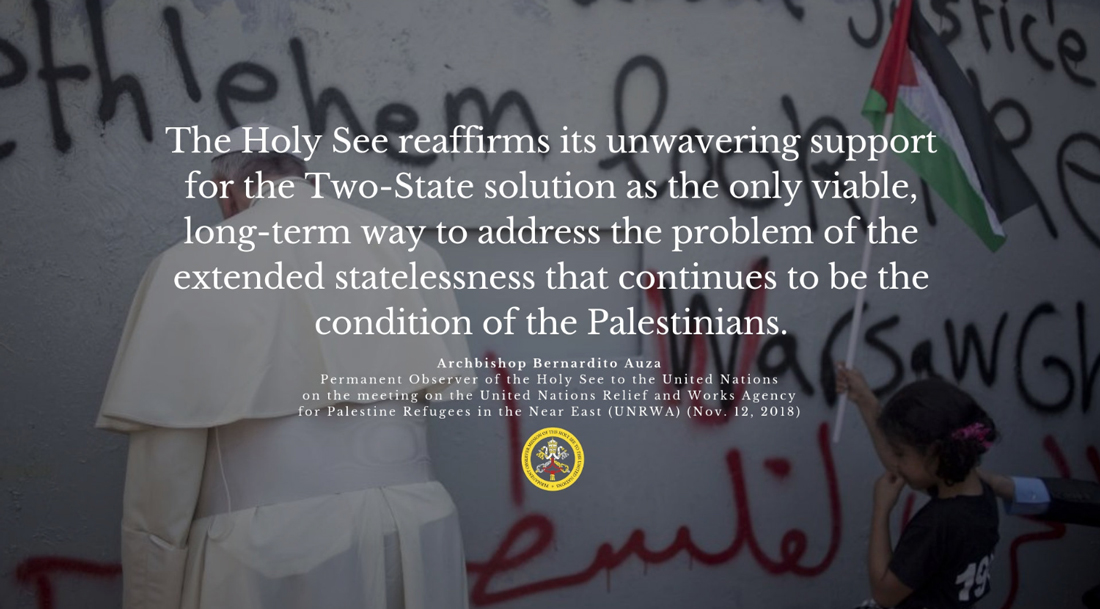