Our website is being upgraded and may show errors while we work. Please check back in a few hours.
March 1, 2019 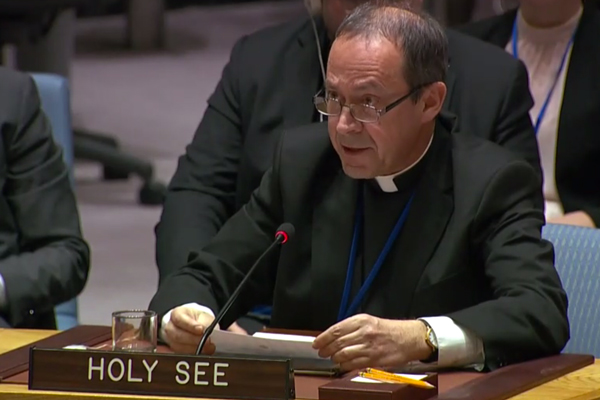 On February 27, Monsignor Antoine Camilleri, Under-Secretary for Relations with States of the Holy See, spoke on behalf of the Holy See at the Security Council Open Debate held at United Nations Headquarters in New York dedicated to “Cooperation between the UN and regional and sub-regional organizations on silencing the guns in Africa by 2020.”

In his statement, Monsignor Camilleri praised the Republic of Equatorial Guinea for convening on open debate on silencing the guns in Africa as well as lauded the determination of the African Union to make Africa conflict free. Signs of peace, he said, are seen in the historic agreement between Ethiopia and Eritrea to end their conflict and establish diplomatic relations and in the agreement among leaders in South Sudan to restore peaceful coexistence. He said that the continent continues to be plagued by fundamentalist violence in several areas and it is necessary to examine the root causes of recourse to instruments of death, including endemic social and economic disparities, political instability and corruption, the exploitation of natural resources and violations of human dignity. The international community, he said, must keep its commitment for development aid, humanitarian assistance in emergencies, and stable financial and technical support without being tied to ideological colonization. It must make sure that African children become proficient with pens and schoolbooks rather than guns and ammunition. He called upon the international community, and especially weapon-producing States, to control and limit the production and movement of weapons in Africa. 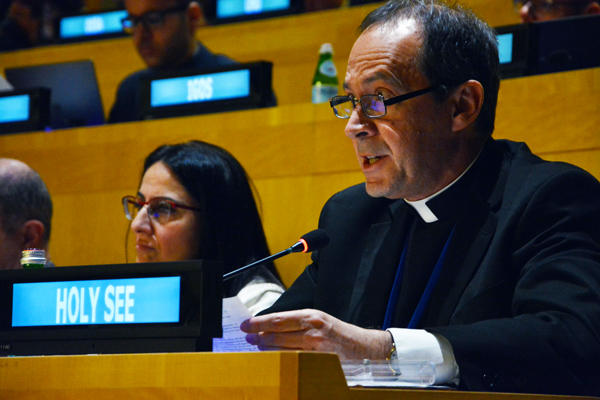 On February 27, Monsignor Antoine Camilleri, Under-Secretary for Relations with States of the Holy See, spoke at the High-Level Debate on International Migration taking place at United Nations Headquarters in New York during a panel dedicated to an “Overview on Progress in Achieving Migration Goals.”

In his remarks, Monsignor Camilleri said that the fact that migration is largely regular, the sign of a healthy economy and the bedrock of many modern nation States rarely makes the news. Migration, he said, certainly creates challenges but when well managed and the root causes of forced migration and internal displacement are addressed, it becomes voluntary and sustainable. The international community has committed itself to well-managed migration, he said, in the Global Compact for Safe, Orderly and Regular Migration (GCM) and in the 2030 Agenda for Sustainable Development. He noted that political and religious persecution, acts of violence and discrimination, extreme poverty, and environmental degradation are among the drivers of forced migration and the humanitarian emergencies, border insecurity and human trafficking that attend it. He called for concrete steps to promote integral human development and end poverty, ensure health, material and spiritual well-being, provide quality education, fight inequality and violence, ensure work, combat climate change and build more peaceful, inclusive, accountable and effective societies. The human dignity and rights of every migrant, regardless of status, must be respected, he said, something that requires concrete commitment, resources and coordination, in order to ensure proper welcome, promotion, protection and integration. The GCM, he said, like any living document, has room for improvement, but remains the most comprehensive set of best practices and policy instruments within the international system to ensure that international migration benefits all.

On February 28, Monsignor Antoine Camilleri, Under-Secretary for Relations with States of the Holy See, spoke at the High-Level Debate on International Migration taking place at United Nations Headquarters in New York during a panel dedicated to understanding youth migration and engaging youth as key partners in migration governance.

In his remarks, Monsignor Camilleri said the 2030 Agenda for Sustainable Development as well as the Global Compact for Migration and the Global Compact on Refugees commit the international community to providing youth quality education, decent work, health care and fundamental rights States are obligated to protect and fulfill. This commitment is particularly compelling with regard to migrant youth whom he said are often the first to be left behind. Young people move for greater security, higher education, family reunification and better opportunities, but the majority leave home involuntarily because of conflict and extreme poverty. Young girls, he noted, are at added risk to violence and abuse along the journey and are vulnerable to traffickers. Their vulnerabilities can be significantly reduced by national action plans that are needed in countries of origin to ensure the enjoyment of all human rights and fundamental freedoms and through the establishment of regular pathways for migration. He expressed hope that the creation of the International Migration Review Forum will improve global migration governance and provide solidarity to migrant youth.

Twenty-fifth Session of the Council of the
International Seabed Authority
Kingston, Jamaica

On February 25, Monsignor Tomasz Grysa, Head of the Delegation of the Holy See to the First Part of the 25th Session of the Council of the International Seabed Authority (ISA), gave the general statement of the Holy See at the Session taking place at the headquarters of the ISA in Kingston, Jamaica.

In his remarks, Monsignor Grysa congratulated the ISA on the progress it has recently made with regard to regulatory, financial, technical, social and environmental challenges and offered three observations with regard to the development of standards, guidelines and key concepts. First, he emphasized that guidelines and process standards are not legally binding and therefore should not occasion objection on the part of various delegations. Second, he recommended that the performance standards involve strengthening of the ISA’s Legal and Technical Commission, be modeled after the procedures and methods of the UN Commission on International Trade Law, and take advantage of experts from various Secretariats of the ISA. Third, he suggested that guidelines with regard to royalties should be made by the ISA Council instead of the ISA Secretary General. He also reiterated the Holy See’s recommendation that every action of the ISA should flow from a responsibilities based approach, rather than a rights based approach, which better serves to conserve the oceans and use its resources in a sustainable way for the benefit of all mankind. 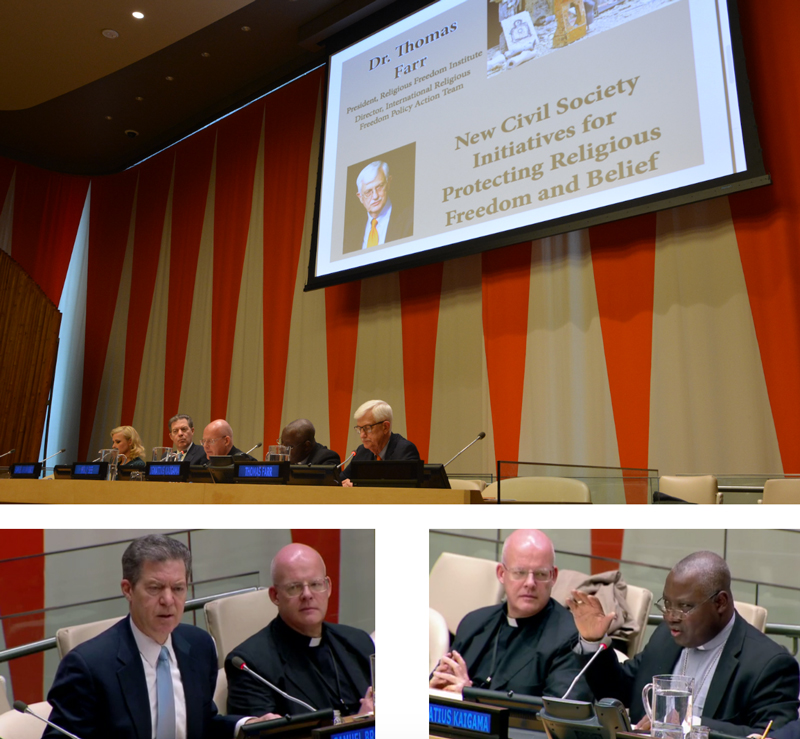 Defending and promoting religious freedom is one of the most pressing issues for the international community, according to experts at a Holy See event on March  1 in the Economic and Social Council Chamber at United Nations Headquarters.

The Permanent Observer Mission of the Holy See to the UN hosted a conference entitled “International Religious Freedom: A New Era for Advocacy in Response to a New Age of Challenges and Threats," together with the NGO Committee on Freedom of Religion or Belief.

Archbishop Bernardito Auza, Permanent Observer of the Holy See to the United Nations, in remarks delivered by Msgr. Tomasz Grysa, said that although the rights to freedom of thought, conscience and religion are protected under international law, there continue to be severe acts of intolerance, discrimination, persecution and even genocide against religious believers on account of the beliefs they hold.

“Because of the attacks the world has witnessed in recent years against various groups of religious believers, the protection of the right to religious freedom must be one of the most urgent responsibilities of the international community,” he said.

These violations against the right to freedom of religion impact believers of nearly all religions around the world, by both State and non-State actors.

He highlighted the February 4 meeting between Pope Francis and the Grand Imam Ahmad Al-Tayyeb, one of the leading figures in Sunni Islam, who, in their landmark joint Declaration on Human Fraternity for World Peace and Living Together, affirmed that every person “enjoys the freedom of belief, thought, expression and action,” called for the protection of places of worship, and advocated for the establishment of equality under the law under the concept of full citizenship for all, including minorities.

Ambassador Samuel Brownback, the US Ambassador at Large for International Religious Freedom, called upon the international community urgently to join the effort to advance worldwide religious freedom.

“You only have to look briefly to see some dire situations of people in faith around the world,” he said, noting that in many countries, if someone is not part of the majority faith, they are likely being persecuted. We need your advocacy. The situation is dire and we can’t just talk about it, we have to do something.”

Ambassador Brownback said 84 countries were present at a ministerial meeting last year in Washington to explore practical ways to fight threats against religious freedom and discrimination based on faith.

He said that one practical way States can help strengthen religious freedom is through education, by empowering youth to accept those of differing beliefs.

“Textbook materials can be derogatory or event hateful towards religious minorities,” he said, suggesting that something as simple as changing textbooks is one of the many solutions to bridge the gaps between different faith communities and resolve religious tension.

Resolving religious tension is often a matter of life or death for many believers. Archbishop Ignatius Kaigama of Jos, Nigeria spoke to the reality of his Archdiocese and country, where the terrorist group Boko Haram threatens both the Christian minority as well as other Muslims who do not share Boko Haram’s extremist ideology.

“Thousands of people in Nigeria have been maimed, dehumanized and killed,” he said. “The bitter rivalry and violence in the name of religion gives the wrong impression that religion is a force of evil.”

Many Christians in Archbishop Kaigama’s community have lost family members to Boko Haram.

He said that protecting religious freedom leads to peacebuilding, and alluding to the relative harmony in which Christians and Muslims live in Southern Nigeria, he accentuated the tumultuous tensions caused by Boko Haram and the Fulani herdsmen in his community in Northern Nigeria.

Archbishop Kaigama called for more interreligious dialogue between the two religions and said he has tried to set an example by building meaningful relationships of mutual trust with Islamic leaders in his community, who share the common goal ending the atrocities inflicted by Boko Haram. 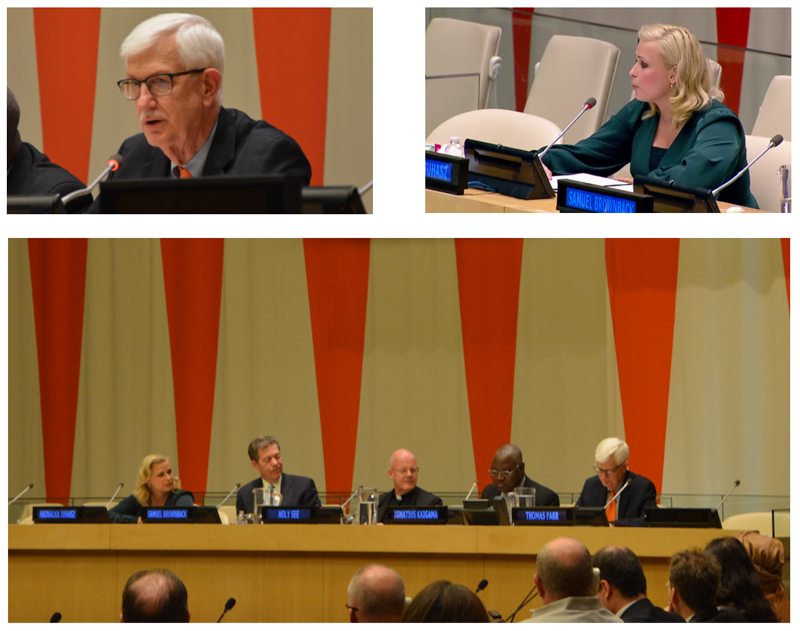 Dr. Thomas Farr, President of the Religious Freedom Institute, said that evidence supports the argument for increasing freedom of religion through interreligious dialogue.

He emphasized that religious freedom is a fundamental right, necessary for the safeguarding of all other human rights.

Dr. Hajnalka Juhász, Ministerial Commissioner and Member of the National Assembly of Hungary, said that Hungary has multiple projects to support religious freedom internationally and focuses in particular on protecting and helping persecuted Christians in the Middle East and Africa, particularly Iraq, where Christians have lived for centuries.

In 2003, she said, 1.5 million Christians lived in Iraq. Their number has now decreased to 250,000. Hungary is helping Christians forced to flee due to violent persecution by ISIS return home, especially through the Hungarian government’s rebuilding homes, Churches and public buildings in the town of Teleskoff, Iraq.

Many homes and ancient cultural heritage sites, including churches, have been destroyed by the terrorists. For Christians to return home, they must have an adequate place to settle, with homes, schools and hospitals rebuilt and ready for society to reintegrate.

“Rebuilding the Christian community can play a key role in peacebuilding and religious tolerance,” she said. This will require well-orchestrated efforts by governments and civil society, that she hoped other countries would join in developing.

About 300 people attended the conference.

Archbishop Auza's remarks can be found here.
To watch the event in its entirety, click here. 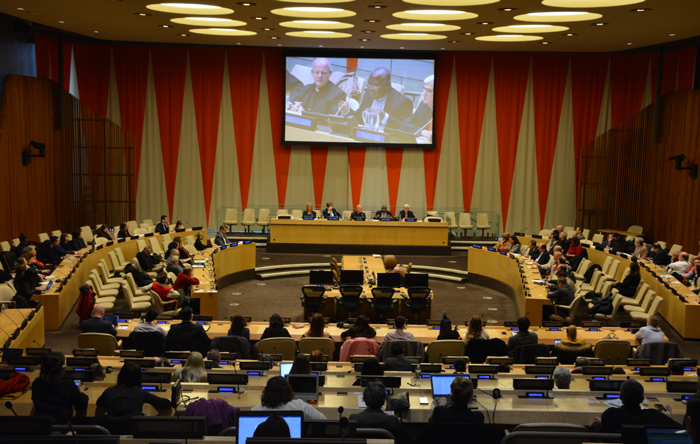 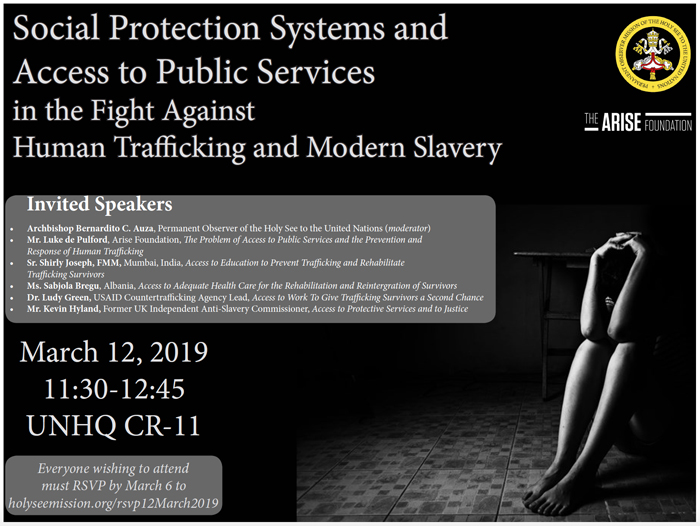 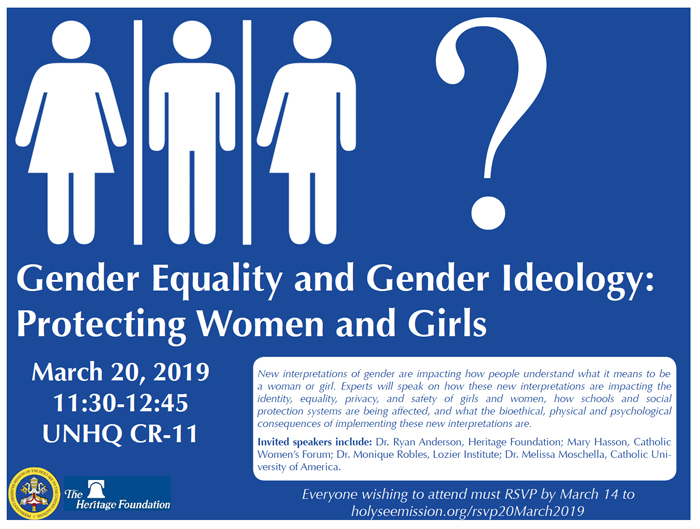 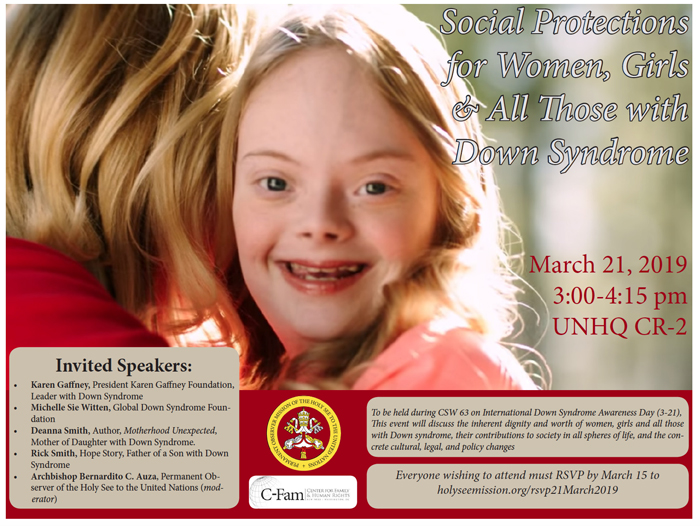 Social Protections for Women, Girls and All Those with Down Syndrome
in commemoration of International Down Syndrome Awareness Day