Our website is being upgraded and may show errors while we work. Please check back in a few hours.
May 11, 2019

On May 6, Archbishop Bernardito Auza, Permanent Observer of the Holy See to the UN gave a during the Fourteenth Session of the United Nations Forum on Forests, taking place at UN headquarters in New York from May 6-10.

In his statement, Archbishop Auza said that it is becoming increasing clear that forests need attention and protection against the rapid depleting of their biodiversity and endangering the vital relations that could alter the entire ecosystem not to mention impact all those who depend on forests for their dwelling, livelihood, cultural heritage and social structure. Because of increased urbanization, he said, many can overlook or downplay forests’ irreplaceable benefit. All decisions must be made with the full and meaningful participation of those most impacted by them, who ought to be protagonists of environmental conservation with their rights and values respected. He stressed in particular the situation of the Amazon and mentioned the upcoming Synod of Bishops for the Pan-Amazon Region and said that the Holy See supports the Forum’s efforts to foster an integral ecology, stating that better management of forests is crucial in our care for our common home and those who live in it. 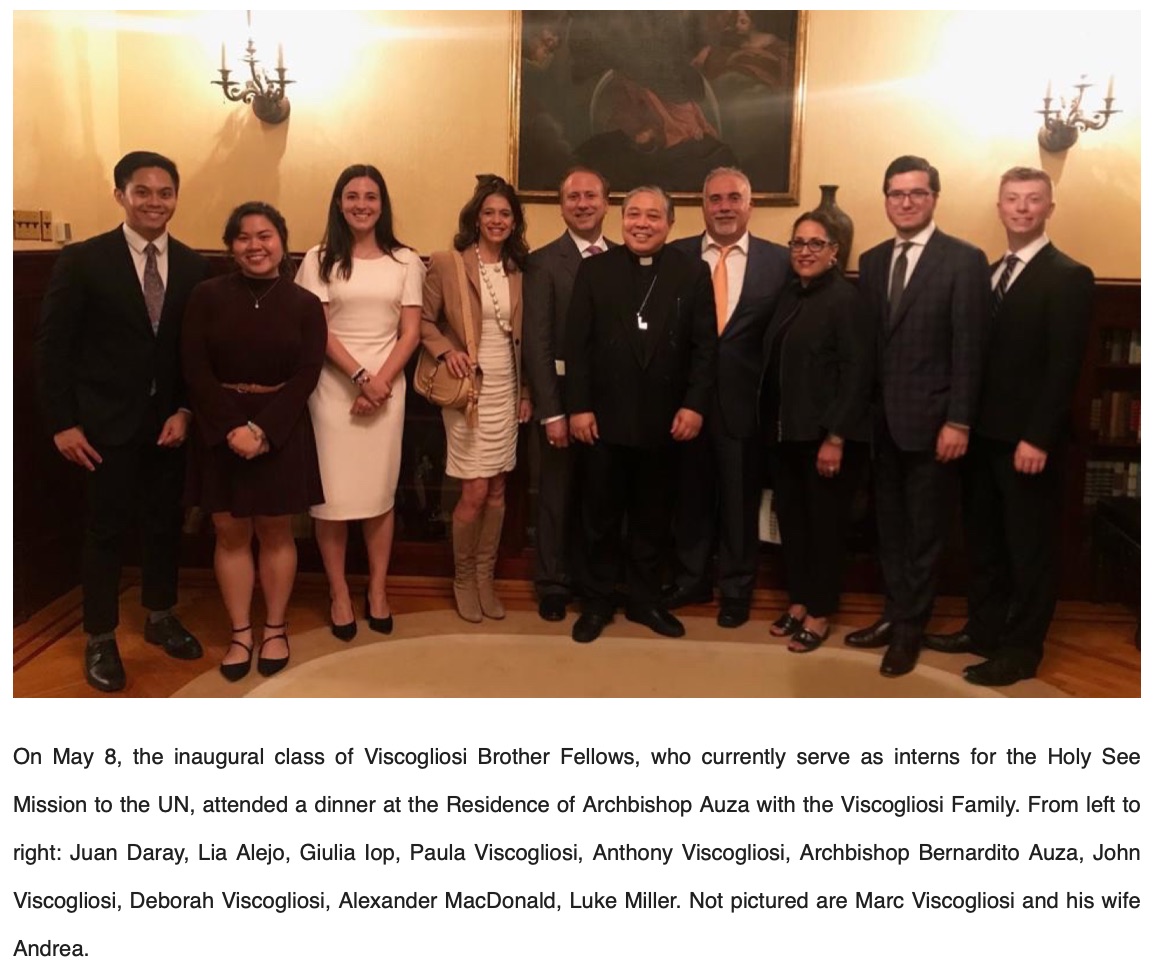 On May 8, the inaugural class of Viscogliosi Brother Fellows, who currently serve as interns for the Holy See Mission to the UN, attended a dinner at the Residence of Archbishop Auza with the Viscogliosi Family. From left to right: Juan Daray, Lia Alejo, Giulia Iop, Paula Viscogliosi, Anthony Viscogliosi, Archbishop Bernardito Auza, John Viscogliosi, Deborah Viscogliosi, Alexander MacDonald, Luke Miller. Not pictured are Marc Viscogliosi and his wife Andrea.

After attending the 2018 Path to Peace Gala, Anthony Viscogliosi, who with his brothers John and Marc head Viscogliosi Brothers LLC, won a silent auction item to attend a dinner with Archbishop Auza at the Holy See residence.

During the dinner he asked how he might be able to assist in the work of the Holy See Mission. Among the various suggestions given to him by Archbishop Auza and members of the Holy See staff was to help out with the expanding program for interns at the Mission, especially helping out those interns whose expenses in New York were not covered by fellowship stipends from their respective universities and graduate schools.

In response to the need, and having seen the fruits of an internship program at several of their companies, the Viscogliosi Brothers decided to make an initial three-year commitment to fund a fellowship program for those young people accepted as interns for the Holy See Mission who are in financial need to cover expenses such as rent, meals on nights and weekend, and other such costs.

The program began in January and five interns were accepted as inaugural Viscogliosi Brothers Fellows: Alexander MacDonald of Canada, Giulia Iop of Italy, Juan Daray and Lia Alejo of the Philippines, and Luke Miller of the USA.

“I am very grateful to Anthony, John, Mark Viscogliosi and their families for their generosity,” Archbishop Bernardito Auza said, “and I know how grateful the first fellows are. New York is expensive. For those who do not receive stipends from their universities or who come from families with means, ordinary expenses like rent can become a real stress. Some interns in the past have moonlighted as tutors, nannies, translators and other odd jobs to make ends meet, something that they were doing after the intense work at the U.N. I’m delighted that the interns in financial need will no longer have that stress.”

According to Father Roger Landry, who directs the interns and fellows program for the Mission, he said that the decision of the Viscogliosi Brothers to fund a fellowship program at the Mission “is without question the result of the prayers of many needy interns over the course of the last few years!”

He said that the Viscogliosi Brothers, however, are committed to do more than merely help fellows financially.

“They also want to help catalyze the formation of an alumni network for those who have served as interns and fellows at the Mission,” Fr. Landry stated, "and to work to recruit others to help expand the internship and fellowship program, not only to assist in the work of the Mission but also to expose more young people to the great learning experience of working with the Holy See’s Mission at the United Nations.”

At the upcoming Path to Peace Gala, Fr. Landry said, there would be an opportunity for others to contribute to an endowment being formed precisely for the purpose of expanding the internship program at the Mission.

Preparing for the Path to Peace Gala Dinner

Aid to the Church in Need is one of the greatest defenders of religious freedom throughout the world as well as protectors of persecuted Christians. It carries out so many different charitable works as well. To find out more about the extensive work of this year’s honorees, you are invited to watch the video here.