Our website is being upgraded and may show errors while we work. Please check back in a few hours.
June 28, 2019

against Religious Believers and 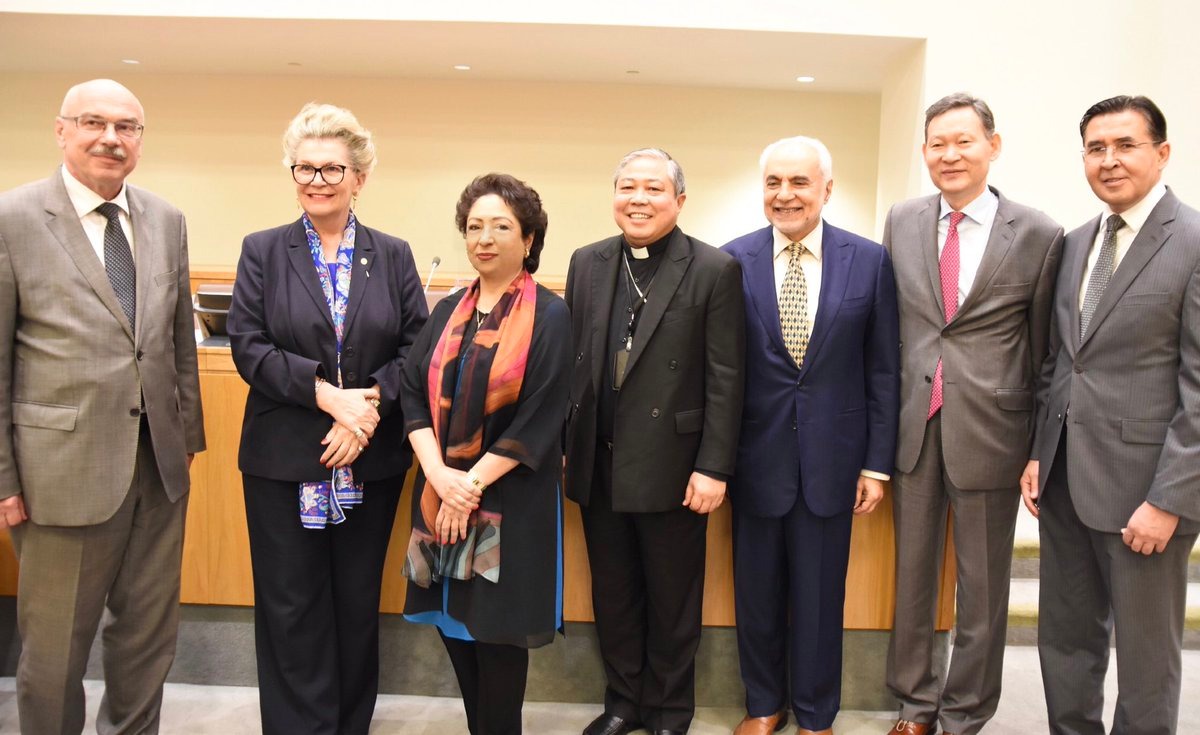 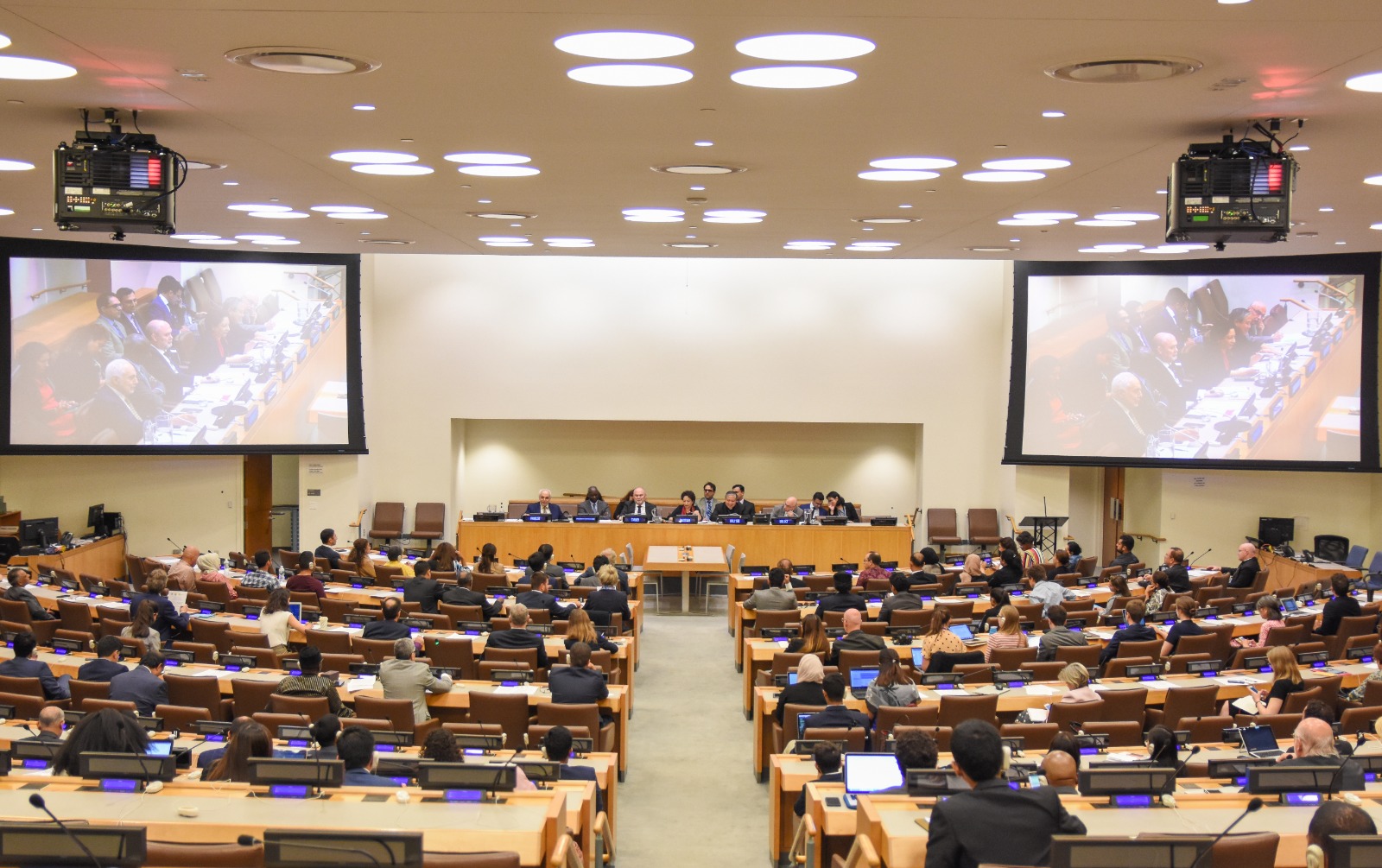 In remarks given at the “Countering Terrorism and Other Acts of Violence Based on Religion or Belief: Fostering Tolerance and Inclusivity" event held at the United Nations on June 24, Archbishop Bernardito Auza, Permanent Observer of the Holy See to the UN, defended the fundamental “right of all citizens to freedom of religion (and) equality before the law.” Only when this basic demand of justice is respected will “harmonious and fruitful coexistence among individuals and communities” be possible, he said.

The panelists condemned the recent attacks on religious sites and worshippers. These attacks are, in Auza’s words, turning “havens of peace and serenity” into “execution chambers” for those “simply for coming together to practice their religion.” Ambassador Maleeha Lodhi, Permanent Representative of Pakistan, noted that “hateful words and views can kill,” referencing the attacks on religious sites in Christchurch, Sri Lanka and Pittsburgh. She asked all present to work together to eradicate extremist ideology.

Ambassador Feridun Hadi Sinirlioğlu, Permanent Representative of Turkey to the UN, stated that “we can no longer turn a blind eye” to the growth of violence against religious believers, as well as increasing examples of xenophobia, racism, and other forms of intolerance.

Archbishop Auza outlined a seven-pronged approach to combat acts of violence against religious believers, beginning with the need for countries to protect all citizens equally and to address the cultural factors necessary for tolerance and inclusivity.

Auza called for a “robust promotion of the right to freedom of conscience, religion, and belief, as enshrined in Article 18 of the Universal Declaration of Human Rights.” A failure to protect these rights, he said, “fosters an environment in which believer’s rights, including their right to life, are more easily violated.”

He drew attention to reports by the U.N. Special Rapporteur, the U.S. Commission on International Religious Freedom and the 2018 Report on Religious Freedom in the World by Aid to the Church in Need, all of which noted, he said, that “increasingly aggressive forms of nationalism hostile to religious minorities have led to systematic stigmatization and intimidation of religious minority groups.”

Auza also highlighted the necessity of a “positive and respectful separation of religion and state,” noting that, whilst the two spheres ought to collaborate, there should be no confusion about their roles. Quoting Pope Francis, he cautioned that without careful management, “religion risks being absorbed into the administration of temporal affairs and tempted by the allure of worldly powers that exploit it.”

He called upon world leaders to condemn the use of religion to justify violence and to ensure that “religions themselves not be blamed for homicidal madness.” Rather, the blame should remain with those who “misinterpret or manipulate religious belief to commit evil.”

He expressed the Holy See’s gratitude for the General Assembly resolution condemning “all terrorist attacks against places of worship that are motivated by religious hatred, including Islamophobia, anti-Semitism, and Christianophobia.” He noted that attacks on Christians are often unacknowledged or described using “novel euphemisms.” Confronting the evil of terrorism, he said, requires “the courage and candor to call things by their proper names.”

To be successful in the fight against terrorism and religiously motivated violence, there must be a real commitment to intercultural and interreligious dialogue. Auza stressed that “religion is not a problem but a part of the solution.”

The landmark “Document on Human Fraternity for World Peace and Living Together,” signed on February 4 in Abu Dhabi by Pope Francis and the Grand Imam of Al-Azhar, underlines the importance of interreligious and intercultural dialogue for mutual understanding, tolerance, and cooperation.

Similarly, Imam Feizel Abdul Rauf, founder of Cordoba House, stated that when religious believers of various faiths “live in orientation towards the Absolute, the propensities within us towards violence of any kind diminish.”

Archbishop Auza, Dr. Lodhi and Ambassador Sinirlioğlu emphasized the role of education in combating hatred. “The importance of forming the head and the heart cannot be overstated,” remarked Auza, “especially for young people.”

The panelists also discussed the challenges of technology and social media, which can propagate hate speech across borders. Mr. Adama Dieng, Special Advisor to the Secretary-General on the Prevention of Genocide, noted that “no country is immune from hate speech and the impact it has on our societies.”

While countering violence and fostering tolerance and inclusivity will be difficult, Auza and his fellow panelists expressed hope that we can all work to be part of the solution. 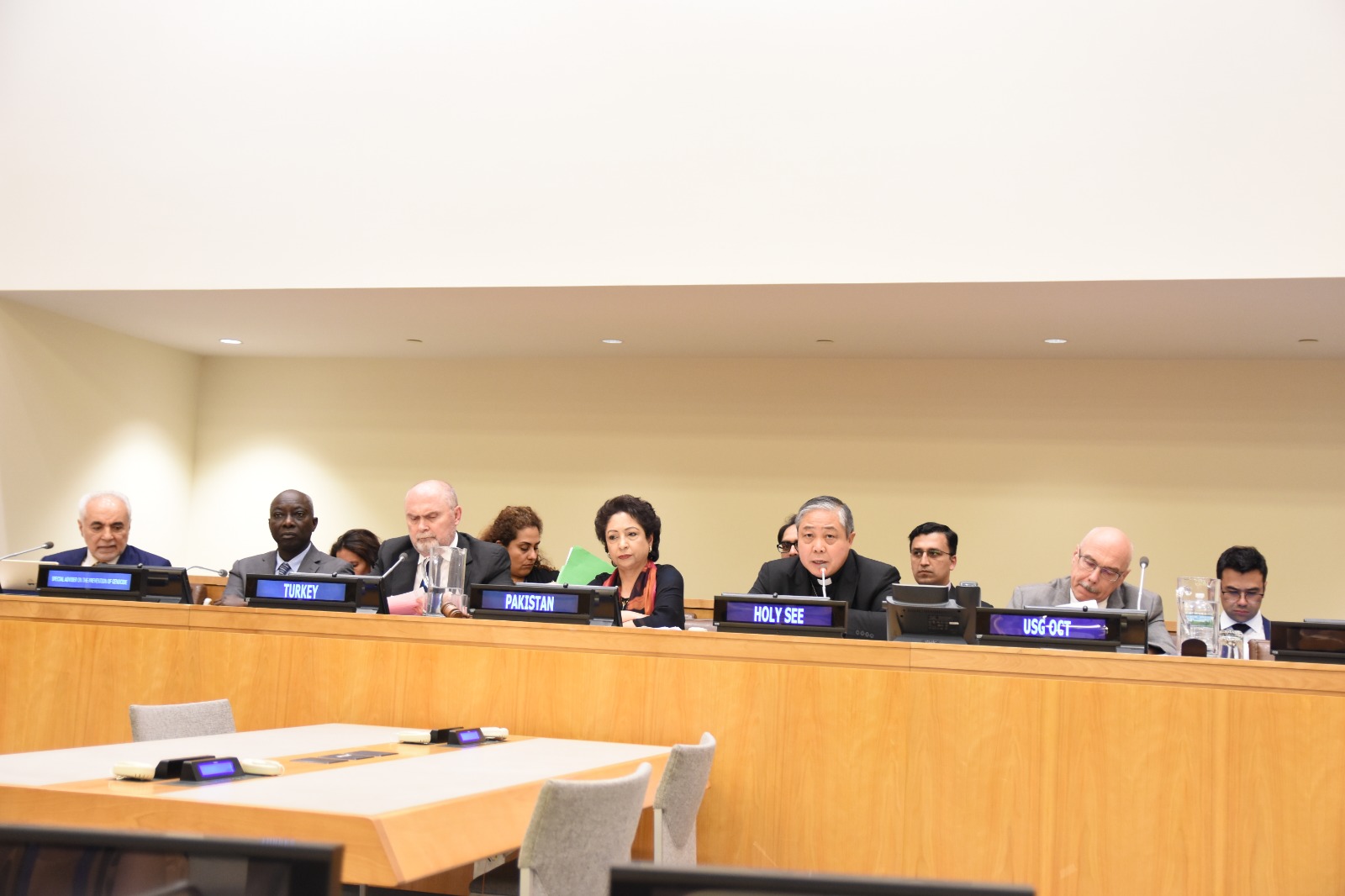 Statement by H.E. Archbishop Bernardito Auza
Apostolic Nuncio, Permanent Observer of the Holy See
Pledging Conference of the Ad Hoc Committee of the General Assembly for the Announcement of Voluntary Contributions to the
United Nations Relief and Works Agency for Palestine Refugees in the Near East (UNRWA)
United Nations, New York, 25 June 2019

My Delegation would like to take this opportunity to thank once more the United Nations Relief and Works Agency for Palestine Refugees in the Near East (UNRWA) for its work in favor of the Palestine refugees by providing them with the most basic human needs like education, health care, social services and housing.

The Holy See believes that in a situation that shows no sign of being resolved quickly, a fully functional UNRWA remains the best means to prevent the situation in the region from worsening in a way that would bring even greater cost to the international community. Moreover, the worrying lack of horizon, in particular for the young people, could contribute to a further degradation of the security situation in the region.

Like UNRWA, various entities and organizations of the Catholic Church provide education, health-care and social services to Palestine refugees. Generous donors associated with the Catholic Church around the globe make these activities possible. Assistance programs are not limited to Palestine refugees, but also to Palestinians in Palestine. The Permanent Observer Mission of the Holy See to the United Nations helps to promote fundraising drives to provide thousands of university scholarships and subsidized or free medical care at the Holy Family Hospital in Bethlehem.

The Holy See hopes that, sooner than later, a fair and durable solution to their predicament may be reached, through the resumption of final status negotiations between the interested parties, aimed at reaching a two-State solution, with Israel and a Palestinian State, living side by side in peace and security within internationally recognized borders. 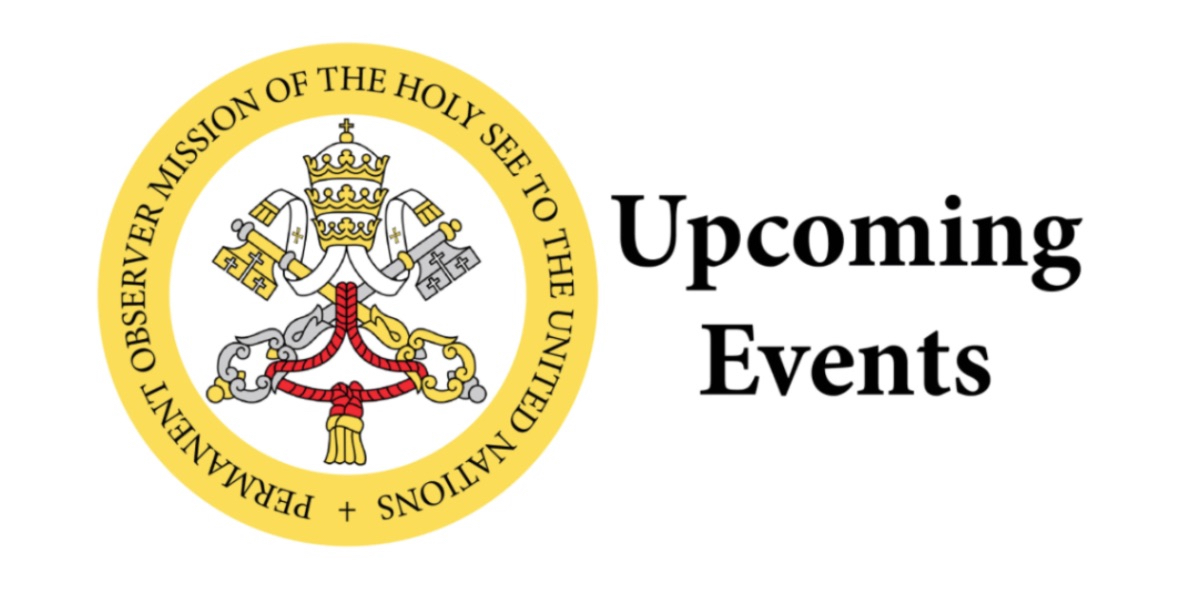 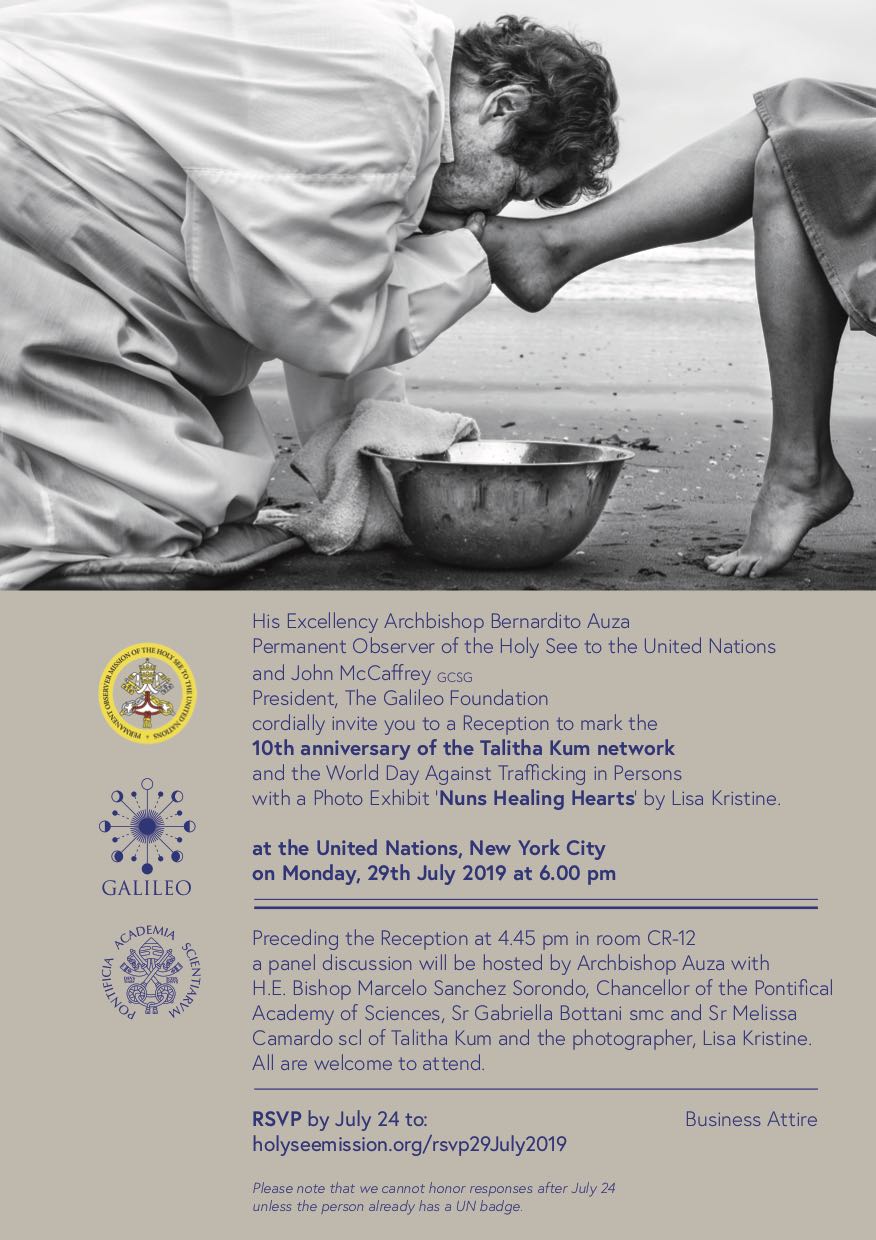