Our website is being upgraded and may show errors while we work. Please check back in a few hours.
September 20, 2019 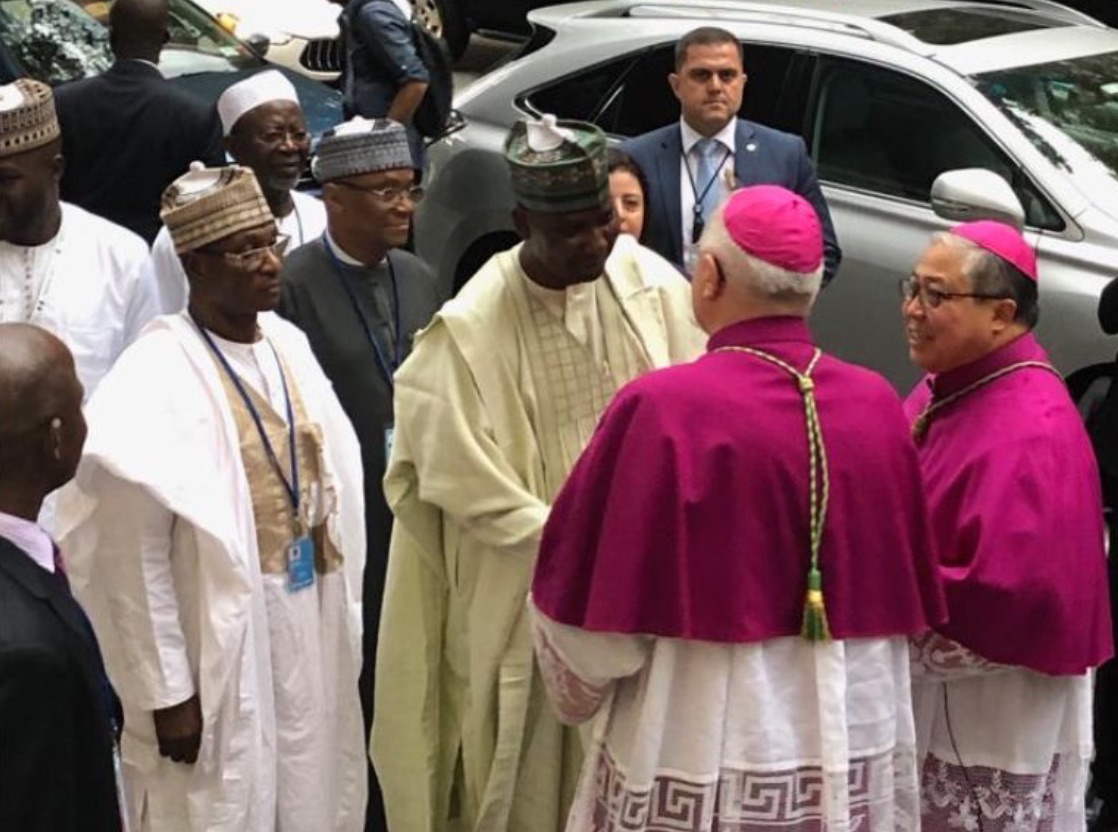 President of the 74th Session of the General Assembly, His Excellency Tijjani Muhammad-Bande greets Bishop Hinder and Archbishop Auza.

With the words attributed to Saint Francis, "Make me an instrument of your peace,” Bishop Paul Hinder, O.F.M. Cap., Apostolic Vicar of Southern Arabia, finished his September 16 at meditation at the 33rd annual Prayer Service hosted by the Permanent Observer Mission of the Holy See for the United Nations Community at the Church of the Holy Family.

Attended by more than 300 diplomats, religious leaders, UN personnel, and members of the general public, the Prayer Service was held on the eve of the opening of the 74th Session of the General Assembly.

Bishop Hinder recalled the visit of Pope Francis to the United Arab Emirates in February this year and said it was a "concrete step to achieve peace.” It was "the first time in history a Roman Pontiff entered the territory of the Arabian Peninsula.” On February 4, the Pope signed the Document on Human Fraternity for World Peace and Living Together together with the Grand Imam of Al-Azhar in Egypt, Ahmad Al-Tayyeb, which Bishop Hinder characterized as "an invitation to reconciliation and fraternity among all believers, indeed among believers and non-believers, and among all people of goodwill" and a timely reminder to those gathered to pray as they begin a new year at the United Nations. 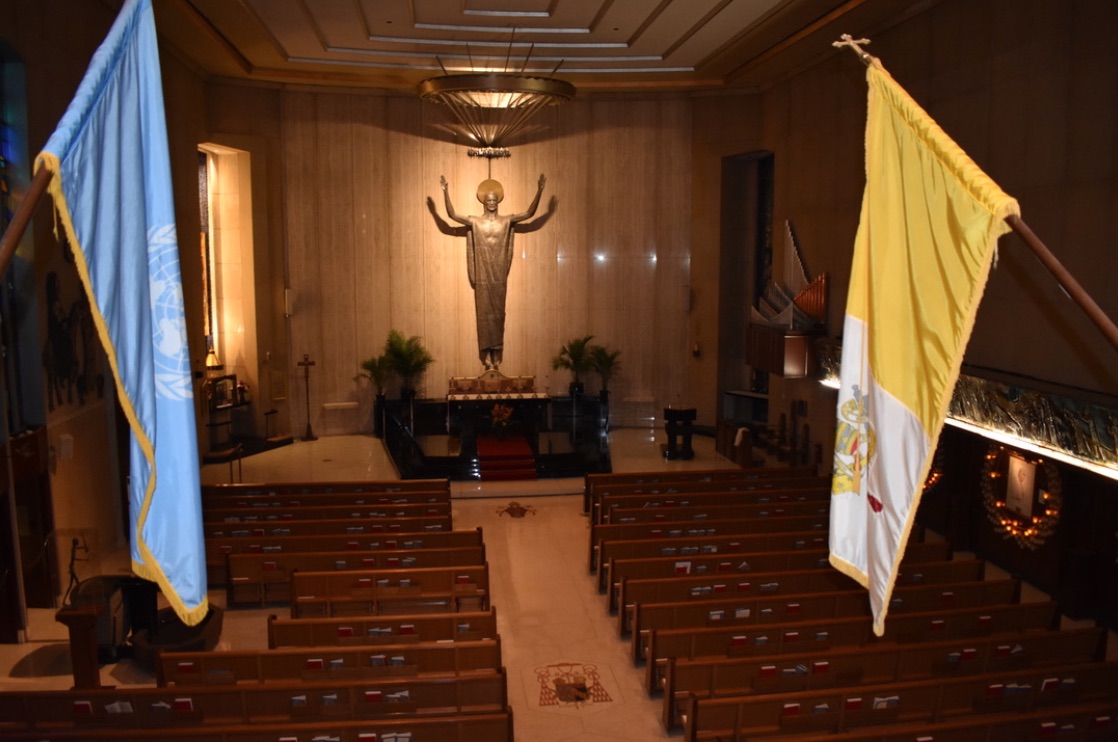 The Church of the Holy Family, where St. Paul VI prayed in 1965 during his trip to the United Nations, awaits the guests. It is located on E. 47th Street, between First and Second Avenues.

"This is where your own deliberations in the coming days must lead: in making provisions for protecting the family as the fundamental nucleus of society and humanity; providing right education for children; avoiding everything that could lead people to extremism and violence,” he said.

The Document speaks "on behalf of the countless victims of violence and war: of those who are tortured and made to flee for the land of their birth: of all the innocent human beings that are killed; of the poor, the destitute, the marginalized and those who are most in need of help," he added.

Reverend Father Gerald Murray, Pastor of the Holy Family Church welcomed the standing-room-only crowd of attendees, reminding them of the address of Pope Francis to United Nations General Assembly four years ago, when he reminded the international community that “the full meaning of individual and collective life is found in selfless service to others and in the sage and respectful use of creation for the common good."

Archbishop Bernardito Auza, Permanent Observer of the Holy See Mission to the UN, presided over the Prayer Service, leading those present in three prayers composed by Pope Francis, including the prayer for peace said in the Vatican Gardens in June 2014 in the presence of Shimon Peres of Israel and Mahmoud Abbas of Palestine.

"Renew our hearts and minds, so that the word that always brings us together will be ‘brother’ and ‘sister,' and our way of life will always be that of peace!"

James Wetzel, Director of Music for the Manhattan Parishes of St. Vincent Ferrer and St. Catherine of Siena, leads the choir.
Five of the Holy See Mission interns await the guests.

UN Secretary-General António Guterres in his remarks commented on the message communicated by such a Prayer Service to begin a new session of the General Assembly.

“Our mix of faiths and nationalities mark us as a diverse family. Our presence here sends an important message,” he said.

"We are recognizing our human connection and reaffirming respect for each other's traditions," Guterres added, which he said is what inspired the two new initiatives he introduced this year, to combat hate speech and to support the safety and sanctity of religious sites.

"I have been appalled by the attacks this year on holy sites and have spoken out in solidarity at mosques and synagogues around the world," he stated. “Ultimately, we are united by our common humanity and by one common cause – the fulfillment of our Organization's founding Charter."

At a time when there is a "global crisis of values," Guterres called the international community to work together, mindful of the "noble yet practical words of the United Nations Charter" that "guides us in affirming the equality and dignity of all human beings and in pursuing peace, human rights and sustainable development throughout the world" 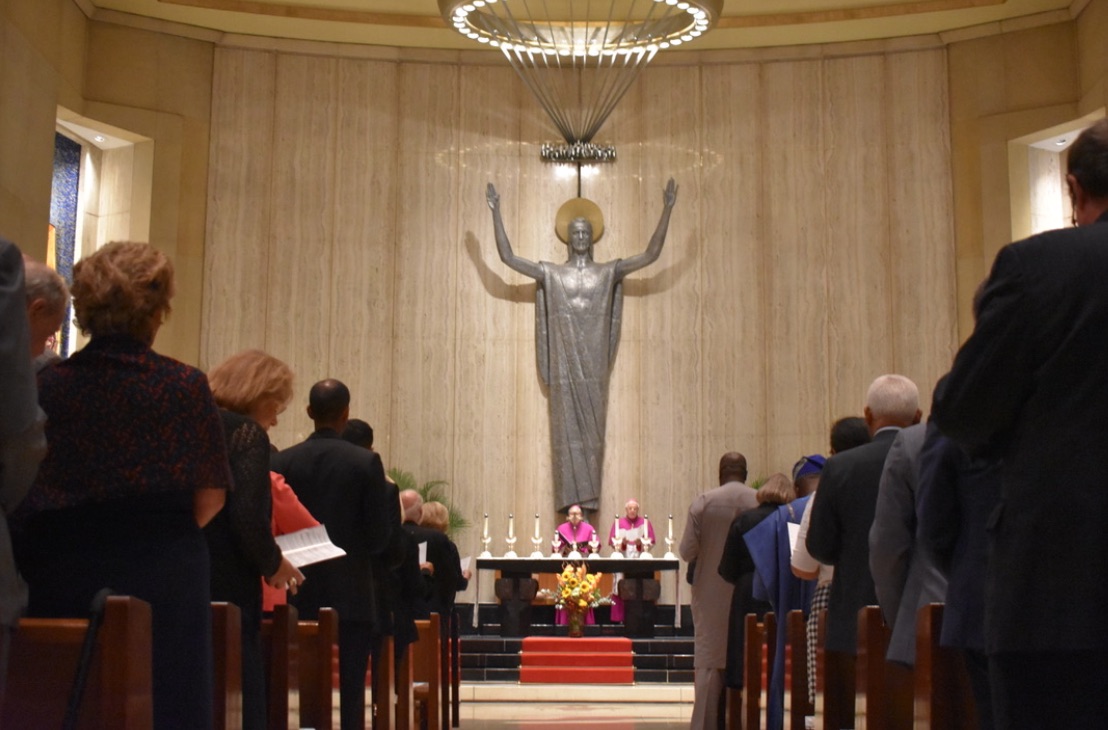 Archbishop Auza leads all those present in a Prayer for our Common Home.

Hours after being sworn in as President of the 74th session of the General Assembly, His Excellency Tijjani Muhammad-Bande of Nigeria expressed his gratitude to God for His blessings. The Prayer Service, he said, "reminds us of the place of faith and the role that empathy and love can play in agreeing when we want to disagree."

It is important, he said, to seek the help of God in the work of the United Nations and to "do our very best to make a positive difference to the life of especially the vulnerable and marginalized."

Prayers of petition were read in the six languages of the United Nations before the final prayer led by Archbishop Auza, in which he asked God to "help us to accomplish what we have not yet been able to do on our own so that we might be your instruments to bring about a world of peace, justice and fraternal welcome, where no one is left behind, everyone's dignity and rights respected and protected, and people's integral development advanced and achieved."

The eight-person choir was directed by James Wetzel, Director of Music of the Parishes of St. Vincent Ferrer and St. Catherine of Siena in New York, singing various polyphonic prayers for peace, in praise of creation, asking that all nations praise the Lord, and finishing with a choral blessing he himself composed, entitled, ‘The Lord Bless and Keep You’. 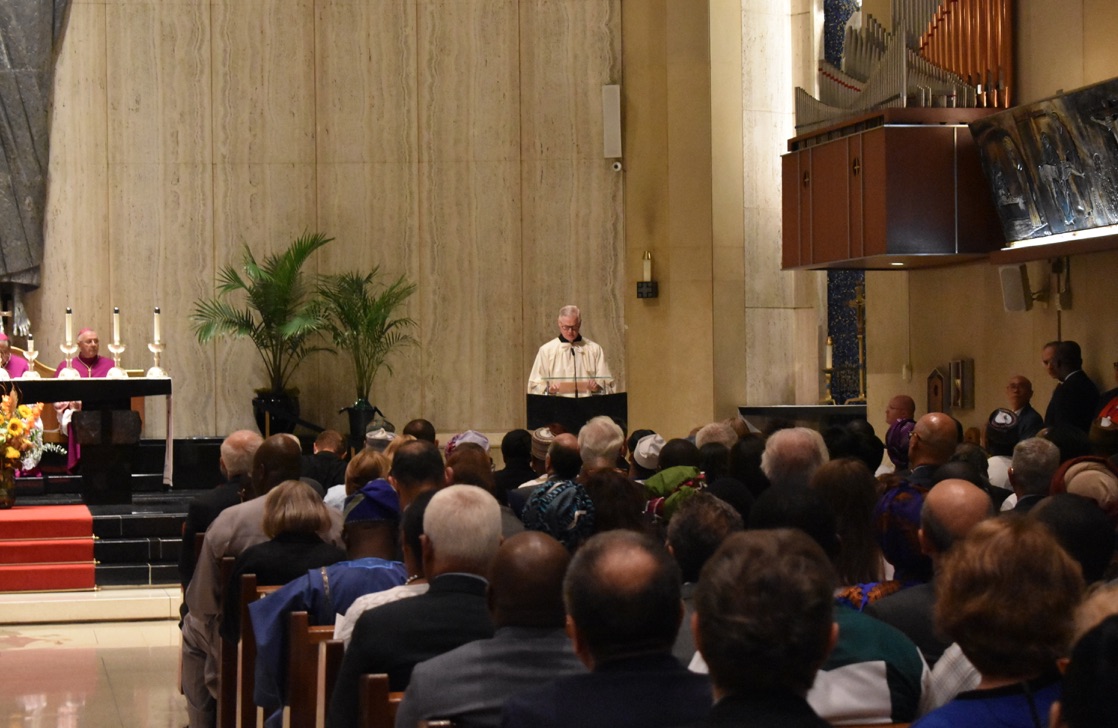 Father Gerald Murray, Pastor of the Church of the Holy Family, welcomes those assembled. 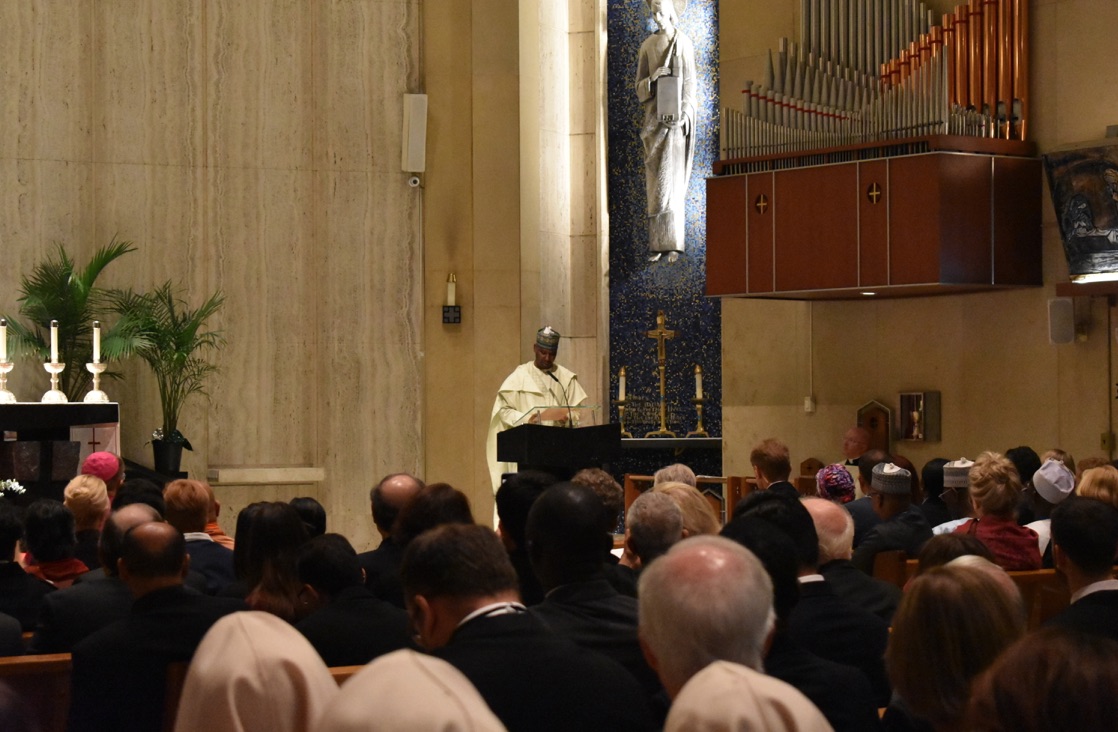 President of the 74th Session of the General Assembly, Tijjani Muhammad-Bande, shares his thoughts on the importance of faith 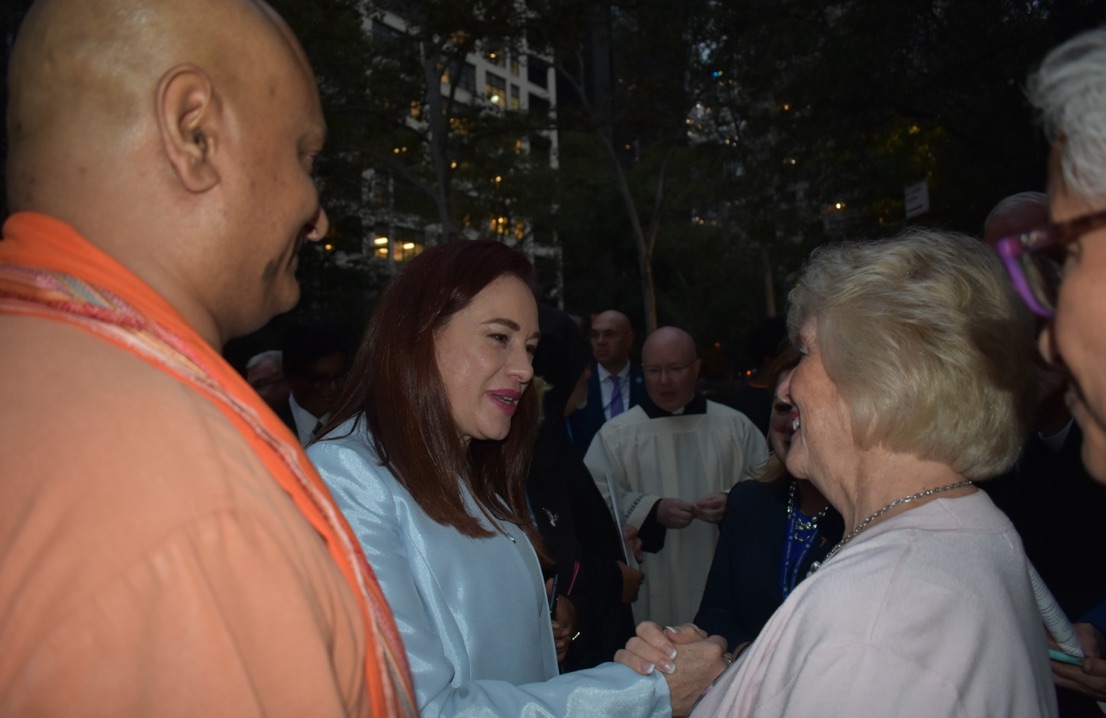 President of the 73rd Session of the General Assembly, Maria Fernanda Espinosa Garcés, greets NGO leaders after the Prayer Service. 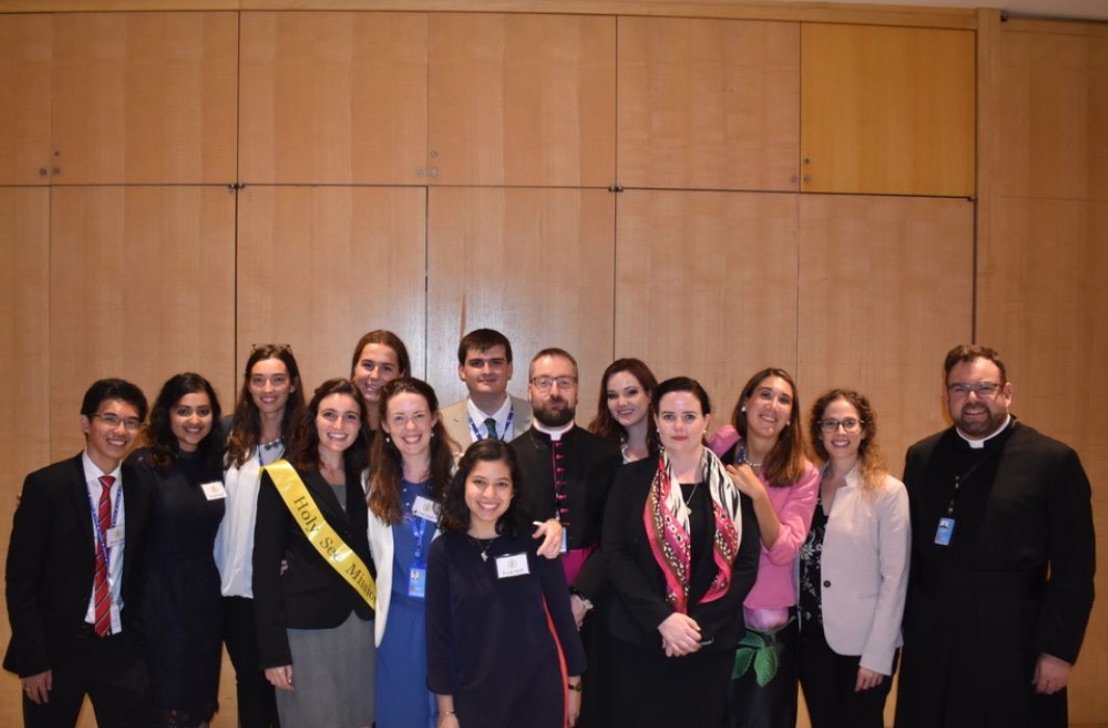 Interns and various staff members of the Holy See Mission at the reception held after the Prayer Service in the undercroft of Holy Family Church.

Cardinal Parolin addresses the General Assembly on behalf of the Holy See in September 2016.

Cardinal Pietro Parolin, Secretary of State of the Holy See, is traveling from the Vatican to New York to serve as the Head of Delegation for the Holy See for the General Debate of the 74th Session of the United Nations General Assembly.

Parolin, 64, a native of Schiavone, Italy, was appointed Secretary of State by Pope Francis October 15, 2013. He has led the Holy See’s Delegation to the High-Level session of the UN General Assembly in 2014 and 2016. He was also present for the visit of Pope Francis to the United Nations in 2015.

During his week in New York, in addition to delivering the intervention of the Holy See at the General Debate, scheduled for 10:45 am on Saturday, September 28, he will also participate and speak at High-Level UN Meetings on Universal Health Coverage, Forests, Climate Action, Syria, the Central African Republic, Sustainable Development, Financing for Development, Human Trafficking, Facilitating the Entry into Force of the Comprehensive Nuclear-Test-Ban Treaty, the Elimination of Nuclear Weapons, Ensuring a Future for Persecuted Christians, the Implementation of the SAMOA Pathway for Small Island Developing States.

He will also speak at Dinners hosted by The Appeal to Conscience Foundation and Fordham University’s International Political Economy and Development Program, meet with the Catholic bishops from around the New York metropolitan area, and host a thank you reception for Holy See staff, experts, interns as well as the Board Members and Gala Dinner Committee Members of the Path to Peace Foundation.