Our website is being upgraded and may show errors while we work. Please check back in a few hours.
Holy See Mission Hosts Annual UN Prayer Service with a Plea for Nuclear Disarmament 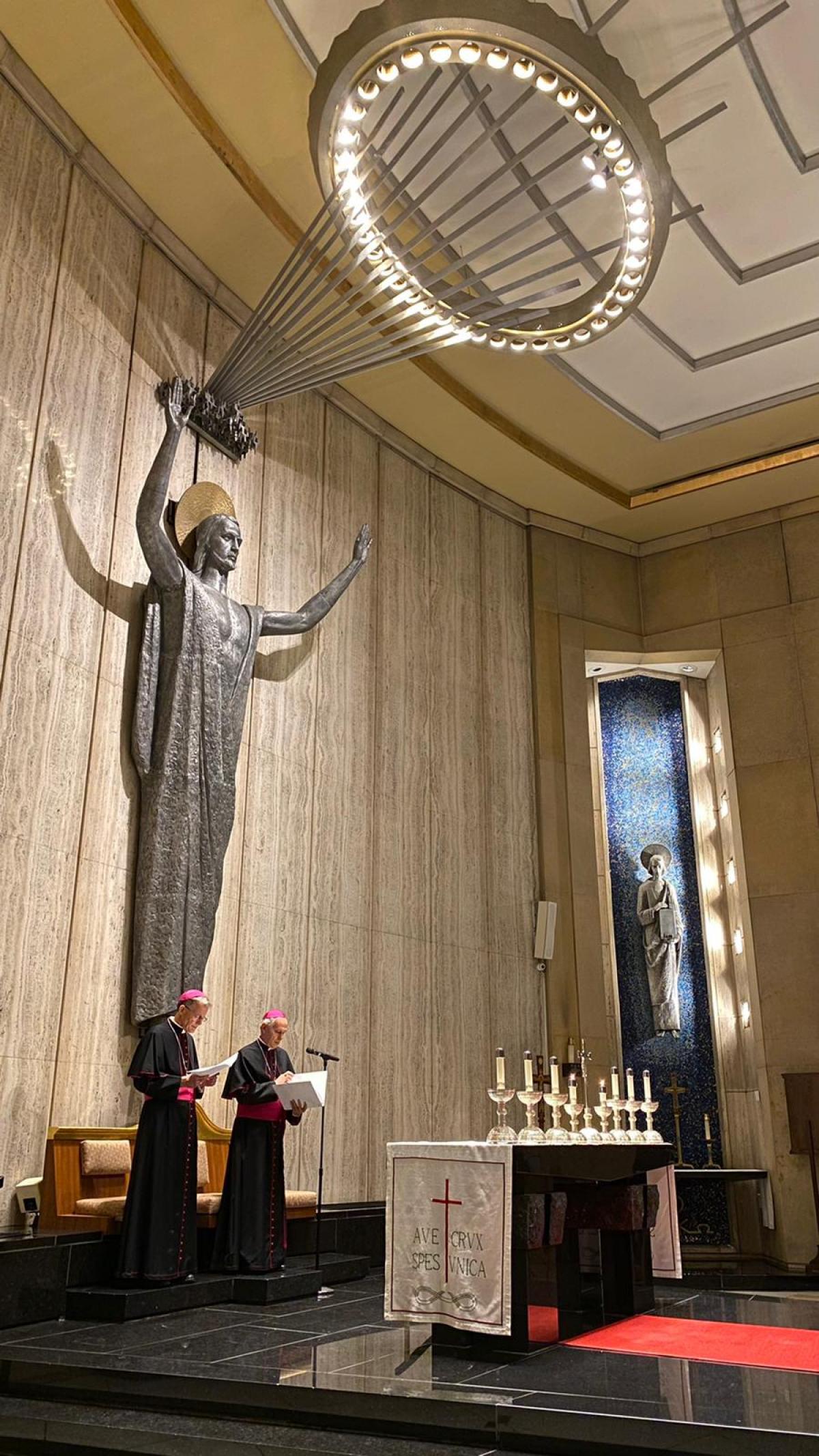 On Monday, September 12, 2022, at 6 p.m, approximately 200 people gathered in the pews of the United Nations parish, Holy Family Church, among them 38 Permanent Representatives, along with religious leaders, UN delegates and staff, representatives from various non-governmental organizations, and members of the Holy See team.

Since 1986, on the eve of the opening of each General Assembly of the United Nations, the Permanent Observer Mission of the Holy See has held an annual Prayer Service for the United Nations diplomatic community and personnel, together with some religious leaders from the New York area. This year it was an opportunity to highlight accomplishments of the 76th Session of the General Assembly and look toward the upcoming 77th Session.

The Prayer Service took the form of Vespers for the Most Holy Name of Mary. Archbishop Gabriele Caccia, Permanent Observer, called the Service “an occasion to entrust to God the needs of our world.”

This gathering comes two weeks after the conclusion of the tenth Review Conference of the Treaty on the Non-Proliferation of Nuclear Weapons (NPT). The NPT is the only legally binding commitment to limit nuclear arsenals by the nuclear-weapon States. After four weeks of discussions at the UN headquarters in New York, however, Parties to the treaty were unable to adopt a consensual outcome document.

Archbishop John C. Wester of Santa Fe, New Mexico, offered a reflection on these events. drawing from his recent pastoral letter, “Living in the Light of Christ’s Peace – A Conversation Toward Nuclear Disarmament.” New Mexico, as he notes in his letter, is the home of Los Alamos Laboratory, the birthplace of nuclear weapons and the atomic bombs which destroyed Hiroshima and Nagasaki. In his remarks, Archbishop Wester addressed those who believe he is naïve to think that multilateral, verifiable nuclear disarmament is achievable. He pointed out that the history of nuclear weapons is replete with near misses, miscalculations, and accidents. “With the war in Ukraine,” he warned, “we are now facing the most serious nuclear threats since the middle 1980s. Isn’t it the height of naiveté to think that humanity can survive on into the future as long as nuclear weapons exist?”

In his reflection, Archbishop Wester relayed his experience of traveling to Hiroshima in 2017. He spoke movingly about schoolchildren who, on the day of the bombing, were attracted to the bright light generated by the nuclear explosion, ran to the windows, and unknowingly, to their deaths.

While light normally brings new life and clearer vision, he said, the light of the bomb at Hiroshima was “not a light of peace but a false light of death and destruction.” The Hiroshima bombing occurred on August 6, the Feast of the Transfiguration. He described the story in Scripture in which “Jesus takes three disciples up the mountain, and there is transfigured into bright, white light. His disciples are terrified, and fall to the ground as if dead, but he touches them and says, ‘Rise, do not be afraid.’” These witnesses saw who Jesus really is, he said: “the light of the world, and the healing light of peace.”

Archbishop Wester looked towards the light of Christ’s peace: “we can see a new promised land of peace, love, nonviolence, and fraternity.” He urged the United Nations community to take concrete steps to begin the process of nuclear disarmament, dismantle weapons, clean up the land, and spend the vast resources instead on structures for conflict prevention and resolution.“If we take up the task of nuclear disarmament,” he said, “we will not only make our land and our world more peaceful and more secure, but we will also finally learn to live fully in the light of Christ’s peace.”

Secretary-General Guterres, in his video message, noted that although the 77th session’s challenges range from war to climate change, “we must stay true to the essential values common to all religions and central to the United Nations.” Chief among these values, he emphasized, is trust in one another.

President Kórösi, in his in-person address, highlighted the motto of his presidency: Solutions through Solidarity, Sustainability, and Science. When we rise, we rise together, he said; “When any society, any Member State, in our organization succeeds, it represents a success for all of us.”

In the face of a crisis for one, President Kórösi said, all States have a duty to come together and to work together to realize peace, justice, and wellbeing for all. “In the long term,” he added, “humanity will thrive only if all members are treated equally with respect and love,” emphasizing that science and faith, if harnessed together, “hold the keys to building a peaceful and sustainable future.”

Father Gerald Murray, Pastor of the Church of the Holy Family, offered a welcome to all attending and Archbishop Caccia presided. The Vespers were sung by the Schola Cantorum of the Dominican Parish of St. Vincent Ferrer and St. Catherine of Siena, directed by James D. Wetzel.

Archbishop Wester  concluded with a plea for action. “I call on all of us, Children of God, to take up the challenge of nuclear disarmament by engaging in the vital conversation that will lead to concrete action steps toward this goal. I know I am asking quite a lot but so did Jesus when he sent out the disciples two by two on their mission of peace. And like those disciples, we are missioned by Christ, empowered by Christ, and strengthened by Christ for the task at hand. We do well to follow Jesus, to be true peace makers, before it is too late.”