By His Eminence Cardinal Pietro Parolin

Secretary of State of His Holiness Pope Francis

and Head of the Delegation of the Holy See to the 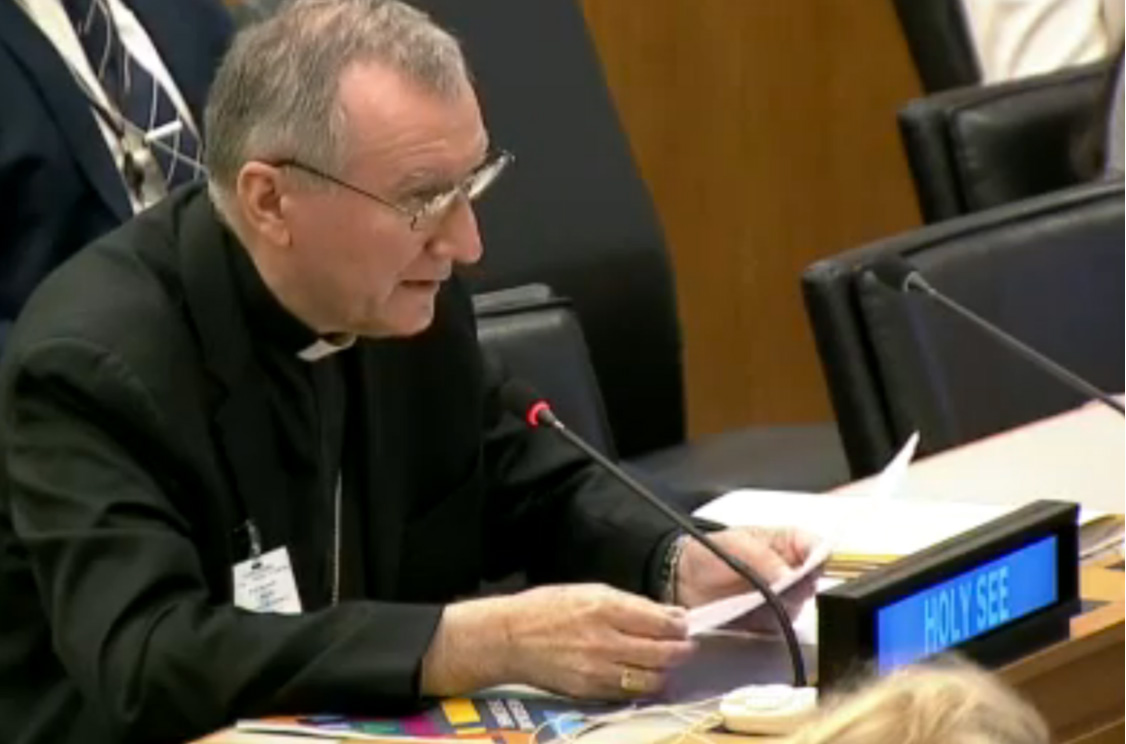 The Holy See expresses its gratitude to you and to the Secretary General for convening this historic gathering of global leaders to address one of the biggest humanitarian, political, social and economic issues of our time, namely that of the large movements of refugees and migrants. This is a moral imperative that those who carry responsibility for the wellbeing of peoples can neither avoid nor ignore.

The values expressed in the Charter of the United Nations, particularly the respect for fundamental human rights and the dignity and worth of the human person, must be at the heart of our response to the plight of refugees and migrants.  These same fundamental principles are affirmed by most major religious traditions in the world and by people of good will. The Golden Rule enjoins us to treat refugees and migrants the way we would want others to treat us if we were in their situation.

Thus, as we try to find the most effective ways to respond to the challenges posed by the unprecedented movements of refugees and migrants, while taking into consideration the legitimate concerns of societies and countries, we should not lose sight of the real people, with names and faces, behind the staggering statistics. Refugees need our protection, but migrants also need respect for their rights, as well as solidarity and compassion. This approach requires the full commitment of “a humanity that before all else recognizes others as brothers and sisters, a humanity that wants to build bridges and recoils from the idea of putting up walls to make us feel safer.”[1]

Our presence in this Institution, in fact, is a sign of our acknowledgement that walls and barriers among persons and peoples – whether physical or legislative – are never an acceptable solution to social problems.  Such barriers divide persons and peoples, cause tensions among them and weaken and impede development. Instead, despite difficulties, electoral interests and understandable and legitimate concerns, our responsibilities demand that we overcome fears and obstacles and work for a world where individuals and peoples can live in freedom and dignity.

The enormous and complex challenges that immense movements of refugees and migrants pose can only be solved if we all work together. My Delegation insists on the need for cross-border dialogue and cooperation among nations, international organizations and humanitarian agencies. In this regard, partnership with religious organizations and faith communities is particularly helpful, for they are interested and skilled parties who are often first-responders to refugee and migrant movements across borders and to those internally displaced.

All individuals have the right to remain in peace and security in their homelands and countries of origin. Yet millions risk everything, live in miserable conditions and thousands have lost their lives while trying to escape conflicts, violence, abject poverty, social exclusion, open persecution and various forms of discrimination. Forty-eight million children are forced to leave their homes, and thousands of unaccompanied migrant children go missing and become prey to abusers and exploiters.

The Holy See wishes to reiterate once more its urgent appeal for political and multilateral efforts to address the root causes of large movements and forced displacement of populations, especially conflicts and violence, countless violations of human rights, environmental degradation, extreme poverty, the arms trade and arms trafficking, corruption, and the obscure financial and commercial plans connected with them. At the same time, it is necessary to ensure that development funds are equitably and transparently assigned, delivered and used appropriately.

The Holy See emphasizes the importance of this Summit, which echoes Pope Francis’ warnings about the globalization of indifference.  In doing so, it is motivated by a reiterated commitment to protect each and every person from violence and discrimination, to guarantee appropriate and quality health-care and to protect those who are vulnerable, particularly women and children.

My Delegation notes that the political Declaration endorses urgently needed commitments to help both refugees and other forced migrants, since they share root causes that require a shared response. Likewise, the Declaration takes into account national realities, capacities, priorities, and levels of development, in a manner that is consistent with the rights and obligations of States under international law.  Along these lines, we welcome the strong call for all States to work toward the elimination of the practice of child detention, which is never in the best interest of the child.

The Holy See welcomes the agreement for a closer working relationship between the International Organization for Migration and the United Nations, and wishes to express its interest in participating in the continuing efforts of the Global Forum on Migration and Development and the Global Migration Group. We sincerely hope that these initiatives will stimulate better management of person-centered responses to refugee and migrant movements at global, national, and local levels.

Allow me to conclude with the words of Pope Francis that express his message to this Summit: “I invite political leaders and lawmakers and the entire International Community to consider the reality of persons forcefully uprooted with effective initiatives and new approaches to protect their dignity, to improve the quality of their life and to address the challenges that emerge in modern forms of persecution, oppression and slavery. It is, I stress, about human persons, who appeal to solidarity and assistance, who are in need of urgent interventions, but also and above all of understanding and goodness.”[2]

[1] Pope Francis, Meeting with the People of Lesvos and with the Catholic Community. A remembering of the Victims of Migration, Lesvos, 16 April 2016.

[2] Pope Francis, Address to Participants in the Plenary Assembly of the Pontifical Council for the Pastoral Care of Migrants and Travelers, 24 May 2013.