Our website is being upgraded and may show errors while we work. Please check back in a few hours.
Mozart’s Requiem on the Centenary of the End of World War I
By H. E. Archbishop Bernardito AuzaApostolic Nuncio and Permanent Observer of the Holy See to the United Nations 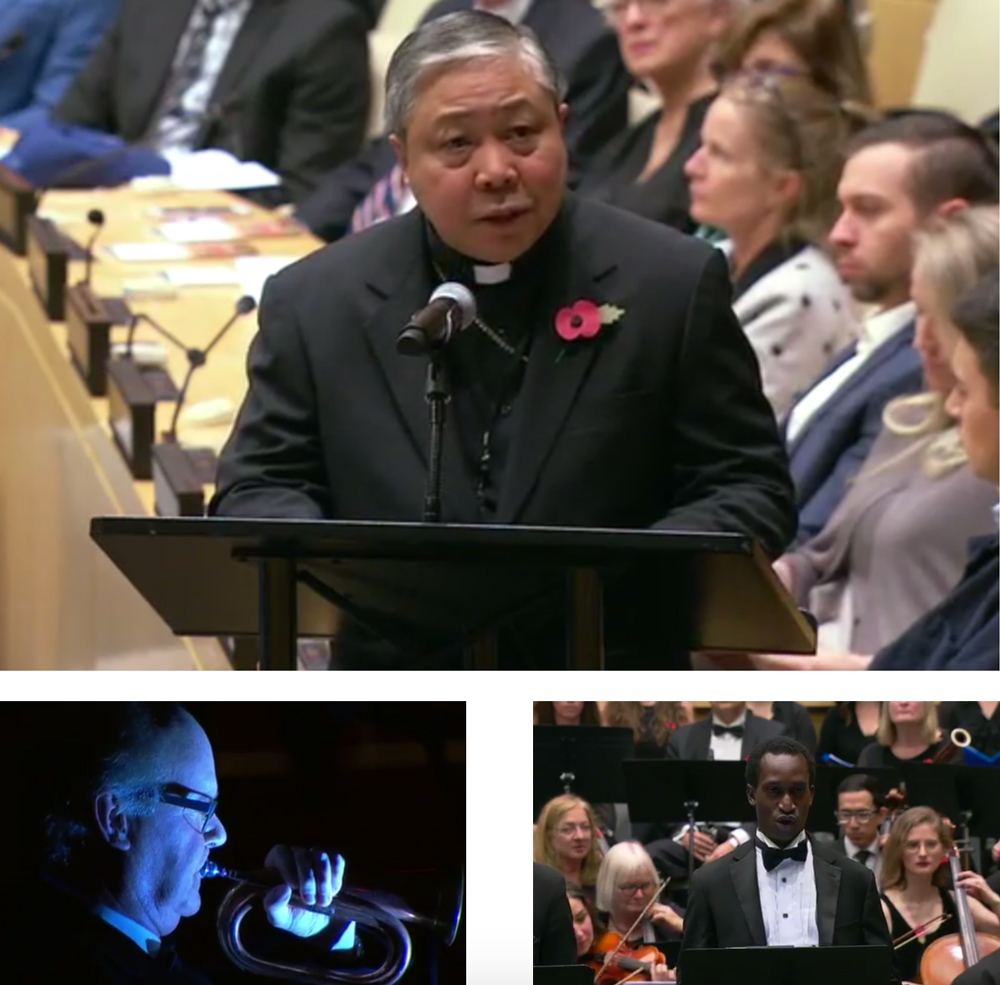 Opening Remarks by H.E. Archbishop Bernardito Auza
Apostolic Nuncio, Permanent Observer of the Holy See
Mozart’s Requiem in D Minor: On the Occasion of the Centenary of the End of World War I, in Commemoration of those who have died in war and conflict
UN Headquarters, 12 November 2018

I would like to welcome you here tonight to this performance of Mozart’s Requiem in D Minor on the occasion of the centenary of the end of the First World War, which the Permanent Observer Mission of the Holy See to the United Nations is honored to be sponsoring, together with the Mountbatten Institute, the Permanent Observer Mission of the Sovereign Order of Malta, and the Priory in the USA of the Order of St. John.

World War I featured a then unparalleled scale of death and destruction. Nine million combatants and seven million civilians perished as a direct consequence of the war. So many millions more died as a result of revolutions made possible because of the war, unresolved political questions and rivalries that helped precipitate World War II, and serious social health emergencies like the 1918 influenza pandemic that couldn’t adequately be fought because of the raging conflict.

A century after the Armistice, we come together to commemorate those who died in the Great War and in so many wars and conflicts in the hundred years since. We come together somberly hoping to learn from the mistakes not only that led to World War I, but also from the lessons contained in the Armistice itself. Pope Francis mentioned these lessons at the beginning of this year in his address to the diplomats accredited to the Holy See.

“From the ashes of the Great War,” he said, “we can learn two lessons that, sad to say, humanity did not immediately grasp, leading within the space of twenty years to a new and even more devastating conflict. The first lesson is that victory never means humiliating a defeated foe. Peace is not built by vaunting the power of the victor over the vanquished. … This leads to a second lesson: peace is consolidated when nations can discuss matters on equal terms. This was grasped a hundred years ago … by the then President of the United States, Woodrow Wilson, who proposed the establishment of a general league of nations with the aim of promoting for all States, great and small alike, mutual guarantees of independence and territorial integrity. This laid the theoretical basis for that multilateral diplomacy, which has gradually acquired over time an increased role and influence in the international community as a whole.”

Our work at the United Nations to prevent the scourge of war and promote and build peace is a fruit from the tree that grew out of World War I’s and II’s ashes.

Yesterday, on the actual 100th anniversary of the Armistice, Pope Francis spoke to the tens of thousands assembled in St. Peter’s Square about how the memory of World War I should lead the world to profound and urgent conversion.

“The historical page of the first world conflict is a severe warning to all,” he said, “to reject the culture of war and to seek every legitimate means to put an end of conflicts, which still bloody several areas of the world. …  While we pray for the victims of that enormous tragedy, we say forcefully: let us invest in peace, not in war.”

Tonight’s concert marking the centenary of the end of World War I is a small investment in that culture of peace. We are so grateful to the UN Staff Recreation Council Symphony Orchestra and Choir, joined tonight by the Chamber Choir Inspire, for all their hard work in making tonight possible and beautiful.

The musical works they will be playing and singing are among the most moving ever written to help people mourn with hope. Barber’s Adagio for Strings is perhaps the most famous funereal orchestral work of the 20th Century. Mozart’s Ave Verum Corpus has helped countless people to find meaning in the tragic death of loved ones within the death of Jesus of Nazareth on the Cross. Mozart’s Requiem in D Minor brilliantly sets to music the words of the Roman Catholic Requiem Mass that was used at the funeral Masses for million of soldiers and civilians during and after the War. And the solemn notes of the Last Post remain a century later the final farewell at the burials of soldiers of Commonwealth countries, in traditions emulated very closely by other nations.

This music will touch our souls and embolden them to help us work together so that armistices may come to all those regions where war and conflict still rage and so that the blood of so many millions may fertilize our commitment to building a culture of lasting peace.

Thank you once again for coming to this evening of reflection and remembrance through music and please join me in welcoming the conductor of the UN Staff Recreation Council Symphony Orchestra and choir, Mr. Predrag Vasić.

To watch the event in full on UN Web TV, click here.