Our website is being upgraded and may show errors while we work. Please check back in a few hours.
Intervention during Comprehensive Nuclear Test Ban Treaty Conference 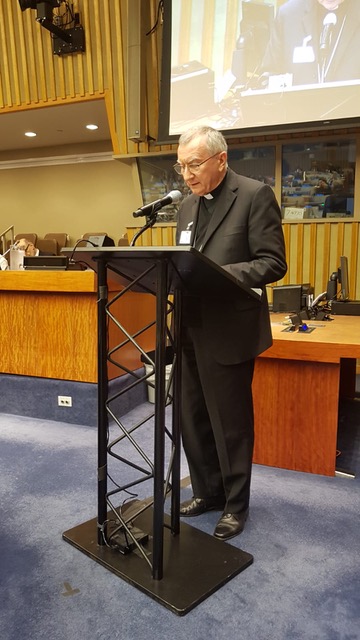 The Holy See ratified and adheres to the Comprehensive Nuclear-Test-Ban Treaty (CTBT) as an expression of its longstanding conviction that a ban on nuclear tests, nuclear non-proliferation and nuclear disarmament “are closely linked and must be achieved as quickly as possible under effective international control.”1 Due to the importance the Holy See attributes to the CTBT as an essential part of multilateral efforts to advance peace and global security, each further year without the entry into force of the Treaty is a stark reminder that the promise and hope brought by the Treaty has yet to become reality. The Holy See is, therefore, pleased to take part in this Conference – and thereby confirms once more that every single step, all efforts and discussions to bring about the entry into force of the Comprehensive Nuclear-Test-Ban Treaty has the full support of the Holy See.

My Delegation is pleased to join others in reiterating our urgent appeal to the remaining States whose ratification is necessary for the Treaty to enter into force to move towards ratification. In so doing, these States have an opportunity to demonstrate wisdom, courageous leadership and a commitment to peace and the common good of all.

The entry into force of the CTBT is all the more imperative when one considers the contemporary threats to peace, from the continuing challenges of nuclear proliferation to the major modernization of nuclear weapons arsenals of some of the Nuclear Weapons States. Both nuclear proliferation and new modernization programs are contrary to the fundamental principles of the CTBT and, more importantly, they undermine international security. Furthermore, as Pope Francis has noted, “the escalation of the arms race continues unabated and the price of modernizing and developing weaponry, not only nuclear weapons, represents a considerable expense for nations. As a result, the real priorities facing our human family, such as the fight against poverty, the promotion of peace, the undertaking of educational, ecological and healthcare projects, and the development of human rights, are relegated to second place”.2

While being realistic about the challenges involved in achieving a world free of nuclear weapons, the difficulties posed by the status quo ante of growing tensions, continued proliferation and modernization programs are far more daunting. Nuclear arms offer a false sense of security. The uneasy peace promised by nuclear deterrence has time and time again proved to be illusory. Nuclear weapons cannot create a stable and secure world. A durable peace and international security cannot be founded on mutually assured destruction or on the threat of annihilation.

Pope Francis has in fact made it clear that this nuclear escalation is morally unacceptable: “Nuclear deterrence and the threat of mutually assured destruction cannot be the basis for an ethics of fraternity and peaceful coexistence”.3 Speaking at an international symposium in 2017, His Holiness voiced grave concern over the catastrophic humanitarian and environmental effects of nuclear weapons use and noted the risk of an accidental detonation as a result of error of any kind.4

Nuclear tests involve the substantial and uncontrolled release of radioactive materials directly into the environment. They have resulted in the largest cumulative dose of man-made radiation unleashed thus far upon populations and the global environment.5 As Pope Francis has said “the natural environment is a collective good, the patrimony of all humanity and the responsibility of everyone. If we make something our own, it is only to administer it for the good of all. If we do not, we burden our consciences with the weight of having denied the existence of others”.6

The non-proliferation regime must work as tirelessly for a comprehensive nuclear-test ban as it does for nuclear disarmament. For that reason, the Holy See signed and ratified the Treaty on the Prohibition of Nuclear Weapons with the aim of moving beyond nuclear deterrence to a world entirely free of nuclear weapons,(7) and affirmed that nuclear weapons are arms of mass and environmental destruction.8

The peace-of-a-sort that is based on a balance of power, with threats and counter-threats, and ultimately fear is an unstable and false peace. In order to respond adequately to the challenges of the twenty-first century, it is essential to replace this logic of fear and mistrust with an ethic of responsibility, and so foster a climate of trust which values multilateral dialogue through consistent and responsible cooperation among all the members of the international community. This requires, as Pope Francis told the diplomatic corps accredited to the Holy See earlier this year, that the international community recognize that an “indispensable condition for the success of multilateral diplomacy is the good will and good faith of the parties, their readiness to deal with one another fairly and honestly, and their openness to accepting the inevitable compromises arising from disputes”.9 The norms embodied in the UN Charter, international humanitarian law, disarmament and arms control instruments, and other elements of international law represent an indispensable commitment to cooperative security and a juridical embodiment of this global ethic of responsibility that is now sorely needed.

At a time of increased tensions, the entry into force of the CTBT would be an essential confidence-building measure and an important manifestation of a commitment to this ethic of responsibility. More than two decades is too long a wait to demonstrate this commitment.

1. Cf. Declaration of the Holy See attached to the Instrument of adhesion to the CTBT, 24 September 1996.
2. Cf. Pope Francis, Message to the International Symposium on the Prospects for a World Free of Nuclear Weapons and for Integral Disarmament, 10 November 2017.

3. Cf. Pope Francis, Message on the occasion of the Vienna Conference on the Humanitarian Impact of Nuclear Weapons, 7 December 2014.

4. Cf. Pope Francis, Message to the International Symposium on the Prospects for a World Free of Nuclear Weapons and for Integral Disarmament. 10 November 2017.

8. Cf. Statement of the Holy See to the 62nd General Conference of the International Atomic Energy Agency, 17 September 2018.
9. Pope Francis, Address to the members of the diplomatic corps accredited to the Holy See for the traditional exchange of New Year greetings, 7 January 2019.