Our website is being upgraded and may show errors while we work. Please check back in a few hours.
Archbishop Caccia Addresses "The United Nations at 75: Catholic Perspectives"
By H. E. Archbishop Gabriele CacciaApostolic Nuncio and Permanent Observer of the Holy See to the United Nations 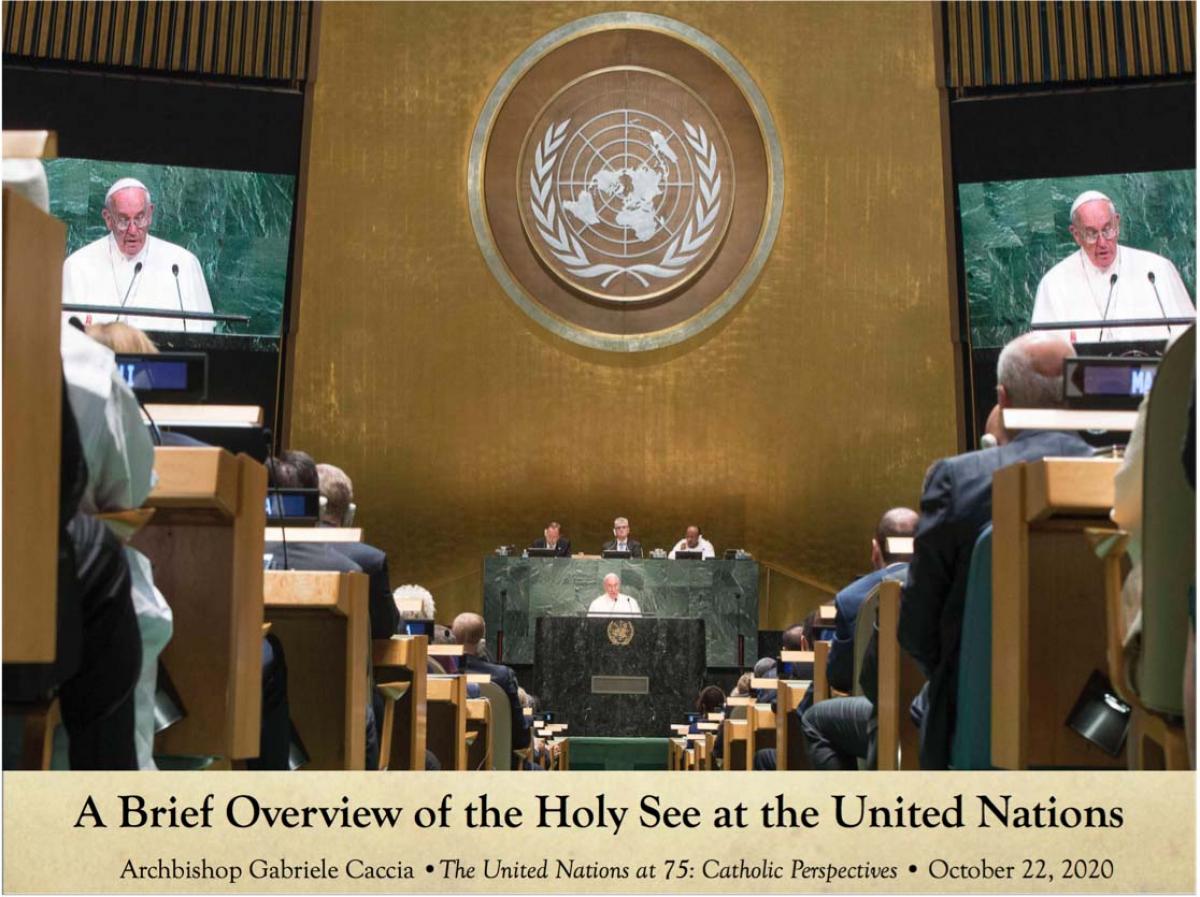 It is a joy for me to be with you today as the world prepares to mark the 75th Anniversary of the United Nations this Saturday.

I would like to thank the Lumen Christi Institute, the Kellogg Institute for International Studies, and America Media, for sponsoring today’s event and to express my appreciation as well to all the co-sponsoring institutions for their important collaboration.

An anniversary is an opportunity to look to the past with gratitude for achievements and with humble resolution to learn from mistakes. It’s also a chance to turn with the wisdom of experience to the present, and with informed hope to the future.

That’s why, as we ponder together Catholic perspectives on the UN at 75, I would like to give a brief overview of the history of the relationship between the Holy See and the United Nations during the past seventy-five years as a means better to understand areas of interaction today. 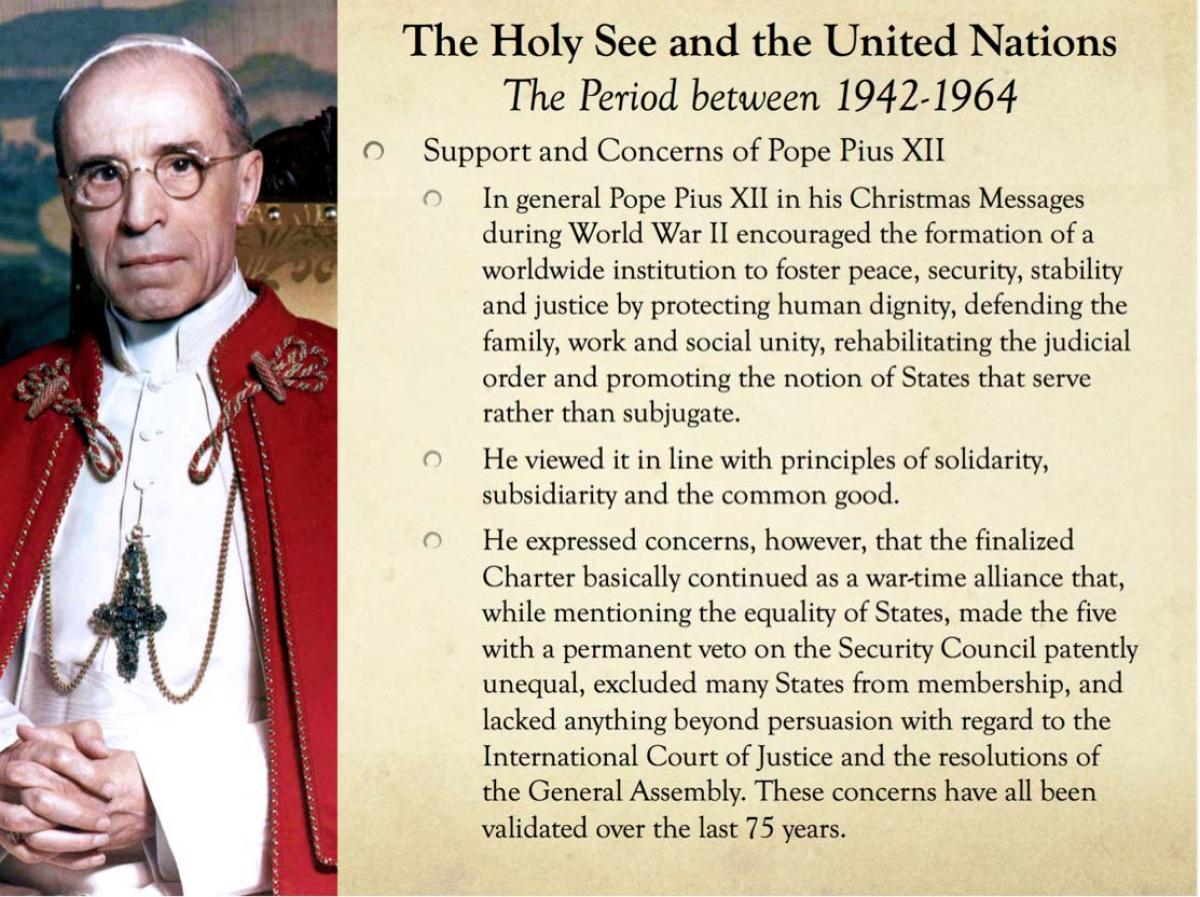 During World War II, when the Allies, after the failure of the League of Nations, began to discuss the idea of a United Nations, Pope Pius XII was encouraged and encouraging.

He gave Christmas addresses in which he promoted the need for a worldwide institution fostering peace, security, stability and justice, one that could protect human dignity, guard the family, defend work and social unity, rehabilitate the international juridical order and catalyze the formation of States that would serve their people rather than subjugate them.

He said in his 1944 Christmas Message that “no one could wish success to this common effort” more than he, and he urged the formation of such a global peace institution in line with the principles of solidarity, subsidiarity and the common good.

When the final version of the UN Charter was proposed and adopted, however, he expressed concern that, rather than being an institution of equality among all nations, it was continuing the war-time alliance among the winning powers and making five countries patently unequal by giving them a permanent veto on the Security Council.

He was also concerned about the fact that the other institutions of the UN — particularly the International Court of Justice and the General Assembly — lacked anything beyond the power of persuasion. Their resolutions and decisions might end up being mere exhortations.

As most experts on the UN will tell you, Pius XII’s initial concerns have been validated. 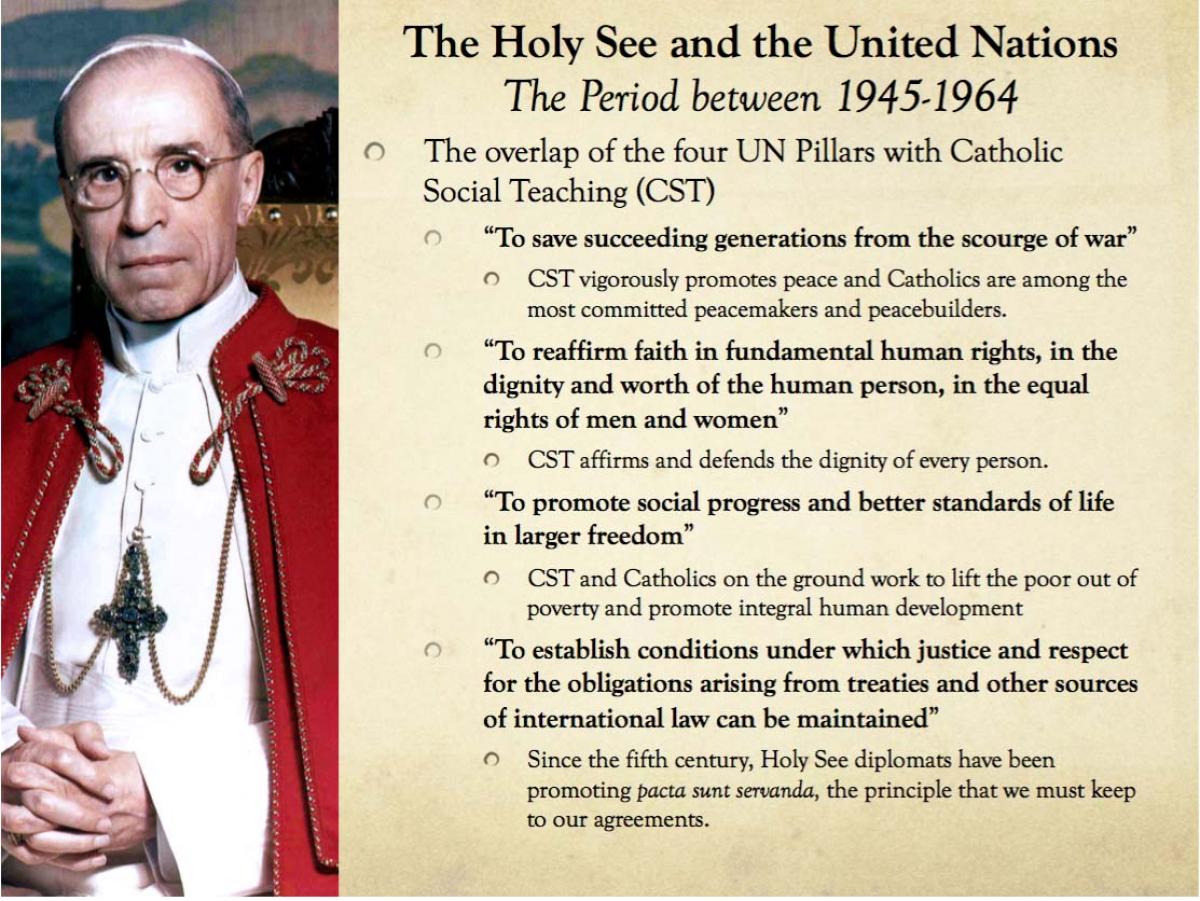 The overlap between Catholic Social Teaching and the UN Pillars

Nevertheless, Pope Pius XII and so many Catholic statesmen and scholars saw a deep overlap between the four pillars of the UN found in the Preamble of the UN Charter, Catholic Social Teaching and Holy See diplomacy, making the participation of Catholics in the UN at its beginnings vigorous and prominent.

In the Preamble of the UN Charter, the “peoples of the United Nations” resolved to “save succeeding generations from the scourge of war” and that’s what Catholic peacemakers and peacebuilders had been doing from the earliest centuries of Christianity.

The world’s peoples jointly committed to promote human rights and the human dignity from which they flow, and Catholic teaching vigorously affirms the equal dignity of every person.

They resolved to promote development in order to bring about social progress and better standards of life, and Catholic missionaries, dioceses, parishes and religious orders have been working since the ancient diakonia to lift the poor out of poverty.

And the peoples of the world determined to establish conditions of justice and promote adherence to international law and treaties, and for 1500 years, the Holy See diplomatic corps has been advocating the principle of pacta sunt servanda, that we must honor our word and fulfill our commitments. 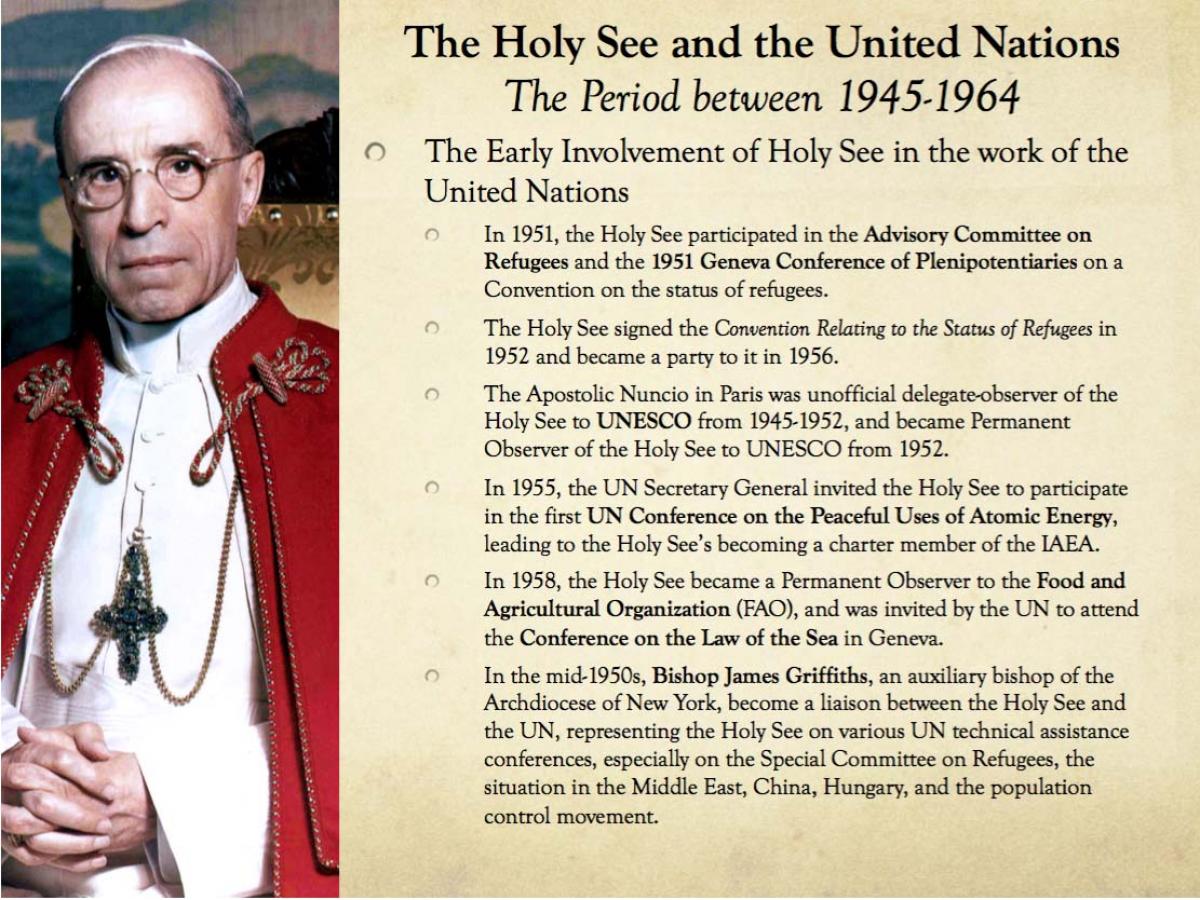 The early interaction of the Holy See with the United Nations

Only 51 countries joined the United Nations 75 years ago this week. The Holy See was not among them.

Some countries were prevented because they were on the losing side of the war, others because they could not meet the entrance requirements concerning troops or financial support.

There was, however, a desire for non-Member States to coordinate with the United Nations for the good of the world.

The UN regularly invited the participation of the Holy See with regard to refugees, the promotion of peace through education, the sciences and culture in UNESCO, the peaceful uses of atomic energy, the care of the poor and hungry across the globe, the protection of our seas and international waters, the population control movements, and various political questions concerning particular countries. 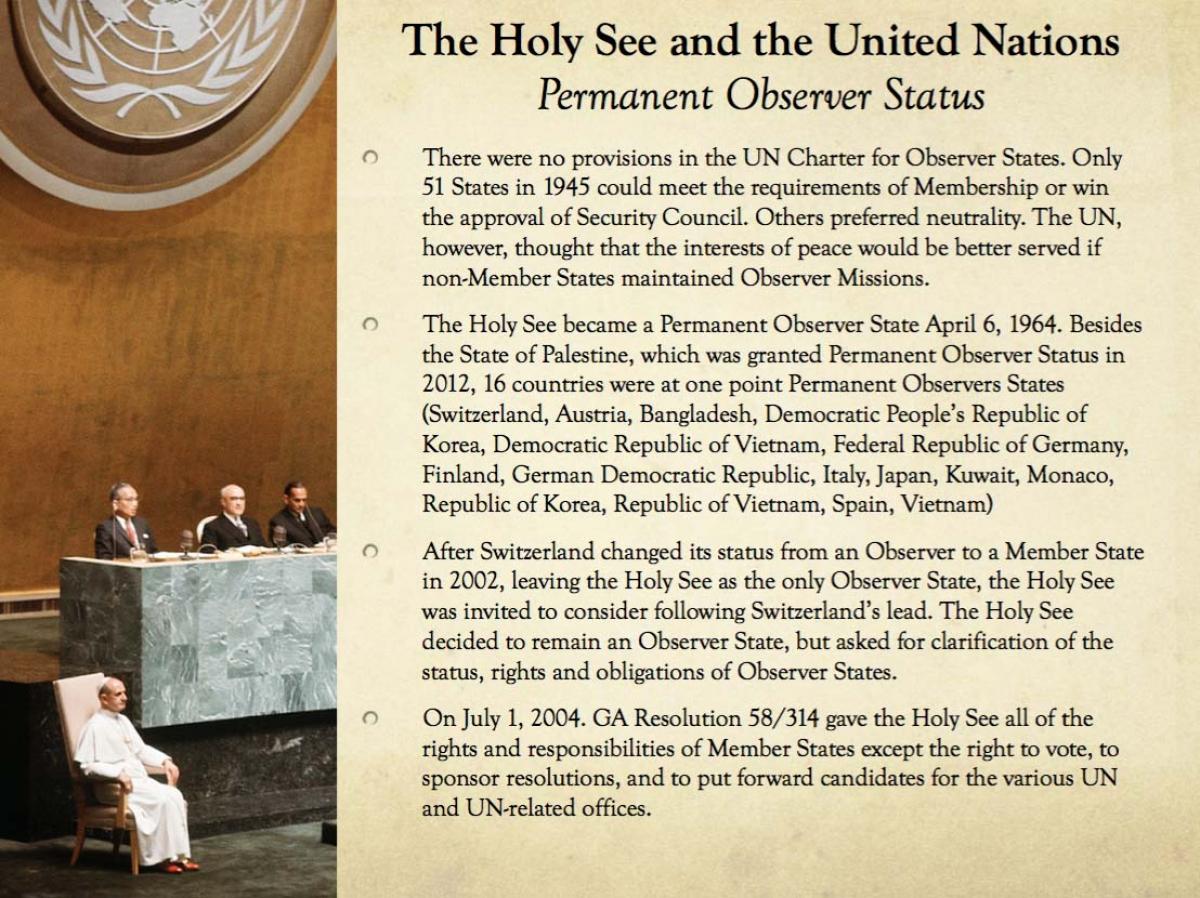 The Holy See as a Permanent Observer State

The UN had long encouraged those countries who were not members to become Observer States in the interest of improved communication and ultimately peace.

The Holy See became an Observer State on April 6, 1964. Eighteen different countries have been Observer States at some point in time. The status of Observer States, however, was not spelled out in the UN Charter, and so their rights and responsibilities were not very clear.

In 2004, the Holy See requested the General Assembly to define its rights and responsibilities as an Observer State. The General Assembly did so in Resolution 58/314, which determined that the Holy See has all of the rights and responsibilities of Member States except the right to vote, to run for office, and to sponsor resolutions. This is the status the Holy See maintains to this day. In 2012, the State of Palestine likewise became an Observer State. 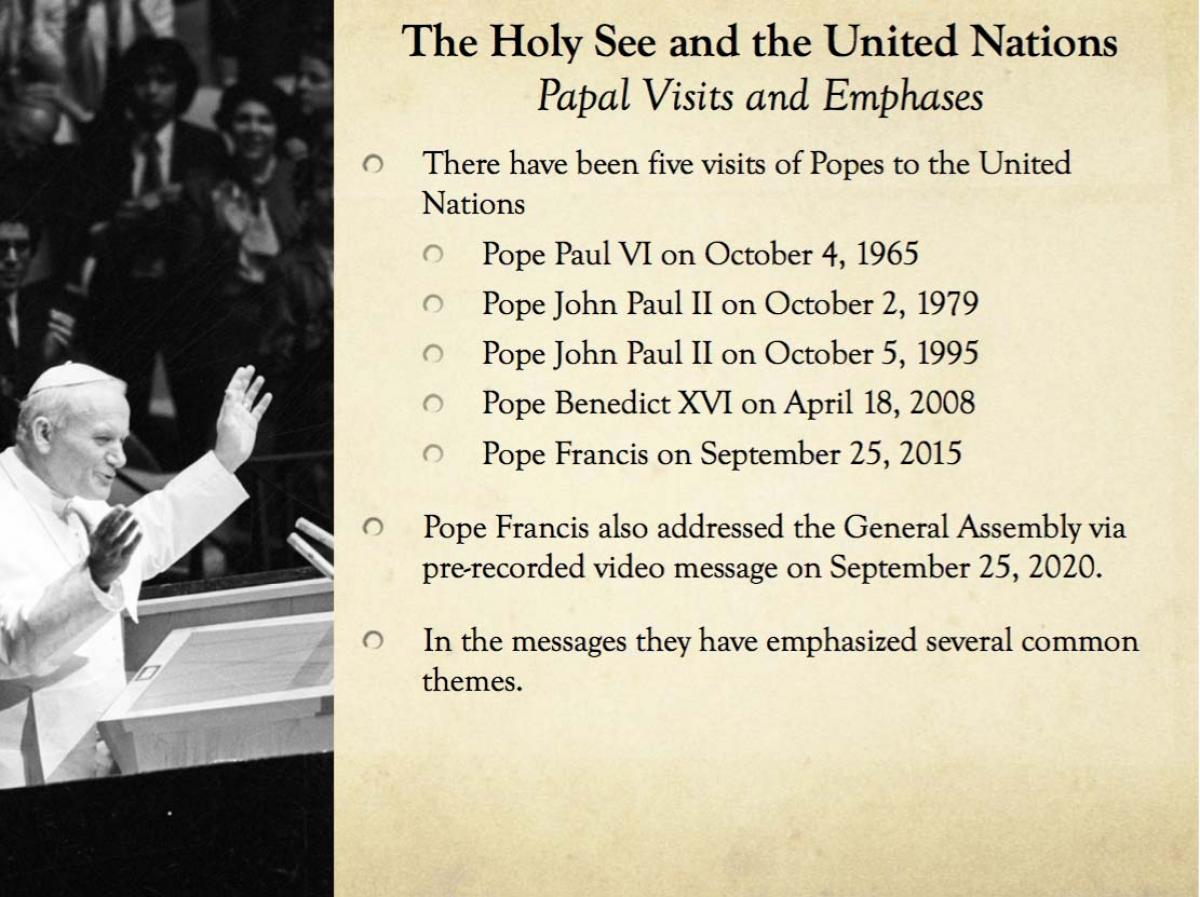 To highlight the interaction of the Holy See and the United Nations, we can look at the visits of the Popes and the words they said on those momentous occasions. There have been five papal visits: Paul VI in 1965, John Paul II in 1979 and 1995, Benedict in 2008 and Francis in 2015.

In their visits, the Popes have emphasized several common themes, which I think are helpful to review as we examine the approach of the Holy See at the UN. 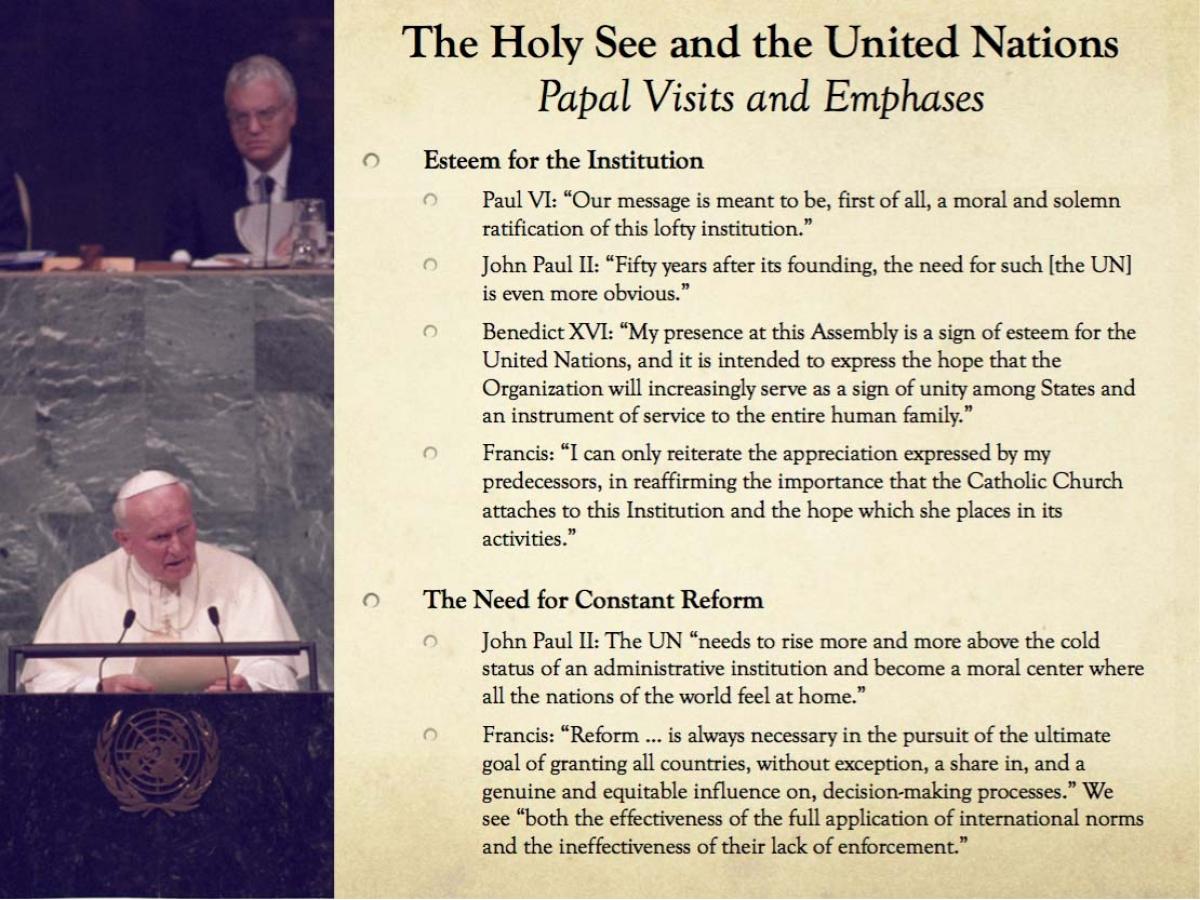 The first theme is esteem for the importance of the UN, which the Popes have said the world needs as a sign of unity among States and an instrument of service to the entire human family.

Parallel with that appreciation has been a constant papal call for it to be reformed, so that it will meet the hopes that the peoples of the world place in it. John Paul II stressed, for example, that the UN must become a true moral center, and Pope Francis that it must become more effective in applying international norms.

Third, the Popes have said that the UN is, in some way, a political and diplomatic reflection of what the Catholic Church aspires to be spiritually: truly catholic or universal, serving all peoples everywhere and where all peoples feel they belong.

The popes have also underlined that the UN is supposed to be a training school for peacemakers and peacebuilders in which people arrive as pupils and become and leave as practitioners. Every pope has called for the UN to live up to its Mission to prevent the scourge of war and to work tirelessly to promote peace among nations and peoples. 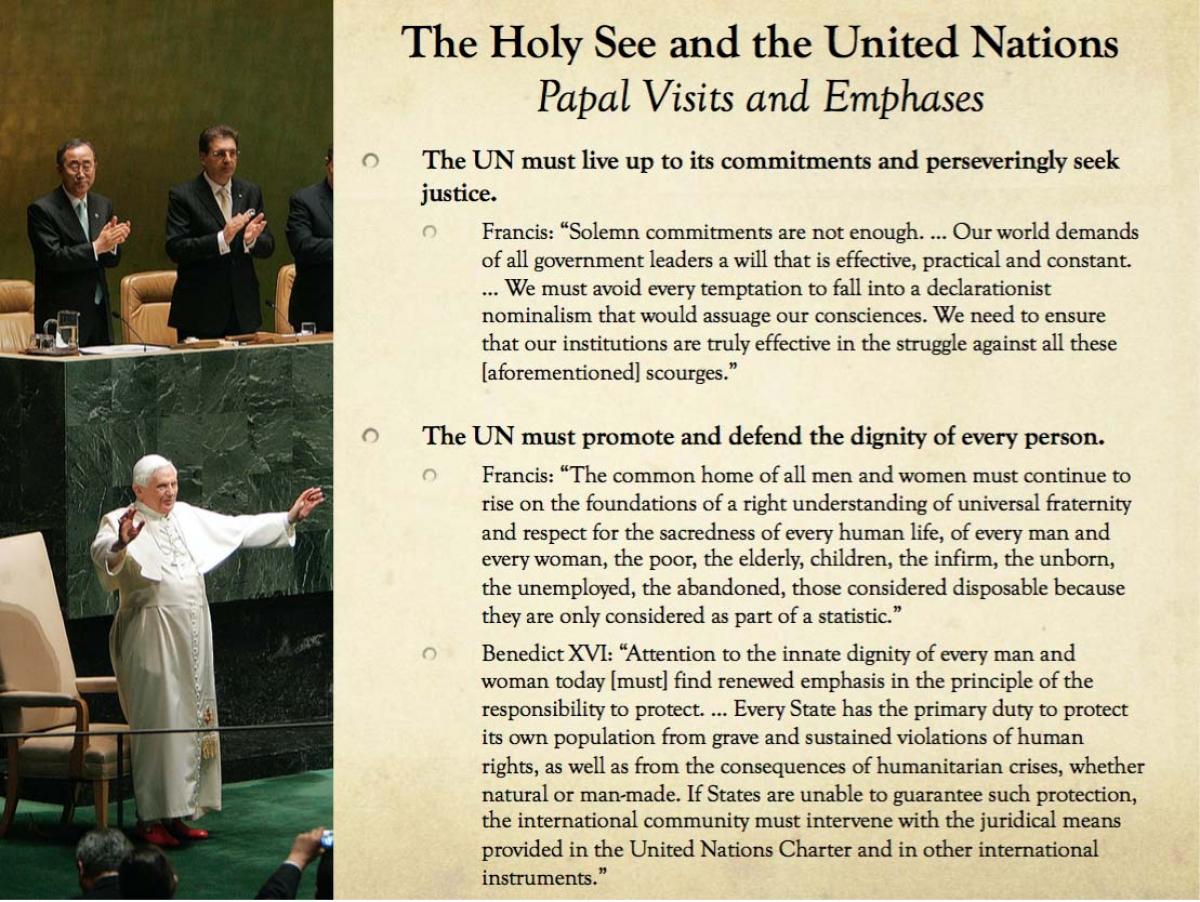 Fifth, they have insisted that the UN must perseveringly seek justice and that the international community must live up to the commitments it’s made. Pope Francis five years ago warned against the UN’s falling into what he termed “declarationist nominalism” — what we might refer to as virtue signaling — in which solemn statements are not backed up by deeds.

Lastly, the Popes have accentuated that the UN must defend the dignity of every person, especially those who are particularly vulnerable and whose rights are being trampled. 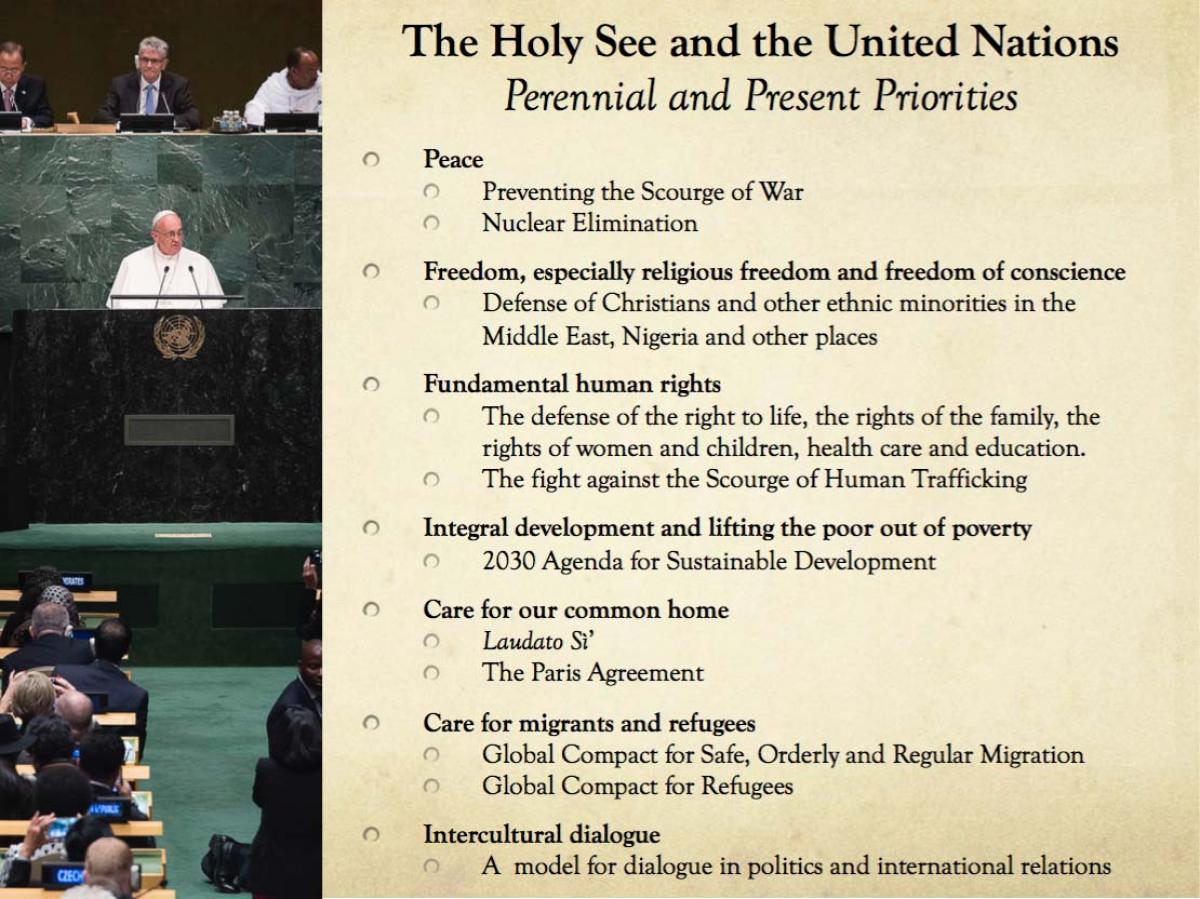 The present and perennial priorities of the Holy See Mission

Today the Permanent Observer Mission of the Holy See has various priorities at the UN here in New York, which parallel those at the other UN sites in Geneva, Vienna, and Nairobi. Some priorities come from items on the UN agenda. Others are our perennial priorities. I can list some, in a non-exhaustive way, just so that you get an idea of what we’re involved in.

We are constantly advocating and working for peace, whether with regard to various countries of conflict under discussion at the Security Council, or fighting for the elimination of nuclear weapons and the ethical culture of mutually-assured destruction that undergirds it.

We work for religious freedom, defending not just Christians but any religious or ethnic groups that are suffering harassment, discrimination, persecution, death or genocide on account of their faith.

We promote fundamental human rights, particularly through the defense of the right to life, the rights of the family, the rights of women and children, the rights to health care and education. We are also very much involved in the international efforts in favor of those caught in the snare of human trafficking for work or sex.

We are immersed in discussions for sustainable and integral development, to lift the poor out of poverty and help them become dignified agents of their own destiny.

We are perpetually involved in the UN’s work to care for our planet, not just in terms of the phenomenon of climate change, but also against pollution, waste and the other threats to our common home. Pope Francis’ encyclical Laudato Si’ has been highly influential in environmental discussions and played a major role in the 2015 Paris Agreement.

We continue to work very hard for refugees, migrants and internally-displaced peoples. From 2016-2018, we were heavily involved in the discussions here in New York on the Global Compact for Safe, Orderly and Regular Migration. Our contributions had a major influence on the eventual Compact.

Finally, we take part often in intercultural dialogue at the UN, which we believe can set the example of effective dialogue in politics and international relations. The United Nations represents the peoples of the world, 85 percent of whom believe in God. Therefore it is a good place where religious leaders and the international community can come together to discuss how the influence of religions on the culture of nations can contribute positively to the full development of persons and the world.

I’d like to summarize this talk by turning to what Pope Francis said in his encyclical Fratelli Tutti, published earlier this month. In talking about the UN’s 75th Anniversary, he said the UN Charter is an obligatory reference point of justice and a channel of peace when it is observed and applied with transparency and sincerity.

He likewise stressed, however, as Popes always do, the need for a reform of the UN so that the concept of the family of nations can be effectively realized.

He prophetically warned that the UN risks being delegitimized if its shortcomings — especially the ability for some wealthy countries to impose their economic will and ideologies on weaker nations — are not addressed and resolved.

So as we celebrate the UN’s 75th birthday on Saturday, we applaud its many successes on behalf of the peoples of the world, especially those who would ordinarily be left behind, but we likewise ponder the reforms it needs in order to be truly effective moving forward.

Thank you very much for your attention.

To watch this event, please click on this link. 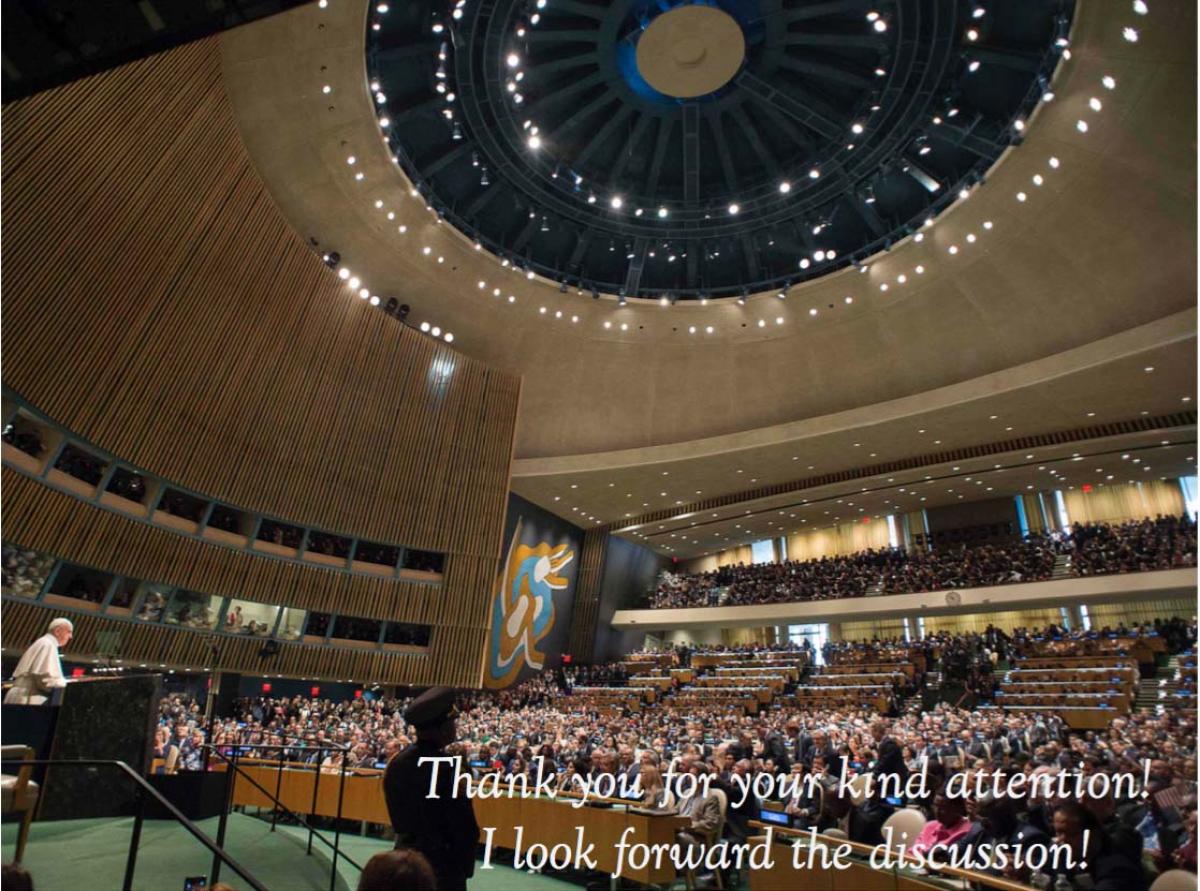