Our website is being upgraded and may show errors while we work. Please check back in a few hours.
Report of the International Law Commission on the work of its seventy-Third Session (Cluster II)
By H. E. Archbishop Gabriele CacciaApostolic Nuncio and Permanent Observer of the Holy See to the United Nations

My Delegation notes with appreciation the Commission’s adoption, on the first reading, of the draft articles entitled, “Immunity of State official from foreign criminal jurisdiction," together with its commentaries. The importance of this topic is to be underscored. The immunity of State officials is a crucial, long-standing principle of State sovereignty and international diplomacy, which must be respected in order to ensure peaceful and friendly relations among States.

If the immunity of public officials were not guaranteed, the threat of prosecution by other States could hamper those officials’ ability to comply with their public duties. The Holy See is no stranger to that phenomenon. In a recent case, a person indicted before the Vatican City State Tribunal presented a criminal complaint against the Vatican Public Prosecutor before the judicial authorities of a third State, for acts performed by the Prosecutor in his official capacity during the criminal investigation. The Holy See promptly invoked the immunity of the Vatican prosecutor though diplomatic channels. Fortunately, the Court of Appeal of the third State decided that the criminal investigation should not proceed.

As it regards the draft articles, my Delegation notes, in the first place, that the Commission decided to exclude the question of the immunity of public officials from the jurisdiction of international criminal courts from the scope of application of its draft.[1] We welcome that decision since the law in that regard is not yet settled. Moreover, it would appear that the legal regime of an international tribunal created by the Security Council under Chapter VII would be different from that of a treaty-based court.

Second, my Delegation notes that the Commission has not foreseen any exceptions or limitations, such as the ones foreseen in article 7, to the immunity ratione personae of sitting Heads of State, Heads of Government, and Foreign Ministers.[2] Although there have been some calls to prosecute sitting Heads of State, we believe that the Commission’s approach is eminently practical and realistic. If the highest State officials were under constant threat of prosecution, it would be impossible to conduct orderly relations among States. Moreover, in the case of international or civil conflicts, respecting the immunity of these officials would be a prerequisite for the negotiation of any cease-fire or democratic transition.

At the same time, my Delegation welcomes the introduction of some limitations to the immunity ratione materiae regarding the most serious crimes of international concern. We note, however, that draft article 7 reflects only a developing trend in the jurisprudence of some States and does not codify current customary law and practice.[3] Moreover, from a procedural point of view, linking the question of immunity to the nature of the presumed crime would tend to confuse a preliminary question – that of the immunity – with the merits of the case. In fact, if, in order to determine the existence of immunity, the State of the forum would need to assure itself, pursuant to draft article 14§3.b.i, that there are “substantial grounds to believe” that the official committed one of the crimes listed in article 7, the preliminary character of the immunities would be denied. Unfortunately, this could encourage prosecutorial authorities to initiate investigations and to adopt precautionary measures against foreign officials otherwise entitled to immunity. The future work of the Commission should focus on resolving these technical difficulties. From a practical point of view, we see some value in the view of those members of the Commission who maintain that not all crimes of international concern should necessarily generate limitations to the immunity ratione materiae.[4] Hence, a possible solution would be to limit the exceptions only to those crimes committed systematically or as part of a governmental policy, leaving to the territorial State the duty to prosecute its own public officials for singular crimes.

As regards the waiver of immunity, my Delegation would suggest to include, in draft article 12, the possibility of a partial waiver, so that the State of the official could allow the State of the forum to conduct the criminal investigation and, only at a second moment and, in light of the outcome of such an investigation, waive the immunity for trial.[5] Such a gradual approach would create confidence between the interested States and would favor the waiver of immunity.

My Delegation also welcomes the work of the Commission on the topic of the “sea-level rise in relation to international law.” We are particularly grateful for the “Second issues paper” prepared by the Co-Chairs of the Study Group,[6] as well as for the subsequent discussions of the Study Group itself. The challenge of understanding the multifaceted legal and technical issues posed by sea-level rise and finding adequate solutions to them, constitute a complex undertaking. However, at the same time, those challenges are not abstract legal questions. Since a fourth of the world’s population lives on or near the coasts, and given that most megacities are situated in coastal areas, about a quarter of humankind is threatened by rising sea levels. More than two-fifths of the States represented here, especially small island States and low-lying coastal States, are likely to be directly affected by rising sea-levels while many others are likely to be affected indirectly by the displacement of peoples and the loss of natural resources.

Given the magnitude of the humanitarian repercussions of rising sea-levels, my Delegation urges the Commission to give the utmost priority to the questions of legal protection for those persons affected by that phenomenon. In this context, my Delegation is grateful for the Co-Chair’s detailed analysis of the various legal frameworks that could be used to address the situation of  persons affected by rising sea-levels, including human rights law, international humanitarian law, refugee law, and environmental law.[7] Regrettably, it appears that none of those legal frameworks, either individually or in conjunction with the others, would provide adequate protection to those affected by changes in sea-level. As noted by the Co-Chairs, existing law is fragmented, non-specific, and often of a soft-law character.[8]  Therefore, we agree with their suggestion to develop a new legal regime to protect both those who will be permanently displaced within their own country and those who will be forced to migrate to another country due to rising sea-levels.[9]

Concerning the principles that would be applicable, at this point, my delegation would make only two observations. First, a “rights-based approach” would appear insufficient to protect the victims of sea-level rise, particularly in cases where there is no actual link between the persons in need and the States called to protect their rights. My delegation would, therefore, favor a “needs-based approach,” which would give priority to the duty to address the urgent but differentiated needs of the person requiring protection.

Second, although persons displaced due to environmental reasons do not fall within the internationally agreed definition of refugees, there is no doubt that the situation of those forced to leave their country of origin due to rising sea-levels is closer to that of the refugees than that of the other models examined. Hence, the provisions of Refugee law could provide a useful model to develop new norms for the protection of those affected by rising sea-levels, including the recognition of their right to request asylum, the applicability of the principle of non-refoulement and the right not to be punished for the illegal entry.

My Delegation takes note of the Co-Chairs’ work on question of Statehood as it relates to rising sea-levels, which included an overview of the legal status of the Holy See in international law.[10] Unfortunately, the Co-Chairs’ study focuses mostly on the question of the so-called criteria for the creation of a State. Although, from an academic point of view, the traditional criteria of territory, population, and government provide a useful analytical tool, the fact is that those criteria do not reflect State practice. Many entities have been recognized as States well before they fulfilled one or more of those “criteria” while, at the same time, there have also been entities which unquestionably fulfilled those criteria but which were not recognized as States by the international community. Under current customary international law, recognition is left at the discretion of each State. There are no restrictions to the recognition of other entities as States and, conversely, there is no obligation to recognize other entities as States, even if they fulfill all the traditional criteria. In fact, in most countries, recognition is a political act of the executive, not subject to any judicial control.

Regarding the consideration of Holy See’s legal personality in the issues paper, my Delegation would also observe, first, that the treatment of the question of recognition might be in a sense misleading. Indeed, from the early Middle Ages and, therefore, well before the birth of the current Westphalian system, the Holy See has had an autonomous legal personality and has been active in international affairs, concluding treaties and sending representatives to other sovereigns. The Holy See was in fact active far before most current States came into being. Actually, some States represented here trace their origins back to the moment when a monarch was crowned or recognized by the Pope. In that context, the international personality of the Holy See was never confused with that of the Papal States. Therefore, a historically accurate inquiry should not ask when the Holy See was recognized, but, rather, when it was that the Holy See recognized other States.

Second, it is recognized that the Holy See participates in the international community on equal basis with all other States, independently from the existence of the Vatican City State. For example, the Holy See is an Observer State at the UN.  It is also a State party to the Vienna Convention on Law of Treaties and to the Vienna Convention on International Relations, which are open only to ratification by States. Additionally, it is a Member State of the International Atomic Energy Agency and of many other international organizations. Lastly, the Holy See enjoys sovereign immunity, as all States do. However, the Holy See’s activities in these areas are not related to the exercise of territorial jurisdiction over the Vatican City State or over its limited population, but rather to its particular mission. Hence, we would agree with Study Group that the experience of the Holy See does not provide a valid analogy to that of the States affected by rising sea-levels.

[1]   Draft articles on the Immunity of State officials from foreign criminal jurisdiction, art. 1.3. 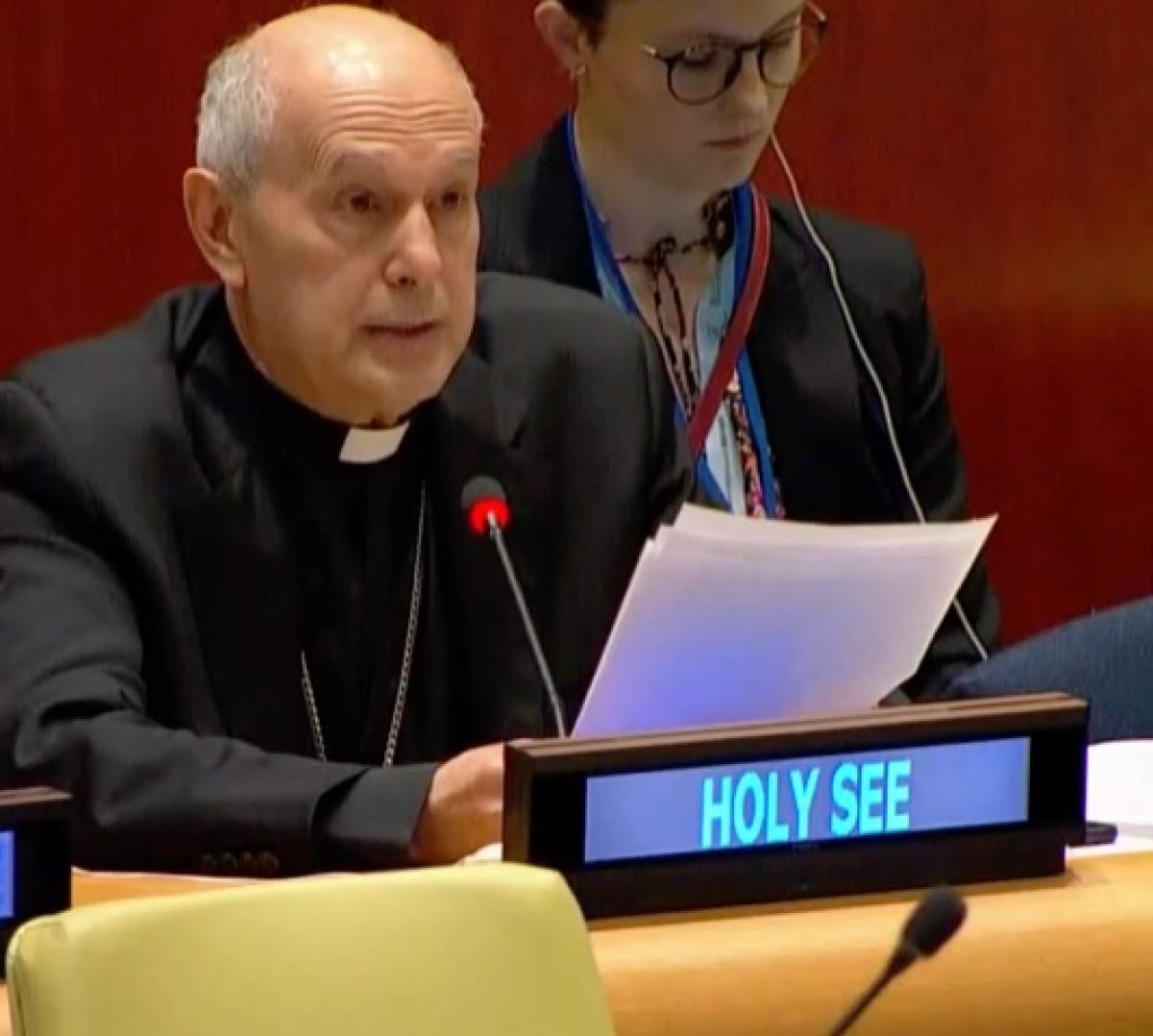