Our website is being upgraded and may show errors while we work. Please check back in a few hours.
February 12, 2021 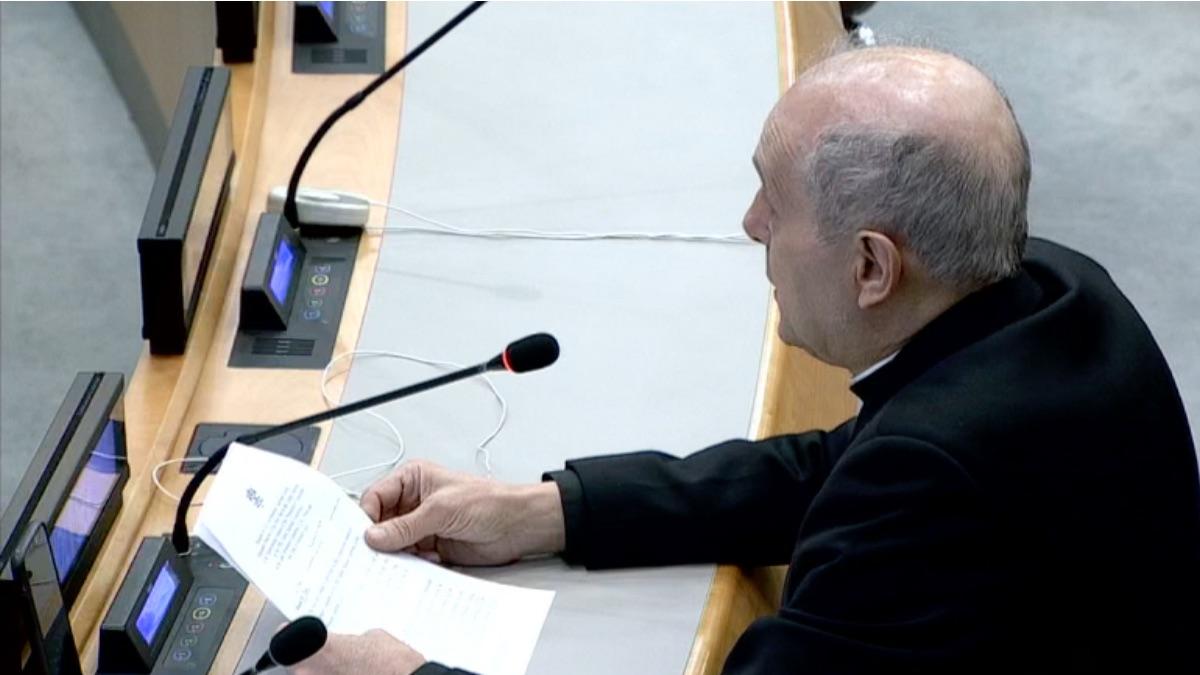 On February 8, Archbishop Gabriele Caccia, Permanent Observer of the Holy See to the United Nations in New York, spoke at the Organizational Session of the Preparatory Committee for the Fifth United Nations Conference on the Least Developed Countries (LDC5 PrepCom). The meeting was held at United Nations Headquarters.

In this statement, Archbishop Caccia said that the new Programme of Action should build on the objectives of the Istanbul Program of Action as well as respond to the new challenges arising from the COVID-19 pandemic. Archbishop Caccia called for the prioritization of agriculture and rural development to promote inclusive and sustainable growth in the LDCs, and noted the Holy See's contribution to the International Fund for Agricultural Development (IFAD) to help end hunger in LDCs. Archbishop Caccia also called for greater attention to be paid to increasing the resilience of LDCs to climate change, environmental degradation and natural disasters. 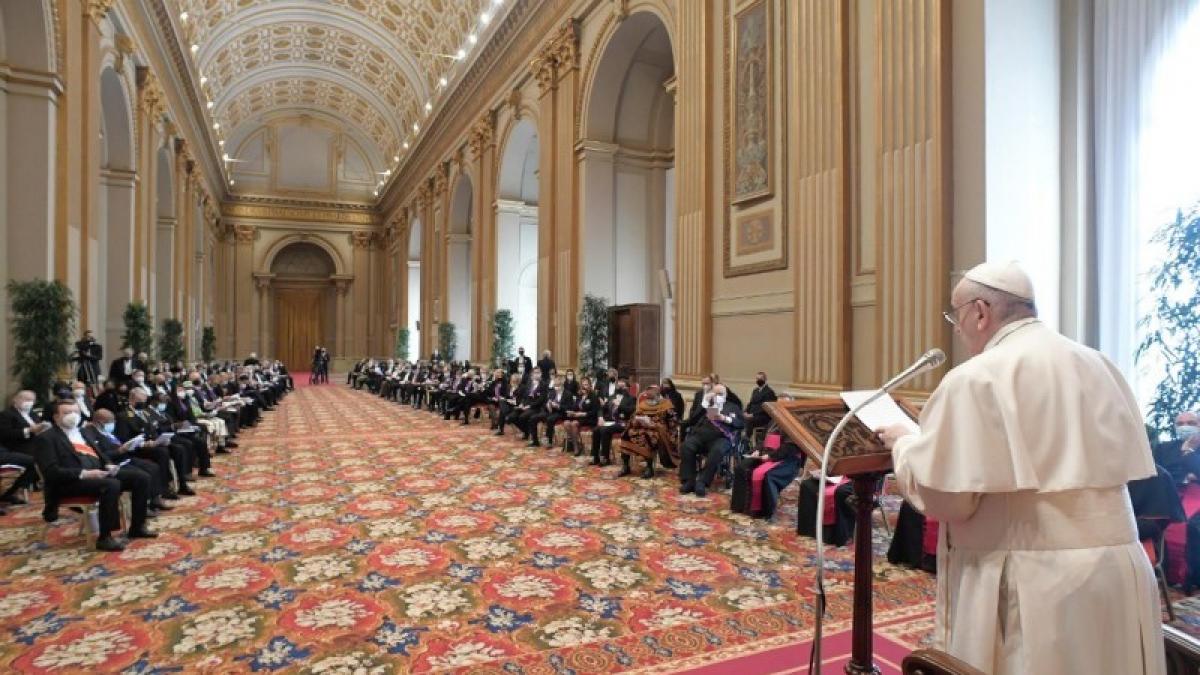 Pope Francis addresses the members of the Diplomatic Corps accredited to the Holy See in the Benediction Hall of the Apostolic Palace in the Vatican.

On February 8, Pope Francis addressed the members of the Diplomatic Corps accredited to the Holy See.

Building on the theme of crisis he identified in his December 2020 address to the Roman Curia, the Holy Father spoke about five crises brought to the fore by the COVID-19 pandemic: health, environmental, economic and social, political, and anthropological.

He mentioned several items specifically tied to the work of the Holy See at the United Nations.

On the environmental crisis, he expressed hope that the "United Nations Climate Change Conference (COP26), to take place in Glasgow next November, will lead to effective agreement in addressing the consequences of climate change."

When addressing the economic and social crisis, he underscored that "the Holy See, as a member of the Executive Committee of the United Nations High Commissioner for Refugees (UNHCR), remains faithful to the principles laid down in the Geneva Convention of 1951 on the status of refugees and in the Protocol of 1967, both of which set forth the legal definition of refugees, their rights and the legal obligation of states to protect them."

Finally, he mentioned the social crisis caused by the vast movements of migrants and refugees. He expressed the Holy See's "deep concern over the situation of displaced persons in different areas of the world," while noting the "important efforts made by the United Nations in seeking solutions and concrete proposals to address in a consistent manner the issue of forced displacement."

The Holy Father's full address can be found here.

NEW YORK — Three new collaborators have arrived at the Holy See Mission. They are Nadja Wolfe, Johanna Hohenberg, and Portia Berry-Kilby. They will support the Mission's work across many different areas. 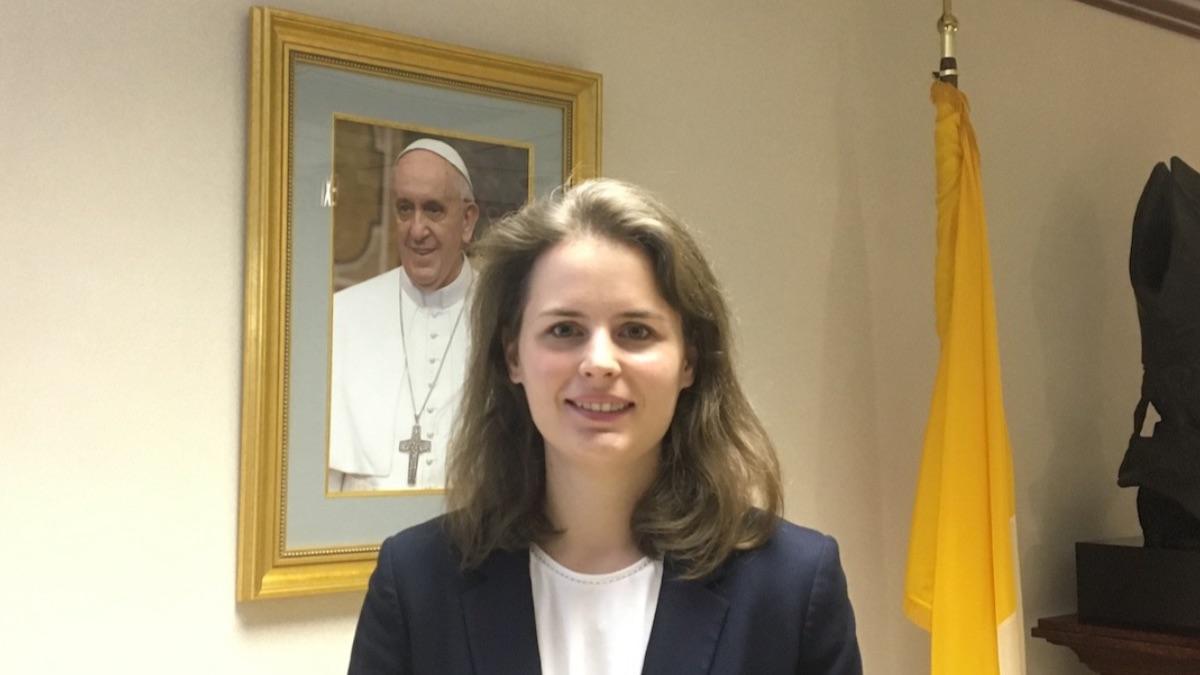 Johanna Hohenberg is a native Austrian and German but was raised mainly in the UK along with her three siblings. Johanna has an undergraduate degree in History from the University of Glasgow and a Master's of Advanced International Studies from the Diplomatic Academy of Vienna.

Johanna previously worked for ADF International that works to promote religious freedom, the right to life, and marriage and family. Asked about what drew her to the Mission, Johanna said "I wanted to combine these topics that are so important to me with my education in international relations and diplomacy. Working for the Holy See in the multilateral sphere does exactly that!" Johanna is "excited to learn about the other priorities and interests the Holy See has Internationally and how we are able to further the common good through the UN."

Johanna will be covering areas related to the Second, Third, and Sixth Committees of the UN General Assembly as well as the ECOSOC. Diving straight into the work, Johanna reflected: "I didn't expect to be thrown right into the real UN work, but am glad that I was as I'm more of a learning-by-doing type."

A newcomer to New York, Johanna has been using her first few weekends to explore the city. She is engaged to be married in October in the UK and hopes her fiancé, Vincenz, will be able soon to join her here in New York. 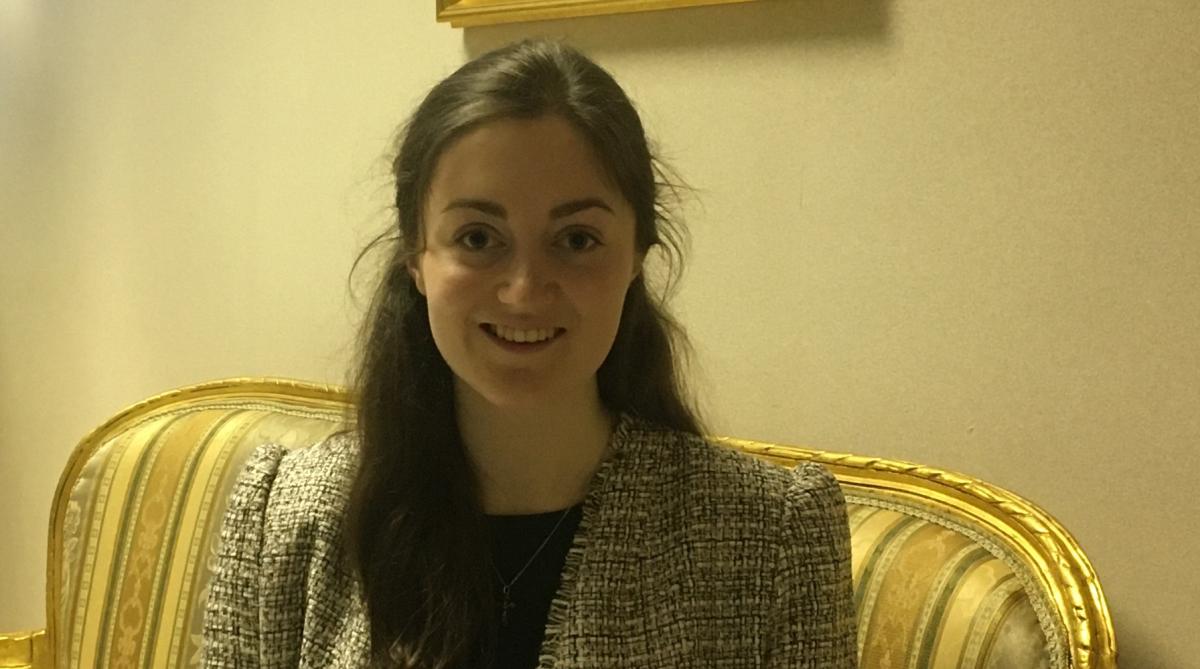 Portia Berry-Kilby comes from a village in Leicestershire, UK, but she is no stranger to the United States or the Holy See Mission. She graduated from Harvard College where she majored in Near Eastern Languages and Civilizations, with a focus on Arabic and politics. During her undergraduate studies, Portia interned with the Holy See Mission and primarily covered the work of the Security Council. "It's a joy to be back supporting the Mission's work," she said. "I thoroughly enjoyed my time here as an intern, and I'm excited to get stuck in on various new projects."

In the upcoming months, Portia will be working on the Mission's communications, archives, and databases. "I come from having worked in political consulting, with a focus on polling data. I'm looking forward to the more generalist approach this new role affords, while also using my political consulting experience to get to the heart of an issue and offer solutions. I'm grateful to have new projects to work on and to support many areas of the Mission's work."

Asked how she was finding her first few days at the Mission, she said: "As a former intern, I definitely feel a slight sense of déjà vu. But this is helpful as it means I can just crack on! Lots to learn still, of course, but that's half the fun."

Nadja Wolfe grew up in Massachusetts, the second of eight children. She double majored in Russian Area Studies and Theatre Arts, with a minor in Poverty and Human Capability, at Washington and Lee University. Later, Nadja attended William and Mary Law School where she obtained her Doctor of Law.

Nadja has been working for the World Youth Alliance since 2014. Nadja will collaborate with the Mission on issues related to women, children, youth, aging, life, and health. In particular, Nadja will assist the work of the Holy See Mission with regards to the Commission for Social Development and Commission on the Status of Women. "I expect the next few weeks to be busy, particularly with the Commission on the Status of Women which is very involved and touches on many different topics."

Nadja views her collaboration with the Holy See Mission as "working in a deeper way on many topics I've been covering for several years. In that sense, it is familiar. On the other hand, there are intricacies, processes, and elements I did not expect, which have been interesting." 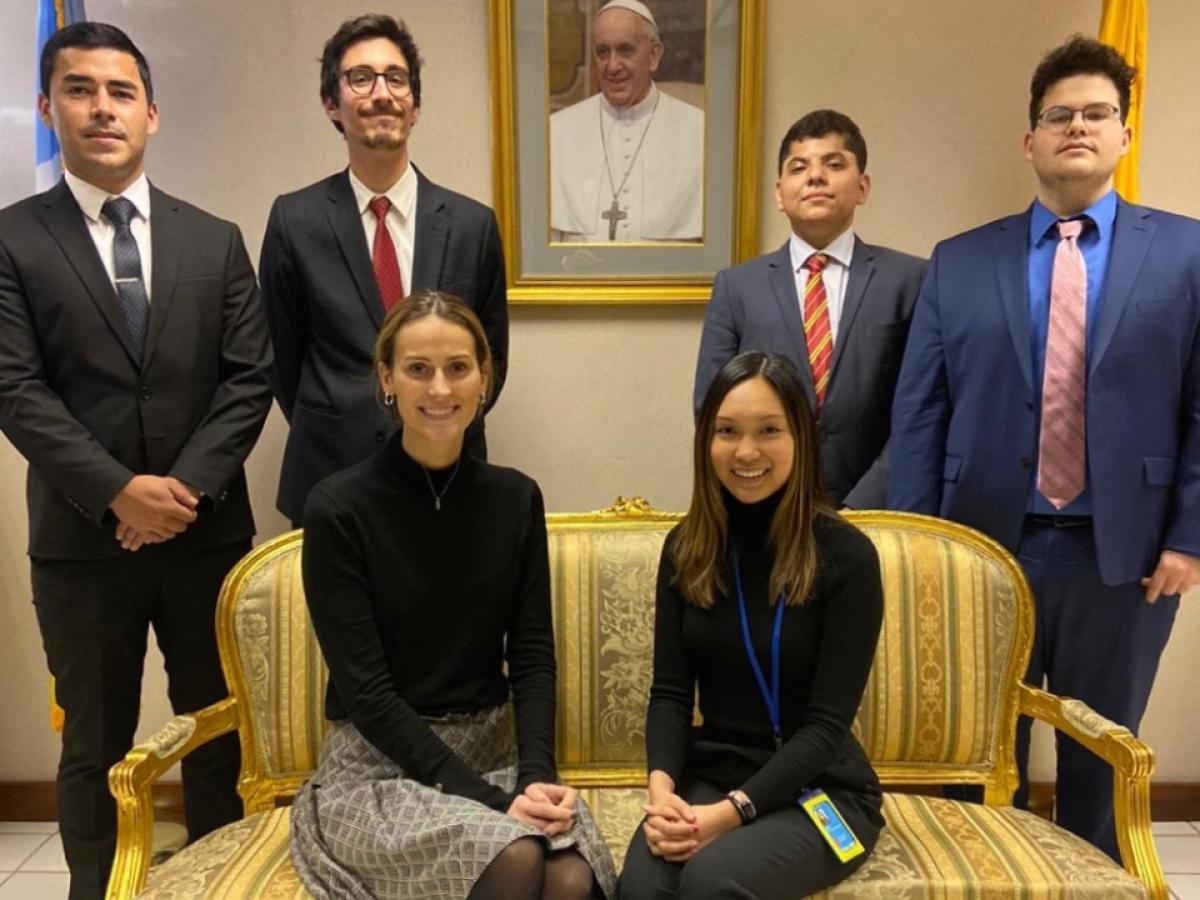 NEW YORK — On January 11, the Holy See Mission welcomed four new interns for the January through May 2021 Session of the United Nations.

Kayla Auza, Juan Pedro Dubié, Jose Melendez-Garcia, and Andres Polanco Achury have joined Jean Maloney and Pedro Perez who have been interning at the Mission since September. The new interns hail originally from the United States, Argentina, Nicaragua and Colombia, respectively.

Kayla Auza comes from Texas and is currently an undergraduate at Fordham University, majoring in American Studies with minors in Russian and History. She served as the President and Founder of Fordham University’s undergraduate chapter of Catholic Relief Services where she spearheaded various advocacy projects on human trafficking, migration, poverty, and climate change. Kayla applied for the Mission’s internship not only to synthesize her interests of diplomacy and Catholic Social Teaching, but also to further the Holy Father's belief that “the royal road to peace is to see others not as enemies to be opposed but as brothers and sisters to be embraced.

Juan Pedro Dubié was born in Argentina but has lived in Madrid, Spain, for most of his life. Juan Pedro has an undergraduate degree in History from the Universidad Complutense de Madrid and a Master's degree in International Relations and Diplomacy from the Diplomatic School of Spain, specializing in Latin American Diplomacy. Juan Pedro is involved in the Catholic Schoenstatt movement and hopes to grow in his faith while at the Mission as well as develop his professional vocation.

Jose Melendez-Garcia will graduate from Keiser University in May with a major in Political Science. Coming from Nicaragua, Jose says he has had "the opportunity to witness the role of the church in bringing peace and serenity at time of conflict." The Church's call to peace motivated Jose to apply for the internship.

Andres Polanco Achury comes from Colombia. He earned his bachelor's degree at Caldwell University in New Jersey with a major in Theology and a minor in Philosophy. He is currently studying for his Master's at Seton Hall University in the School of Diplomacy and International Relations, focussing on International Organizations, Public International Law, and Human Rights. Andres' interest in international affairs, as well as the UN's role in Colombia, led him to apply for the internship.

Reflecting on the past few months, Jean and Pedro shared some highlights of their time so far:

Jean Maloney, from Maryland, has covered the work of the Security Council and Fourth Committee on Decolonization and Political Affairs. She said that the work has "fit perfectly with my academic and career interests, but my understanding of global geo-politics has also immensely increased covering regions I had little familiarity with prior." After the internship, Jean intends to study for a Master's in Middle Eastern and Islamic Studies.

Pedro Perez, a Cuban native who emigrated to Miami when he was nine and came to the Mission after saving in Ukraine for the Peace Corps, said that "the Mission has been like an extended family to me. Sometimes even our work becomes a 'family' moment because we cover the same events, as was the case during the General Debate week." In the Fall, Pedro covered Fifth and Sixth Committee issues in the General Assembly and in the Spring is working on the ECOSOC Commissions.

The new interns received four days of intense training at the beginning of their term, which covered Holy See Diplomacy, the work of the Holy See Mission at the UN, the workings at the UN, various writing exercises to help them learn the literary form necessary for diplomatic reports, briefings from the staff members on their areas of expertise and more.

Those interested in finding out more about internships of the Holy See, or applying for future sessions, are encouraged to visit the Holy See Mission’s website and click the link for internship program. We are currently accepting applications for the Fall 2021 cycle. Applications will close April 15th. 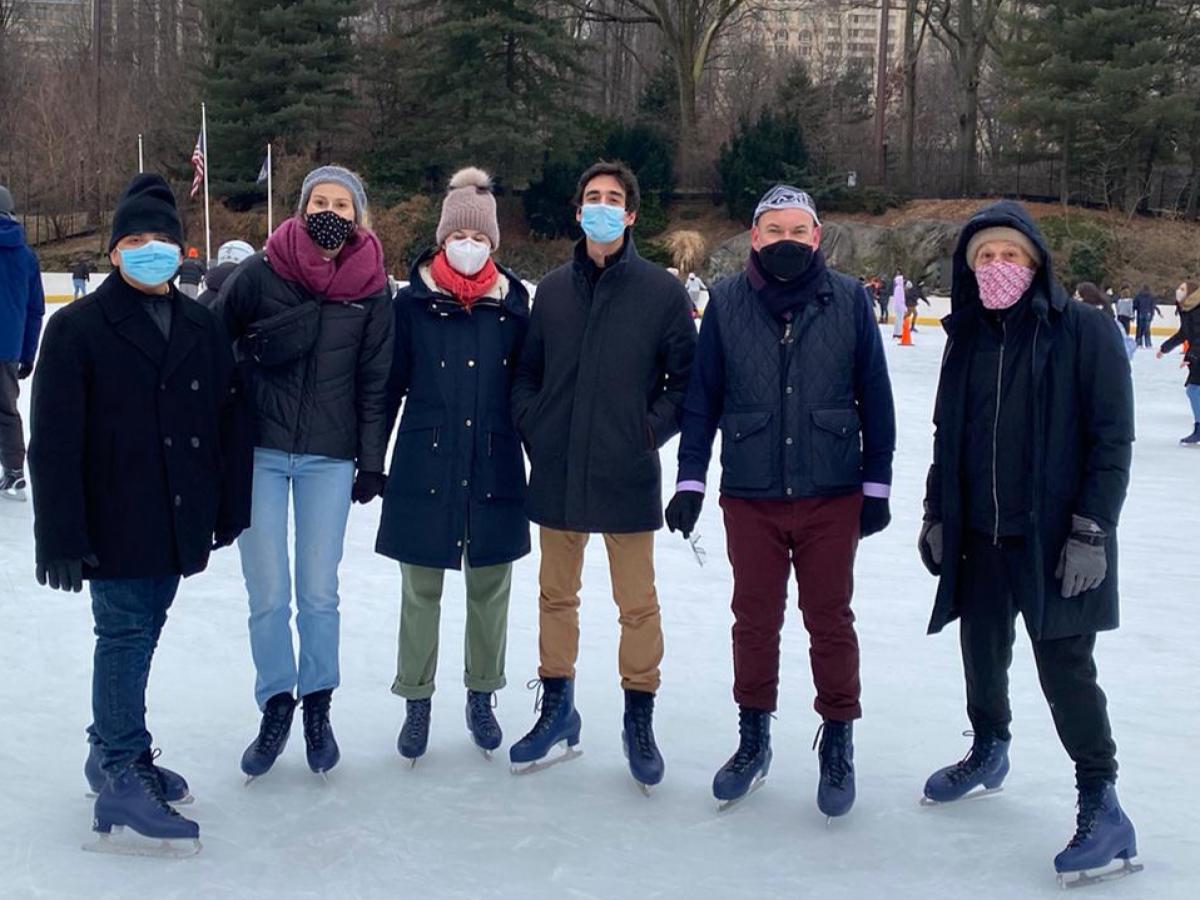 WINTER EXPLORATIONS — Several members of the Holy See team recently took advantage of the Big Apple's wintry weather to hit the ice-skating rink at Central Park. The consensus was that future Olympic contenders have nothing to fear.